Children of the Corn V: Fields of Terror

Can I hate a movie for failing to live up to expectations when the movie is in a series that barely has expectations to begin with? I feel like that's the case with Children of the Corn V: Fields of Terror. This is a franchise extension film that barely does anything to extend the franchise. It's another group of creepy kids led by a possessed youngin' who serves "He Who Trots Along the Stalks" while he spreads the gospel of this evil god. But it doesn't do anything new at all. 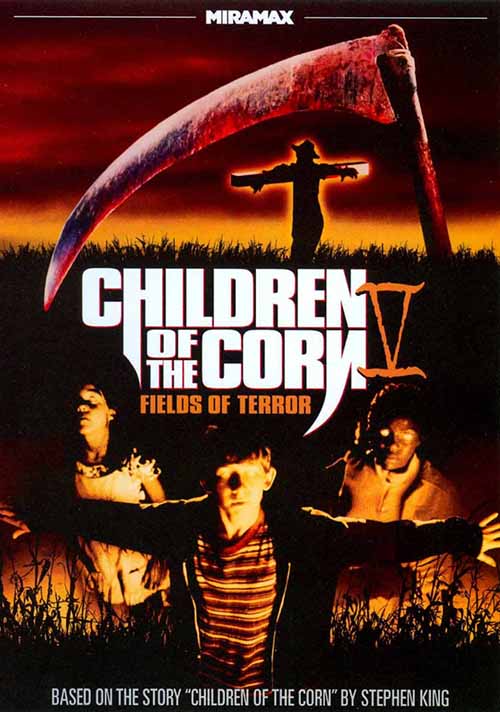 That's an issue I have to wonder about because, if the film doesn't do anything new with the material, what's the point of it all? As dumb as Children of the Corn III: Urban Harvest might have been (and it was very dumb), it moved the films out of their staid setting and added in a Corn Kaiju (which is awful but still, points for creativity). Children of the Corn IV: The Gathering actually moved away from all the connections to the previous movies and tried to pitch a new child preacher cult and posited the possession as a disease. It, too, was stupid, but again, points for creativity.

But Fields of Terror just goes back to the well. It leans on the basics of the original Stephen KingRIsing to fame with the release of his first book, Carrie, Stephen King is one of the most prolific, and most successful, American authors (in any genre, not just horror). short story, even though that material was already played out by the end of Children of the Corn II: The Final Sacrifice (which wasn't final), and now we're just treading water, using up the same plot points over and over again with little substance behind it. I knew the earlier films would be better than the latter once, I just didn't realize how bad it would actually get.

In this sad, fifth film in the series, we first are introduced to Ezekial (Adam Wylie), a dumb kid wandering through the corn fields at night when he comes upon a fire. The kid is drawn to it, mesmerized even, when suddenly the fire turns green and shoots at Ezekial. Why is there a fire in the corn rows? I guess its supposed to be an allusion to a burning bush because at that moment the kid becomes the host for He Who Stumbles Into the Corn, born again as the evil preacher for the next cult of kids.

We then cut to four college students driving along the backwoods of Middle America. This crew -- Stacy Galina as Allison, Alexis Arquette as Greg, Eva Mendes as Kir, Greg Vaughan as Tyrus -- are taking the ashes of their dead friend (who was also Kir's boyfriend) so they can be spread somewhere special. They're following along behind two other friends, Angela Jones as Charlotte and Ahmet Zappa as Lazlo, but these two are killed by the corn-worshiping kids (for very little reason, it should be noted), and then soon after our main crew of four get stranded when their car crashes, breaks down, and is later set on fire. This leads them to explore the crazy town nearby, find out about the corn cult of kids on the outskirts, and that's when Allison realizes she's heard about this cult before, back when her brother joined with these nut-bars. Now Our lead girl wants to find a way to save her bro, and get him out of the cult, before its too late. 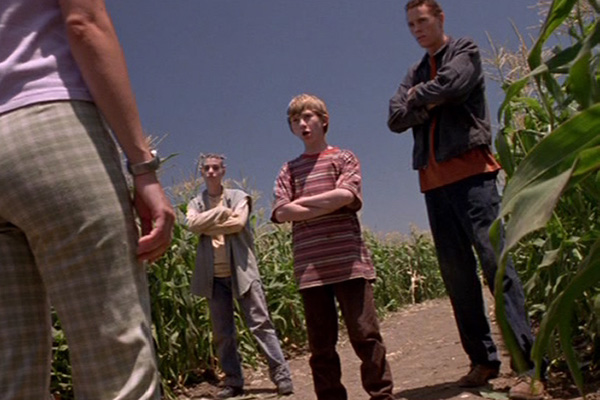 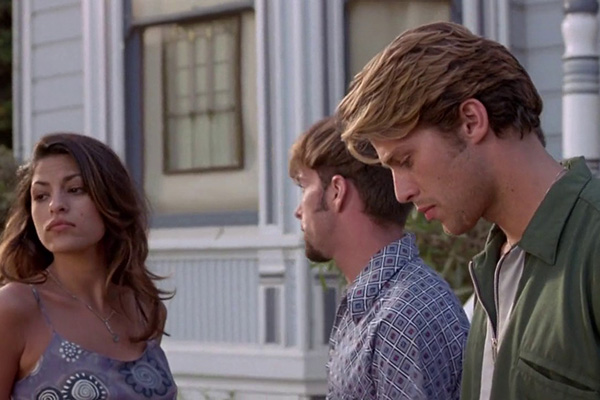 If you've watched any of these films before you know the basics of what will happen. Our heroes will run into the cult, have some bad encounters, and then, one by one, they'll get bumped off by the kids in less-than-creative ways, all to sate the blood lust of the stupid corn god. The issues I have are numerous, but the biggest question is: why? What, at this point, is the corn god even trying to do. He builds a cult of kids here this time, but then just leaves them on the outskirts of town. If his goal was really to wipe away adults (as was the case if the first three films) then why have they left the main town alone all this time and not gone through it and killed all the adults?

But then, it's not as if the motivations of the cultists make any sense. All of these colleges students should be too old to be part of the corn cult, and yet, time and again in this film, the cultists try to recruit them, to bring them into the fold. What's the point of this? They're too old to meet the minimum age of the cult (18 years, of course), so what, they'll join up and then immediately have to be sacrificed? Why not just kill them, then? Why go through the trouble of trying to recruit them?

Meanwhile, the possession story of Ezekial barely registers because Ezekial barely registers as a character. He's always on the outskirts, kind of like Issac in the first film, someone seen, and occasionally heard from, but he never actually does anything (instead leaving that up to his lackeys). At least in the previous movie, when one of he kids was possessed by the corn god, there was some though about maybe he could be freed so his soul could be saved. There's none of that here, and Ezekial remains little more than a cypher throughout the film.

Not that our "heroes" are really any better. They're all the basic Slasher film cookie-cutter characters, dropping into the film to fill roles and then get killed. None of their plot lines actually get resolved because the film doesn't have time for any of that, so they talk about what their motivations will be and then, before the can do anything about it or learn more about themselves, they get killed off. It doesn't matter what they want or desire because they won't survive to the last reel. 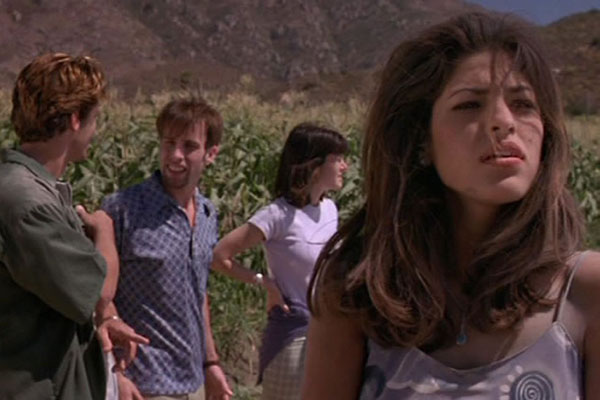 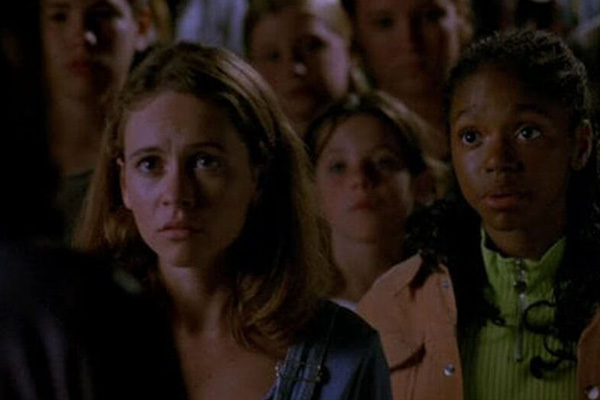 And the ending. Ugh. After everything, with Allison meeting her brother again, finding out he has a wife, that they're expecting a kid and then, once everyone around Allison dies (because of course they do), she eventually tracks down his wife and adopts her kid. In the most expected fashion we then close in on the baby's eyes and, yes, see he's possessed by the corn god. SO what was the point of any of this? Nothing was accomplished, the corn god wasn't even defeated, and everyone died for absolutely nothing.

This film, in short, is just a waste of time and resources. It manages to do absolutely nothing new with the Children of the Corn franchise, fails to do anything with its own story, and in the end accomplishes nothing. I've never felt so let down by a film, especially one that knew was going to be bad, but Children of the Corn V: Fields of Terror somehow manages it. We've already had more than one film in this series that I wouldn't recommend to anyone, but even among those films, this fifth edition is the absolute pits.