One Last Time at College (For Now, at Least)

Community was never one of the "big" shows, not when it came to ratings. But fans of the show were dedicated to it with fervor. Hell, even today there are legions of fans that still discuss the show, that watch the posted clips of the show on YouTube (even though those are just clips of old episodes everyone has already watched hundreds of times before). The fan base for the show has always been rabid; small, but very rabid indeed. So when the show was canceled by NBS (after years of threats), fans of course started a campaign to find the show a new home elsewhere. 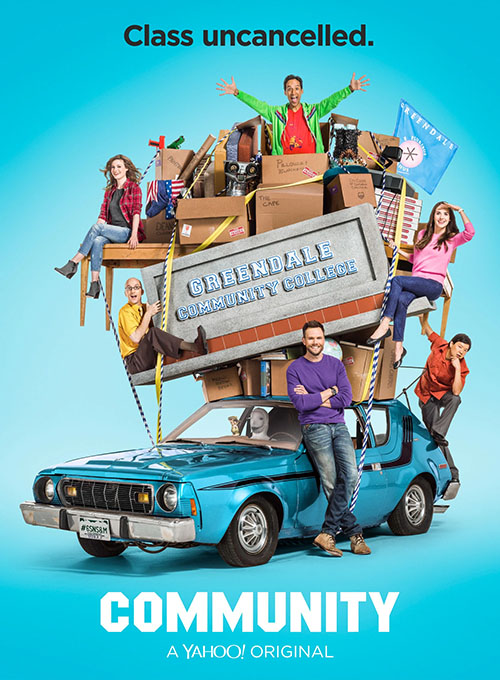 Campaigns like this have worked before, and since. Arrested Development pulled that feat off (although some would argue it really shouldn't have), as did Nashville (a show I never watched). More recently we also had the case of Lucifer, brought back by Netflix after Fox killed it. Finding Community a home elsewhere after it was ejected by NBC didn't seem like a long shot, and in fact the show was very quickly snatched up. Everyone was just surprised by the new home: Yahoo Screens.

Unfamiliar with Yahoo Screens? Of course you are because that streaming service only lasted a few months, just long enough to air the sixth season of Community. The service launched to much fanfare and then quickly fizzled out when everyone realized the only show they had that anyone cared about was Community, and that show was so expensive to produce for the fledgling Online network that it basically killed the service entirely. Up and gone in a flash of light, and then all anyone could remember was that it vaguely existed -- that's both a comment on Yahoo Screens as well as on the sixth season of Community.

Let's be honest, the sixth season of the show is nowhere near up to the heights of the classic seasons. There are any number of reasons why Season 6 didn't work, but the primary problem with it is fatigue. It's rare for shows to run more than a few seasons before they start to run out of material, and even if the cast of Community had remained on the show through all six seasons it's still likely that the show would have started to run out of gas at this point. There are only so many stories you can tell about a group of people, so many ways you can bounce characters off of each other, and then you either have to find new approaches to the material or you have to call it a day and move on. Community tries to keep doing its thing but, by this point in the run, it clearly was just running on fumes.

Certainly the cast changes didn't help matters much. Of the original cast, only Jeff, Britta, Abed, and Annie, and the Dean remained. Chevy Chase was fired from the show during season four, Donald Glover's Troy left in season five, sucking a lot of energy out of the show at the same time, and then Yvette Nicole Brown's Shirley left before sixth season. Even with stories they still wanted to tell, it would be hard for any writing staff to work around the loss of half the cast. That's too big a change to the dynamic, to big a wound to recover from. Hell, Troy alone hobbled the show as the back half of season five wasn't anywhere near as strong as the front half, but to lose Shirley as well, that was the finisher. 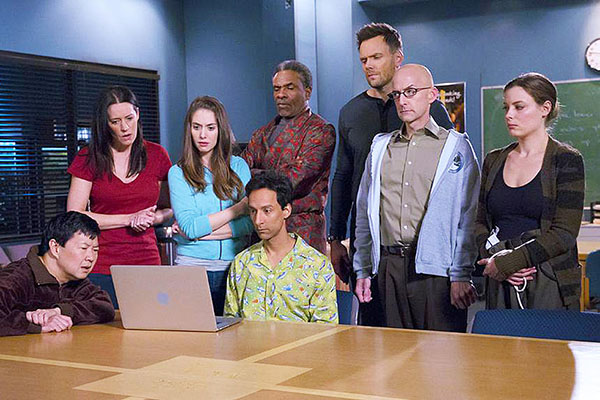 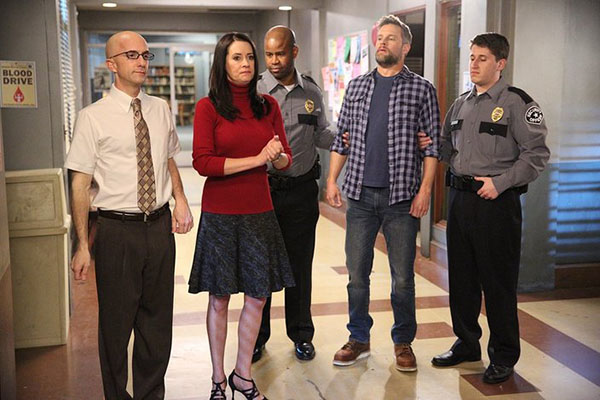 Of course, we did also lose Jonathan Banks's Professor Buzz Hickey, the Criminology professor who didn't make the move to Yahoo Screens (although he was referenced once). While not an integral part of the cast, only showing up for one season, his dry energy did at least bandage over some of the losses in the cast. Without him though, the show had to introduce two new characters: Paget Brewster's Frankie Dart, a consultant for the school who ends up becoming part of the group, and Keith David's Elroy Patashnik, the school's new IT guy. Both are nice enough characters but they lacked the personality and familiarity of the original cast, and neither of them were really given stories to cement their place on the show. They were filler, characters added to increase the ranks of the main cast, but it just wasn't the same.

It was clear the show struggled because, so often, it just didn't have any stories to really tell as many of the episodes are just retreads of previous episodes. There's "Basic Email Security" where the group has all their deepest secrets revealed and they end up fighting amongst themselves, you know, just like in "Cooperative Calligraphy" and "Intro to Felt Surrogacy" and "Cooperative Polygraphy". There "Advanced Safety Features" which featured the return of Subway guy Rick for another episode of recycled gags while the show tries to sell us products. And there was "Modern Espionage", yet another paintball episode to follow up "Modern Warfare" and "A Fistful of Paintballs/For a Few Paintballs More". None of these episodes were bad but they also weren't really fresh either. They just tread the familiar ground the series had tried before, in much the same way season four had done, and in that same regard it didn't work. It lacked the spark of the show at its best.

That's not to say the show was completely bereft of new stories; a couple of episodes certainly did stand out from the rest. "Intro to Recycled Cinema" sees the group trying to cobble together a truly terrible sci-fi film with sets made from found materials around Greendale. The stupidity of their movie, and then filming of it, is amazing. "Grifting 101" finds the students (and teachers) battling against a new professor teaching a class on grifting (which, in the logic of Greendale Community College, is, of course, a grift). And then the final episode of the season (and series, at this point), "Emotional Consequences of Broadcast Television", manages to explore the idea of how the show could continue when all the cast members leave, a poignant idea considering the fact that the cast was constantly churning at this point.

Along with the show having an issue coming up with ideas, though, it also lacked humor. Sure, there were laugh out loud moments but the comedy of the show, overall, was lacking. I have to again point out the fact that the loss of Donald Glover from the cast really hobbled everything the show could do. Community mined a lot of humor out of cutting to Troy for a reaction shot, making so many of the episodes work via his character. Without him, Season 5 had to put other characters in for the reaction shots (like Annie, and Hickey), but even these were lacking by Season 6. What jokes they did have weren't as laugh-out-loud funny, and they certainly didn't come as quickly or as well. The show lacked its trademark funny, especially to the level it used to manage, making this season feel much more like a whimper than previous seasons (other than the fourth). 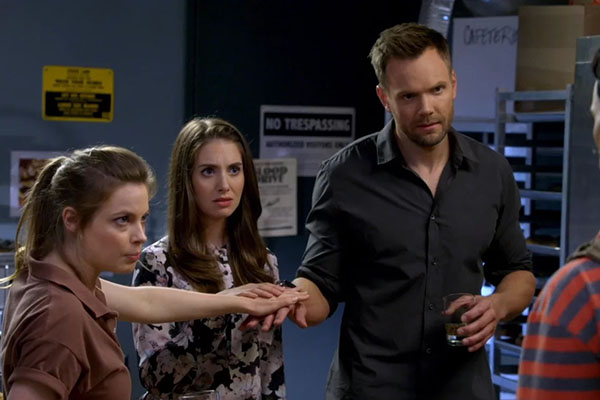 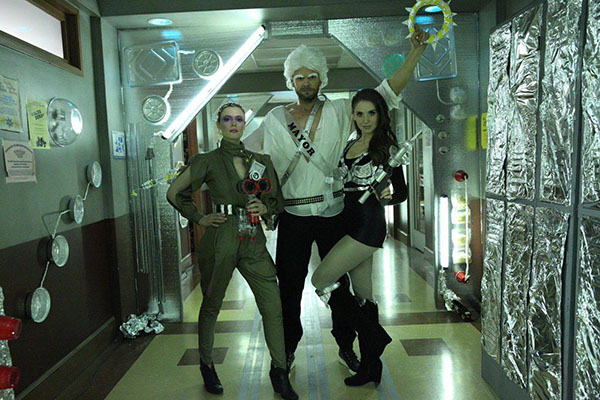 I don't want to make it sound like I hated the sixth season of the show -- it's still Community and, at times, still showed the spark of the show at its best. But those moments were fewer and fewer and the show took more and more time to build its concepts and find the humor it used to mine so easily. Certainly if the show had been renewed by Yahoo Screens for a second streaming season (instead of killing Yahoo Screens so hard it no longer exists) the show very well might have died a gasping creature that no one cared about anymore. Sure, it could have found the funny again, but as shows go on feats like that becomes harder and harder to pull off.

Perhaps, then, it was a good thing that the show ended when it did. I love Community and the thought of it ending originally made me sad. But going back and re-watching the whole run I do see the flaws of the later seasons. I enjoyed the show, but I have to admit that it really did peak with Season 2. Thinking now about what the show would have been like if it had continued on for another season (or two, or three) makes me even sadder, honestly. Time off was what was needed, as the recent "live episode" they did proved, so perhaps its cancellation was the best thing that happened for the show. If it gets some kind of revival (which apparently it in the cards even now) the time off likely will allow everyone to find their creative juices again and come back fresh and ready to make Community the show it should be.

This episode focuses on two plot lines. In the A-plot, the Dead is invited to join the Community College School Board (which is apparently a thing), but the rest of the board wants him so he can be their "token gay". The Dean, though, is more than just gay, or poly, or pan, or whatever, so he feels like he's closeting himself by coming out as "gay". I dunno what the show was going for with this episode but somehow they managed to make an episode about coming out feel even more homophobic. The Dean and his sexuality have always been a joke on the show, but not always a good joke, especially when they make the character predatory (a trope about gay men that really needs to go away at this point). Making his sexuality even weirder doesn't make the character any better, it just makes the show feel even more out of touch with the LGBTQ+ community.

Meanwhile, in the B-plot, Annie and Chang get cast in a community theater production of The Karate Kid, and this plot line is beyond unfunny. All the "humor" comes from the director yelling at Chang the whole time, being excessively cruel and mean spirited. Its uncomfortable, and not in a funny way at all, and by the end of it you just want the whole plot line to end. 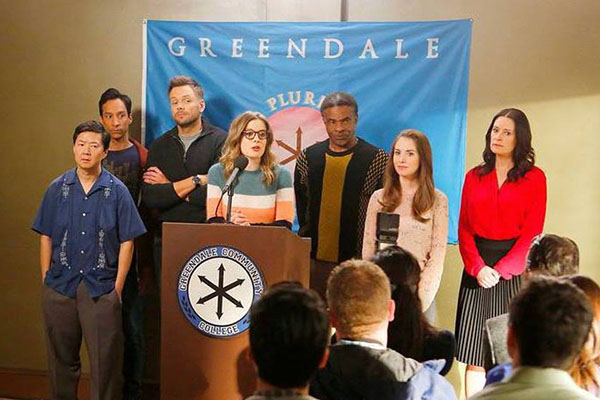 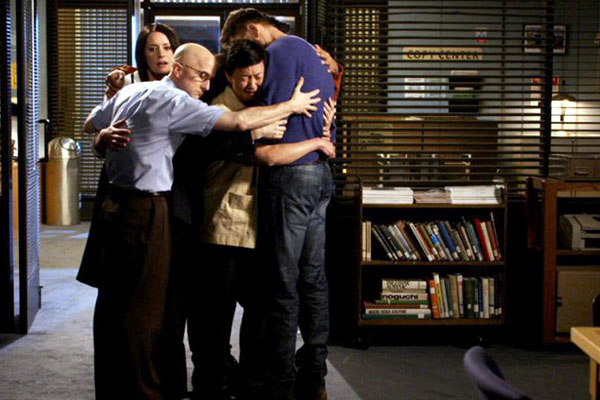 Nothing about this episode works, making it the lowest of low points for the season (and that's including the incest episode, "Wedding Videography").

Chang, for whatever reason, becomes a famous spokesperson -- the "Haaaaaaam GURL!" guy -- and, to make money off of his fame, the rest of the school decide to film a shitty, low-budget sci-fi film that repurposes two minutes of footage Abed had of change from a movie that never got made. The movie is shit, the whole production is shit, and everything about it is a total farce.

I really do enjoy this episode. The get so much of the content of this episode right, from the pitiful production values to the awful, improvised dialogue, and it's so much fun to watch this train wreck happen. I have to admit, if the whole movie had actually been made, I would have watched it. This film is garbage and I'd watch it more than once to really savor it. Nicely done.