Getting the House Back in Order

When last we checked in with Community, the show had been going through changes. Due to behind the scenes issues, NBC stepped in before the start of production on Season 4, creative force Dan Harmon had been replaced by two dudes no one cared about, and while the show itself tried to continue plugging along, something was very much missing. It still looked the same, sometimes even sounded the same, but the very soul of the show was missing. It was, in a way, Community without Community. 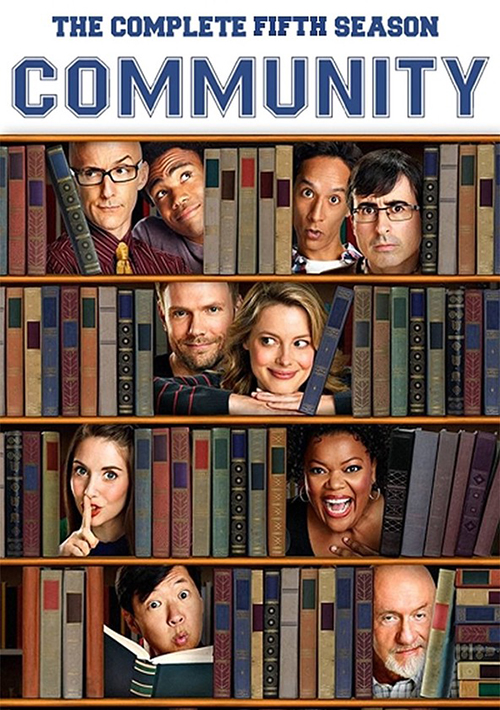 Realizing the big mistaken they had made, the studio swung back around and hired Dan Harmon onto the show once more, once again giving him free rein to tell the stories he wanted to tell. The big change for the new season, aside from finding its creative voice, was the firing of Chevy Chase, himself a disruptive force behind the scenes who had caused problem with other stars as well as with Harmon (although, in fairness, the actor didn't view it that way and felt he had been railroaded).

And further change were going to occur. Chase's old man Pierce was replaced by another "angry old man", Jonathan Banks's Prof. Buzz Hickey, a grumpy criminology teacher who also, privately, draw cartoons about a grumpy duck. Then, mid-way into the season, Donald Glover's Troy left the show, written off on a voyage of self-discovery as he sailed around the world to earn his inheritance from the now-dead Pierce. The fabric of the show was changing and while it was great to have the creative voice of the show back, it was hard to argue that things really had gone back to normal.

The show did try, mind you. After the previous season had seen Jeff graduate a semester early and leave the central location of Greendale Community College, Harmon quickly found a way to get the study group back together and once again stuck at Greendale. Jeff's law firm, which he was one-manning out of a mall store, went belly up and, out of desperation, he takes a job teaching law at his alma mater. Meanwhile the rest of the group -- Annie, Britta, Troy, Abed, and Shirley -- are all displeased with the direction their lives have taken since graduating months earlier. Realizing they all settled for careers they weren't enjoying, they collectively decide to go back to school to get the training they need for jobs they really want.

Greendale, of course, is a hole, a trash-heap school that no one should want to go to. The group knows this so, after some cajoling, he enlists the group to act as the "Save Greendale Committee", a group of teachers (Jeff and Hickey) and students (the rest of the old study group) that will work to make school improvements and generally get Greendale pointed in the right direction once again. The only problem is if Greendale ends up not being a hole it might end up being valuable, and then forces outside the study group/committee could end up wanting to take over Greendale for their own devices. 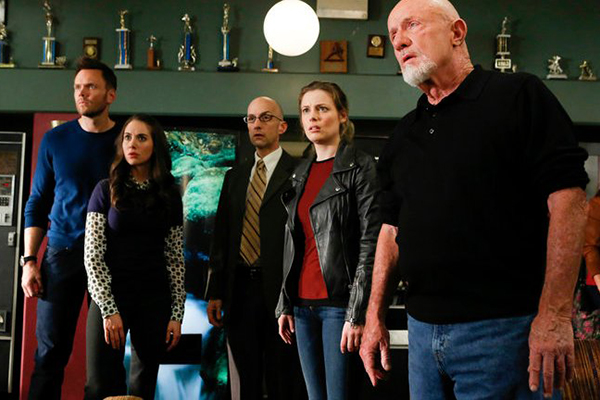 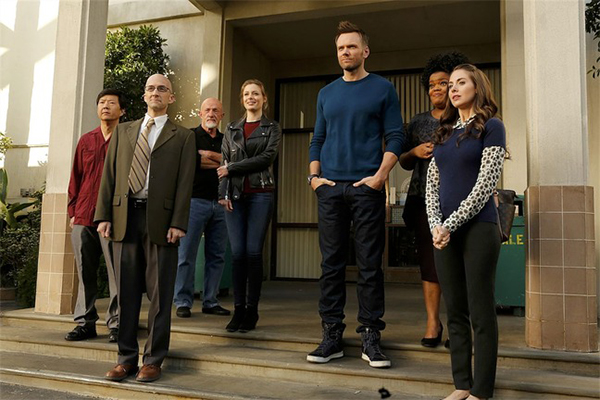 For much of the fifth season it does feel like Community had its soul back. The humor was there, as were the silly situations, the heart, and the parody. Everything people said they loved about the show was back without it feeling forced or awkward. Fourth season illustrated how delicate that balance could be, that in the wrong hands the show could feel like it was trying too hard, but with Harmon back the show had it stride back and could do strange concept episodes -- the post-apocalyptic game of "the floor is lava" in "Geothermal Escapism", the Zardoz parody of "App Development and Condiments", the literal G.I. Joe cartoon action of "G.I. Jeff" -- while still finding the heart needed to tell those stories in a compelling manner.

The new addition to the cast, Buzz Hickey, also added some much-needed juice to the show. His acerbic old man gave the show a different energy and a new set of stories to draw from. Frankly, the show really didn't know what to do with Chase's Pierce Hawthorn by the end, giving the actor less and less to do while leaving him with little more the racist rumbling and old-man confusion in the scenes he provided. There weren't any big character arcs for him, but Hickey got to explore his cartooning, his passion (or lack thereof) for teaching), and his screwed up family dynamics at home. Replacing Chase with Banks helped the show find new directions to explore. The only sad thing was that Banks would leave after this season so the show would be forced to retool again after this.

The biggest gut punch, though, was the loss of Glover's Troy Barnes. Originally written as just a dumb jock early on, the actor had real chemistry with Danny Pudi's Abed Nadir, and over the course of four and a half season their characters, Troy and Abed, had all kinds of antics, becoming very much the heart of the show. Going back and watching all of these episodes over the last few months, it's amazing how much the show used Glover's Troy, not just by pairing him with Pudi's Abed to explore all kinds of interesting stories about friendship. Even in small ways, Glover added to the episodes, always there for a solid reaction shot or a hilarious cut-away line reading. Once Glover left, there was a very big comedic hole in the show and while it remained funny, it didn't feel as funny. Something was missing, that key component that kept the show lively and hilarious.

But, again, the show tried. It would bounce characters, old and new, off of each other in different ways. John Oliver's Professor Ian Duncan was brought back and given seven episodes to play along with the rest of the cast and add his own dry, British wit to the fun (but, as with Banks, Oliver would leave after this show, never to return). We also had a huge cast of guest stars brought in for episodes -- Steve Agee, David Cross, Walton Goggins, Kumail Nanjiani, B.J. Novak, Robert Patrick, Questlove -- but they couldn't fill the void left in the show. Something as definitely missing even if the show acted and sounded much more like it should. 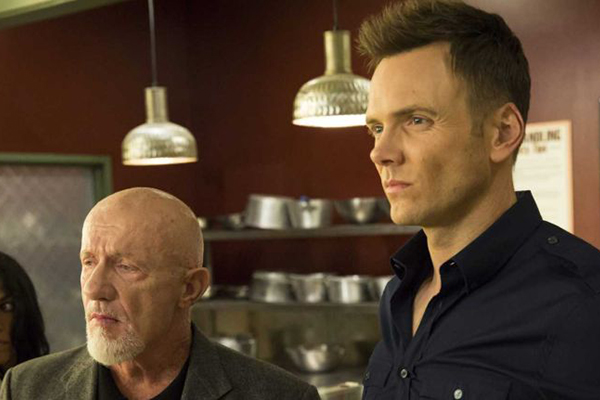 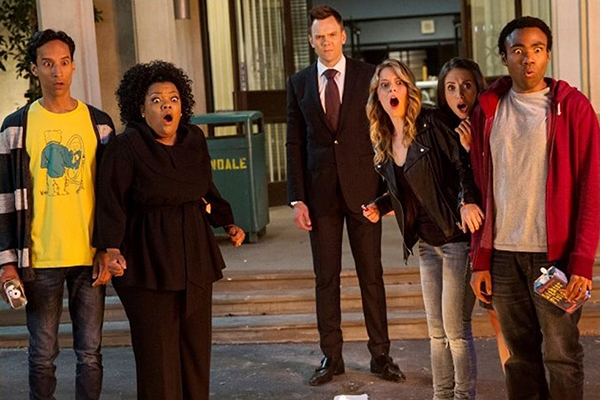 In the end fans of the show just had to face the fact that the show wasn't the same anymore. Due to NBC's own meddling, and then upheaval of casting, the face of Community was constantly changing. No matter how much everyone wanted to get things back on the track, the show was more about its change than about staying the same. People came, people went, characters grew up and moved on, and nothing could stay the same. Season four had marked the beginning of the end and no matter what Harmon and his crew tried to do with fifth season there was no ignoring the sense of the inevitable. This wasn't the Community we all remembered. It wasn't as good as it once had been, no matter how much it tried. It might have been better than season four, sure, but in comparison to the heights of season two and the steady storytelling of season three, this was a show slowly sliding past its prime.

It's hard to say any of the episodes of this season were bad, especially not in comparison to the wretched tales told in season four, but there were less impressive episodes in the bunch. "Advanced Advanced Dungeons & Dragons" is the worst for me because it's the one episode that actually feels like it's trying to hard. It's like the crew said, "hey, everyone liked that D&D episode we did, right? Let's do that again!"

The fun of the original episode, "Advanced Dungeons & Dragons", was in the one-off style of its story-telling, the fun it had in reinventing the way Community told a tale and used that to tell a story of heart and soul. Plus, it perfectly illustrated the actual table-top experience but leaving the real "special effects" in the minds of the viewers. "AAD&D" lacks much of that depth, telling a less funny, less heart-warming story with the same trappings of the previous episode. It doesn't really give us anything new or different from the previous tale, just goes through the motions once again. 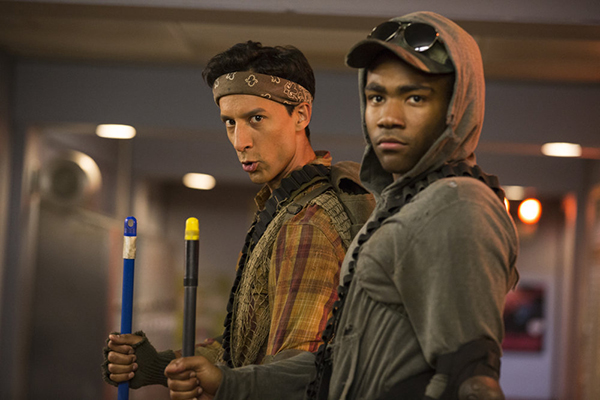 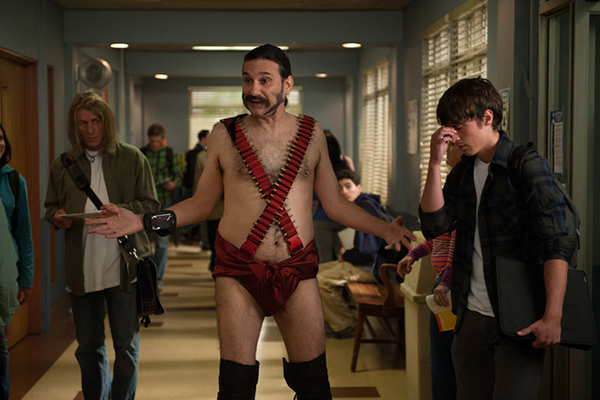 It's a fine enough episode but as a sequel to one of the highs of the second season, this fifth season affair falls very, very flat.

Although I really wanted to talk about "App Development and Condiments" -- seriously, what other show would do a parody of the little-loved Sean Connery post-apocalyptic sci-fi yarn Zardoz? -- I had to give the edge to "Geothermal Escapism". This episode follows in the line of the great paintball episodes of past seasons -- "Modern Warfare" from season one, "A Fistful of Paintballs" and "For a Few Paintballs More" from the second season -- swapping in "the floor is lava" for paintball. This allows the school to once again explore the madness of the students and lets the show indulge in its quest for parody.

But what really brings the episode home is the heart. Not only is this a fun parody episode but it also marks the last episode from Troy Barnes as the character is written off the show in a sweet, fitting episode all about Troy and Abed. Abed struggles to let Tory leave since the two are the best of friends, so he devises a game they can play forever without anyone ever having to win. Troy, meanwhile, has to realize why he's leave, what it truly means, and just how much he will miss everyone else. It's sweet, moving, a little heart-breaking, and all around the best of what Community could do.