No Caring, No Sharing

It's an interesting thought experiment to try and come up with the idea for a TV show you could launch today. As many commentators have noted over the last few years, we live in an era of "Peak TV" -- there are so many viewing options, channels and streaming services, with all of them cranking out a ton of new, scripted content, that it can be difficult to keep up with everything. I watch a lot of stuff for this site and I have to make conscious decisions about what's worth my time and what I have to ditch because I just can't get around to it and keep up with my regular schedule. Imagine trying to launch a TV show against that, with everyone constantly busy, having at on of content to watch, plus the Internet and video games as well. Peak content is a real thing so getting a new show out there, with eyeballs on it, must be extremely difficult. 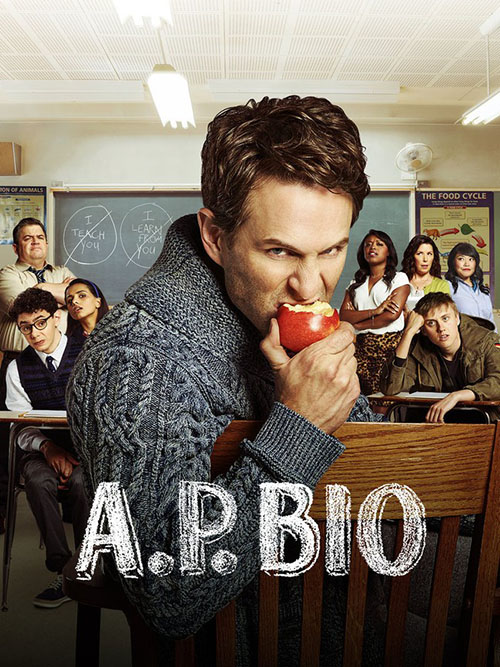 It's a fact facing most TV networks at this point. Although there are still a few bona fides hits -- Big Bang Theory was still reaping in 18 Mil viewers in its last season (before finally ending), and for a while there both The Walking Dead and Game of Thrones were pulling in double-digit millions of eyes -- most shows get the kinds of ratings now that, ten years ago, would have gotten them canceled in a week. At this point it seems like whether a show is successful or not depends as much on the social media response and fan outpouring of support as it does the ratings since, honestly, ratings don't mean that much anymore. Who cares about the viewers that show up for the show immediately when there's DVRs, Hulu, and NetflixOriginally started as a disc-by-mail service, Netflix has grown to be one of the largest media companies in the world (and one of the most valued internet companies as well). With a constant slate of new internet streaming-based programming that updates all the time, Netflix has redefined what it means to watch TV and films (as well as how to do it). viewers as well. A show might not do that well in its time slot but then kill it in streaming viewers, making more from licensing than it does from ads.

Into this landscape of modern TV a show has to do something special to stand out. There are already plenty of lame, run-of-the-mill family sitcoms out there (see: Kevin Can Wait and Last Man Standing, two shows I personally will never watch), so most other sitcoms have to go a different direction. Into this landscape entered AP Bio, a show that seemed like equal parts Community and It's Always Sunny in Philadelphia. Set in a high school, the show featured blackly-dark humor and a real mean streak, casting it as a kind of counter-argument for all the other sitcoms out there. Of course, while there's value in programming against type, sometimes a show can go too far, alienating viewers with it's (hilarious, delightfully) nasty sense of humor, and that's the fate that befell AP Bio, sadly.

Set in Toledo, OH, AP Bio follows Jack Griffin (Glenn Howerton), a failed Harvard professor and published philosophy author, as he heads back home to live in his dead mother's house after getting fired from the illustrious institution. Over the course of two seasons (which, I think, are all set during the same school year in the world of the show), Jack does everything he can to get out of Toledo, get his job back, get his next book published, and get revenge on everyone who (he thinks) screwed him over in the past. Outwardly he teaches AP Bio to a bunch of nerdy, brainy kids, but from the outset he arranges it so that he teaches them nothing, they learn nothing, and as long as no one says anything, everyone will get an A. And then the student start helping him with his schemes, he grows to appreciate a number of the kids under his care, and while he never outright grows or cares or shares, he does at least have their back.

The biggest strength of AP Bio is also its greatest weakness: Jack. The teacher is, basically, a nasty little man-child. While he can take care of himself, he's so stuck in his own bullshit that he's barely able to see the world outside his own ego. He's mean and nasty and probably the single worst person to ever hire to teach a class (which is probably part of the reason Harvard was happy to be rid of him). But that's also why the show works: so much of the humor is derived for Jack's nasty personality, his biting comments, his shitty treatment of the world around him. You hate him but you also appreciate his nasty world-view since it makes the show laugh-out-loud funny. 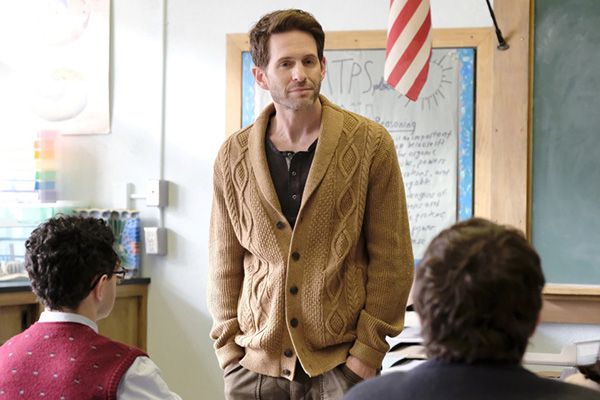 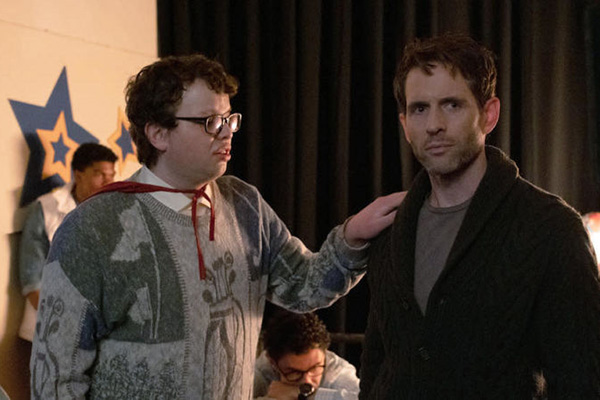 Assisting Jack, and making the show better by their very presence, are his students. Although not all of them are standouts, a few of the teens steal the scenes they're in, really elevating the material. Allisyn Ashley Arm is probably the single funniest person on the show, giving her all as the dry and sarcastic Heather. Heather is the first student to really bond with Jack and she become his right-hand woman, helpi9ng him with his plans and really elevating the material. Heather is the MVP and the show knew this, giving her more and more to do as the series went on. Along with Heather there was also Sari Arambulo as Grace, a student who is probably the darkest, nasty character on the show. Written s a full-tilt sociopath, the true levels of her darkness only became apparent as the show went on. The surprise when she'd say something awful, do something horrendous, really made her scenes connect. She's awful and hilarious.

That said, not all the students in the class were nearly as great. Although Marcus Kasperak (Nicke Peine) and Sarika Sakar (Aparna Brielle) are prominently featured in the various episodes, the show rarely knew what to do with them. Both students were written as wet blankets, more than likely intended as forces that could balance Jack, but Jacks character has no balance, no remorse. In a show focused on the teacher and his willing accomplices, a couple of boring tag-alongs, no matter how well they were played, just weren't going to bring the necessary humor and magic to the show.

Meanwhile, outside the classroom the show faltered further. Although I like Patton Oswalt, his character, Principal Durbin, was just a sad-sack without a lot of humor to him. He was still more interesting than the trio of female teachers on the show, though -- Stef Duncan (Lyric Lewis), Mary Wagner (Mary Sohn), and Michelle Jones (Jean Villepique). These three rarely added anything to the show and their storylines were, more often than not, filler than never really went anywhere. The show could have been better if it just focused on the classroom itself and rarely, if ever, ventured out into the wider school.

The thing is that the schemes, and how they would always fail, was part of what worked for the show. Jack had to be kept with his face in the mud, a sad-sack stuck in Toledo, because if he ever won (without at least first growing), then the show would be saying, "you can be awful and still get ahead." While that might be true in the real world, that's not a great through-line for a show. Jack had to fail, and then try again, and then fail again, and the show needed to stay focused on that. As long as he was failing, the show had energy and never needed to go outside the bounds of the classroom. 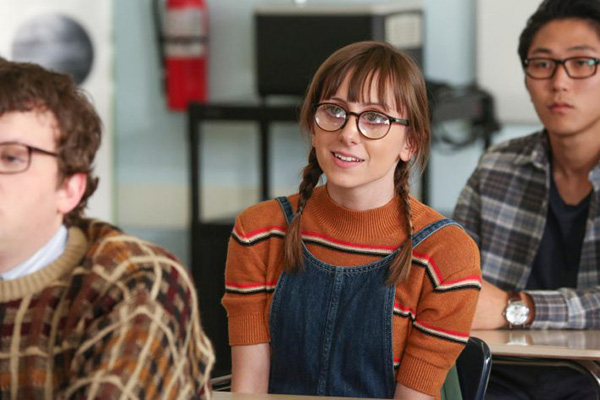 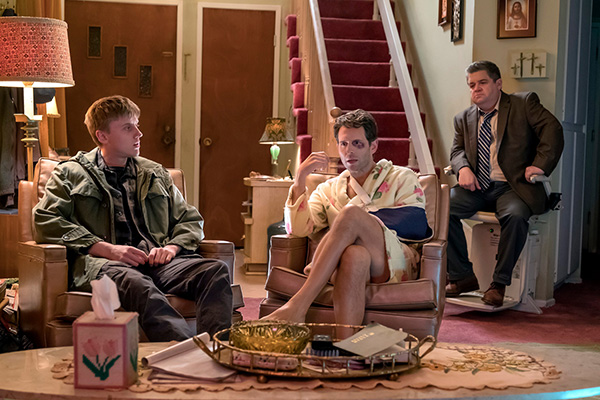 I'm not surprised that the show was canceled; as much as I liked it I have to admit that AP Bio was uneven. There were great, laugh-out-loud parts of the show, but there were also clunky sections that didn't really work that well. And, really, if the nasty, dark humor didn't interest you there really wasn't anything that the show could offer you otherwise. This was a show for a very select audience, and even they had to have patience sometimes to really enjoy it. I'm sad the show is gone but, at the same time, I can't really argue with the decision. it did what it had to and left before any caring or sharing ever happened, which seems perfectly fitting.

Editor's Note: After posting this review, it was announced that AP Bio would be resurrected, granting the show a third season. That's the good news. That bad news is that it's going over to the new NBC Universal streaming service that a lot of us probably aren't going to pay attention to (this is the first things that service has announced that I'm at all interested in). While it's great to see the show get a new lease on life, I'm stuck hoping it comes out eventually on home video since I'm never going to bother with NBC Universal.