Troy and Abed in the Morning

It feels like easy pickings at this point to come along as do a review of Community. The show, which ran for five seasons on NBC and then a single season on the short-lived streaming service Yahoo Screens (which the show is credited with killing in the process), was a critical darling. While it didn't garner huge ratings at the time, the show developed a solid, cult following that lives on now, even four years after the show left the air. There's still talk about the series getting a film, of the cast reuniting for one last hurrah, and that's all because of how great this show is. Any review of this series could easily say, "just go watch the damn thing and enjoy" and it would be good enough. 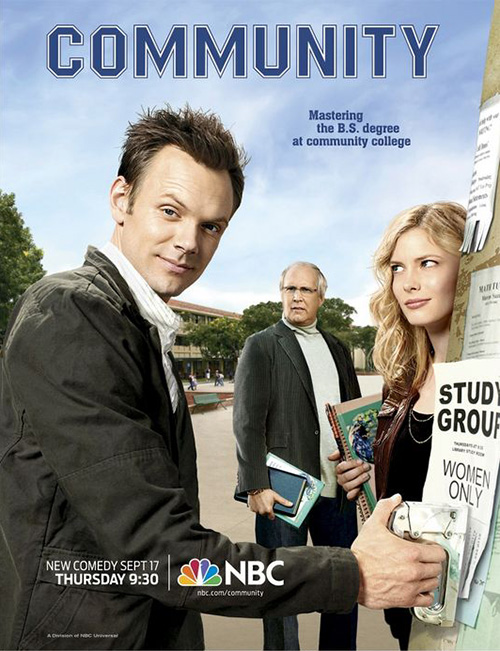 Of course, I'm much too verbose for that, so let's really get into detail about why this show is so beloved. But to do that we first have to get past the first season which, in and of itself is a great show but, in comparison to much of what would come afterwards, feels like a very different beast altogether. When we talked about Daria I discussed the fact that the cartoon had a voice that it controlled from the start and while it evolved and deepened its characters, it never went to the well of gimmicks or running gags. Community takes an opposite approach -- it's a show that revels in self-referencing, in building humor out of how meta it is, commenting on itself, and pop culture in the process. I don't think one way of building a show over a few seasons is better than the other, just that it's an interesting contrast in approaches.

It also means that Community had to take time to build to its particular style of humor, which may have thrown some people off. The show we all know and love now -- the one that would commit entire episodes to elaborate movie pastiche -- is very far removed from how the show began in its pilot episode. As depicted at the start, the show was about cool guy (and one-time will-be-again lawyer) Jeff Winger (Joel McHale) and his pursuit of the hot blond girl in his Spanish class, Britta Perry (Gillian Jacobs). To prove how good of a guy he is, how not shallow and awful he is at his core (which he totally is, mind you), he creates a Spanish study group for just him and her (so it's not a date). And then she invites a bunch of their classmates to it, creating a rich and detailed cast of character to hang out with.

Among that cast we have Abed Nadir (Danny Pudi), lover of film; Shirley Bennett (Yvette Nicole Brown), single mother of two; Annie Edison (Alison Brie), type-A over-achiever who flamed out in high school; Troy Barnes (Donald Glover) ex-football player after he lost his scholarship; and Pierce Hawthorne (Chevy Chase) a crude, old, rich man and perpetual community college student. The interactions between these characters, and many of the side characters around them -- the perpetually awkward Dean Pelton (Jim Rash), angry Spanish teacher Senior Chang (Ken Jeong), and philosophy teacher Ian Duncan (John Oliver) -- created a mix of wry jokes and odd situations that drove a particularly great opening season. Sure there were a few less than stellar episodes, but on the whole the season really clicked very quickly, finding a natural groove among the characters as it slowly, and steadily, upped the absurdity of the whole series.

This show is very absurdist at times, making it closer in tone to some British shows. I liken it to Faulty Towers or The I.T. Crowd, shows that can have very grounded character and yet also can get very silly and strange, making a turn into parody on a dime. And it works, the fact that you have very natural, normal characters who can then get sucked into a dancing interlude, such as in "Interpretive Dance", or a cop-show parody, like with "The Science of Illusion", allowed the show to constantly reinvent itself and find new, strange things for the characters to do. 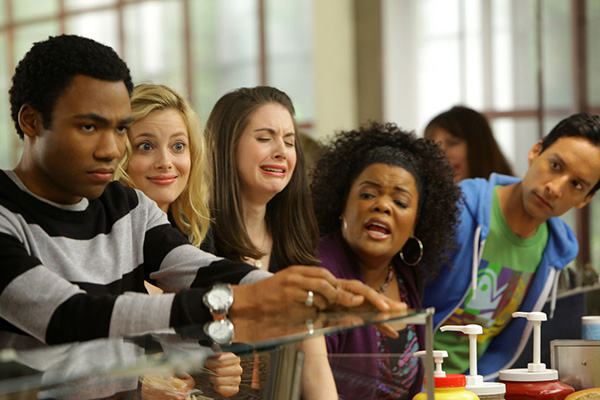 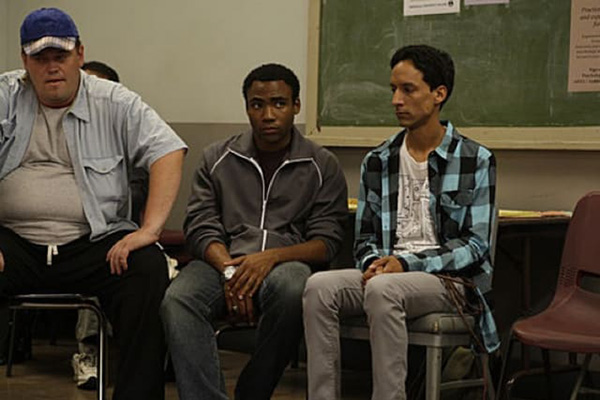 But then the series is able to get away with this because from the very start it never treats its central location, Greendale Community College, as a real place. From the very beginning the show makes jokes at the school's expense, pointing out how it isn't a real college, that everyone that goes there tries to get away from it, and how the place is basically a toilet. Honestly, the locations depicted in the show make the college look pretty nice, all things considered, but that's all part of the joke. No matter how nice the school may be, no one that goes there (or teaches there, or works there) takes the place too seriously. People show up, classes happen, but it's everything in and around the actual "schooling" that really matters, and that's where the fun (and absurdity) can begin.

And that leads us to the biggest parody episode of the first season, the one that really showed just how far the series could push its formula: "Modern Warfare". In this episode the school has a big end-of-the-year bash with a game of Paintball Assassin. This very quickly degenerates into all out war as people form alliances, students are picked off left and right, and the entire place descends into chaos. This was the biggest parody episode to date, following on the cop pastiche of "The Science of Illusion" and the mob-land parody of "Contemporary American Poultry" (both of which are on my list for best episodes of the season), and it really committed to the whole bit. In blends in elements of Vietnam war movies, along with a healthy dose of Die Hard to create a whole new version of the show if only for a single day. And then the next day of class arrives, the mops come out, and everyone moves on.

It's those moments that really stick out in the series and would set the tone for the series moving forward. These kinds of parody and pastiche episodes would become the norm over time as the producers find all kinds of new, strange ideas to graft onto the show over its course. And yet it's the first season that, while the least meta, also has the purest form of the show's original concept baked in. This is a show about failed students trying for a second chance at a crappy community college and while all kinds of weird things happen around them, I appreciate that this early season still kept the focus on the school and students within. Parody is great, and I love the places the series would go to after this season, but I found myself really getting interested in the smaller moments of each character's lives. This season had that focus and it really made for a rich, detailed experience.

And, really, it's when you look at the season as a whole that you see the trend towards pastiche kick in as the show moves towards the absurd more and more. "Physical Education" is a absurd take on pool shark scenarios, "Beginner Pottery" layers in the necessary Ghost jokes (with a side plot in the parking lot parodying naval movies), and then these are quickly followed by cops, gangsters, and "Modern Warfare". After that, the last two episodes of the season are actually pretty sedate without nearly as much meta-parody layered in (which might be part of the reason why I always forget the last two episodes exist, thinking the season ends at "Modern Warfare"). After the highs of those parody episodes, the show illustrated for itself that it really couldn't turn back. 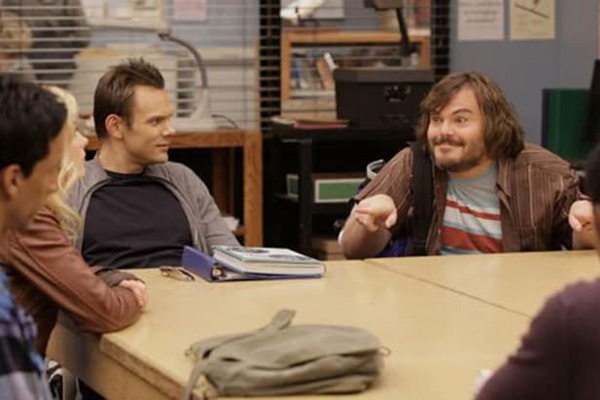 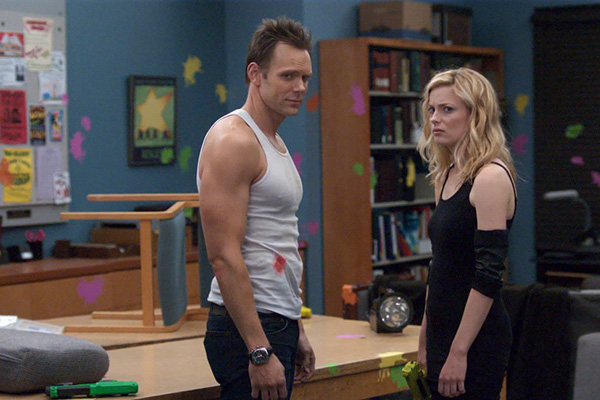 As we move forward we'll look at how the show evolved and changed to suit the whims of the production staff. But, in the back of my mind, I'm going to be comparing the latter seasons to this first to see how far away from the original concept the show really got and if, in the long run, it really did lose the core of what it was. It remained a great show up to the end, but I am curious to see just how it evolved and maybe if it lost its way in the process. It'll be interesting to find out.

This episode marked the return of the show after it's mid-season winter break, and it's a really dire affair. It's one of the few episodes I would mark as truly terrible, and it's all because of Jack Black. This show doesn't go in much for stunt casting, usually keeping quest roles to B- or C-list character actors. For whatever reason, though, Jack Black was brought in to play Buddy, an obnoxious guy who tries to force himself into the Spanish study group. He's just a collection of awful moments and obnoxious catch-phrases, essentially the complete opposite of everyone else on the show. I get that was probably the point of his character, to put himself in contrast to everyone else and find the humor in the situation. Sadly, there was no humor to be had. The second Buddy leaves the show, never to return, you breathe a sigh of relief.

Also, there's a side plot about Jeff becoming the lead editor of the school newspaper, which gives him a plush office. Don't expect to see this again as this whole storyline is dropped the second this episode is over and the school newspaper is never mentioned again. This is a total waste of setup and, coupled with buddy, a total waste of an episode.

Standing in stark contrast to "Investigative Journalism" is this episode which commits so thoroughly to its bit and never once becomes obnoxious. What I love most about this episode is how quickly it turns on a dime, going from a normal day of school to instant and utter chaos. Everyone is running and screaming, alliances are made, and the entire school is turned into a wasteland. It's amazing. There's a reason why this episode is held up as one of the greats of the entire run (and would get revisited, in various ways) throughout the series.