Of Air Conditioning and Alternate Dimensions

By now we all know that Community, despite appearing like a show about a dinky community college, is actually a show about being meta. It's a show that comments on the idea of shows about schools, it comments on pop culture, and, really, it comments on the very idea of commenting in general. It's job isn't so much to present anything resembling reality so much as the comment on the reality people thought the show was presenting. It can, at times, be just a little tiring. 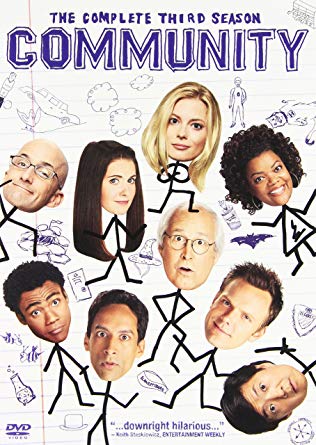 I don't really mean that to sound negative, not truly, but at the same time the whole concept of Community does wear a tad thin in the third season. Second season is great, a well executed season of the show that manages to push itself in every direction and find new ways to comment on the pop culture landscape of the time. It's not without its flaws -- I know I found flaws in the season going back and watching it again -- but I felt that over all it was strong. The hope was that the third season could help the show grow further, find new ways to expand the humor and push its concept to new heights. Instead, third season just kind of meanders and does more of the same.

This is where we have to really think about what we want out of Community. Is it just a show that occasionally parodies otheer shows and is allowed to make weird, meta-humor jokes? Because if that's all you want out of the show, this season lands. A couple of episodes in the set are there simply to parody other concepts, like "Regional Holiday Music" taking on Glee or "Foosball and Nocturnal Vigilantism" revisiting Abed pretending to be BatmanOne of the longest running, consistently in-print superheroes ever (matched only by Superman and Wonder Woman), Batman has been a force in entertainment for nearly as long as there's been an entertainment industry. It only makes sense, then that he is also the most regularly adapted, and consistently successful, superhero to grace the Silver Screen.. These episodes aren't without their jokes and amusing riffs -- Annie gets great mileage out of a sexy song that goes way too far in "Holiday Music", and there's a great anime sequence in "Foosball" -- but at the same time its hard to say that either of these episodes really push their concepts far enough.

It's a problem that infests much of this season. Three major throughlines emeerge this season, none of which really feel like they get enough development to carry the season. The first strand happens in the third episode of the season, a standout episode (that was nominated for both Emmy and Hugo awards) that sees a housewarming party for Abed and Troy split into seven different alternate realities. One of these realitiees, what Abed calls the "Darkest Reality" becomes a running bit as Evil Abed from that reality crops up, time and again, in later episodes. Whether Evil Abeed really exists, or is just in Abed mind, is an idea that is raised but not explored in a satisfying manner. Plus, the show appears to settle on the idea that Abed is crazy and needs therapy, something that previous seasons (and an episode this season) had conclusively dismissed, leaving this whole story muddled.

While this is going on, two other threads emerged as well. On one side is Dean Pelton and his struggles to keep the school going under dire budget cuts. It's seems that the school's AC Repair Annex is actually the source of 80% of the school's budget and, during a spat between the two sides of the schoo,, the annex withdraws their funding. This leads the Dean to fire much of the auxiliary staff that keeps the school running, and then prompt him to hire Chang (the crazy ex-Spanish teacher) to be the new head of security at the school. Chang then goes right off the deep end, hires a fake dean to replace the real one, and then starts ruling the school like a crazed dictator. 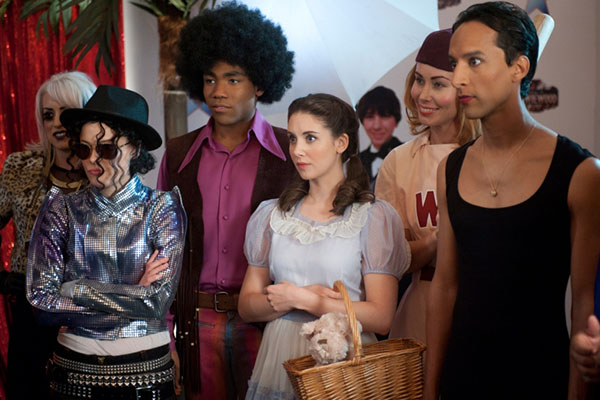 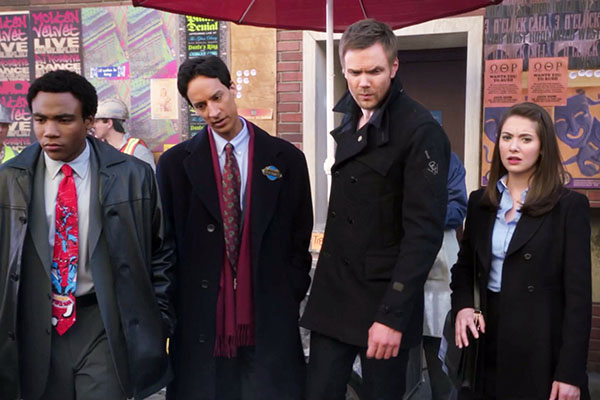 Meanwhile, Troy gets sucked into his own AC Repair Annex storyline. Tory, as established in first season, is a natural at repairing plumbing, AC units, and other mechanisms. The Vice Dean of the AC Replair Annex (John Goodman) wants Troy for the AC program and, over the course of the season, tries to find ways to tempt Troy into joining. Troy's story here comes to a head around the time that Chang truly goes off the deep end, and the two halves end up revolving around each other, with one leading to the resolution of the other before, then, finding is own climax as well.

I'm all for serialized storytelling. Each portion of these stories -- Evil Abed and the Evil Timeline, Dean v Chang, and Troy v the AC Repair Annex -- have good beats in them that could lead to character growth (for everyone except Chang who, so far, still hasn't gotten any kind of character redemption after being character assassinated in second season). What these stories all lack, though, is humor. Troy getting sucked in the AC school is an amusing idea but the jokes just aren't there, and then same goes for Evil Abed, and for Chang being crazy. Chang especially just isn't funny because it's a shtick we've already seen for the two seasons before this. It's nothing new for the character and that alone ruins any humor that could have been devised from the situation.

That's not to say that third season is a waste, just that the grand ambitions of the season aren't as good as the individual episodes, especially those that really get going. Along with "Remedial Choas Theory", we also have "Documentary Filmmaking: Redux" which sees Abed documenting the Dean's efforts to record a new commercial for the college, "Pillows and Blankets" in which we revisit the concept of blanket forts (from second season) set against a backdrop of a Civil War-style documentary, and "Nocturnal Lupine Urology" which does a spot on parody of Law and Order. These episodes all bring solid humor and great jokees while also highlighting how strange Greendale Community College really is.

And yet it's telling that two of the best episodes of the season, "Doumentary Filmmaking: Redux" and "Pillows and Blankets" essentially revisit bits that worked really well in second season, and, in addition, both are basically documentary episodes. THe other real stand out is a parody of a long-running successful show, and much of the humor of that episode is in how much it apes the source material -- it does it well, yes, but does that really make it original? 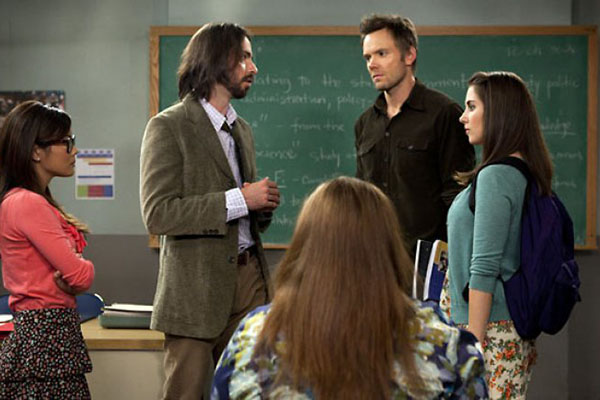 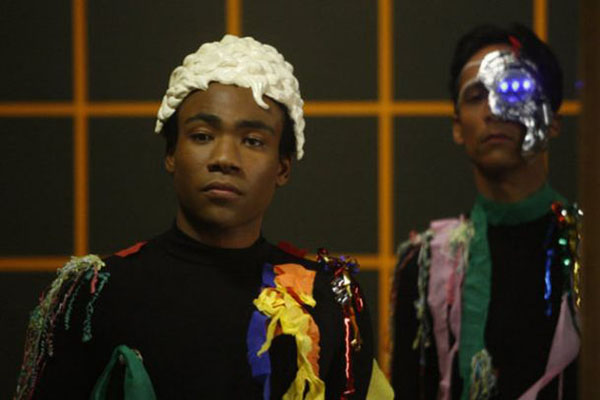 Going back and watching third season I was struck by how much it felt like this season was trapped in a rut. Yes, the series is stiill funny. Yes, the cast of characters are still great, and it's always enjoyable spending time with them. Even the worst episodes are stiil enjoyable enough in themselves (except for "Advanced Gay" which we'll discuss in a bit). But on the whole this season is just lacking something special. It had all the elements at play and it seems like the producers really had grand ambitions for the season but, for whatever reason, it never really gets there.

Still, considering how bad the show could get in fourth season, when creative head Dan Harmon was removed from the show and the series was given over to David Guarascio and Moses Port ("famous" for short-lived, awful projects like Aliens in America, Imaginary Mary, and the filed U.S. adaptation of The IT Crowd). Things are going to get bad before they get better...

Ugh, the early part of this season was dire. While we did get "Remedial Chaos Theory" as the third episode, it was preceeded by "Geography of Global Conflict" (a dud episode with Annie taking on her own evil "clone"), and then followed by "Horror Fiction in Seven Spooky Stages" (a weak scary story anthology that goes nowhere) and then "Advanced Gay" which is just... ugh. It's a Pierce-centric episode, because of course it is, and it does little to reform the character or make him more than a font of racist and homophobic jokes. In the episode Pierece learns that his company's wet wipes, Hawthorne Wipes, are a favorite of the gay community (presumably for sexual reasons). Pierce wants to double-down on this and create a campaign directly for the gay community (which is as bad as it sounds), until his father steps in and squashes the whole thing. This then leads to a confrontation, and then Pierce's father dying, and... well, no humor at all in the episode.

One of the big issues I had with second season were the constant gay jokes that filtered out of Pierce's mouth. While, on the whole, he wasn't as bad this season (and, in fact, this season took steps to make him a much more enjoyable character), this episode works hard to undo all of that. It's one long, awful parade of gay stereotypeps at the start, and then the racist father steps in and drains all the humor out of the room. Next time I watch through the season I'm skipping this episode.

Seriously, this is easily the best episode of the season largely because it remains self-contained from all the weird storylines that were building around it. In the episode the study group's sweet potato, which they've been growing in their Biology 101 class as a group project, is smasheed over night. Their teacher elects to give them a C since he can't judge how the veggie would have really grown otherwise, but the group decides to find out who killed their project and get their A. This leads to a spot on Law and Order parody -- complete with redone opening credits -- with Troy and Abed take the cop side of the case while Jeff and Annie take the courtroom storyline.

What works so well in this episode is how much the show commits to the bit. We of course get the setting title cards (with "bom bom" sound effect), but all the charcaters dive into their roles as well. Tory and Abed, of course, are used to dressing up so seeing them play hard-boiled detectives is par for the course. But Jeff and Annie get into the spirit as well, taking the lawyering dead seriously, arguing their case as strongly as any real lawyers would (and no, without his degree Jeff isn't a real lawyer yet). Plus, the show constantly comments on the fact that none of these people are cops or lawyers which both deflates the setting and enhances the joke, pushing the conceit that much further. Hands down the best constructed, funniest episode of the season.