The Hitter and the Face

As I've noted in the past, I'm a big fan of the The Fast and the FuriousStarted as a film about undercover policing in the illegal street-racing community, this series has grown to encompass a number of different genres and become one of the most bankable franchises in the world. films. Although the series started slow, with the original The Fast and the Furious was little more than a Point Break rip-off (but a gloriously stupid one), the films really hit their stride with the fifth movie Fast Five, and the popcorn fun of the seventh, Furious 7. They might not be smart films but they were enjoyable at least. 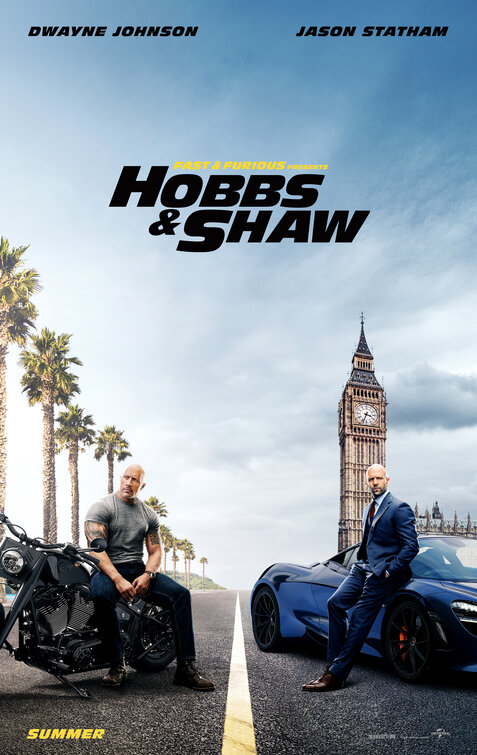 The problem for this series, and really any film franchise that just keeps going, is that the films have had to find ways to continue to escalate their storylines, too keep people engaged. This has meant bigger and bigger action with plot lines that veered further and further away from reality. Bear in mind that these area street racers, auto mechanics, and low-level hackers but somehow they've become international super-secret agents dealing with sci-fi plot lines that would make even the best James Bond villain say, "whoa, take it back a step there, mate. Your plan seems a touch implausible."

That leads us then to the semi-spin-off (and only the second film in the series to not have Vin Diesel involved in any way), Hobbs & Shaw, a movie that takes straight out of an kind of ground reality and puts us into the same kind of sci-fi espionage as Moonraker. Is the kind of completely silly, totally implausible story that would have been prime fodder for the Austin Powers films. Hell, the movie even trudges into self-parody all on its own, as if winking at the camera saying, "we know this is dumb. Just go with it." And, fact is that it almost pulls it off. If the action were bigger, or the direction better, this could have gone down as one of the dumber, but more enjoyable, films in the series. As it is, it's just dumb.

The movie opens with Hattie Shaw (Vanessa Kirby), sister of one-time villain now reformed hero Deckard Shaw (Jason Statham) and an MI6 field agent. She, and her team, are sent to secure a nasty virus but are met with resistance in the form of Brixton (Idris Elba), a mechanically-and-gentically enhanced super-soldier (who refers to himself as "Black Superman") sent to get the virus for his employers, Eteon (think SPECTRE but with better technology). Hattie injects the virus into herself so the villains can't get it, but now she's on the run, looking for a way to get the virus out of her body before it infects her (we learn that process takes about 48 hours, give or take).

The problem is that the virus is a "super virus", one capable of killing off 100% of the populace (if it's not programmed properly only to target certain people, like a eugenics Ebola). Blacklisted by MI6, who think she's defected, she has to turn to the only two people who believe she's not a killer and defector, her brother Deckard and the man he hates working with (but finds so damn effective), Luke Hobbs (Dwayne Johnson), DSS super agent. Now the three of them have to work fast if they're gonna stop the virus and keep it out of Brixton's hands, all to save the world. 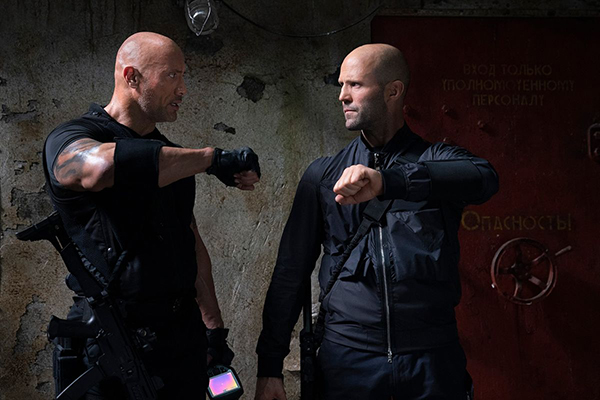 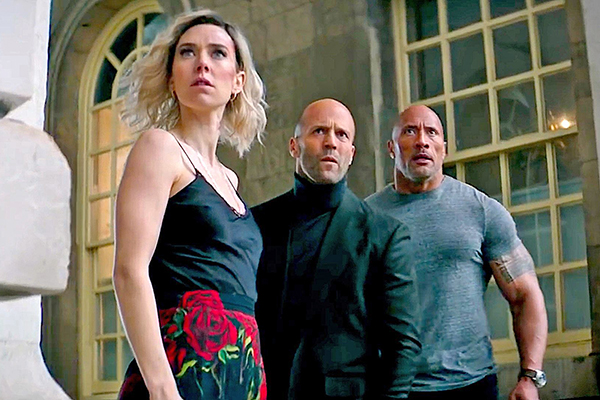 Frankly, Hobbs & Shaw stretches credulity. Yes, it's a silly spy flick that wouldn't seem out of place in the Bond universe or among the Mission: ImpossibleIntroduced in 1966, the original Mission: Impossible featured a team of agents (with varying skills) heading out into the field to solve puzzle-box like cases on a weekly basis. This simple concept spawned a long-running series, a second series in the 1980s, and a hugely successful movie franchise starring Tom Cruise that continues today. films, and if it had originated from either of those franchises I probably wouldn't have as big of an issue with it. But this film spins out of the Fast and Furious films and while those films have never been particularly believable (have you ever managed to get a car to pop a wheeley?) they did at least exist in a recognizable version of our world. But 100% deadly super viruses? Enhanced super soldiers? Total control of the Internet? These are all ideas that are treated as if they're perfectly normal in this movie when that's all science fiction in reality. It's loses the sense of the world it comes from.

It's hard to settle into a movie when I don't believe anything that's going on. Not that the film invests in any way in making the events of the film at all grounded. It starts early with a winking performance from Ryan Reynolds as a CIA handler -- who is played in true Reynolds form but sticks out like a sore thumb in this movie, let alone this series -- and then proceeds from there. The film is all over the place with its tone, veering from broad comedy to dark action but never smoothly stitching any of it together. It's a mish-mash of ideas, scenes, action, and jokes, but it never really comes together at all.

This is where I think a director with a better sense of the movie they were trying to make could have improved Hobbs & Shaw. For a while there (from Tokyo Drift through Fast & Furious 6) the films where headed by Justin Lin. While I didn't like all his movies (I felt the sixth film was a bit flabby and silly) he did have a particular directorial style that could sell all the bullshit on screen. He knew how to keep the momentum moving, how to set the tone and keep everything of-a-piece. Hobbs & Shaw director David Leitch, though, doesn't have the grace or style. He can't sell the bullshit, in essence, and lets the film get bogged down on dumb ideas and constant mugging.

Frankly I don't know if Hobbs & Shaw, as conceived here, could ever have worked at a film. Even a good director would have struggled to make the reality of the film work (especially in the context of the entire film series). But they could have at least had a better eye for the action, kept everything focused and moving. It might still have been a bad movie but it at least would have been an infinitely more watchable bad movie than the one presented here. This movie constantly stops and stutters and never manages to figure out what direction it wants to go. When it does focus -- a cool car chase through downtown London, a great finale on Samoa -- the movie nearly succeeds in presenting what we're here for: awesome car action and big explosions. But those moments are few and far between in this film. 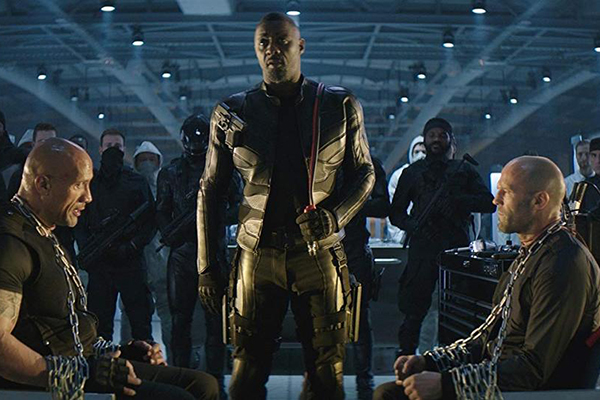 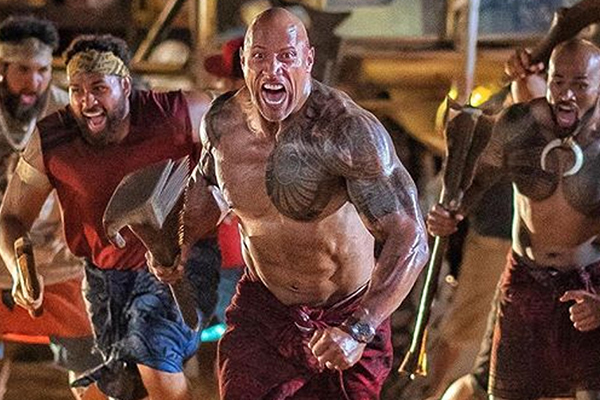 Hobbs & Shaw was a success at the box office, although not as big a success as the two previous main-line entries, making "only" $750 Mil (instead of the Billion-plus expected for this franchise at this point). That's still a strong enough showing to warrant a sequel, I'm sure, and with the way the film ends, with the evil organization down but not out and Hobbs and Shaw ready for their next mission, a sequel is all but guaranteed. I just don't know where the series could go or why they'd bother -- this film wasn't good enough to really warrant another sequel, whatever audiences might have said on the matter. It's a bad movie dressed up to look like a slightly less bad film (any of the Fast and Furious films) just without the grace of style of those better films. It exists, and gives audiences something they apparently wanted, but it's fleeting and hollow and not good enough to bother with ever again.

Perhaps before they make another Hobbs & Shaw (or any other spin-off in the series, like the female-led film they keep promising) the producers will find a better director to make the film. Also having a grounded story that felt like it existed in some form of reality would be good. For that matter, maybe also get a good script. Is that too much to ask?