Their Past Catching Up With Them

By now, with the evolution of The Fast and the FuriousStarted as a film about undercover policing in the illegal street-racing community, this series has grown to encompass a number of different genres and become one of the most bankable franchises in the world. series from a bunch of bros doing illegal crime and street-racing to a team of international espionage experts (who also happen to be bros), the series certainly couldn't just revert back to its roots. It had to keep building going bigger and bigger to chase the new thrills, the bigger action. That's the inevitable case for any action series, and this "more is more" approach was certainly there in the first movies. More cars, more sexy ladies, more crashes, and more speed. 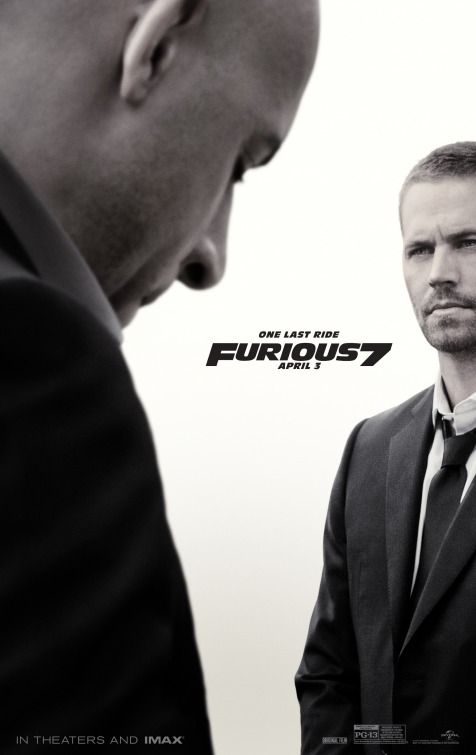 But it works. More often than not the films are able to skate by on their goofy charms, giving us characters we enjoy and plenty of high-speed thrills. No one is ever going to accuse any of these movies of being high art, but they certainly are delightful. The best of the series so far, Fast Five, managed the feat of getting us to actively invest in the characters and their goofy exploits, relishing all the high-speed action and big thrills because we had an attachment to the characters. Unfortunately the sixth film, Fast & Furious 6, stumbled a bit giving us even more of the action but losing the focus on the characters. Coming back into this seventh film, Furious 7, the series had to refocus and put them emphasis back on the main team.

Certainly, Furious 7 does just that, although that's in no small part because one of the principal leads who has been with the series since the beginning, Paul Walker, died during filming (although not directly due to a scene he was filming on set). The loss of one of the lead actors, and arguably one of two people (along with Vin Diesel) who act as the face of the series, forced the producers to realign this film as much as a memorial to Paul Walker (and his character, Brian O'Connor) as a happy, hoppy film about people driving really fast and being international spies. There are deep emotions running through the film as, clearly, everyone in the film is acknowledging time and again that Walker/O'Connor won't be on their journey past this film. This gets the team back to the forefront and helps to unify the movie in a way that the sixth film lacked.

Certainly I'm not making the case that Walker's death was a good thing, but the team did rally together to make a very good, very heartfelt movie. These films have always seemed dumb and fake, like all the actors are in on a joke. This time around, though, the actors take their characters more seriously because, obviously, there's a serious story going on behind the scenes. After this the films won't be the same, so they made every second of this one count.

The movie also redoubles its focus in ways that don't involve Paul Walker. For starters this film is the first to features a genuinely good villain. The heavies in previous films have all been lackluster, with Diesel's Dominick Toretto being the only good villain in the series (and I'd make the case that even in the first film he's less villain than anti-hero). Fast & Furious 6 featured the blandest villain in the series yet, Owen Shaw, a guy that we're told it a total, ruthless bad ass but was played ineffectually (almost sheepishly) by Luke Evans. And yet, out of that mess of a character, a better villain is born: Jason Statham's Deckard Shaw. We don't have to be told that Deckard is a bad ass because we're shown it, over and over again. 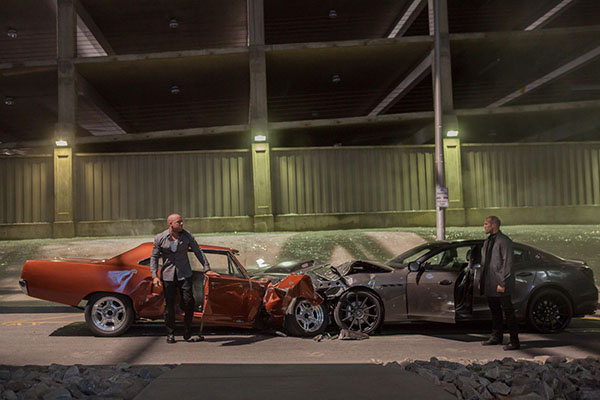 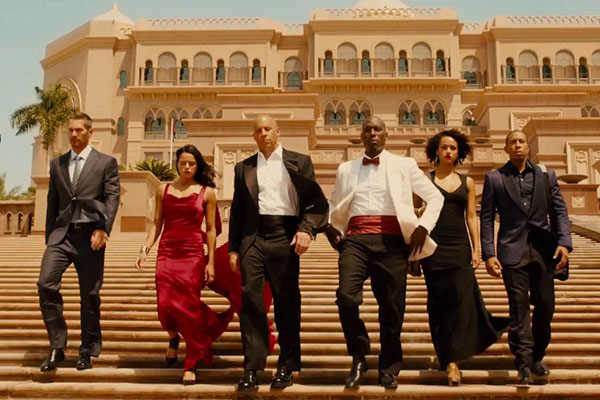 Villains in past movies have been given to us as shadowy figures, guys who stand in the background and run criminal organizations while other guys, goons and lackeys, do the actual work. Not so with Deckard Shaw; he has no lackeys, no goons, and if he wants you dead he'll show up and do the deed himself. And he'll come coming, over and over, like the Energizer Bunny of extreme vengeance. Even the opening scene sets his character up as some special. There's no speech letting us know of his crimes, no one reading a dossier to say "hey, this guy has skills." Instead we see him at the hospital visiting his brother (who's in a coma from the events of the last movie) before talking a walk back through the building and we see three floors of carnage he's left in his wake. This introduction is more effective than anything else the movie could have given us.

But what's interesting is that Shaw isn't the focus of the movie, just a presence that shows up time and again to wreck whatever plans the gang has going. Instead, their primary focus is on the God's Eye, an elite hacking tool that a villainous dictator, Mose Jakande (Djimon Hounsou), want to control so he can try and rule the world or something. In contracts to Shaw, Jakande is the usual Fast and Furious villain: shadowy, under-explained, with more words spilled about him than actions show on-screen. He's a motivator, a means to an end, while Shaw is the villain.

It works, though. It shouldn't work -- the film shouldn't have two competing villains taking up screen time as if this was some second-rate superhero movie -- and yet they never feel like they're stealing screen-time from each other, if for no other reason that the film is so goofy, so over-the-top, that it doesn't really matter. Obviously, when you come to a Fast and Furious film you're doing it for one reason -- big action -- and this film delivers on that front, too.

There are a number of set-pieces in the film that raise the bar over what's been done in the series. It's hard to imagine the series being able to top the safe heist from movie five or the tarmac plane chase from film six, and yet this film does it. Twice, no less. First, at the mid-point of the movie we get a long action sequences that starts with the team parachuting cars out of a plane before getting even more ridiculous from there. And then, as if to say "we can top this" there's a long Abu Dahbi set piece that features fist fights, fast talking, and a car driving across huge gaps between three different skyscrapers. It's stupid and ridiculous and oh so amazing. Realism has never been this series' strong suit, and Furious 7 embraces that with gleeful delight. 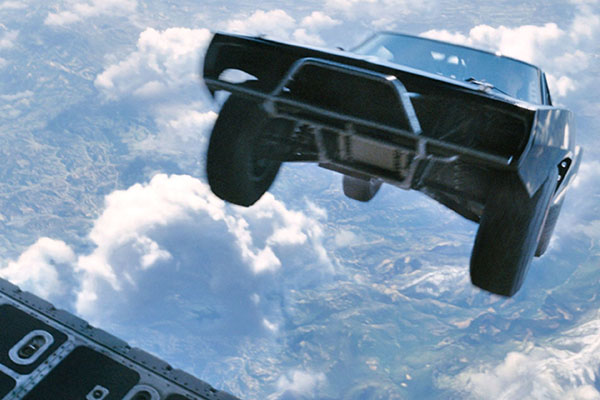 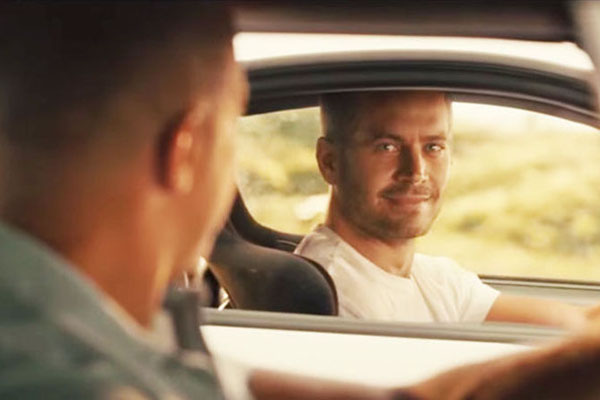 If there's any major flaw with the film it's that the last act of the movie just can't compete with the ludicrous heights of the previous action sequences. There's a decent chase sequence where the team is pursued, in cars, but a military helicopter and a drone. The action is solid enough but it's missing that gleeful delight that marked the best sections of this film. While it's a good enough conclusion to the film it doesn't quite reach the lofty heights of what came before.

Even with that exception, though, this film really does deliver. It's everything you want from a Fast and Furious film -- big, dumb action and lots of quips from a charismatic cast -- delivered at a steady clip. It might not be quite as good as Fast Five, but few big, dumb action movies ever will be.