It's All Too Much

The Fate of the Furious

When a franchise loses one of its biggest stars it can sometimes be hard for the series to recover. Some try to recast the role, but often the star was so iconic in the part the series has to try to find a way to move on with a key part of the formula missing. Sometimes it works, but often the series just isn't as good afterwards. I tend to feel like that is the case with The Fast and the FuriousStarted as a film about undercover policing in the illegal street-racing community, this series has grown to encompass a number of different genres and become one of the most bankable franchises in the world.: with the death of Paul Walker around the time of filming the seventh installment, Furious 7, the series lost a key player in the whole franchise. Walker's character, Brian O'Connor, had been in every movie except Tokyo Drift, beating out Diesel by that point. As much as I rag on his acting at times, Walker was the face of the franchise. 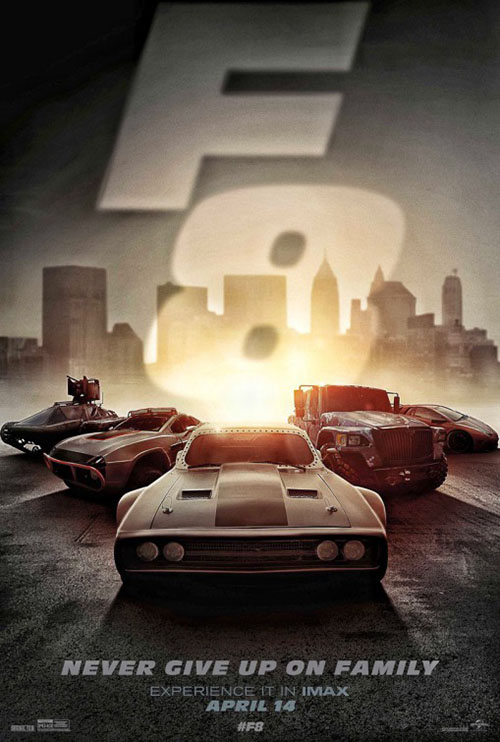 The studio certainly knew this as they contemplated just canceling the series and not releasing film seven. Instead, they found a way to finish it and make it a tribute to Walker, leading to the movie being one of the biggest installments for the franchise at the Box Office. Without Walker, though, the series had to try and find a way to carry on (because once something makes that much money, it will carry on). So we have a host of proposed spin-offs coming down the pike, such as Hobbs and Shaw and a female-led film in the works. But all of that comes from this film, The Fate of the Furious, a movie that struggles to fill the void Walker left in the cast despite the fact that it clearly doesn't know how.

Without Walker, Dwayne Johnson's Hobbs steps up to be the other lead in the film. There's a super-hacker named Cipher (Charlize Theron) is out there, pulling strings and working to steal the launch codes for nuclear weapons. One of th strings she's pulling is that of Dominick Toretto (Vin Diesel, of course) who, while on a mission with his team, betrays the rest of his crew and steals the first piece of the nuclear puzzle Cipher needs. Hurt and lost without him, the team -- Letty (Rodriguez), Roman (Gibson), Tej (Ludacris), and Ramsey (Emmanuel) -- bands together under the guidance of Hobbs and his CIA bogeyman, Mr. Nobody (Kurt Russell). They have to try to figure out how Cipher turned Dom, what the overall plan is, and how they can stop the hacker and set their friend free.

The Fate of the Furious is a deeply flawed movie and much of it stems from the loss of Walker. Because Walker's O'Connor isn't in this film the movie needs a new lead character to bounce off of Diesel, someone to share the spotlight and play up that "brotherhood" the leads always had. It was a formula the movies have all had since the first The Fast and the Furious, but Walker's shoes are hard to fill. He wasn't an alpha character, not the way Diesel's Dom is, more of the puppy dog happy to hang out with the big boys. This allowed him to lead through friendship and kindness while Dom was the gruff older brother giving stern lectures in between punching bad guys. Without Walker, the film turns to the next big star in the lineup, Johnson, and the results just aren't that great.

Johnson is a fine actor and there's no arguing with his charisma. The problem is that once you make him a lead character in the movie, it loses the Furious feel and becomes "The Rock Show". The whole dynamic of the movie is off, changing the dumb, goofy vibe of the previous films. The Rock has a different presence in the movie, changing this from a series of silly hangout films with capers, cars, and chases to something trying (and failing) to be a more high-energy action flick. While the series has always had action, it always felt like the producers were in on the joke of it, like "look at the stupid crap we can do with cars", but this time the film seems too invested in the action, loosing that wink-and-nod mentality, and I think some of that comes down to the Rock and the way his character is invested in the world. 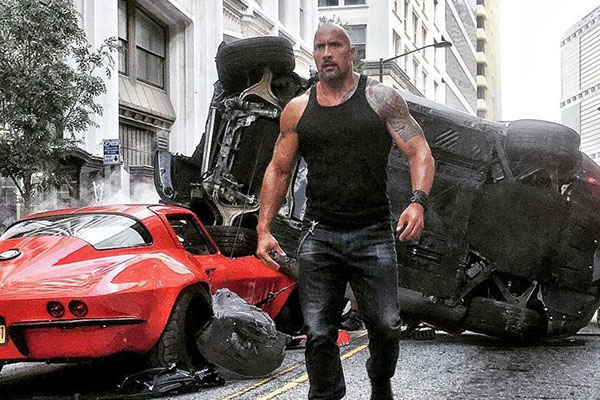 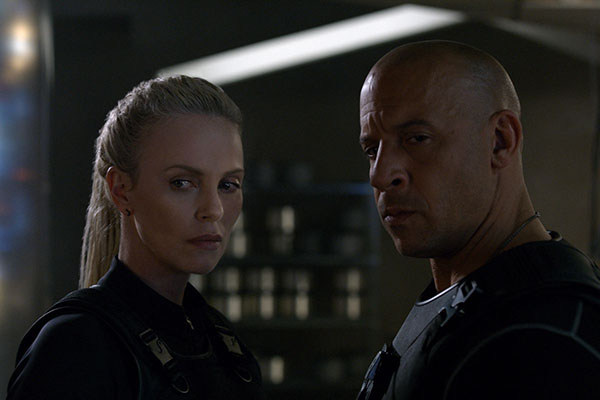 Yes, that means I'm complaining about an actor being too invested in a film, but it's true. As a good counter-point, look at Jason Statham's Deckard Shaw, brought back in this movie because he was clearly so great in the last one. His character is reinvented this time into more of an anti-hero, with many of his rough edges shaved off. It's a change I'm not really on board with as it neuters a great villain. At the same time, though, Statham really sells it just by being himself and wearing a "can you believe I'm doing this" smile on his face. These movies are ridiculous and it takes the right kind of actor to be both in the movie and yet above it at the same time. Statham's few scenes in the film (like his big action sequence on a plane near the end of the movie) are among the best in the film and it's because Statham plays it with just the right amount of humor.

Of course, putting Shaw (and his brother, and his mother now, too) into the movie along with a story about Dom and his betrayal of the team, and a hacker with nuclear desires, and the CIA (and the team's new CIA handler, Eric Reisner, played by a thoroughly underwhelming Scott Eastwood), speaks to a larger issue with the film: a lack of focus. The best films in the run (Fast Five and Furious 7) have had tight, focused plots. Yes, they were over-the-top and ridiculous, but they kept themselves focused on a single goal, working towards a single story without a lot of cruft or fluff getting in the way. Fate, though, divides its focus, not only across two main plots (one lead by Dom, one by Hobbs) but also across numerous side plots and narrative diversions, many of which don't really go anywhere and hardly serve the main plot at all.

Put another way, if the film could have just focused on Cipher -- her story, her motivations, her evil plan, and her control over Diesel -- and then let the team just beat against her over and over, it would have been better. There are so many bits and pieces that have built up in the series over time, though, and the film feels the need to slavishly give all of them lip services. We don't need to see a long scene of Hobbs coaching his daughter at a soccer game, we don't need a long and tedious plot line about Tej and Roman hitting on Ramsey, and we certainly don't need the constant check-ins on Dom to see his side of things, all of which serves to deflate the tension in the plot.

That would mean that Dom wouldn't be a lead character, that's true. Instead of being the primary force in a movie, he would have needed to take a backseat, become a shadowy force like the hacker he was "working" for. In my head, that would make him more like Deckard Shaw in Furious 7, a guy that shows up specifically to ruin the plans of the team, and the disappear before anyone can catch him. Instead of revealing why Dom turned on the team (it was because Cipher found his ex-girlfriend, Elena, who had a kid with Dom that Dom didn't know about, and now Cipher is using the kid as control over Dom) early in the film, that whole plot line could have been kept a mystery right up until a big reveal late in the movie. It would have re-contextualized everything Dom did up to that point and served as a big twist to up the stakes of the movie. Of course, Diesel is a big star so I doubt he would have wanted to take a backseat in his own franchise. 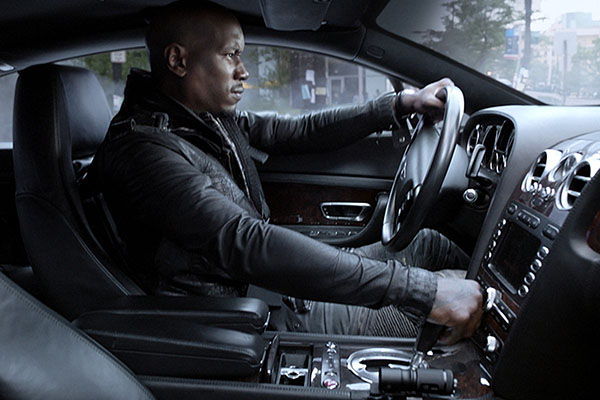 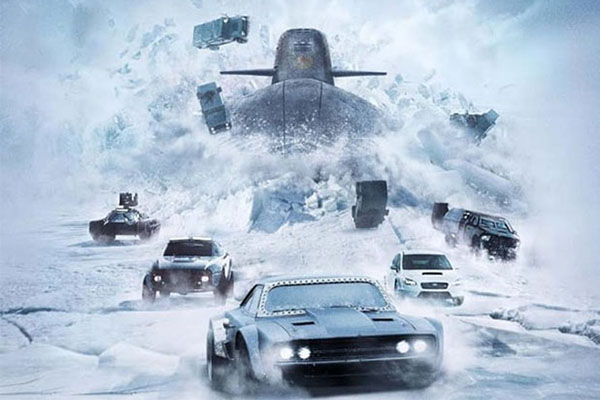 So if that story couldn't have worked, maybe have Cipher send them a video message at the start of the film saying, "Dom, I have your kid, so back off or everything you love with die." That would lead the team on a different mission that would (a) require them to try and covertly stop Cipher while also (b) reclaiming the kid. That feels like a heist film, not unlike Fast Five in a way, and certainly would have allowed the team to remain together, stay focused, and keep the plot line tight.

But that's not where this franchise is at this point. After eight movies now the series has become bloated with too many characters, too many stories, and too much going on. Without the clear dynamic between Walker and Diesel to root the movie, The Fate of the Furious spins off in every direction, creating a lot of sound without much fury (pun intended). This film hardly feels like a Furious movie (especially after we get past a movie-opening street race), getting too caught up in all it's spy talk, big gadgets, and international intrigue. It's less a Furious movie than a latter-day James Bond or Jason Bourne: bloated and tedious.