A Cold Glass of Dom

The Fast and the Furious

It's easy for film critics to dismiss the first The Fast and the FuriousStarted as a film about undercover policing in the illegal street-racing community, this series has grown to encompass a number of different genres and become one of the most bankable franchises in the world. film. It looks, for all appearances, like a big, dumb car movie popularizing a pretty macho, stupid culture -- illegal street racing -- and it seems like it wallows in its own cheesy stupidity. Many say it's a bigger, dumber Point Break (which, considering how dumb that movie is, would be quite an achievement). Taken on its own, this film seems pretty darn stupid all around. 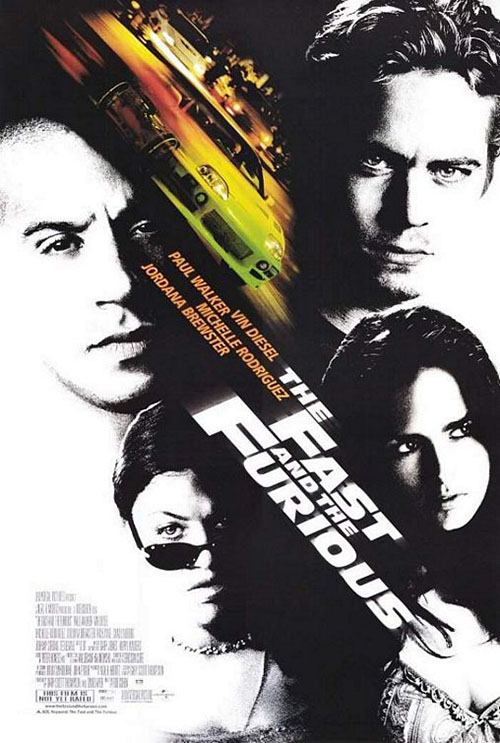 Normally in a review such as this, I would follow all of that with a "but". There's no "but", though; The Fast and the Furious is a big dumb movie. It does wallow in its own stupidity, relishing its cheesy dialogue and low-rent actors while it tells a pretty macho story that shares more than a little DNA with Point Break. It's all the things people complain about, and I think that's part of why it's such an enjoyable movie. It knows exactly what it is and instead of trying to dress it up, to make itself into a "good" flick, it makes the best version of itself it can without changing any of it core elements.

To answer the criticism that's stuck around the longest: yes, from a certain angle the film does look like a Mad Libs version of Point Break where all the terms for "surfing" were replaced with car talk instead. Paul Walker plays Brian O'Connor, an undercover police officer investigating a series of high-speed semi-truck thefts involved three black, nondescript (well, aside from the green neon under them) street racing cars. The drivers come up, hook-shot their way into the vehicles, and then make off with whatever booty is in the trucks; it's like street piracy. The FBI, in coordination with the LAPD, have tracked the thefts down to the local street racing culture, and Brian is sent into try and find out which street team is involved.

That's where the other big star of the movie, Vin Diesel, comes in. Diesel plays Dominick Toretto, the leader of one of the teams and essentially the godfather of the street racing scene. Brian worms his way into Dominick's good graces and, eventually, becomes a de facto member of the team. Although he doesn't want to turn his eyes towards Dominick's own team, partially because he's become friends will the gang (and fallen for Toretto's sister, Mia, played by Jordana Brewster), but after all his other leads fail to pan out, Brian has the admit the truth: Dominick is the ringleader of the pirates and it's up to Brian to take him down.

If you compare the film to Point Break, there is a lot that's similar. Gangs of sport-themed thieves go after big scores and no one is able to figure out just who is doing it. The undercover cop, a relative newbie at the sport, jumps in head first, somehow endears himself to the ringleader, and begins to think of the team of outlaws as his new family, "going native" if you will. Eventually, after a few false leads, the cop figures out his new friend is also the bad guy, which leads to a climactic confrontation and, eventually, the bad guy riding off into the sunset, presumably to die or get caught by the police or whatever (they get their Shane moment, basically). And, sure, if you thought the whole concept of Point Break was dumb, another movie following similar beats won't win you over at all. 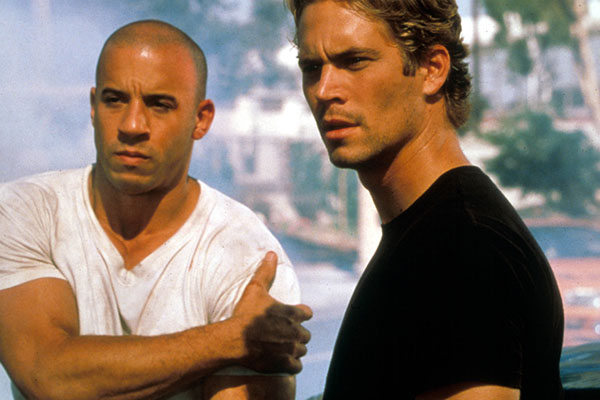 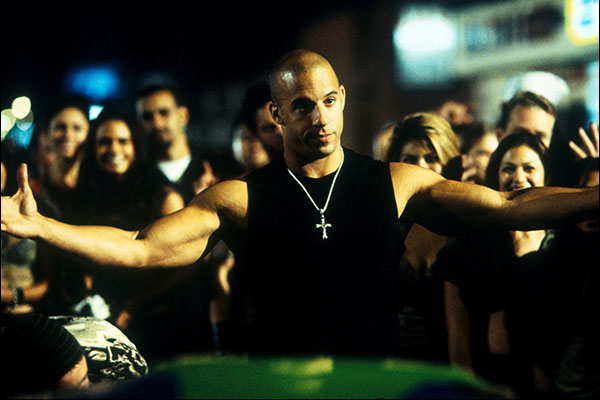 That's because this movie is dumb, in different ways from the surfing movie that preceded it. For starters it's never once explained how the cops figure out it's an L.A. street racing gang that's robbing the trucks. Sure, the cars are stupidly over-the-top (again, if you're trying to be stealthy, why would you put bright green neon under all your illegal cars?) but the trucks are robbed on the open highway, so why is L.A. the most likely home for the robbers and not San Francisco or any one of a number of other decently sized cities along the California coast. What evidence to they have against Toretto, and, if they have evidence, why is there all this confusion about who might actually be leading the robbers?

And then there's the crimes themselves, which leave all kinds of other questions unanswered. Toretto doesn't run a chop shop, so what happens to the trucks after he's done? Does he have a fence to sell the goods (goods that are never actually told to us by name so we really don't know what he's stealing) and if so, who? Do they handle the trucks, too? This is the kind of stuff that should be established so that we can understand the case being brought against Toretto. Plus, if we knew how their case was built (instead of just dropping us in the middle of it with blade Paul Walker as our guide) maybe understand the whole plot better. Maybe it would have tied together if the movie could have treated the investigation as a real thing instead of just a plot device.

At the same time, though, the shallowness of the police drama does land the focus solely on the street racing, and there's no doubt that The Fast and the Furious handles this better than other films to come out around and after the release of this movie. Flicks like Torque and shows like Fastlane try to ape the style of The Fast and the Furious without any of the depth to it. They can't get the mix of the elements just right and end up creating something dumber than this movie.

This film does have it's own kind of substance to it. Sure, the storytelling is pretty shallow, and there's never any doubt that Toretto is the bad guy all along (well, antagonist, really). But, at the same time, the main characters are all given depth. They're allowed to become real, breathing characters with motivations, ideals, and dreams. When Brian reveals he's been a cop all along, you get a real sense of the pain this causes Mia and Dominick because they've all developed real bonds. Later films harp on this bond later, saying the movies are all about "family", but here you actually do get a sense of a deep, real, almost familiar connect building among the leads. 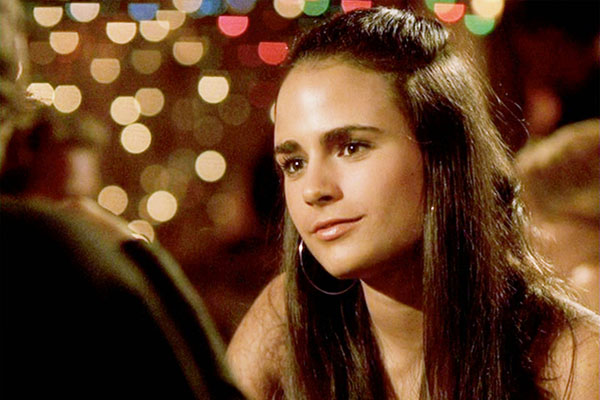 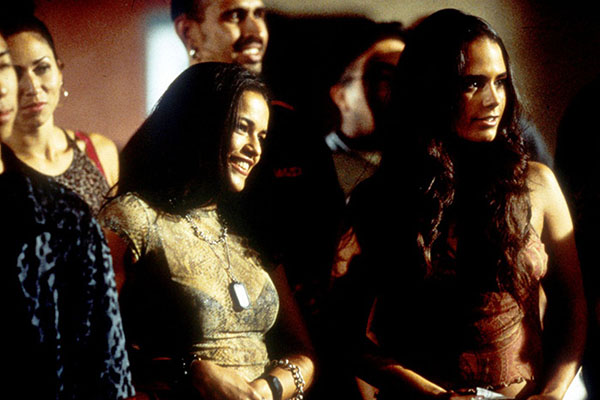 There's a reason the best films of this series going forward are the ones that rely on the core dynamic between Dominick, Mia, and Brian. These three have the best chemistry, the strongest and most well-developed bond among all the characters. It allows for deeper storytelling, and also strong call-backs to previous material. It works here, in this film, and it gets better as the series moves on and brings all three of these core cast members back.

That said, of all the actors in this movie, Paul Walker is easily the weakest of the set. Vin Diesel, often thought of as a big, hulking beefcake, does put in some solid acting as Dominick Toretto. The character is kind of shallow here, mostly speaking platitudes and acting macho, but largely the fault of the script he was given (and, sure, maybe a little due to how green he was at the time). He has natural charisma that he's able to bring out to sell his character as best as he can (he was cast in Saving Private Ryan for a reason), and this is the element of the performance Walker lacks. Paul's Brian is all puppy dog charm and vapid style, but there's less substance here than there should be. He's at his best when acting across from Diesel, or Brewster, who both get great performances out of the actor. On his own, though, he fails to sell the story of his character.

It would take some time for these films to really settle on their style to make the street racing look cool like it should. This film tried, augmenting the car action with a bit of CGI and a lot of shaky cam to make the car looks fast. Director Rob Cohen, though, just didn't have the chops to make this kind of movie work and, were it not for the actors, it's easy to see a version of this film that's a total bomb. After all, this is also the guy who could squander Diesel in xXx and then fail to make a monster movie even half as good as its predecessors when he directed The Mummy: Curse of the Dragon Emperor. He's a hack, basically, who happened to luck into this solid action film.

There are some solid set pieces in this movie, ones that aren't ruined by an overuse of CGI or bad editing. The climactic truck robbery that caps the second act features a solid bit of vehicular mayhem, upping the stakes at a regular pace and really sucking you in to the tension of the proceedings. Then there's the final big chase between Brian, Dom, and a rival Asian street gang. That one features cars and bikes, a decent bit of gun play, and a great drag race at the end. Moments like that show the potential for the series once it could get out of Cohen's control.

Plus, let's also note the fact that the film is fairly inclusive. Sure, the two male leads are both white, but the female leads -- Brewster along with Dom's love interest played by Michelle Rodriguez -- are Latina. And while, yes, neither of the female leads have as meaty of a story as the bromance at the middle they also aren't simply eye-candy either. They each get to have their moments in cars, doing the driving and getting in on the action. Plus there are all the other gangs, most of whom are made up of people of color, and very few of which turn out to be villains in any capacity. For a film made when it did, this movie was more inclusive than most, a trend the movies have continued throughout the series.

Watching the film again, I was reminded how corny and cheesy it is at times. There are big, dumb moments and questionable little decisions throughout. But there's also a strong chemistry between the leads, and plenty of great moments to balance out the bad. I'm never going to try and make the argument that The Fast and the Furious is high cinema (far from it, in fact), but for the film it wants to be, it plays its role well.

If all you want is a solid film about street racing, one with plenty of now somewhat aging early 21st century touches -- CRT screens, crappy old phones, car tech that was probably already ancient by the time the first sequel came out -- this is the movie for you. It's dumb, it's silly, but it's fun. Sometimes, fun is all you need from your action cinema.