When we talked about the first The Fast and the Furious film, I noted that those people that hate on the movie do so because it's dumb and stupid and full of macho-inane bull, and while all of that is true for that movie, it somehow manages to transcend those qualities (or, really, use them as an advantage) make a movie that, while not smart, is at least enjoyably dumb. The movie pulls off a pretty impressive feat, crafting something pretty good out of elements that are hot garbage. 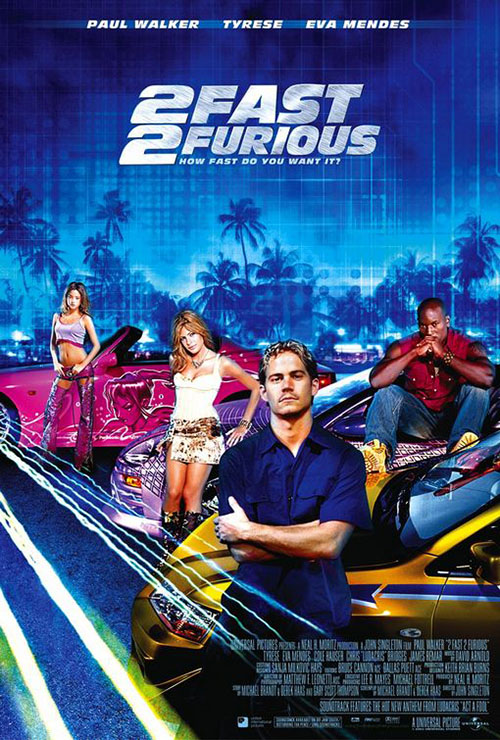 For a case-in-point in that regard, look no further than the first sequel in The Fast and the FuriousStarted as a film about undercover policing in the illegal street-racing community, this series has grown to encompass a number of different genres and become one of the most bankable franchises in the world. series, 2 Fast 2 Furious, which manages to have all the same elements and none of the intelligence about how to use it. This is the first movie in the series to really buy in to the big, dumb car movie mentality the first film gets accused of. And, really, we can trace all the issues back to the fact that Vin Diesel isn't in the film, a statement I never thought I'd actually say in my life. At the time of developing this movie, Diesel dropped out to instead make a different sequel, The Chronicles of Riddick (the vote is still out if that was a sound idea). So the proposed movie had to be redeveloped with only Paul Walker returning in a lead role, and, well... In this case maybe they should have thought things through.

I'm not going to tear 2 Fast 2 Furious as much as you might expect. It is a pretty crappy movie, yes, but there are elements of it that do work. There are new characters introduced here that really work, and end up coming back time and again later in the franchise. The film also features markedly better cinematography and action direction. In many ways it could be considered an improvement over the original so long as you don't try to pay attention to the story or the acting. Once you focus on that, though, the film kind of falls apart.

Firstly, the movie's story is a total mess. Obviously setup to pair Walker's Brian O'Connor with Diesel's Dominick Toretto, we instead have O'Connor getting caught by U.S. Customs Enforcement so they can use him as an undercover agent to work a case. Needing a second driver to help him sell the ruse, O'Connor taps childhood friend Roman Pearce (Tyrese Gibson) to act as his second. They then have to prove their driving skills to criminal boss Carter Verone (Cole Hauser) while getting assistance from undercover Custom's agent Monica Fuentes (Eva Mendes), all so they can then be let in on the big plan. Verone is planning to flee the country but he needs a stash of ill-gotten money first. That's where the drivers come in: they go, get the money, and bring it to a private airfield where Verone will pick it up and skip town. Now the guys just have to ensure that Customs knows where the drop is and get there before Verone flees.

So, in essence, the film hinges on a similar story to the first film: O'Connor has to infiltrate a gang, prove his driving prowess, gain their trust, and then take them down from the inside. Sure, the details are different, but it's hard to shake the feeling that, in some ways, we've seen all this before. Brian going undercover is nothing new, and the fact that the new villain, Verone, is a one-note bad guy that barely appears in the film certainly doesn't help the film seem any less shallow. 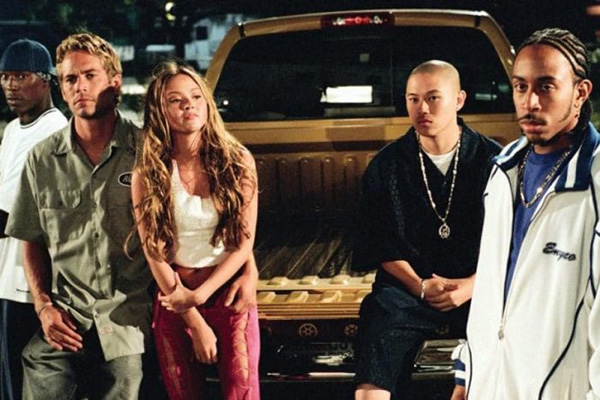 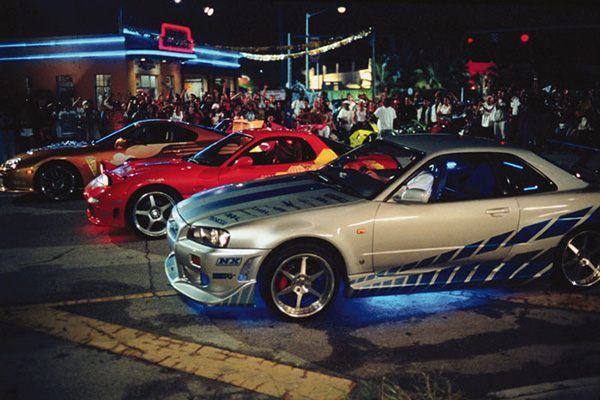 Plus, Verone's plan is a tad half-baked. He wants his money to get from where it's stashed (in a safe house that is under guard by the police because they know it's a stash house) to the drop point, and he wants it there fast. I guess that makes sense, if you think that the only important part of the plan is getting from one part of the city to another as fast as possible. What doesn't make sense is why he'd hire a bunch of guys that drive the flashiest, most overt cars in the county. Also, having known criminals (i.e., people likely arrested repeatedly for illegal street racing) transport your money is pretty dumb -- they'll already be on the radar of the cops, and will likely be the first suspects followed if the police need to track down likely drivers.

The dumbest part, though, is that during the final mission, verone has his own men ride along with O'Connor and Pearce to ensure the money doesn't just get swiped. While I understand Verone not trusting a couple of street thugs (that's good business sense), if the goal was to get the money across town without the cops being able to pin it on the criminal boss, would would he willingly put known associates in the cars? That's just stacking the case for the cops.

Obviously the movie addresses all of this by ignoring it altogether. The point of the movie isn't to get invested in the police investigation or the criminal mastermind's plans, but instead to enjoy all the fast driving and pretty cars. At least on this front the movie does deliver, crafting a number of pretty solid action sequences for the characters to navigate. These sections are vastly improved over the original film, featuring longer stretches of driving beyond the simple drag racing of the first film. Clearly the director and cinematographer for 2 Fast 2 Furious watched the first movie and walked away from it with the right lesson: if this movie is going to loud, fast, and dumb, the least we can do is make it bigger in every regard.

That's why we get an opening race sequence around empty streets of Miami with big turns, high speed, and a raised jump near the end. That's why we have a high speed chase late in the film featuring more crashed cop cars than a Blues Brother's film. And that's why the climax of the film ends with a car crashing into a boat. If the universe only gives you cars, then you're going to hammer in every nail you can with the only tool at your disposal. 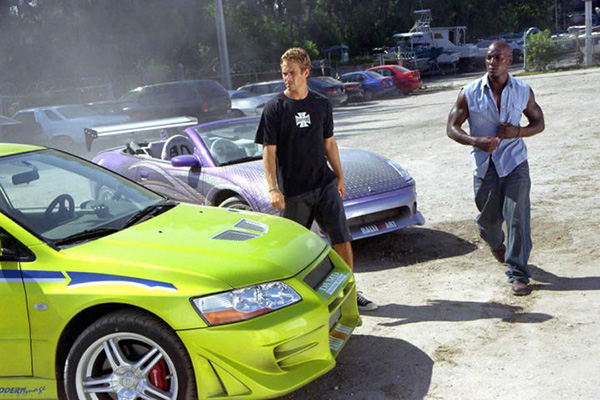 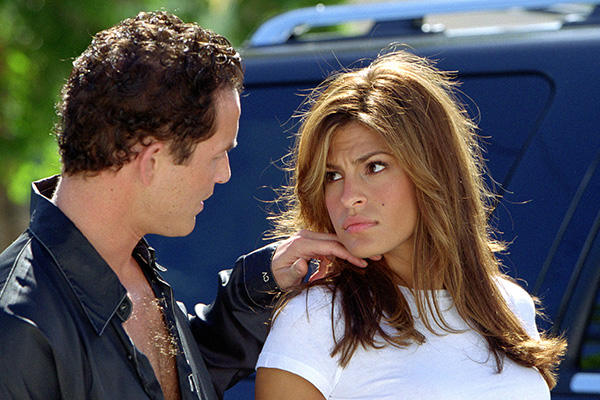 Beyond the great action we also have a couple of new characters added in this film that instantly shine. Gibson's Roman Pearce is a very different character from Dominick Toretto, a street tough with a constantly running mouth. While he's as big and burly as Dom, he doesn't have the same brooding sensibility, wearing his emotions on his sleeves. Gibson does a solid job with the character, playing him with the right amount of bravado to make the character endearing.

And then there's Tej, mechanic and criminal ringleader played by Ludacris. Although Tej is eventually reinvented for later films, becoming more of a tech whiz than just a all around criminal wheeler-and-dealer, the core personality of the character in set in this film, and it works. Tej has style and humor, and even if he only shows up in a few scenes, Ludacris makes the most of the screen time he's given.

Really, the biggest failing of the movie is the same as in the first film: Paul Walker. He does eventually grow into a decent actor as these movies go on, but he's still too green in this film. When he's talking cars, or playing a straight-laced police type, Walker nails the role. When he has to put on bluster, or act tough, though, the O'Connor character falls apart. Walker just wasn't capable of playing the heavy in any capacity, and the scenes where he's required to use that side of the character are laughable at best.

On the whole, 2 Fast 2 Furious is a letdown, even when you consider the fairly low bar the first film set. It tries hard to craft a solid film, but failings with the lead actor and in the story itself drag down the production. It's watchable, and delightfully goofy at times, but nowhere near as strong as the first film. It's best legacy, then, is in its new characters who will show up again down the road.