You know what The Fast and the FuriousStarted as a film about undercover policing in the illegal street-racing community, this series has grown to encompass a number of different genres and become one of the most bankable franchises in the world. lacks? Motorcycles. This vehicles can be as fast as cars and can do things that cars can't. They're better, right? Well, that's the pitch of Torque, a film that wanted to play in the Furious pool but tried to stake its own territory in the process, and it did so in the dumbest ways possible. It's film desperately wanting to be cool and edgy but didn't really have any clue how to do that. Even the worst Fast and Furious movies (like 2 Fast 2 Furious and Tokyo Drift) have more ineffable cool in a single scene of their movies than Torque is able to muster in its entire runtime. 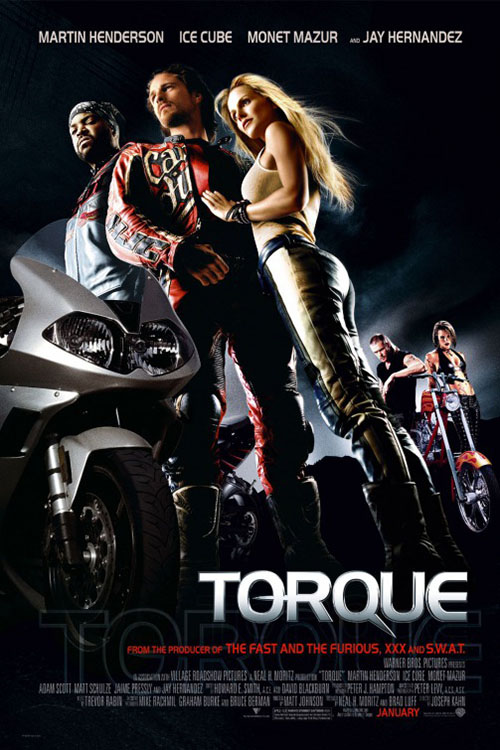 In the film we have biker Cary Ford (Martin Henderson) who, years earlier, got caught up in a drug deal gone wrong years earlier. Ford fled the country, bailing on his girlfriend, Shane (Monet Mazur), and best friends Dalton (Jay Hernandez) and Val (Will Yun Lee). Now, after all that time, Ford is back to try and set things right. He has the drugs that the dealer/evil biker Henry James (Matt Schilze) wants, and want to make a deal with him. Only problem is a couple of FBI agents, McPherson (Adam Scott) and Henderson (Justina Machado), who want to arrest Ford and muck up everything. Oh, and because of the deal gone wrong, James frames Ford for murder, which puts a rival biker gang (lead by Ice Cube's Trey Wallace) on Ford's heels as well. Ford will have to get everyone in the same place, clear his name, and ensure that James faces justice before everything is said and done.

Made in the wake of 2 Fast 2 Furious, Torque is film clearly designed in the mold of early Furious films. Everything is about illegal street racing (bikes this time, of course), drug deals, and shady villains. Much of the film feels like a carbon copy of the first The Fast and the Furious movie. You have a goofy lead guy (Henderson), a gruff girlfriend with a heart of gold (Mazur), his rival (Cube) who eventually becomes his friend, and shady, cartoonish gang of racers for our hero to bounce off of. The biggest difference, really, is that the film ditches the undercover cop aspect of the film, instead externalizing the FBI as a foe for our heroes. Even then, though, it's hard to shake the feeling that we've seen all this before.

If it had cars in it instead of bikes, Torque could be an early Furious movie and you'd hardly be able to tell the difference. The film specifically pitches itself as "better than The Fast and the Furious", name-checking specific lines from the more famous series and directly calling out that other movie, but it never does anything to actually elevate itself above the Furious films.

Much of the fault lies at the feet of director Joseph Kahn, a music video director hired to helm this film. This was his first big movie (and, also, his last from the look of his filmography) and he was clearly, woefully unprepared to direct a movie like this. His action scenes are sloppy, choppy affairs that probably looked better on paper than they do on the screen. Kahn has to supplement a lot of CGI to make many of the sequences work, so that even when the film is using practical effects it all seems fake and stagy. The film has very little of the tension or force in its action sequence that even the lowest of the Furious movies could offer. 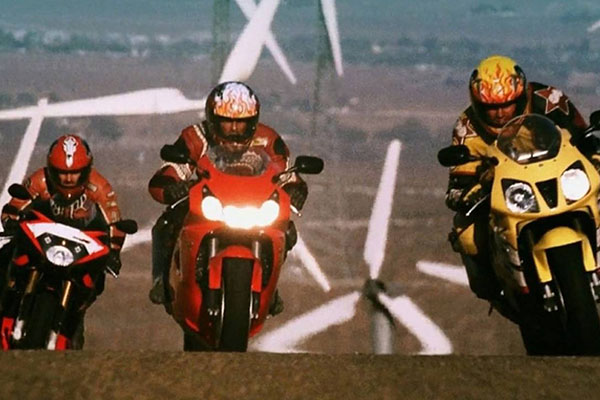 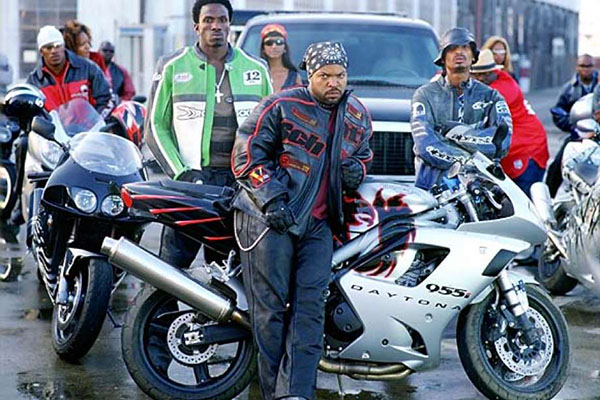 Of course, part of that problem is the fact that bikes just aren't as easy to work with as cars. When you want to smash two cars together you can easily just put a stunt dummy in there and smash the cars. Even if you're using real people in the vehicles, there are all kinds of safety devices -- straps, airbags, roll cages -- that you can use to minimize loss of life. Bikes, though, don't afford that same level of safety so to keep the stunt performers alive the film has to employ a lot more cuts, a lot more faked effects, and much more CGI. That's a hard thing to sell even for a good, experienced director. This was Kahn's first big movie and he just couldn't manage to make it work. Maybe if he'd been hired to direct a Furious movie he could have made it work. This film just had higher demands and it couldn't come together.

Even if the action had been good, the film's plot is lacking. It all boils down to a drug deal gone bad, but we're never actually shown the original events, just told about them. That means that all our investment in the characters has to come from what they do after this big event, and the story barely shades any of this in. Ford is a total void, a smiling face who keeps most of his story secret until late in the movie. Everyone around him is a caricature, a cartoon version of some kind of biker trope without any nuance behind them. Sure, the actors try to sell their material (to varying effect), but there just isn't enough here to latch onto. The story is thin so the film tries to pad it out with action sequences, but because the action in the film sucks there's very little to keep the movie together.

Plus, honestly, the film just has too much going on while it's barely explaining any of it. You have the hero team, the evil drug-dealing bikers, the rival bikers wanting street justices, and two FBI agents. If some of this could have been pared out it would have given the story more time to breathe, to maybe flesh out its characters and setting better. If, say, the FBI agents had been ditched we could have primarily focused on our heroes, framed for murder, and the other guys wanting justice. Watching them chase after each other before uniting to take out the real bad guys would have been enough story right there. But that story apparently wasn't busy enough for Torque.

Then there's the climax, a sequence where buildings blow up, FBI agents die, and a super-bike is driven across city streets as face-melting speeds. After all this carnage (where, remember, FBI agents die, whether they deserved it or not), the heroes get on their bikes and ride off into the sunset as if everything is solved. The heroes get a happy ending when, in reality, everyone should be in handcuffs led away by DHS to live in a hole for the rest of their lives (if they weren't simply shot on sight). The film wants us to believe that street justice can be forgiven when even the Furious movies were smart enough to have some kind of consequences for the carnage the heroes regularly caused. 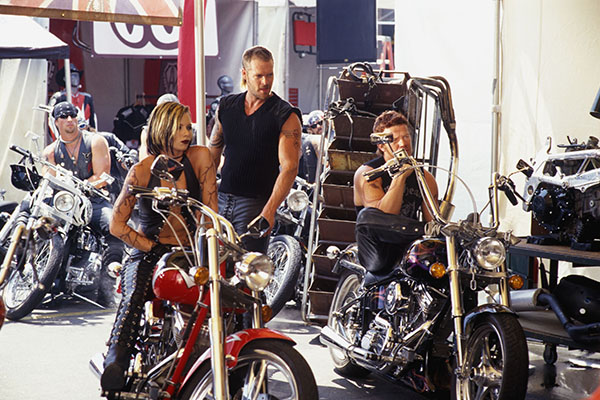 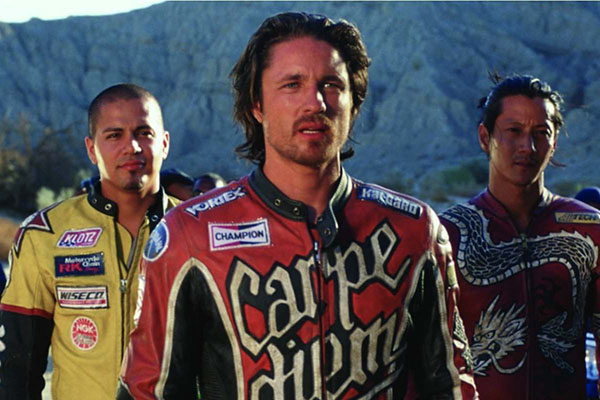 Torque is, in short, a total mess. I knew going in that the movie wasn't going to be good -- it's a Furious-clone that, even months later, everyone had forgotten existed -- but I was unprepared for just how bad the movie was. It's trash, not even good enough to be considered "so bad it's good." I went in just wanting a dumb movie I could enjoy, but Torque couldn't even give me that. For a movie that so desperately called out the bigger franchise, Torque failed to deliver even the campy thrills of the series it was aping. I guess there's a reason there are eight Furious movies and counting now while no one has ever thought to revisit the world of Torque.