War for the Planet of the Apes

When Dawn of the Planet of the Apes ended on a bit of a cliffhanger, with the humans preparing for war to decide who would rule the Planet of the ApesAlthough originally started with the 1963 novel, La Planete des singes, it's fair to say that the Apes franchise truly began with the 1968 film that kick started the original Fox film series and has helped tto keep these intelligent primates in the public conciousness for years., everyone expected a sequel would happen. The question was just what, exactly, the end result would be. Would the films continue to follow the script, more or less, of the 1968 saga -- Rise for Escape, Dawn for Conquest, War for Battle -- or would the movies forge their own path, leading to more sequels in a new version of the future? 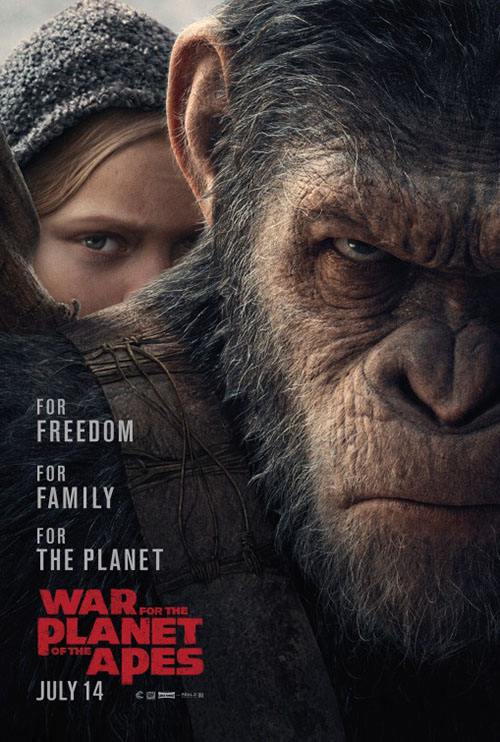 The answer, honestly, is somewhere in between. For me the films never really felt like they were creating a parallel course to the 1968 series. I know fans (and reviewers) Online tried to sell the parallels between the movies, but without the fear of nuclear annihilation fueling the Sci-Fi of the series, the Rise saga had a very different world to construct, different reasons for the apes to exist and different threats they'd face from the humans. While some superficial parallels remained (if you really wanted to try and force them), this third film feels like a very different movie from anything that came before, half revenge-fueled road trip, half heist-style prison break. It's good, and it's different, and it allows for a very different path for the movies to take if and when another Apes movie comes out.

In the film, five years have passed since the confrontation between humans and apes in Dawn of the Planet of the Apes, and things have not improved between the two sides. The human military unit, lead by the Colonel (Woody Harrelson), constantly harasses the apes, pushing them further and further back, but both sides are constantly suffering losses. A secret raid on the ape home base is supposed to take out Caesar (Andy Serkis, of course), but only manages to kill his wife and eldest child. This puts Caesar on his heels and forces him to make a choice. He sends most of his pack off to find refuge in the dessert prairie further south while he ventures north, accompanied by orang Maurice (Karin Konoval), chimp Rocket (Terry Notary), and and gorilla Red (Ty Olsson). The apes don't think Caesar should leave the pack, but our fearless leader sees nothing but anger and wants his revenge.

Traveling north, the apes make a couple of discoveries. First, the humans are continuing to suffer the effects of the virus that wiped out so many before. It's mutated and now attacks the speech centers of the brain, making humans unable to speak (in a nice parallel to the original series). They also find that other apes, outside their original group, have also become intelligent, such as the one called Bad Ape (Steve Zahn) who joins their group. But then the apes run into trouble when they find their whole big pack was captured by the humans and taken to a military base, the same base Caesar was headed to the whole time. Caesar and his crew have to figure out a way to save the apes, stop the humans, and maybe find some kind of refuge before the War for the Planet of the Apes kills them all.

Although the previous films in the Rise series haven't exactly been happy-go-lucky, there have been moments of levity and happiness. Of course, the fact that a virus wipes out most of humanity and take the rest to the brink did set the films on a darker path, and that path concludes at its darkest place with War. It's a deep, angry movie without much hope, but that helps to underline the changes the character have gone through. The Caesar we see here isn't as kind, or hopefully, as he was in the past as the war has slowly worn him down. That's part of what sells Caesar's quest for revenge -- without the darkness of the opening scenes, the carnage and the violence and the war, it'd be hard to believe that the Caesar we've seen for two movies leading up to this would suddenly go off to sate his blood lust when, up until now, he didn't exhibit any. 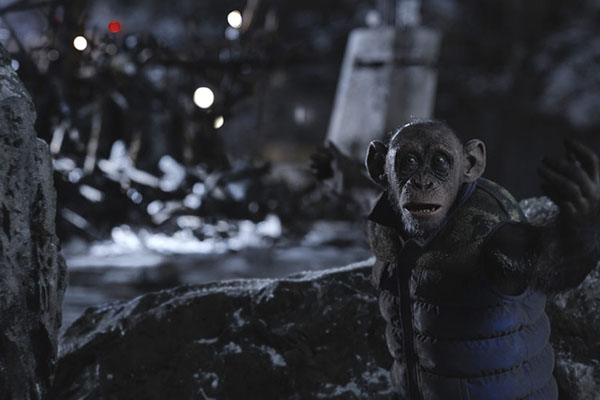 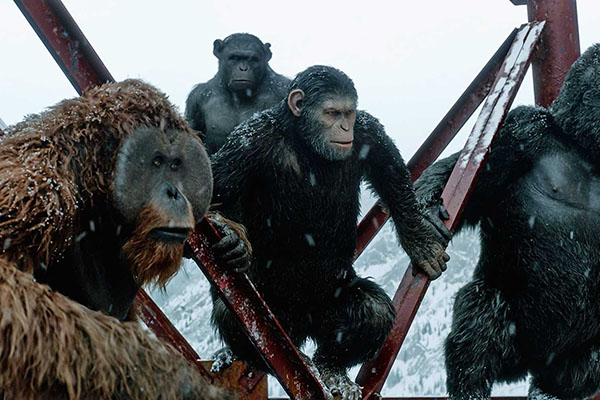 Of course, the film does try to comment on this as well. The other apes are shocked that he'd willing go off on his quest, that he'd abandon everyone to do something so selfish. But then, the film wants Caesar to act as a reflection of the Colonel, to feel the kinds of rage and hate that the military lead feels. The Colonel blames the apes for all the losses the humans suffered, not the least of which was his own son who died due to the changing plague. Each side blames the other, hates the other, and vows to get the revenge. Having Caesar go down this path means that once again the film doesn't give us clear cut good guys or bad guys. Everyone has understandable motivation, everyone is a sinner. It's not under the last act, when we really see the depravity of the humans, that we see how far their fear has led them, that we truly see them as villains, but by then Caesar has already gone very far down his path as well, killed humans (and at least one ape) and become the exact thing he never wanted to be.

Do remember that in the last movie, Caesar had to kill Koba because Koba led the apes to war, killed other apes, and caused more damage than good. Caesar doesn't want to be Koba but, as he soon realizes, he has hate he can't let go over, fear he get rid of. He's in the darkness with no way out, and whatever world the apes find next, he can't really be a part of it. There's a sense of finality to this movie, that whatever happens next, Caesar can't be part of it. He might be the ones that led the apes out of darkness to the promised land, but he's a creation of the wold world, mired in the darkness that constantly finds him. He's the leader they needed, but they won't need him after this.

All of that is conveyed by Caesar; he's the central figure of the film, the leader and main character. By contrast we never gain an equivalent character for the humans. The Colonel is set up as his equal, is played well by Harrelson, but he doesn't get anywhere near the screen time or development to make him an equal to Caesar. he has the power base, the men, and the equipment, but not the screen time to back it up. He remains and shadowy figure, a promise of violence, a scenery-chewing creature when he appears, but he's not really a solid villain. He doesn't have the same level of development as Koba in the second movie, so while we understand where the humans are coming from, we don't really understand their leader. He's just a guy, evil and mean, who really hates apes.

This is what really holds back the film from being quite as good as the predecessors. While the action is bigger (with quite a thrilling climax) and the ape effects are phenomenal, it feels like there's a core element that's missing. Dawn featured humans as allies, characters we could learn about and gain a feel for the human civilization, to see them as real people. Here, the humans are pushed to the brink and stop acting like people. Maybe that's realistic, maybe it's what would really happen, but because we only really get the apes' side of things, only see how they react to the situations and the world, we can't really know the humans. We need to know them to understand them, and we need to understand them for them to be effective as mirror-image villains for our heroes. The setup is there but the development is not. 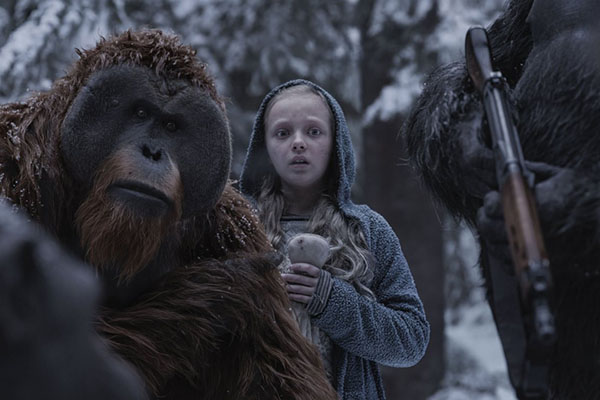 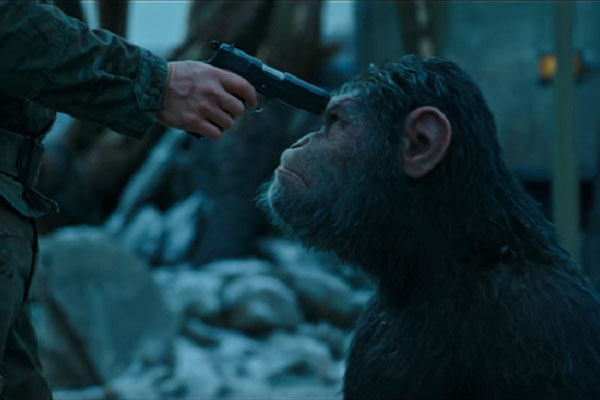 And then the film gives us a pat, super-happy ending. It's almost like the studio didn't expect to make any more films after this (despite the obvious setup to jump forward in time and give us a new version of the original Planet of the Apes (especially since we saw Taylor's ship, the Icarus, launch and get promptly lost in the background of Rise). This film is a conclusion of one story, but it rushed to the end to show us everything will be okay in the future. There's potential for more sequels, the studio just has to realize they can do it, and the ending of the film makes me think that's not the case.

When Disney bought Fox, Planet of the Apes was one of the franchises they listed for continuations and/or reboots. With the way War for the Planet of the Apes ended, both could be done: a continuation set in the distant future would feel like a reboot, and as long as they kept the ape effects from these movies, it's still feel of-a-piece with the Rise series. Despite the flaws of this movie, it's still a solid adventure and a decent conclusion to this trilogy. I just hope the studios decide to continue it (and not do some kind of Tim Burton-style reboot). There are more stories to tell on this Planet of the Apes, and Andy Serkis deserves to show us this brave new future.