Beneath the Planet of the Apes

When we talked about the first film in the Planet of the ApesAlthough originally started with the 1963 novel, La Planete des singes, it's fair to say that the Apes franchise truly began with the 1968 film that kick started the original Fox film series and has helped tto keep these intelligent primates in the public conciousness for years. series, I meantion it's deft care to craft a realistic world populated by Apes. Sure, having the Apes rise up within only 1,000 years of humanity's fall was a bit of a fast timeline -- should be hundreds of thousands (if not millions) of years, not just a thousand or so -- but it's forgivable in the grand scheme of the story the film was telling and the greater political points it wanted to make. The goal was to shine a light on the problems with society and the fact that, whether by nuclear weapons (the bugaboo of the age) or some other means, humanity was probably going to kill itself off. Powerful stuff for the era also continues to evoke strong feelings today. 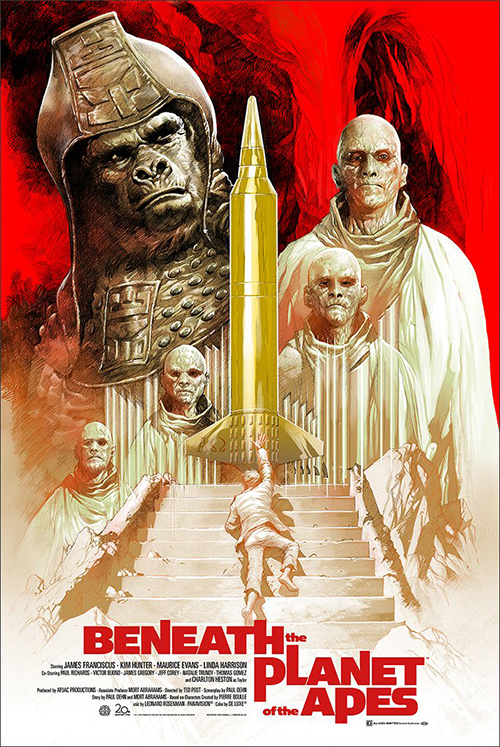 The sequel, Beneath the Planet of the Apes throws all that out. Instead of continuing the explore the powerful themes of the first film, using the Apes as stand-ins for our own broken society and saying, "hey, we suck. Now fix it!" the sequel adds in a new villain, and goes all in on the cheese and darkness. Worse, in the process the film fails to say anything important at all. It comes across as a cheap cash-in of a product that fails to grasp what made the original work so well.

Opening shortly after the first film (after a recap of the ending of the previous movie, forgivable since this came out in an era when the original probably wasn't playing regularly on TVs and certainly wasn't available on home video), we find Taylor and Nova venturing into the Forbidden Zone to see what lays beyond. They're suddenly greeted by a wall of fire and spontaneously opening canyons. Taylor surmisses it's all a ruse and dives in head first, leaving Nova behind to wait, with the instructions that if she gets worried, to head back to Zira in Ape City. Meanwhile, a new astronaut, Brent (Jame Franciscus) arrives on the scene having followed Taylor's ship's trajectory through space. It's a rescue mission, of a sort, but one that goes horribly off the rails as soon as Brent lands.

Naturally, Brent is forced on the run as soon as the Apes see him, pairing up with Nova once he meets her (and sees she's wearing Taylor's dog tags). Hounded by the Apes, Brent and Nova find a cave to hide in only to realize the cave is actually the opening into a vast network of old subway tunnels (giving Brent the opportunity to freak out about the fact that he's on Earth). This then leads them to find a new group of survivors on the planet, the remains of civilized humanity. Ove the last thousand-plus years, these humans evolved the ability to communicate with their minds. Dead set on protecting themselves, this batch of super-humans hate all outsiders, Apes and Humans and await the day when they can unleash the power of their god, a planet-killing atom bomb. And that day may come soon since the Apes are on a warpath looking to exterminate all the humans. When the two sides clash there may not be any winners.

Quite frankly, Beneath the Planet of the Apes is a mess. It's a film that wants to be a direct sequel to the original but it barely keeps any of the original cast to tell its story. Brent is basically Taylor but played by someone other than Charlton Heston (because Heston didn't want anything to do with a sequel, fighting tooth and nail to avoid it, and finally only showing up in cameos at the beginning and the end before getting his character killed off). This leaves the film in a position of having to introduce a new character to the same character beats, going through all the same basic motions of Taylor, just so we can get to the real meat of the story in the last act. It's pretty tedious, fairly redundant, and stupid all around. 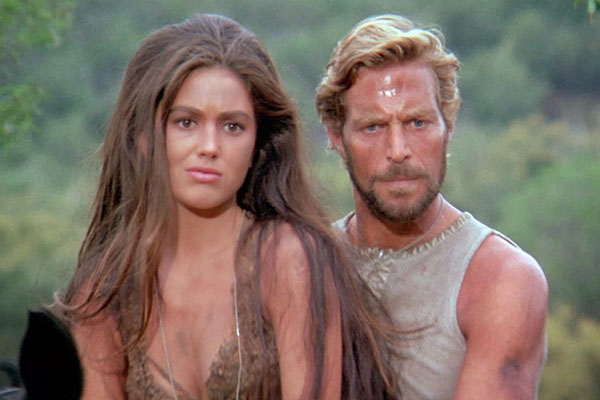 Heston was the star of the original film, to be sure, so I can understand why the studio was adamant about his return. Simple fact is, though, that he's unnecessary to the plot and even locked down for his role, Brent isn't needed to fill the gap. We already have two perfectly good characters available that could aid Nova in her search for Taylor -- Cornelius (now played by David Watson due to a scheduling conflict for McDowall) and Zira (a returning Kim Hunter). The film should have focused on the two Apes we actually liked from the original film. Instead, it shoehorns in a new human for us to focus on, one that had no connection to the original story, and then drops the Apes we like a third of the way into the film never to be seen again in the movie.

The inclusion of Brent raises more issues than it solves. Sure, nopw we have a Taylor stand-in so the audience, presumably, would be happy. The argument would be, of course, that audiences wouldn't care for the film if the Apes were the protagonists (although the next film in the series proves that theory wrong), but he's basically a less interesting hunk of man muscle than Taylor. And to have him show up, another Astronaut from the 1970s, requires reinventing a lot of the details of the first film to make it work. Remember, the Taylor's ship was on a six month expedition into deep space to study time dialation. Those six months reflected 200 years of Earth time, so that by the time Taylor's ship went off the rails and spent another 1000 years out in space, everyone that would have cared about the ship was already long dead.

In that case, why would an expedition be sent in the 1970s to track Taylor down and give him a rescue? For that matter, how would they even know what trajectory Taylor's ship had gone on since, for them, the ship is still quietly floating out in space, peaceful and safe? And to have it happen via an anaomaly in space, instead of the scientifically sound time diallation, ruins all the science that worked in the first film. Now we're introducing time travel and hand-waving magic to the mix just so we can have someone that isn't Taylor play Taylor in a role clearly designed for Taylor. It's stupid.

But then a lot of the previous more was thrown out to justify the plot of this film. At the end of the last film, for example, Zaius threw Cornelius and Zira to the wolves, vowing to have them tried for religious treason and locked up for at least a couple of years. In this film, though, it's all forgiven as if their heresy wasn't that big a deal. Sure, Zira is still in hot water over her regular comments during council meetings, but there's no talk of prison or real punishment. Meanwhile, Zaius, the fire-breathing human hater, is preaching caution and peace. Where did all this come from? He's barely the same character between the two films. 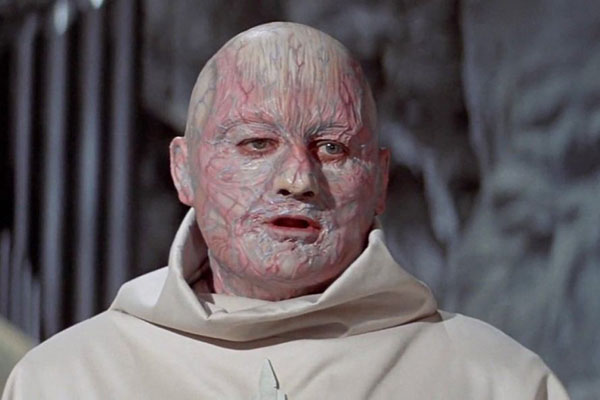 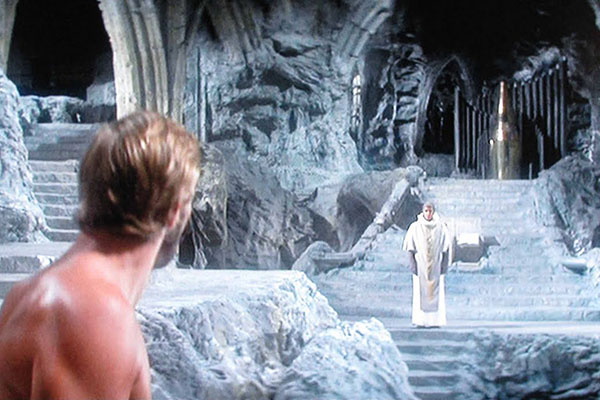 The super-humans, though, are easily the worst. They ring of bad 1970s sci-fi, from their psychic superpowers to their goofy wardrobe. The biggest, weirdest detail is the fact that the super-humans all look normal but that's because they all wear rubber masks; undearneath they're blue and veiny. Who are they wearing the masks for? They aren't ashamed of their looks as they consider it a mark of religious purity (as they worship their atom bomb), and it's not as if the Apes are going to think better of them for looking like normal humans instead of gross, blue humans, since the Apes hate all humans regardless. Plus, the super-humans shun outsiders, so it's not as if they'd wear the masks to make themselves more pallateable to other humans. It's a detail that's thrown in, clearly, for the shock value but it makes no logical sense in the context of the movie.

The movie plods along for most of its run time, throwing in weird details as it focuses on Not-Taylor all to build up to the climax where the Apes attack, kill everyone around them, and then due to their own stupidity, blow themselves off. As the closing voice over tells us, the Earth is a dead rock. They blew it all up, wiping away everything we watched for the last two movies. It's bleak and mean and makes it so that nothing we've experienced has any consequence whatsoever, so what was the point? Are we just destined to destroy ourselves no matter what? Even if nuclear armageddon isn't our big fear anymore?

In the end, Beneath the Planet of the Apes is a complete waste of time. It doesn't have anything to say, it barely holds together, and then it just ends in the least satisfying way it possibly could. The fact that there's another sequel after this is shocking. And yet, it's good for basically removing itself from the context of this film and, essentially, starting the series anew. This film, though, just sucks. There's a reason I've only bothered watching this film twice when I've seen everything else in the series countless times (and once was so I could write this review).