Escape from the Planet of the Apes

Considering the ending of the last film, Beneath the Planet of the Apes, many fans of the series might have wondered just how the films could continue. The second film in the series ended everything definitively, with the largest nuclear bomb ever set off and the entire planet rendered into a blasted out, wasted husk. How to do you come back from that? 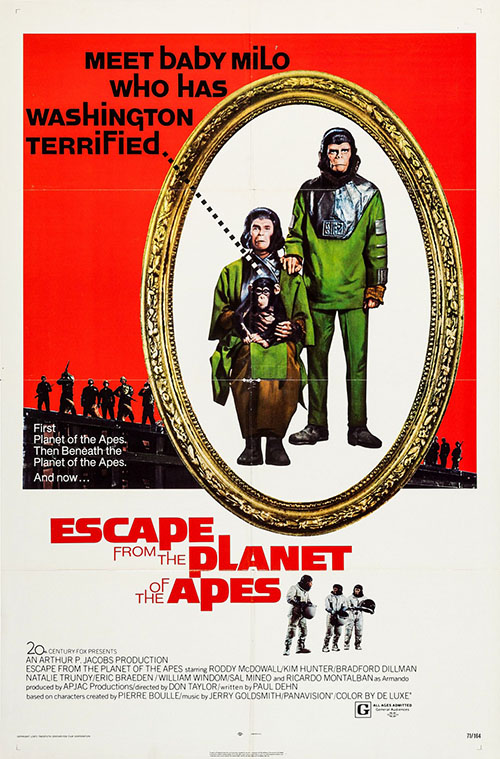 Considering the film series had already explored a couple of different avenues for time travel, the obvious solution was more time travel. Since Brent managed to track down Taylor via a wormhole through time, any characters continuing on in the series simply had to travel back through that wormhole. Seems easy enough except for the fact that the Apes don't have the technology for space flight, let alone regular flight. Still, one of the chimps, Dr. Milo (Sal Mineo), somehow managed to dredge Taylors capsule out of the lake is sank into and, thanks to his own genius, was able to repair and rebuild it. Then, taking Zira (Kim Hunter) and Cornelius (Roddy McDowall) into the ship with him, the three blast off into space just in time to avoid the destruction of Earth. How lucky, indeed.

Of course, then their ship is sucked into the wormhole and, as we see at the opening of the film, the ship crashes into the ocean back in 1974. There, the apes are greeted with suspicion -- they stay quiet, wanting to see what the humans do, so the humans treat them like apes shot into space by a foreign country. Of course, before too long they end up revealing that they can think, and speak, and are truly sentient creatures, and the Apes quickly become the toast of the town. But there's a growing concern about the Apes among the U.S. Government, with one man, Dr. Otto Hasslein (Eric Braeden), leading the charge to discredit the Apes and find out what really happened to Taylor, the world, and the rest of humanity. And the Apes could end up in real danger if the full truth were ever revealed.

Considering how dark both the first and the second films in the series were (and how bad the second one was), Escape from the Planet of the Apes is like a breath of fresh air. It's lighter, it's zippier, and it does the right thing focusing on characters we liked and appreciated. Cornelius and Zira had already been revealed as kind and caring individuals in the previous films so making them the focus of future adventures (since Taylor, Brent, and Nova all died at the end of the last film) just made sense. It felt right, especially since McDowall and Hunter are aweesome in the roles and any excuse to hang out with these characters was appreciated.

For most of the runtime the film breezes along, finding a way to parallel the original movie -- people from space arriving in the wrong time, having to learn about the society they're on while feeling like fish way out of water -- but make it fun at the same time. It helps that the humans don't automatically fear the very existence of the Apes, not the way the Apes feared Taylor in the first movie, allowing the film to maintain a lighter tone. Instead of the Apes initially being persecuted for their existence, they prove themselves sentient and interesting and the world suddenly elevates them as treasures, heroes to be honored. It's a nice way to change the tone of the series and show that not every moment of the Apes films have to be grim-dark. 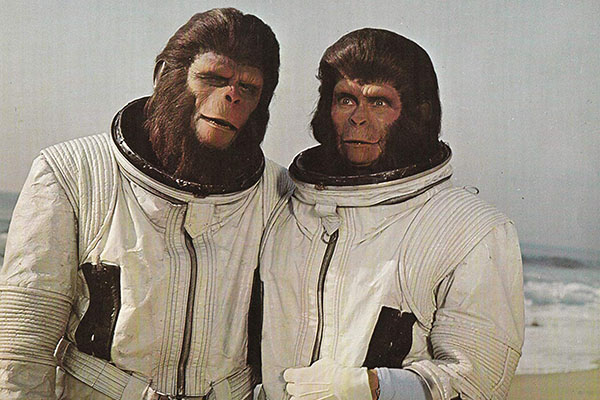 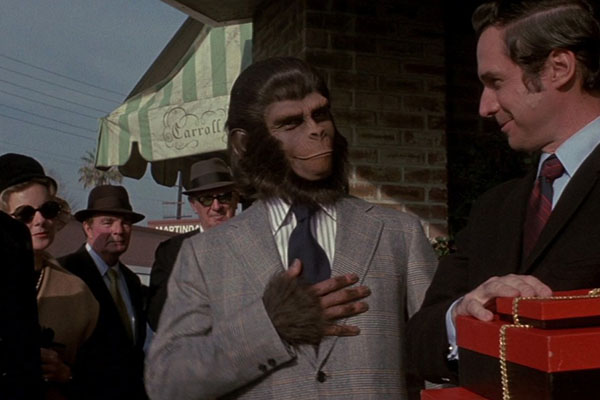 That said, this is still an <Apes movie so, eventually, fear and persecution have to arise. Once the truth about the roles humanity played in the future of Earth, people like Otto started questioning whether the Apes should be held accountable. Zira is revealed to be with child and the possibility that her child could mate with a 1970s "primative" ape and produce a sentient ape, one that could lead to an entire uprising of smart Apes, was too much for the U.S. Government to stand. And that's where the film settles into story beats more familiar to the Apes series: fear, persecution, and eventual death.

It's fair to say that Escape takes a rather sudden and dark turn at a certain point, although it does feel earned at least. Otto was clearly setup as the doubter, the antagonist of the Apes, and once he learns how the Apes treat humanity in the future, let alone what Zira used to do in the name of science (scientific dissection of dumb humans, of course), he turns those in power agaisnt the Apes. He's basically the Dr. Zaius of this movie, the protector of civilizations future, and whether the people in front of him are good or evil, he has to ensure the stability of his world no matter the consequences. So even though he agrees that Cornelius is a purely intellectual being and never harmed anyone in his days, and Zira seems lovely (even if she did do some horrible things in the name of science), his decision is to kill all the Apes and save the world. Whatever it takes, basically.

While the setup of the story, and the eventual downturn for the Apes, is all well established what doesn't work is the (lack of) any moral themes to carry the film. THe first movie worked so well because it shined a mirror back at humanity, but in this movie it's hard to say anyone is really a villain, that anything in the movie is something we should really learn from. Otto's motives are well explained and while he's the bad guy (and gets his comeuppance, of course), he's not really a bad guy. His intentions are clear and just, in a way, eeven if it means he wants to kill to character we have grown to love. And beyond that, it's hard to say what the message of the movie is. "If super-apes comes from space, let them live?" Not sure how that really is a lesson we can use in a practical manner.

I think part of the issue is that it's much easier to show bad behavior in humanity, to shine that mirror back at us, when we have characters that are seemingly so alien doing bad things. When Apes talk about religion and how they were made in the image of God, how it's their divine right to do what they do, we can watch it and say "that's wrong" while also realizing, deep down, maybe the movie is saying we're wrong. But when a human says the same things, there's no sugar coating, no deep down introspection. We rebel against it and say, "humans wouldn't do that!" and shut off to the lesson the movie is trying to teach us. So instead of teaching us a lesson at all, the movie goes out of it's way to try and make all the action justified, all the humans into decent people just trying their best. The Apes in the first movie are monsters, but put into the same position, humanity is good. It actively ruins the moral of the first film without saying anything worthy to replace it. 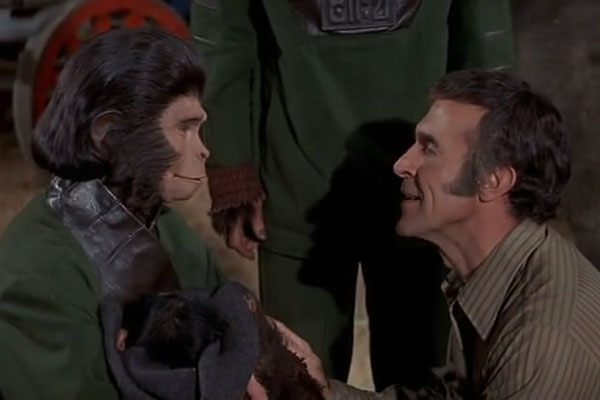 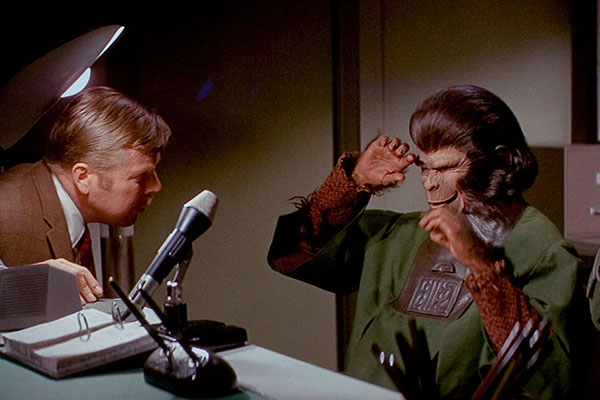 I don't necesarily want or need morality plays in my Sci-Fi, but the whole reason Planet of the Apes worked, and is held up as a classic of Sci-Fi, is because it had something to say and it said it well. It took a hard look at humanity and found us wanting. But with this movie flipping the table it looses the gut punch of the original and softens everything until it's just a fun little frolick with a sad ending. I'm sure more than a few fans had to feel betrayed by the way this film played out.

And yet, at the same time I find myself enjoying this movie so much more than many of the others in the series. The first film is very good but also a hard, bleak watch (something is shared with the fourth movie) while the second movie is just awful. Escape from the Plaent of the Apes, thought, is fun and fizzy for much of its run, and then it takes an expected turn that makes you sad, maybe makes you think just a little, and leaves you hoping for a brighter future that might never come. Maybe it's not the best film in the series, but it's my favorite of the classic films simply because it had fun before it takes the turn every Apes movie has to. Maybe it doesn't have a moral, and maybe its story muddies the message of the first film, but I'm okay with that when we get to see Cornelius and Zira have fun for one last time.