A King Among Apes

Battle for the Planet of the Apes

Hollywood used to view sequels very differently than they do now. In our current era of massive, big-budget blockbusters, a movie that ddoes well is automatically greenlit for a sequel (and a probably sequel), with each new edition of thee franchise getting bigger and bigger budgets. Back when the Planet of the ApesAlthough originally started with the 1963 novel, La Planete des singes, it's fair to say that the Apes franchise truly began with the 1968 film that kick started the original Fox film series and has helped tto keep these intelligent primates in the public conciousness for years. films came out, though, Hollywood wisdom was that sequels never made as much money as the original, so the math was to cut the budget for each successive sequel so that the films remained solvent. That's part of the reason why the original Planet of the Apes film had award-winning makeup effects and wide-open vistas for sets while the last two films in the series looked like they used off-the-shelf gorilla masks while the films were shot on a studio outlot or in some rich guy's back yard. As the budgets shrank, the quality of materials the production staff had to work with got worse and worse. 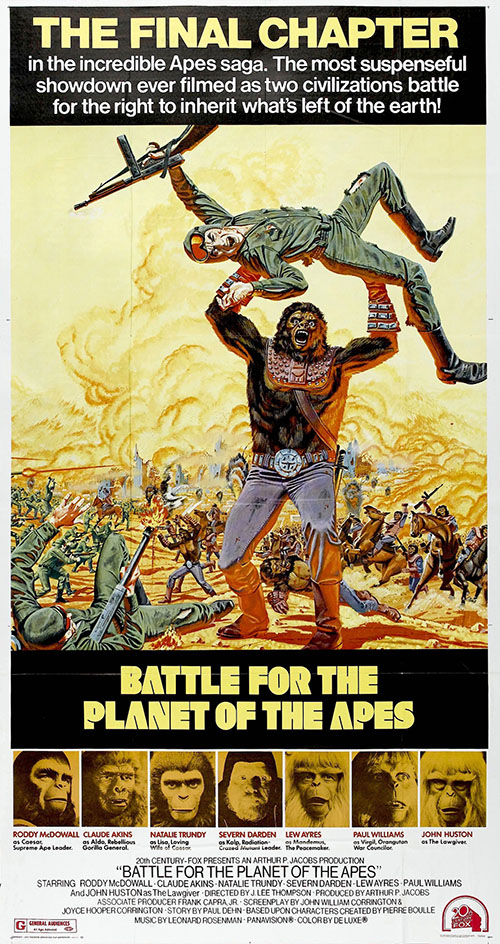 That's part of the reason why, for all the grand storytelling Conquest of the Planet of the Apes tried for, the movie looks very cheap and 1970s, while the big battle at thee end is oddly free of huge armies. Sadly, the final film in the original 1968 series fares even worse, promising up a Battle for the Planet of the Apes while the actual film only shows us one mildy protracted skirmish, with a lot of filler to get there. No one really talks about Battle because it's not anywhere near as good as the previous movies it was birthed from, but not nearly as terrible as Beneath the Planet of the Apes (or the Tim Burton movie to follow). It just kind of exists, a movie that ends a big franchise, but does so with barely a whimper.

It's been nearly two decades since the Apes took over portions of the world from the humans. In retaliation the humans launched their nuclear bombs on themselves, blasting out most of their cities. The Apes survived, though, fleeing the cities before the bombs fell and setting up their own Ape City out in the countryside. What humans that followed were second-class citizens in Ape City, not as abused as the Apes once were under human leadership, but not as respected, or a equal, as thee Apes. Some of the Apes, the gorillas lead by General Aldo (Claude Akins), don't even like this way of doing things. In their opinion humans should be exterminated (kind of like how they were treated in the original movie). Caesar, though, still thinks there's hope for finding a waay for humans and Apes to live together in peace, one day.

That hope is tested, though, when Caesar, along with allies orangatang Virgil (Paul Williams) and human MacDonald (Austin Stoker), head to the abandoned, blasted out human city to try and find old tapes of Cornelius and Zira, the recordings from the Presidential inquiry into the Apes when the first came from outer space. Caesar wants the knowledge of what could happen to the Earth if Apes and humans don't mend their ways. However, going into the old city raises the suspicions of the mutated humans living there, leading them to pursue the three back to Ape City. Soon, forces are mustered on both sides and the humans attack, looking to wipe the Apes off the planet. It's an all-out battle for the Planet... of the Apes!

I get what the story was going for. It wanted to show, in a way, that the Apes and humans were stuck in a closed-loop, ever repeating the same history over and over, each time ending with the Earth getting blasted by the underground mutants (2000 years from now) by their massive Alpha-Omega bomb (as seen in the second film). As wee saw one movie prior, whilee Caesar caused the Apes to rise up he wasn't the one to cause the Apes to advance -- maybe he pushed it ahead by a few years, but the Apes were close to it on their own regardless. That means Caesar isn't there to cause the same loop over and over again, so maybe he can be the one to end it and give the Apes and humans a more hopeful future. 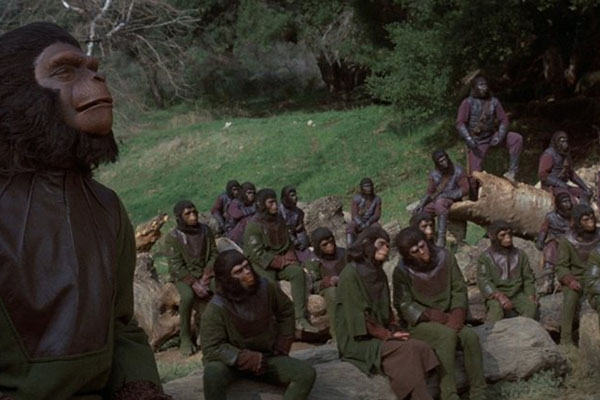 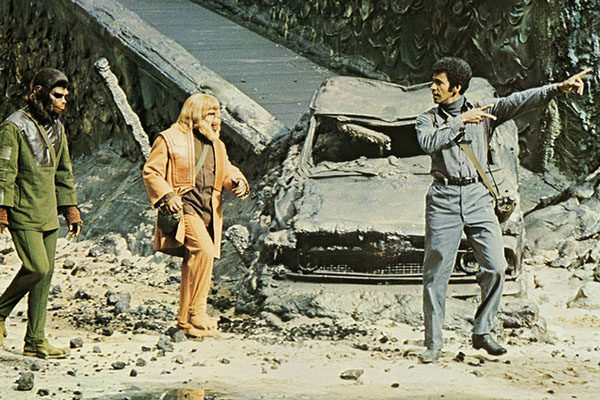 That's part of what I like about this movie: the hope. While it's not nearly as political as some of the other entries in the series, the movie makes up for that by having hope for humans and Apes. Caesar preaches peace, he wants to avoid the Earth becoming a blasted out wasteland 2000 years later, and he knows the only way to ensure that is to start the healing process now. Without Caesar, dropped into this era via time travel, Aldo (or someone like him) would have been in charge and Apee City would quickly resemble to the future we saw in the original film. What the movie is saying is that it doesn't have to be a closed loop, the Apes and humans don't have to war, and all it takes is people coming together.

Okay, so maybe it's a little political. If you take the right reading of the film -- one group that professes itseelf to be superior to another, treating them like servants, before realizing they need to come together and treat each other better -- it's a pretty hopeful stance on Civil Rights. That part of the movie does feel like an extension of Conquest, a desire to continue the story and message from before and drive the point home. That said, the messages of peace, love, and understanding are only one part of the movie, and the rest of it is pretty much garbage.

The movie clearly wants to setup the idea that the humans living underground will eventually become the mutant humans we see in Beneath the Planet of the Apes. There are a couple of problems with this, the first of which is the fact that the mutant humans from that films weren't all that interesting. If anything, they're the one section of charcters the films could have done without. By introducing time travel, the films had the potential to reboot them right out of continuity; new timeline, no need for mutants. If they'd only had the foreesight to do that here as the mutant humans here are just as boring as the one before, except now they have just a sliver of the budget and no super-powers. I'm not sure why these guys had to be the villains of the piece when they are so lackluster.

It's especially egregious when we had a perfectly solid villain right in Ape City. Aldo is setup as a contrast to Caesar, a gruff and angry gorilla that want to rule Ape City and kill all the humans. Right there we have someone to contrast against our hero while also giving us a perspective into the minds of the other Apes living in Ape City. But because so much time is devoted to the boring mutants, Aldo never gets the development he needs. Instead of being the heavy, a gorilla worthy to take on our chip leader, Caesar, he comes across as a petulant child that's told "no" once and decides to overthrow civilization out of spite. He needs more time to develop as a character so we can understand him. Then, when he betrays Caesar and usurps the throne, it has emotional hefty for us. Instead, we don't care about Aldo any more than we do the mutants, leaving us without a solid villain to care about. 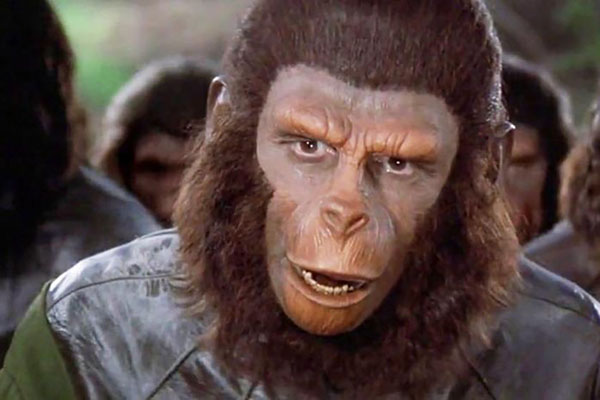 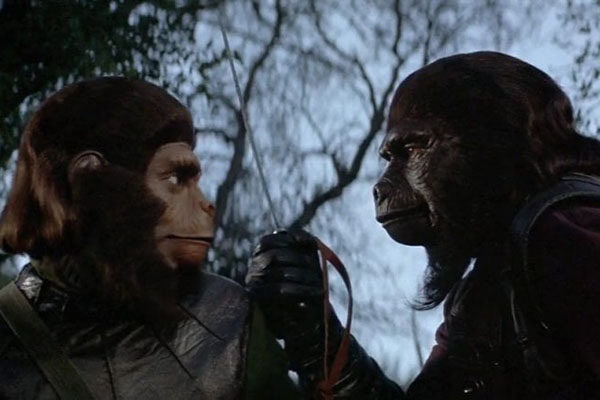 By splitting time between the mutants and the gorillas, the film basically gives us a retread of the second film, just without the budget or style of Beneath. Now, it's not as boring as that film, largely because it keeps Caesar in a lead role (instead of having a new ape arrive from space to act exactly like Caesar after spending half the film to establish this new character first), but it certainly doesn't break any new ground. We alreayd knew the humans hated the Apes, we already knew they wanted to kill all the Apes on the planet, and we already knew they'd go to any length to do it. Meanwhile, we already knew the gorillas are prideful and stupid and would cut off their own nose to spite their face. Nothing in this movie illuminates any new details about these groups. While I appreciate the nod towards peace the film makes, it does a poor job of getting us there. Caesar should be able to point to one villain, we should get why that villain is bad, and he should be able to prove why peace and understanding is better than war.

Instead, the film has the mutants battle the apes, the mutants all die, and then Caesar has to put Aldo on trial and Aldo dies. Not a whole lot of peace there, guys. It kind of undercuts the movie, just a tad.

Really, Battle for the Planet of the Apes is but a footnote in the saga of the series. I appreciate the attempt it made to try and show the Apes (and humans) heading down a new path for the future, but in the end it doesn't have the story to get us there. It's a valiant effort, especially when you consider how small the budget was by this point, but the film fails to deliver.

When it was aired on TV, Battle for the Planet of the Apes was recut with a bunch of unused footage to pad it out to fit television timeslots. This alternate, extended cut of the movie lived on in bootlegs before being officialized in more recent home video releases. While I prefer the extended cut of Conquest, as it improves the tone of the film and eliminates the awful edits to the ending, I'm not as big a fan of the changes to Battle. Specifically, the end section of the film shows some of the left over mutants, after the battle and the rest reteat home, finding the Alpha-Omega bomb. This implies the loop is still closed and nothing Caesar does will matter at all. That's a terrible ending for the movie, undercutting the message of the film, but it also means that this whole film was pointless. If the loop isn't destroyed, what was the point of anything we just saw? For that reason alone, I prefer to stick to the theatrical cut of this film.