With the end of the classic Planet of the ApesAlthough originally started with the 1963 novel, La Planete des singes, it's fair to say that the Apes franchise truly began with the 1968 film that kick started the original Fox film series and has helped tto keep these intelligent primates in the public conciousness for years. saga, a couple of attempts were made, in quick succession, to revive the simian saga on the small screen. As we'll see, this was a bad idea as neither of these shows are at all good. But before we get into the specific shows I want to address the idea of trying to recreate the Apes on the small screen. Considering how bad these movies got once their budget was slashed all to heck, trying to strip it down even further to tell stories week-after-week seems like a terrible idea. Sure, the Apes movies thrived on serialized storytelling, but they also needed a budget to represent the scope of the ideas being tackled. Even reusing props from other shows as well as the original movies, there was only so much the show could do to show us an Ape-future that didn't look chintzy and bad. 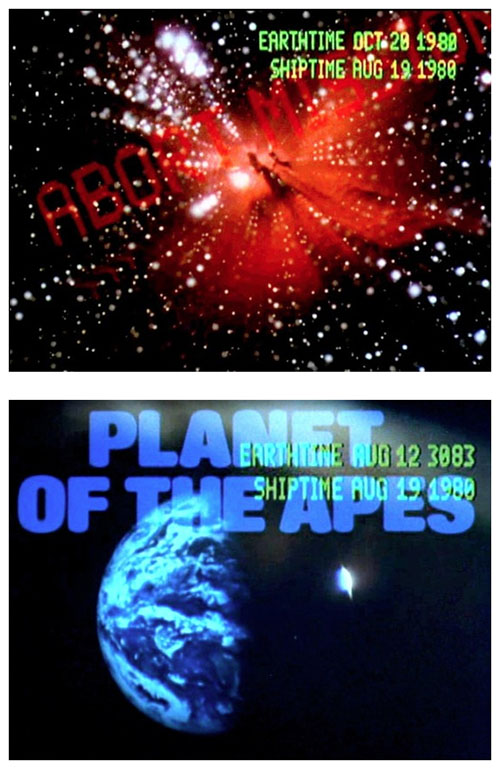 But never tell a studio they can't do something. If they have a property to exploit they will exploit it at all costs. So let's take a return trip (twice over) to the Planet of the Apes to see just how the shows really fared.

Of the two shows, this 1974 continuation is certainly the more faithful, and not just because they lured in the actor most connected to the classic series, Roddy McDowall, to play a new character in the TV show. This, along with using similar costumes and makeup effects, makes this show feel about as connected to the original movies as you can. Whatever issues I had with the show, it didn't lack for trying to feel in-continuity with the classic films.

In that same regard, I also appreciate that the show tried to act like a continuation of the story of the movies. When we pick up with the show, two astronauts have just crash landed in the future of Earth (as they'll soon learn). And, of course, it's a future dominated by intelligent Apes, although humans this time around can talk and seem to be treated as something more than just wild animals (although not much better than, to be sure). Although the series doesn't come right out and make the connection, this show seems to be set at a time after Battle for the Planet of the Apes where the humans haven't yet lost their ability to speak but the relations between Apes and humans have not improved the way Caesar would have liked. It's an interesting period to explore and, if intentional, I appreciate that the show was willing to explore and broaden the scope of the movies in this way.

Of course, that could just as easily be me reading into the series and trying to find connections for a show that just happened to borrow ideas, costumes, and makeup from the movie series. Certainly these interesting ideas weren't enough to get me to watch through the series (which I bought on DVD) because, honestly, the show is pretty boring. It has a very low-rent Kung Fu feel where, each week, the heroes would find a new place to explore, and new adventure to get sucked into, and by the end of it some resolution or another would be found before our crew wandered off again. It's not that interesting a formula, and there were a lot of shows in this era doing the same kind of storytelling. Just adding Apes into the mix wasn't really enough. 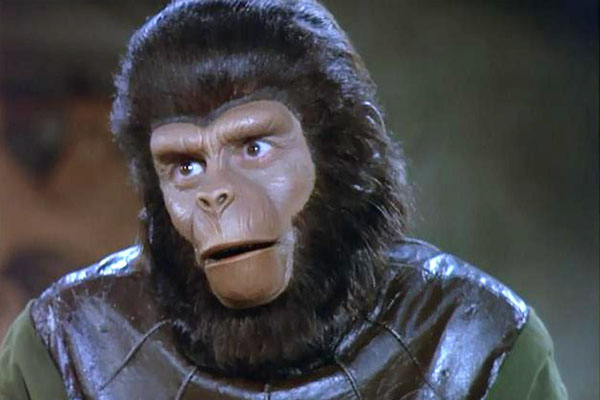 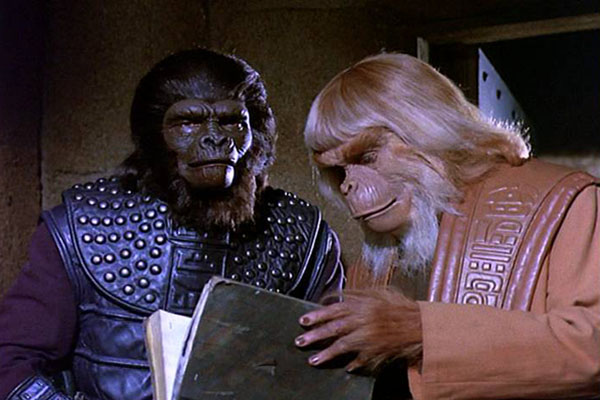 But then, on a budget I'm not really certain what more the show could do. Clearly they couldn't build a huge number of sets each week to show all the various Ape cities so, most of the time, it's the heroes out in the wilderness, trying to avoid Ape civilization while getting themselves out of one scrape or another. This might even have worked, for at least a little while, if the pacing of the show were better. Most episodes felt like 30 minutes of story stretched to 45 minutes of TV. Of course this show was filmed during the 1970s and there's a lot of media from that era that just feels so slow now; something about the directorial conventions of the decade, I suppose.

Of course, I couldn't have been the only one to feel like this show was horribly slow -- it was canceled after only a single, 13-episode season, with the major "will they ever escape this Planet of the Apes" plot line unresolved. I do feel bad for any fans that stuck around through all 13 episodes as that had to feel like quite a blow. I'm not one of them, though, as I barely made it halfway into the series before I had to stop. This just wasn't for me.

Return to the Planet of the Apes

Still, I fared better with the 1974 series than I did its immediate follow up, the cartoon reboot Return to the Planet of the Apes. This one is just absolutely dreadful, a series my wife and I will mention from time to time as a kind of a dare. "If you're that bored, want to watch another episode of the Apes cartoon?" To note, our filmic dare used to be Human Centipede, but at this point I think I'd rather watch that film that any more episodes of the 1975 Apes cartoon.

I groused above about how slow the '74 show is, but it's positively action-paced in comparison to this Saturday Morning Cartoon. In the first episode our plucky team of astronauts land out in the middle of a desert and, over the course of 22 interminable minutes, end up, slightly further into the desert. I've never seen so much walking on TV in my life. It's puts The Lord of the Rings to shame for the amount of walking it subjected us to. It's just that slow. Nothing really happens in that time, either -- they don't really encounter any dangers, and they aren't spotted by the Apes (who are on the other side of the desert). It's just humans walking along, and some Apes being Apes and getting up in arms because something fell from the sky. Thrilling TV here, people. 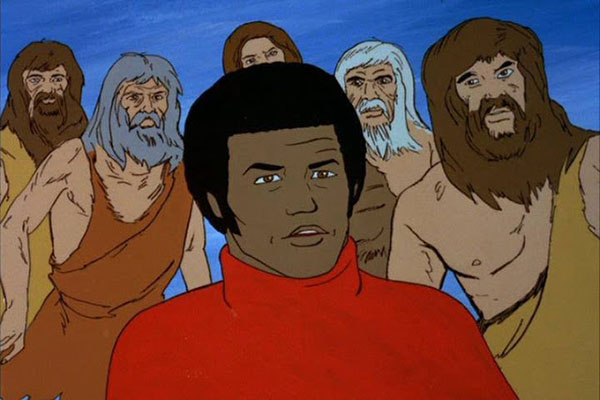 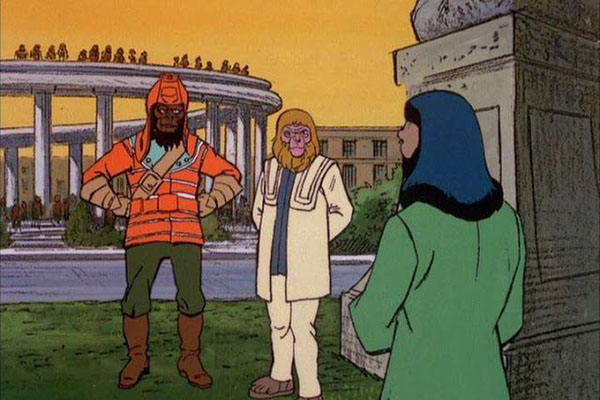 Now, it's entirely possible that the show does pick up after this first episode. I don't know because I've never been able to bring myself to try again. That first episode was a lesson in tedium, one I don't want to experience a second time. It's about as boring as the Tim Burton reboot of the Apes series, and I can't even stay awake through that movie at this point. However good the show might get after this first episode (and there are plenty of write-ups about all 13 episodes of this show), the terrible pilot put me off ever wanting to watch the show again.

And I couldn't have been the only one as, like the 1974 show, this series was canceled after only 13 episodes. We were saved from two terrible shows in short order, but sadly thee Scissor-handed Director himself, Tim Burton, would show us how much worse this series could get in 2001...