A Fresh Start, the Right Way

Rise of the Planet of the Apes

The prospect of relaunching the Planet of the ApesAlthough originally started with the 1963 novel, La Planete des singes, it's fair to say that the Apes franchise truly began with the 1968 film that kick started the original Fox film series and has helped tto keep these intelligent primates in the public conciousness for years. series had to seem pretty daunting back in 2011. As we saw, previous attempts at bringing the Apes back, from two failed television shows to Tim Burton's abomination (that, to this day, I still haven't forgiven him for), getting the right mix of material to make a good Apes production was harder than it seemed. Even the classic movies series had a hard time maintaining quality over its five movie run. These movies need the right mix of magic and most production teams just weren't up to the task. 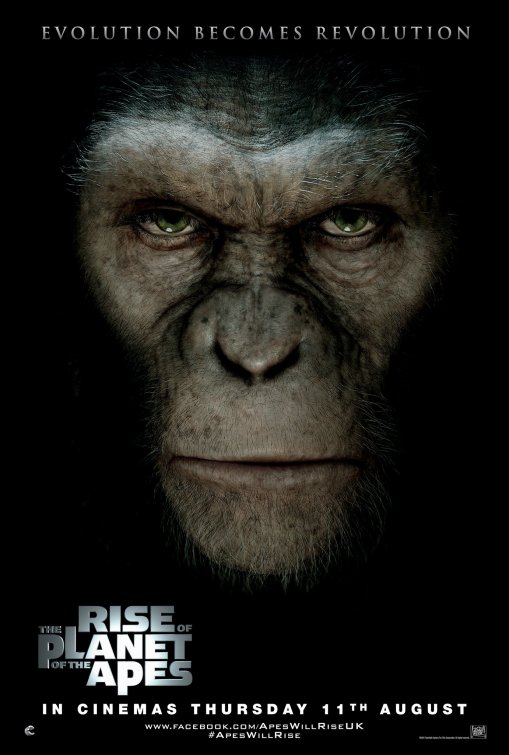 For the most part the 2011 film, Rise of the Planet of the Apes, managed to get that mix right. Of course, to do it the film basically had to throw out all the classic conventions of the series to craft something practically brand new. It must have been a jarring transition for fans of the classic series as just about everything they'd expect in their Apes films, from the goofy but endearing makeup to the time travel shenanigans, was removed to tell a much more straight forward story about normal apes made extraordinary through magical science. And yet, I think it's because the production team was willing to ditch so much of what came before, to try and find a fresh take with a fresh style for Rise that it honestly might be the best film in the entire franchise.

Set in the modern era, Rise of the Planet of the Apes opens with chimps being rounded up from the jungle home and experimented on by Dr. Will Rodman (James Franco). Will has the best of intentions as he's using the chimps to test an experimental drug/gene therapy/viral delivery system that could cure Alzheimer's. Weill has a personal stake in this, too, as his father, Charles (John Lithgow) has the brain disease and is steadily deteriorating from it. And the drug works: after five years of testing (that we didn't see before now), the current treatment, ALZ-112, not only cures cognitive decline (as we see when Will illegally tests it on his father), but it also greatly improves intelligence in anyone, ape or human, it's tested on. And it passes down the genetic line, as we see when one chimp, Bright Eyes, gives birth to a baby who also has the ALZ-112 in his system.

Sadly, Bright Eyes is put down for aggression (because she was protecting her newly born child), and Will ends up taking her baby, now named Caesar (played in motion capture by Andy Serkis), home. He gets attached to the babe, realizes how smart it is, and begins studying Caesar while basically raising him as his son. Years later, the drug treatment sadly stops working -- the body eventually develops antibodies to fight the viral component of the treatment, and Charles ends up deteriorating rapidly. In defending Charles after the old man crashes a car, Caesar gets very aggressive and ends up put in a ape control facility. Caesar, seeing the treatment of the the apes in this home, realizes he needs to take a stand, so he breaks free, grabs what he can of the ALZ-112, and creates his own group of super-apes. Meanwhile, the revised version of the treatment, ALZ-113, has a virus that is too aggressive and ends up killing people. Suddenly there's a deadly plague on the loose and a bunch of monkeys that might be carrying it. All of this could lead, of course, to the Rise of the Planet of the Apes!

From the start, Rise feels like a very different kind of Apes movie from what came before. The first thing the production team ditched was the makeup effects of the previous endeavors, instead going with mo-capped CGI created by WETA (the Lord of the Rings SFX powerhouse studio). Instead of human-looking apes (obviously played by humans) we gets natural-looking apes, ones that could exist in this world right now. You end up thinking about all the ape characters in different terms when they're played as actual animals, viewing their growth, they evolution, in completely different terms. These aren't just creatures one step from becoming human-like, beings that exist in some nebulous potential future (of 1991), but animals experimented on by humans. 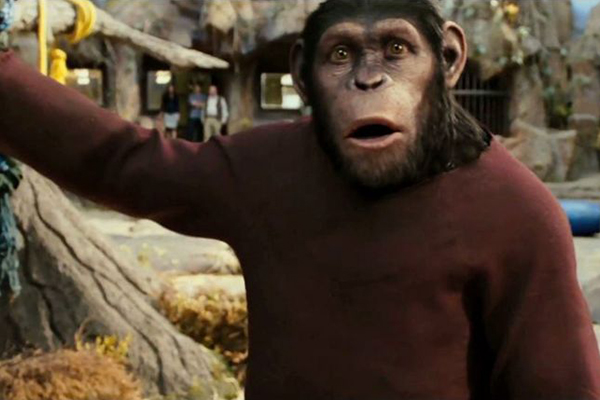 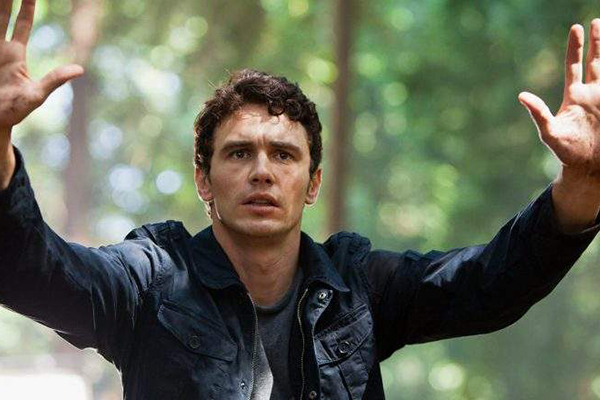 Because these characters aren't human I think you end up having more sympathy for them than any of the apes that came before (except for maybe Cornelius and Zira in Escape from the Planet of the Apes). This is a story about how they come into being, and it feels vastly more natural, and better earned, than any of the big story moments from the previous films. We get to see it happen, on screen, in a way that feels earned.

Of course, that's the big trick this movie is able to achieve: because of the way the story is constructed, the junk-science timelines and goofy, bad science of the previous films is ditched. Instead of having apes that look human, that couldn't possibly exist in this time (no matter what the movies might have proclaimed) and who clearly evolved much faster than should be humanly (or simianly) possible, we have apes that are apes and so when they change and shift and evolve, it seems more realistic, more like it could actually happen. You don't complain about compressed timelines or things moving much too quickly because the film comes up with an answer to all those story issues that actually works.

Not that I'll try to argue for the science of this film, either. While the viral therapy sounds legit when the scientists talk about it in the movie, it's total junk science, the kind of thing one of the writers probably saw from Wired when it went past on their Facebook feed and they said, "yeah, that makes sense." From people I know who actually know about this field of medicine, the science is total bunk, which is part of the reason you don't hear about actual doctors pursuing viral drug treatment for Alzheimer's. in reality.

And yet this isn't a detail that really bothered me too deeply. It's like when you are watching a space epic, like Star WarsThe modern blockbuster: it's a concept so commonplace now we don't even think about the fact that before the end of the 1970s, this kind of movie -- huge spectacles, big action, massive budgets -- wasn't really made. That all changed, though, with Star Wars, a series of films that were big on spectacle (and even bigger on profits). A hero's journey set against a sci-fi backdrop, nothing like this series had ever really been done before, and then Hollywood was never the same., and the ships are making nose as they fly around and shoot at each other -- that's bad science as nothing makes noise out in space. But while I might note in my head, "that's not really heard," I don't let it ruin the movie for me. Junky science can be fine if the movie around it is good, and damn, Rise of the Planet of the Apes. It's a deep, heart-felt story about a genius ape who decides to break free of his cage and take his brethren with out out into the woods to start and ape culture. 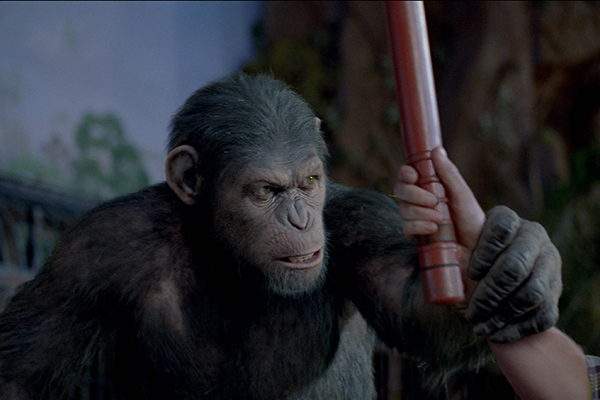 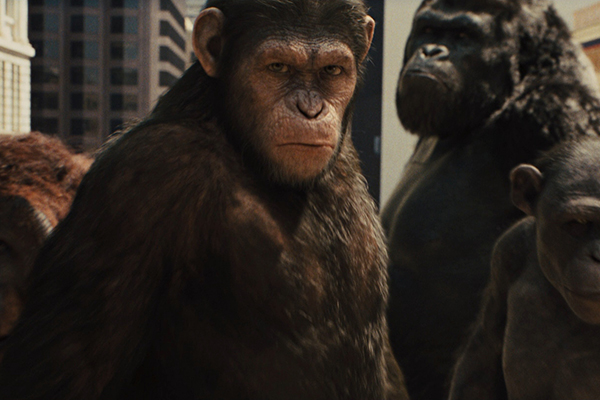 Okay, so yes, it's a bit goofy (just like all the other Apes movies). The reason it works, really, is in the grounded performance on mo-cap specialist Andy Serkis. As we've seen in the past, such as with his performance as Golum in The Lord of the Rings, Serkis is a master of making his mo-capped characters come to life. Here, he imbues Caesar with deep emotions, real feelings, and a true sense of self. It's a masterful performance, one that brings the whole movie together and makes everything work, despite the junky science and the bland performance of James Franco.

Yes, Franco is easily the worst part of the movie. There are some roles Franco is good for -- druggie, drug dealer, bartender, basically anything that requires him to bee shady and stay out until dawn arrives (so a sketchy vampire would be right up his alley). He's not believable, in any way, as either a scientist or a father, so giving him that dual role in Rise of the Planet of the Apes does a detriment to the actor. I get that his star was on the rise when this film came out, but surely someone had to have seen his performance, how bland and boring and lost it seemed and thought, "we gave this movie to the stoner from Banana Express? Really?"

If Franco's Will Rodman were the true focus of the movie then Rise wouldn't work. Thankfully, though, the film very quickly shifts its focus to Caesar, letting Franco play second fiddle to a pixelated monkey. It's smart, because one of the two gives a credible, believable, human performance, and the other is James Franco.

Still, even with Franco in the movie the film is great. The film builds up Caesar, makes you care about him, and gives you reason to cheer when he launches his Great Escape. The whole last act is a satisfying pay off for everything that came before, a truly watchable piece of cinema that never gets old. The film concludes in a crowd-please, satisfying way and the audience if left elated and happy for the apes. 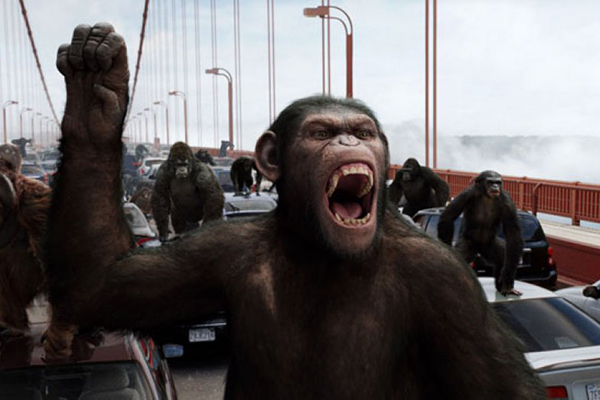 Oh yeah, and then humanity dies from the plague. So, win-win? Hey, wee had to get to a point where apes rules the world one way or another since this film is a Planet of the Apes production.

Rise of the Planet of the Apes is a fantastic movie with a few small flaws. On the whole, though, it does everything right to give the Apes films the restart they richly deserved. And because it ends on (mostly) a high note, the film does something even the best film in the series failed to do: it left its characters in a good place with hope for the future. It only took 33 years for the series to finally pull that off.