A Prelude to War

Dawn of the Planet of the Apes

The first of the 2011 Planet of the ApesAlthough originally started with the 1963 novel, La Planete des singes, it's fair to say that the Apes franchise truly began with the 1968 film that kick started the original Fox film series and has helped tto keep these intelligent primates in the public conciousness for years. films sits in an interesting spot in the continuity. If that first film hadn't been a rousing success at the Box Office, it was positioned as prelude, a prequel to the whole series that came before and could have continued functioning in that capacity forever, a fun footnote to the series. Instead, it became hugely popular which immediately led to discussions about a sequel. The end of the first movie is pretty perfect, a hopeful note for the Apes while, in a tag ending the humans are set up for their fall. How do you continue the story from there? 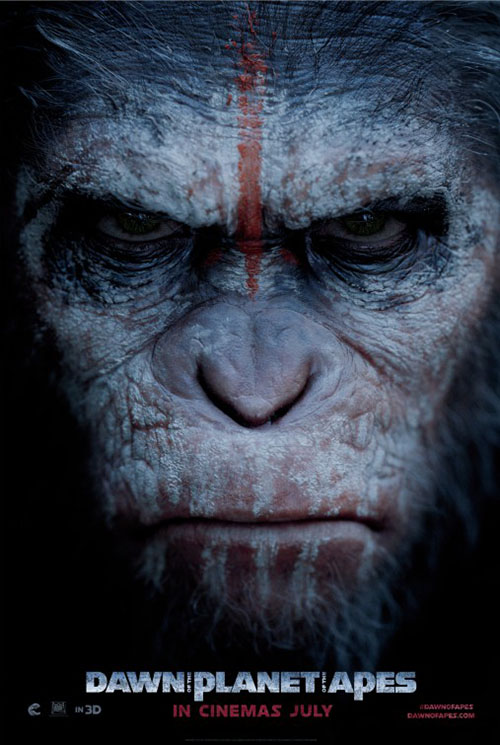 With the sequel, Dawn of the Planet of the Apes, the answer is to move the timeline far enough ahead that the movie can focus on the apes and the new threats against them in a very different world. Instead of just showing the humans coming after the apes during the time of the Simian plague, we cut a decade ahead to when civilization has fallen and we basically already exist in a Planet of the Apes. It's a bold choice, to be sure, but I think considering the stories the movies were trying to tell, it's the right choice (even if it does rob us of a chance to see the fall of humanity up close and personal). Instead of an apocalypse movie we get a movie about a new species building its world in the ashes of the old one.

It's been ten years since the Simian Flu spread around the world, killing most of humanity, all except the "lucky" few who were genetically immune to the disease. For all intents and purposes humanity was wiped off the planet, leaving behind the traces of their civilization, and the pocket of apes that managed to escape into the wild at the end of the last movie. Lead by Caesar (a returning Andy Serkis), the apes have built a village into the wilderness, an ape city of wood and hopes and dreams. Assuming all of humanity has been killed years earlier, the apes have spent the last ten years operating on their own, at peace in their quiet city. But then humans appear on the outskirts of their town, not knowing the apes are there as they go about their own, human business. This, naturally, leads to a confrontation and escalating fears.

One man among the group, Malcolm (Jason Clarke) thinks that the apes can be reasoned with, worked with, to future both groups. The humans need access to a hydro-electric damn so they can power their city and save humanity, but the damn is deep within ape territory. Meanwhile, Koba (played by Toby Kebbell), a lab ape that had been tortured by humans for years, distrusts the humans. Although loyal to Caesar for years, Koba begins to have doubts about Caesar's leadership. Finding that the humans are stockpiling guns, Koba thinks the time is set to wipe out humanity before the humans get the same idea. With a power struggle in place for control of the apes, and the humans themselves on the brink, things are going to quickly build until a war with the humans is the only path left.

What's interesting to me about this movie, more than anything else, is that the humans aren't, in any way, the real focus of the movie. Accepting its role to continue showcasing how humanity could go from masters of the world in Rise of the Planet of the Apes to eventually being brainless animals in a future not unlike the 1968 Planet of the Apes, Dawn uses the humans as a catalyst to further the story of their apes. This is about Caesar, Koba, and the rest of Ape City as they struggle to determine their own fates, their own future, with out without humans at all. While there are human characters in the movie, they aren't as important to the machinations at play as any of the ape characters; they further the plot and then let the apes take over. 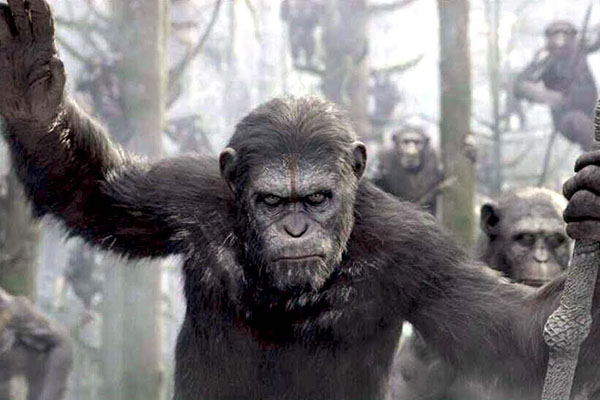 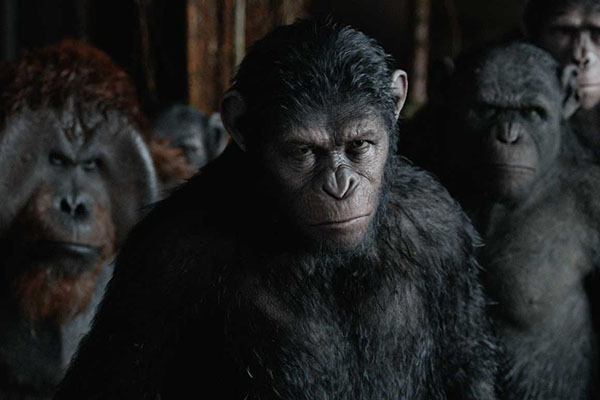 In that regard, there really isn't even a human that can be viewed as a villain in the film. Sure, one idiot, Carver (Kirk Acevedo), hates the apes and keeps causing problems, but he's not really a villain, just a guy that can't keep his mouth shut. Dreyfus (Gary Oldman), leader of the human city, distrusts the apes and ultimately would prefer to wipe them off the planet, but he also recognizes that he has neither the manpower nor the numbers to make that happen. Humans may not be the good guys, but they also aren't really the bad guys of the piece.

The true villain of the film is Koba, and even they it's a nuanced take on the traditional villain role. Filling in for the blood-thirsty, distrustful gorillas in the original series of Apes films, Koba (a chimp, not a gorilla) hates and fears humans and this colors everything he does. He eventually becomes a full on villain, frothing at the mouth and full of hate and anger, but for two full acts of the film we get to see him slowly turn, learn all about his past, his fears. We understand why he hates humanity and, were there a truly evil human to fight, Koba would be right to take the actions he does. That's one of the things the movie gets so right: grounding its villain and giving him color and nuance so, every step of the way, we understand why he's doing what he does. We may not agree with him, but we can at least understand where he's coming from.

And the points Koba raises aren't wrong. Caesar, in agreeing to work with the humans at all, shows more love for humanity than they may deserve. Time and again the humans screw up and yet Caesar is there to help them out again. Of course, Caesar wants to try and preserve the peace, to not lose any ape lives to a war they may not win (and even if they do, at what cost?). His reasoning is to avoid a conflict and help the humans so long as it doesn't come at the detriment of the apes. Our hero has motivations we can understand, as does the villain, leading to a confrontation that may be inevitable but is no less heartbreaking.

What's impressive, really, is how much the movie gets us to care about characters that, realistically, don't exist at all. Every ape in the movie was done via motion-capture performance from human actors, with CGI ape effects layered over top. Caesar and Koba don't come across as CGI effects, though, but as realistic, full-realized, sentient beings, and it's to the credit of Serkis, Kebbell, and the rest of the ape performers. They're able to get such moving, powerful performances acting as apes, conveying real emotion under the layers of CGI effects, a feat in any circumstance but especially so here with so many apes on screen that have to be treated as real people. 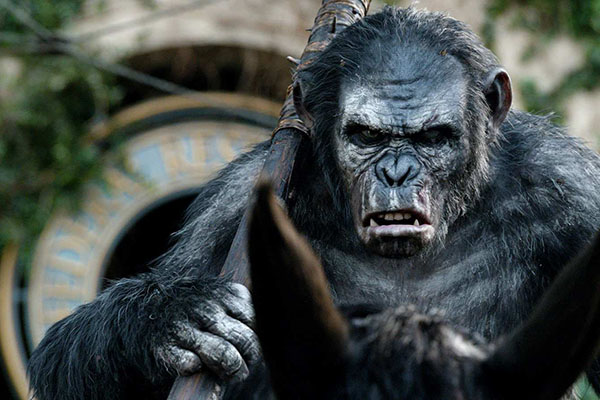 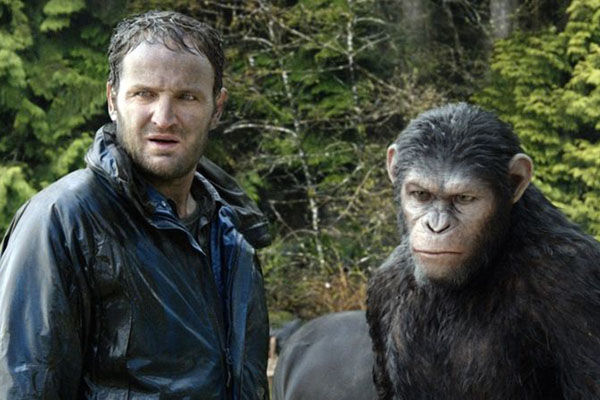 The one real flaw with the movie isn't in the story itself, or in the way it handles its character or actors, but simply from the fact that it's effectively a middle movie in an eventual trilogy of Apes films. As such, while the story of Caesar and Koba is resolved in this movie, the created story about the conflict between apes and humans is left unresolved. The apes know war is coming (and not just because the next film is called War for the Planet of the Apes) and it's only a matter of time before the humans strike out at Ape City. But right as war seems inevitable, that the next way of attack will is on its way, the movie ends with a credit roll. It leaves you hanging, giving only half of the important story, feeling incomplete even after a big climax and huge moments for our characters.

I watched Dawn when it came out in theaters and while I enjoyed it I was also infuriated by the ending. It was building to something powerful, something bigger than the conflict we'd just witnessed, but ending ambiguously as it does, we're left waiting. We don't gt the full release we need to tie the movie together, and that bothered me. Now that all three movies are out and this film gets to rest as a proper middle movie it's not as annoying. I like this movie a lot better now that there's a story after it. Just know going in that this movie doesn't tell as complete of a story as you might hope. It's a good, solid movie and a great extension of the previous film, but Dawn of the Planet of the Apes raises more questions than it answers, leaving fans hanging. Depending on your feelings on the matter, you might not want to come back for the inevitable War.