The Fall of Man! The Rise of Apes!

Conquest of the Planet of the Apes

With the end the last film, Escape from the Planet of the Apes, the films set themselves up for another sequel. This is the first time the movies had really done that as the first film wasn't obviously setup for a sequel (hence why Beneath the Planet of the Apes feels so tacked on and pointless), while the third film basically had to juryrig a way to continue the series out of absolutely nothing. The movies actually being forward thinking about sequels was actually pretty novle, all things considered. 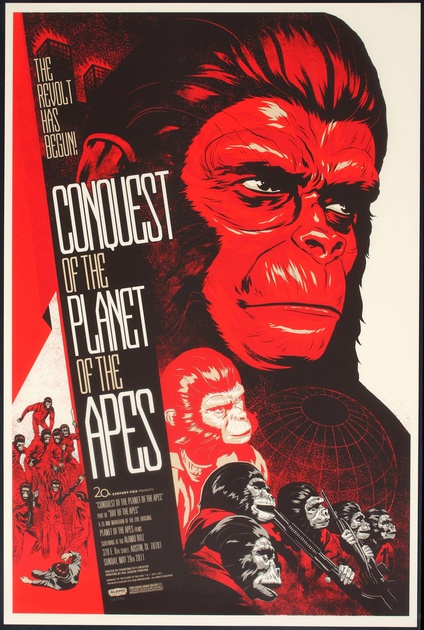 That said, I'm not sure the movie viewers were expecting this fourth time around is the one they actually got. In Escape, Cornelius talks about the past of the Apes, how they rose up after humans adopted primitive apes as pets when a plague wiped out all the cats and dogs. Soon, apes were being treated as servants and slaves until, eventually, they evolved, gained intelligence, and overthrew the humans ruling them. This was all said as something that would happen in the distant future (and it was setup with a lot of retconning of Cornelius's character as, prior to this film, he really didn't know anything about the prehistory of the Apes) so to then have this story told to us in the fourth film, Conquest of the Planet of the Apes, probably seemed kind of weird.

And it is weird. While the message the movie presents is solid, politically charged and fairly dark at the end, the movie is also deeply silly and very goofy. It's like the producers really wanted to have the opening half of the film be filled with light, frivolous antics, but they didn't have the subject matter they could apply it to. Where the third movie managed to remain fairly grounded and realistic (as it was a 1970s-based film produced in the 1970s), Conquest is set in a near future, 1991, that looks like "The Future" as filtered through the lens of the 1970s. Essentially, it's dumb looking and kind of stupid, something you have to forgive and get past living now in the late 2010s.

Of course, everything about this movie suffers from the desire to showcase a future that should have been 100 years or so off, at least, not 20-ish years after the previous film. The movie hinges upon a plague wiping out all the pets of humanity, which could happen I guess. But then the supposition that humans would take apes as pets is a little weird. We have to accept it, though, as that's a plot detail from the previous movie. But the assumption that, with the pets all dying off by 1983, humanity would then not only accept apes as pets but also have the apes grow smart enough to be used as slaves, and that theey then would be able to ogranize and take over the world, all in the span of eight years, well that's just a bit much to accept. The timeline is way too rushed, forcing me to constantly correct it in my head just so I could move past it and try to enjoy the movie for what it was.

With the setup out of the way (and being able to ignore the 1970s-futurism), there's actually a decent little movie to enjoy here. Ceasar (Roddy McDowall), son of Cornelius and Zira, is brought the city by his protector, Armando (Ricardo Montalban), so they can advertise their circus. Of course, in the city, Caesar has to pretend to bee a dumb ape, something he is quite bad at. When he sitnesses another ape being beaten by police, he shouts out in anger. Armando tries to cover for it, but this only sinks both of them deeper into trouble. Caesar goes on the run, hiding with other servant apes while Armando is arrested (and then eventually dies in custody). Seeing what is happening to his ape breathren, Caesar starts training the other apes, having them steal equipment and supplied, getting them organized. It's all setup so that when the time is right, the apes can lead a revolution and, hopefully, lead to the rise of the Planet of the Apes! 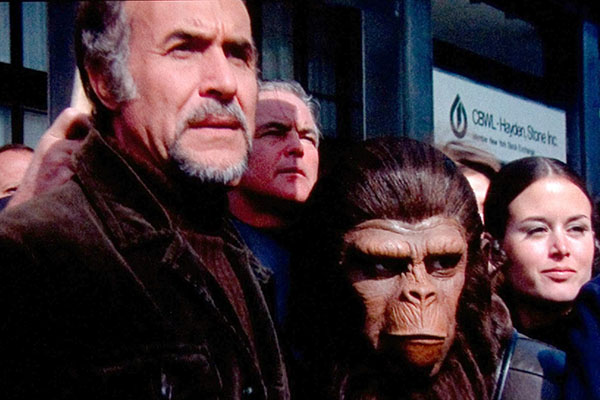 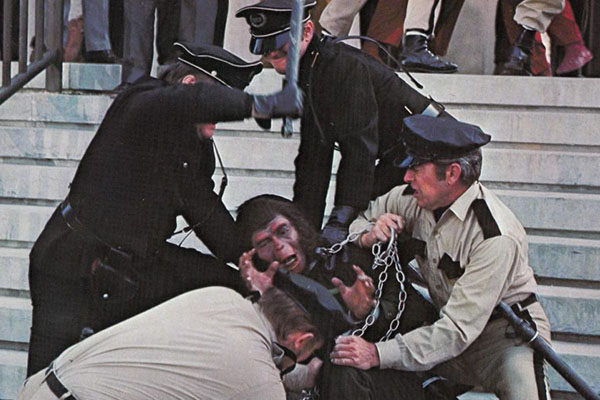 Because of the setup from the last movie, with us getting Cornelius and Zira, the two characters we liked from the previous films, and watching them first be honored and then ostracized from human society, we're already predisposed to think of their child, Caesar, as the protagonist. Watching the inhumanity of the humans, we find ourself automatically siding with the apes so that when they do rise up and try to take over the world, it's the apes, not the humans we're rooting for. We want to see the downfall of our own society because, honestly, the apes are nice and we kind of suck.

Think about the trick the movie plays on us: we side with the apes, the villains of the first film. In the original movies we thought the world was turned upside down, that the apes were somehow a worse option for us and the only reason they took over was because we couldn't get it together ourselves. But not we see that, really, the apes might just be the best ones to inherit the Earth, especially if we're going to keep treating some people like second class citizen, abusing them and using them like slaves.

Considering when this film came out, during the tail end of the Civil Rights era, the lessons the movie has to us are pretty overt. There's no subtlety here, especially not with an African American character, MacDonald (Hari Rhodes) in a lead role. Cornelius even says, "you of all people should understand," to MacDonald, so clearly the movie is drawing a line between how the apes are treated here and Black suffering and White Nationalism in the real world. Of course, there's also the fact that every other human in the movie is white, and all the apes come from Africa. Honestly, if you didn't come away from this movie seeing a parallel between what the apes go through and our own issues with race you had to be willfully ignorant.

I don't think that hurts the film, though. The first movie was overtly political, too, but that's one of the important things about Sci-Fi: it can show us a future just close enough to our own that it can comment upon, and highlight, our own failings. THe first movie touched upon the fears of atomic war while this film (having retconned out the troubles with the bomb) can focus on more pressing socio-economic issues of the day. And, certainly, seeing the apes rise up, showing them gaining the upperhand over their white masters, have a visceral thrill. Whether or not they really could have conquered a city as easily as they do in the film is a question best avoided (again, something the movie hopes you can ignore), but it does at least feel earned within the context of the ape struggle. 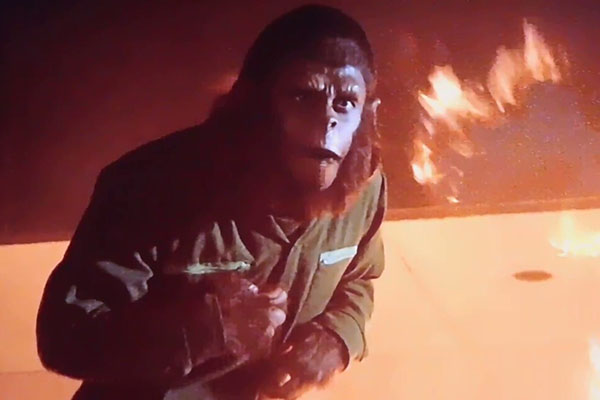 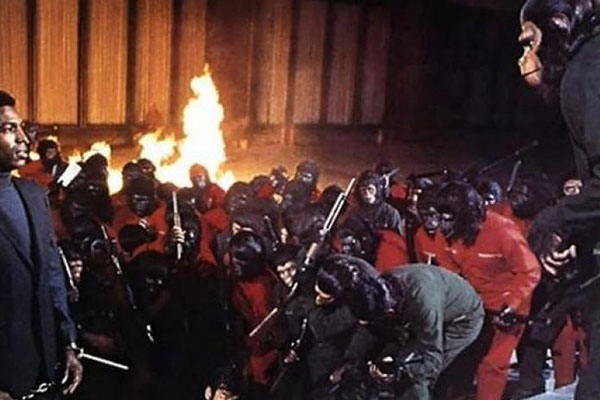 What isn't earned, though, is the end of the Theatrical Cut of the film and, for most viewers, this is where the movie is going to go off the rails. There are two cuts, the original edition and the theatrical cut that the studio released instead, and where the original version ends on a dark note with Ceasar declaring this a Planet of the Apes, that humans will all pay, in the Theatrical Cut ceasar has a change of heart for no reason and decides diplomacy and peace are what's needed. He has bloodlust in his eyes but he's overdubbed to speak of peace. It just doesn't work. When fans talk of this being one of the weaker entries in the franchise, this ending is part of the reason why.

The film is flawed, make no mistake, but for much of its run it at least has its heart in the right place. If you can forgive the 1970s-futurism and thee spotty science, there's a good morality tale within Conquest of the Planet of the Apes. I just suggest watching the uncut edition so you aren't irritated by a serious cop-out ending.