Did You Go to Quantico for This?

It is interesting to go back and look at the various films Jackie ChanConsidered one of the greatest martial arts actors ever, Jackie Chan has a filmography long enough to put the collected works of many other actors to shame, and he did it all while constantly putting his body on the line, film after film. produced at the different points in his career. His early films marked him as a goofball, more prone to comedy than action (with, sadly, many of those jokes aimed at his female co-stars, which I have to assume, without any better evidence, was as much his choice as it was cultural). He also played a lot of police officers (which I've commented on as well), but as his career progressed, he added more depth to his movies, and more drama as well. He still seemed to enjoy working comedy into his movies (it was his signature, along with his high-flying action), but it did seem like he wanted meatier rolls. 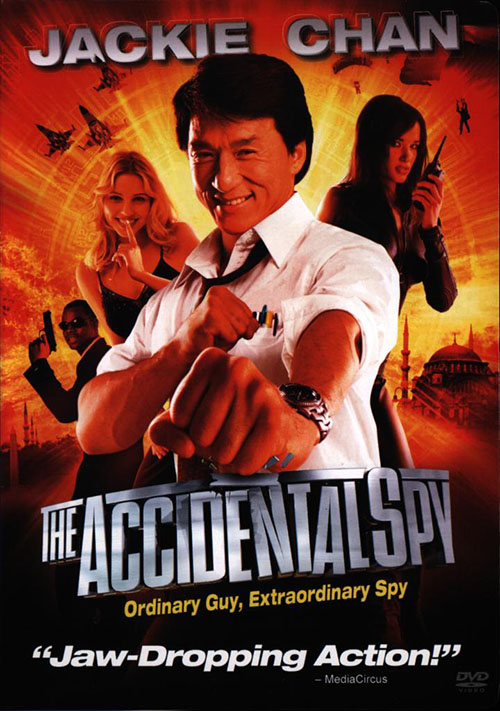 The turning point for his career was, certainly, Rumble in the Bronx, a smash hit film engineered for international audiences that also gave him his biggest Box Office success up until the Rush Hour movies. After that, the actor wanted to try and appeal to that broader audience. The movies that were brought out in the West were either previous films he'd made that had crossover appeal (Supercop, Operation Condor), or movies specifically made to appeal to that Western audience. And that's how we get to The Accidental Spy.

Although a film made with his Hong Kong team (and produced by Golden Harvest), The Accidental Spy is a film that feels specifically tailored to appeal to a broader audience than the Asian markets. The story is a globe-trotting affair, with multiple organizations (including the CIA) battling against each other. Caught in the middle is Chan's Buck Yuen (or "Jackie Chan" in the Miramax U.S. dub), a simple exercise equipment salesman sucked in because he just happens to be the long lost son of a Korean national. He runs, fights, hides, and gets caught up in international intrigue, all while winning the hearts of two different lovely ladies. It feels about as close as Chan ever got to his own kind of James BondThe world's most famous secret agent, James Bond has starred not only in dozens of books but also one of the most famous, and certainly the longest running, film franchises of all time. and you get the vibe that, had this movie been a success, it would have launched a new franchise for the actor.

Instead, it tanked even in the Asian markets (making back only HK$30.5 Mil against a HK$200 Mil budget, taking quite a loss). Even a small U.S. release wasn't able to get this film over the goal line. It's actually a pity because, despite some silliness and its low-budget feel, this is one of Chan's better movies. Sure, it shows some of his worst impulses as a producer (the female characters are still paper-thin here, and there's a whole extended sequence where Chan runs around fighting dudes in the nude that goes past funny and well into gratuitous), but it is, in general, a pretty watchable film.

In the movie, Chan's exercise equipment salesman ends up foiling a bank robbery at the mall. This nets him some fame, but also attracts the attention of as Manny Liu (Eric Tsang), a supposed P.I. Liu says he's working for a man who is, more than likely, Buck's original father. Buck is an orphan, or so he thought, but it's explained that Buck was taken out of Korea at a very young age, a refugee of the fighting between North and South. Having grown up in Hong Kong, Buck made his own way in the world, eventually getting his good job while also teaching himself kung fu (because every character Chan plays will know how to fight). After a brief meeting with his father (before the man died in an attack at the hospital where he was in hospice), Buck inherits a small amount of cash, a cross, and a key, leading to a mystery that Buck feels compelled to solve. 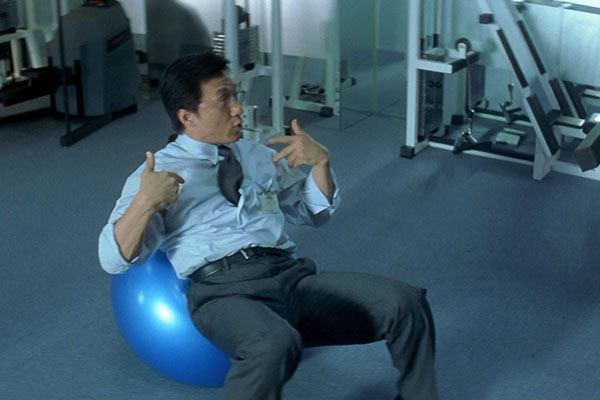 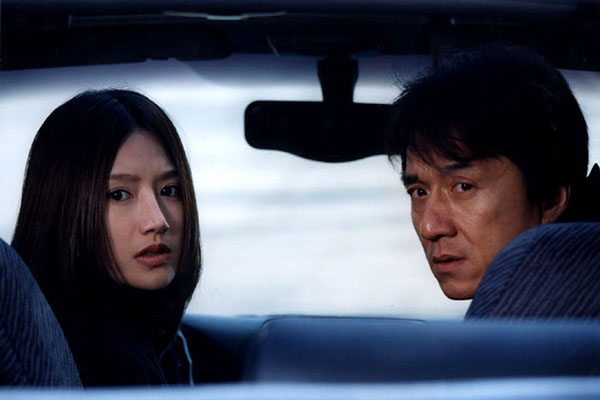 As we eventually learn, Buck's father was caught in the middle of (either [a] a drug war between rival factions looking for a super-powered version of Opium, if you follow the U.S. dub or, [b] two warring terrorist nation-states attempting to get their hands on Anthrax II in the international edition) and now the factions, who paid for the (drugs/chemical weapon) hold Buck responsible for its delivery. Either he can find the (drugs/chemical weapon) or he can die. And, around every corner, there will be guys trying to get information our of him, get the goods from him, or kill him, all while he just tries to enjoy his inheritance.

The Accidental Spy is a film that, honestly, feels like it was one revision away from being pretty good. The plot, while fairly simple, works in the context and, more importantly, the film never drags or gets bogged down (an issue with many of Chan's earlier works). It does feel, in some ways, like a throwback to his earlier movies, without the slick production values of his Western-produced films (and that might be part of what held it back at the Box Office), but in general this is a watchable movie. I do wish, though, that the flaws in the film could have been ironed out first.

To start, the McGuffin at the center of the film (whether you go with Super-Opium or Anthrax II) is just silly. It has a silly name, and in concept it feels like a placeholder added into the script that was never improved. It sounds like the kind of thing a Bond villain would boast about as he had James strapped to a table. "While the diamond-tipped rabid shark slowly moves closer and closer, leading you to your inevitable doom, let me explain my big plans for Anthrax II..." You expect something like this from an Austin Powers parody (with Dr. Evil boasting about the effectiveness of "Anthrax II" while Scott makes fun of the name) not in a serious spy movie.

Beyond that, the two ladies in the movie seriously are underwritten. One is Carmen (Kim Min), a U.S. reporter who is soon revealed to be a CIA operative. Carmen is a character that could have a meaty part in the movie, acting as a kind of handler for Buck, but instead she simply vanishes for long parts of the movie until some exposition is needed from her character. Meanwhile, the true "Bond Girl" of the movie, Yong (Vivian Hsu), is basically a pawn batted around by her drug dealer boss before being dumped on Buck. Then she dies from a fatal overdose, and that's it for her. I think her death was meant to act as motivation for Buck to go after the bad guys, but her whole plot line is short, shallow, and poorly handled. She deserved better. 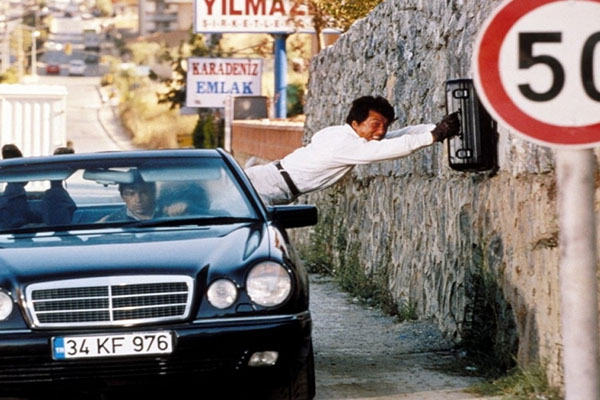 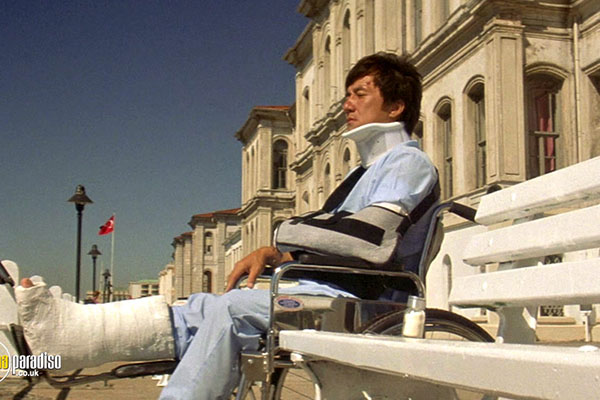 The action of the film is pretty good, though. There are plenty of action set pieces, with good fist fights throughout. A battle at a fishing village, where Buck ends up taking out a whole dock in his escape, is a strong highlight. And then there's the climactic final truck chase, which has shades of Speed and really highlights Chan's go for broke attitude when it came to stunts. These are all great sequences that are well worth watching.

The weakest sequence, though, is a fight through the streets of Istanbul where, for reasons of the story, Chan ends up naked. This sequence does have some good action to it, but it's mostly played for laughs and, frankly, it gets really silly. Chan goes from one prop to another, desperately trying, over and over, to cover himself, and while it's amusing in the short term, but the five minute mark you just wish the director, Teddy Chan (no relation) could come up with something else for Jackie Chan to do. Good try, but it falls flat.

It kinda sucks because these flaws hold back a really solid performance from Chan. He's actually pretty good playing the soulful action star here. It actually makes you long for him to not try and be such a clown in everything because when he settles down and does real drama he's pretty good at it. Admittedly comedy/action is his bread and butter, and the times he's gone into a dramatic role (such as with this, or the latter two Police Story reboots) those have been flops, so maybe his fans are there for that. I think this is one of his better performances, though, so the real tragedy is that Chan wasn't able to play to all his strengths.

This isn't a perfect movie, and I doubt most people are going to hold it up as a good showcase for all that Chan is known for. Still, you can see the bones of a really good movie in here and, with the right massaging, I think it could have been great. The Accidental Spy is a middling-to-fair movie that, like its female characters, deserved better.