Who Do That Voodoo?

Dolls are creepy. They're little plastic creations (or, if you go back far enough, wood and fabric) designed to look like humans. Some kids love to play with dolls, and that's fine if that's what they enjoy, but for many of us the concept of dolls -- toys designed to look like humans and e treated like humans by their child owners -- is creepy. No wonder, then, that there are so many movies about creepy, killer dolls. 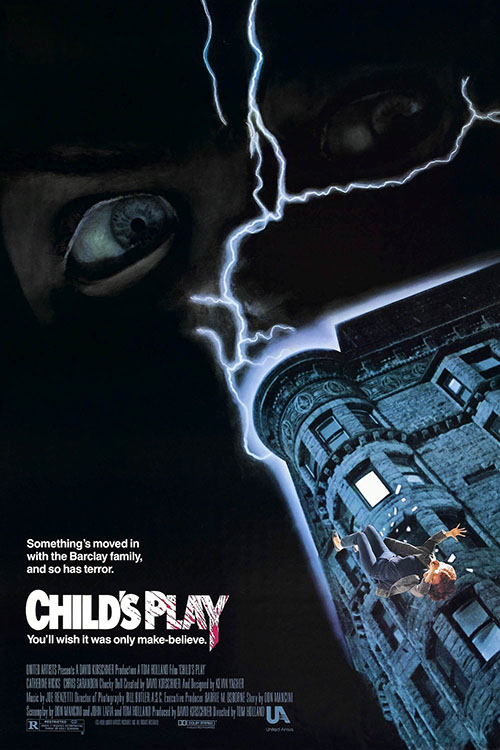 I'm not going to try and make a case that Child's PlayAlthough some might have thought that the idea of a killer doller slasheer flick couldnt' support a multi-decade spanning franchise, Chucky certainly proved them wrong, constantly reinventing his series, Child's Play to stay fresh and interesting three decades later. was the first scary doll movie -- the film Dolls predates it by a year, and you can go back to the 1940s, 1950s, and 1960s for movies like Dead of Night, Devil Doll, and Attack of the Puppet People for films that originated the genre -- but certainly Chucky is the most famous of the doll-killers out there. Only Annabelle, the Conjuring spin-off, has anywhere near the name recognition and fame of Chucky. So what makes Chucky so popular? Why has he lasted so long?

If we go back to the first film in the series, it's hard to make a case for the killer doll. Certainly this film is enjoyable for what it is -- a dumb, goofy, low-budget schlock-fest -- but it's not a very good movie. Largely it banks on a solid performance from voice actor Brad Dourif as Chucky (the actor also briefly appears in person at the start of the film) and decent special effects to carry the film. The story itself is ho-hum, and the film never really gets quite as goofy, or over-the-top, as the material seemingly calls for. It's all in the iconography for this first film, the promise of scares to come, that really carried Chucky moving forward.

Really, this first film was a valiant attempt to make something out of very little. After an opening sequence that sees strangler Charles Lee Ray (Dourif) transfer his soul into a Good Guy doll, after the killer was shot repeatedly by Detective Mike Norris (Chris Sarandon), we transition to a quaint apartment. There Andy (Alex Vincent) is celebrating his sixth birthday. He's a big fan of the Good Guys (a cartoon he watches religiously) and all he wants for his birthday is a Good Guy doll. As luck would seemingly have it, his mother, Karen (Catherine Hicks), manages to find a Good Guy even though she doesn't have a lot of money. A back-alley peddler has one doll he stole and he sells it to her, cheap. Andy is overjoyed and Karen feels like a good mother.

But, of course, bad things are about to happen. Soon people start dying around Andy and everyone thinks it's the kid that's doing the killing. Andy, though, swears up and down that it's Chucky, his Good Guy doll, that's the bad one. Is Andy just a crazy murderous kid, or is Chucky really alive? 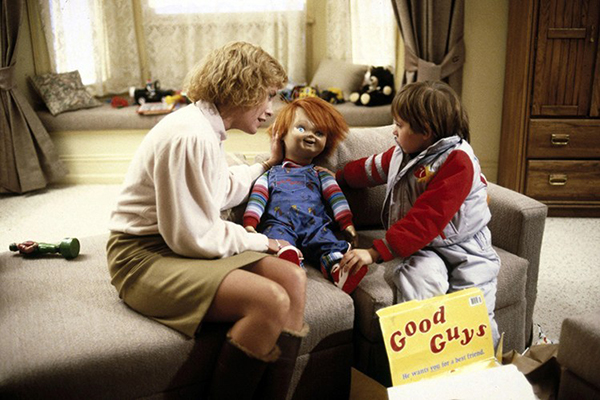 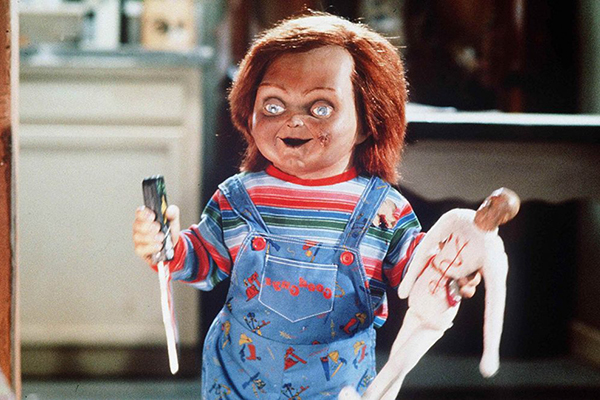 The film flirts with whether or not Andy really is crazy, and this is one of those ideas the film could have followed for greater effect. The first kill of the movie is shot in such a way that you aren't sure if it's the doll or not, and the mystery of it could have worked well if it wasn't for the fact that the movie had basically already undermined that conceit in every scene with Chucky before then. Chucky moves in ways the dolls aren't supposed to, he clearly has ideas of his own, and it's pretty obvious (even without Charles Lee Ray's voodoo ceremony at the start of the movie) that the doll is possessed by the soul of the killer. Any feinting otherwise muddies the water unnecessarily.

Besides which, Andy is just such a seemingly good kid that it's hard to think, even for a second, that he could be a killer. Honestly, after the opening sequence between cop and killer, the film shifts to a heartwarming series of scenes between mother and son, and it plays this section so well. Partly that's because both Hicks and Vincent are great actors. We've seen Hicks before on this site as she was the marine biologist over in Star Trek IV: The Voyage Home and, honestly, for as little as that film gave her to do, she was pretty great. Here she really sells the love between mother and son making these opening scenes of the movie really play. It helps, though, that Vincent, despite being a child actor, it really great. I normally hate kid actors as they seem so fake -- kids are kids so we can't expect them to also be professional actors -- but Vincent really sells the sweet precociousness of Andy. You genuinely like Andy.

But then the film seems to know this as, very quickly, it tosses aside any "is Andy the killer" mystery and just doubles-down on the Chucky show. And, don't get me wrong, Chucky is a pretty convincing killer. His design is creepy, he's well animated via practical effects, and he's voices magnificently by Dourif. As far as slasher killers are concerned, Chucky was created perfectly and needed very little tweaking over the years. Compare him to other killers: Freddy (from the Nightmare on Elm StreetThe brain-child of director Wes Craven, A Nightmare on Elm Street was his answer to the glut of Slasher films that were populating the multiplex. His movie featured an immortal character, Freedy, with a powerset like none other, reshaping the expectations for Slasher movies to come. series) went from a dark and shadowy shape to a quippy mascot, while Jason (from the Friday the 13thOne of the most famous Slasher film franchises, the Friday the 13th series saw multiple twists and turn before finally settling on the formula everyone knows and loves: Jason Voorhees killing campers 'round Camp Crystal Lake. series) wasn't even the killer in seemingly half the films and, even when he was the main dude, barely qualified as a character. Chucky though, came into this world fully-formed and never really had to change. He's great just the way he is.

Sadly, the movie really doesn't know quite what to do with him yet. Later films figure out a way to make him both a creepy dude and an effective killer, but this first movie relies on the standard slasher tricks -- stabbing and stranglings and the like -- which are hard to pull off convincingly when your killer is a three-foot-tall doll. Again, to the movie's credit, it knows this and allows Chucky to stumble quite often, unable to pull off all the dastardly kills he'd like. Knowing it, though, doesn't help the scares, and Child's Play suffers from creating a killer like this and then realistically treating the situations it causes as best as it can. Later films will eventually throw realism out the window and (by and large) are better for it. 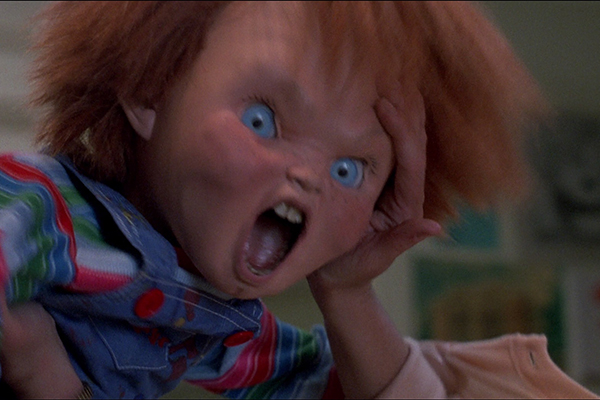 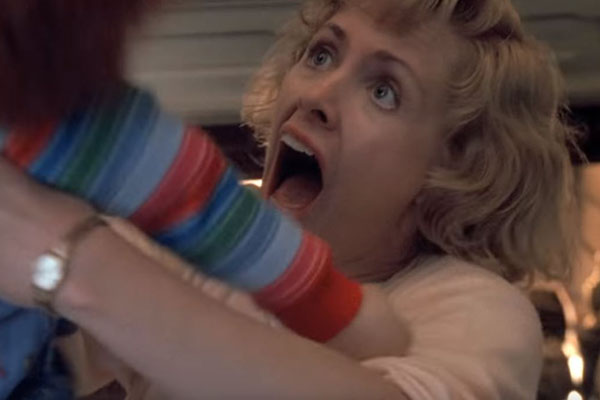 In concept I like Child's Play. It did give us another great slasher killer and, at times, it even finds a way to use him effectively. Unfortunately the movie can't quite bring it together. It doesn't quite know what to do with its killer once it has him, and then wastes a lot of time meandering around through "is Andy the killer" plotting that drags the film down. We, as the audience, already know Andy isn't the killer so it would have been better just to focus on the creepy doll instead of the kid. As good as the kid is, he's know Chucky, and that's the character we paid to see.

Not taking the threat of Chucky seriously. Chucky, by this point, has already exhibited strange behavior -- whispering things to Andy, showing up in places he shouldn't while Andy is elsewhere -- and yet Andy's babysitter, Maggie, shrugs it off as Andy just being a prankster.

And then, while Andy is asleep, strange things start happening around the apartment. Maggie again brushes it off, assuming she's just scaring herself, until she ends up with a hammer to the eye. She stumbles, trips, and falls out the window, plummeting to her death.

Four. The best friend, two accomplices, and an idiot doctor. Its a low count, but then this first movie really banked more on the creepy doll vibes than on a high kill count.