Shall We Play a Game?

I won't deny that I'm a fan of the original Child's PlayAlthough some might have thought that the idea of a killer doller slasheer flick couldnt' support a multi-decade spanning franchise, Chucky certainly proved them wrong, constantly reinventing his series, Child's Play to stay fresh and interesting three decades later. series. While I fully acknowledge that the movies are dumb, at times mean-spirited bits of slasher horror, they also are pretty entertaining, at times goofy, and all around an enjoyable series that, as of late, has been getting better and better. That's why, when it was announced that original studio United Artists was working on a reboot (since the studio retained the basic rights to the Child's Play despite having given away the rights to the series in general because the head of the studio, at the time, didn't want to make any horror movies), I was skeptical. The Child's Play series, under new moniker "Chucky", had been going strong for years so why bother remaking it? What did they hope to gain? 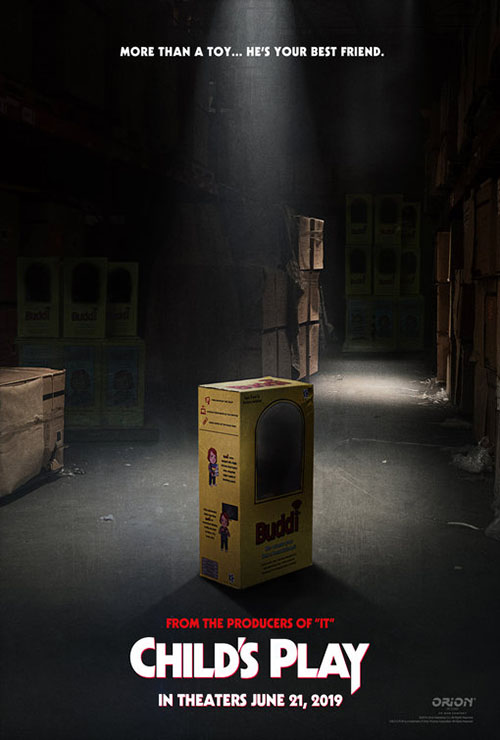 Well, okay, obviously the goal was to make money. Chucky had never really left the public consciousness (because, again, his series was still going strong), so why not capitalize on that and release a new movie in the series? It makes a certain kind of corporate logic, to be sure, but it also meant that we now have two competing versions of Chucky, one following the original thread of the series started by producer Don Mancini, and a new series that basically could be Child's Play in name only.

That's the first weird thing you'll find with this reboot. Because so many elements of Chucky are tied up in the original series (owned by Mancini and licensed by Universal), the new movie could only reuse so many elements. That's why we have a a new version of Andy Barclay (Gabriel Bateman) and his mother Karen (Aubrey Plaza), dealing with a killer doll named Chucky, but everything else -- the weird voodoo magic, the Good Guys company, anything that came in the later sequels -- is all gone, wiped away because UA couldn't use any of those elements. So, instead, the film had to go a very different route to get to a killer doll doing some murder.

In the new movie we see the Asian factory where the Buddi dolls (as they're now called) are made. Buddi (all of them voiced by Mark Hammil) is not only an A.I. doll (like a Teddy Ruxpin) but also a home hub (like Alexa) that can control any device synced to the Kaslan Corp (think Google, Amazon, and Uber all wrapped into one company). At the Asian company, one disgruntled worker decides to reprogram a doll to be evil, removing all its safeguards, right before throwing himself off the roof of the factory as a double-dose of "fuck you". This reprogrammed doll eventually ends up with Andy (after Karen steals the defective doll from the big box store she works at). Andy boots it up, gets the defective doll working, and very quickly the two of them bond like best friends.

Problem is, of course, that this doll, named Chucky even after the kid tries to name him "Han Solo", is more than just defective -- he can learn to be a murderous psychopath. Soon enough, animals and people in Andy's apartment building start dying, and very quickly Andy realizes it's all the work of the defective Chucky. But how can Andy get rid of it without Chucky trying to get his own revenge -- the doll is hard to kill and, just like the Energizer batteries probably powering it, he keeps coming back for more. It's kill or be killed when this evil Alexa has it out for you. 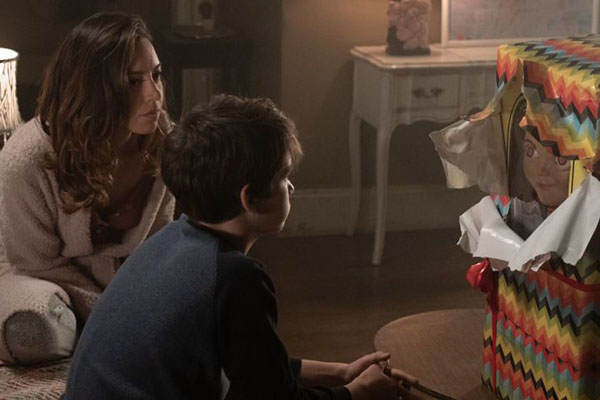 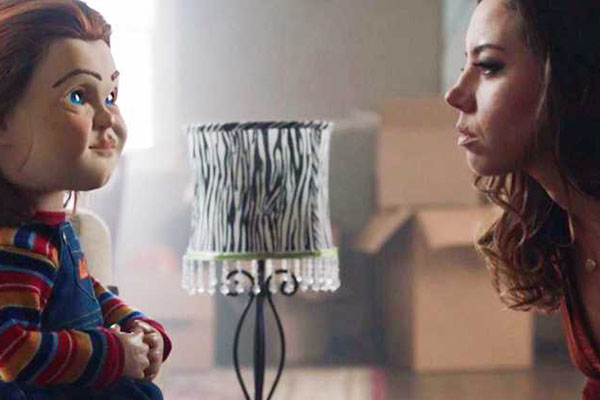 Going into the new Child's Play, the first thing that struck me was that the sweetness of the opening scenes of the original film -- how cute and warm Andy and Karen were together -- was completely lost in this film. Of course, the original was going for a sudden darkness thrust into a 1980s sitcom style family bonding story. Here, the movie doesn't care about sweetness and light -- this is the 2010s when everyone is self aware and hanging out Online -- so the film is less about blowing up an idyllic family than showing the dangers of technology. That's what Chucky here isn't just a doll, like in the original, but is also an Alexa-style hub as well. He can turn on and off your appliances at will (included thermostats and table saws, and yes, this does lead to a gruesome kill) as well as integrating with just about any other piece of technology you can think of. Want to see what happens when you self-driving car goes back? Chucky can show you.

In that same regard, the characters don't care about presenting some kind of idyllic lifestyle. Karen and Andy still love each other, but Andy is older here, more angsty teen and cherubic child. And, of course, Karen is played by Aubrey Plaza who plays this character just like she plays every other character of hers: sarcastic, mean, and pretty funny. It's like the casting director wanted to make sure that this film was populated by a very different version of the cast than the original, just one more way to distance this movie from the other Chucky series still going on.

The thing is, though, that despite all the changes the movie makes -- changing Chucky's motivation from being an evil soul in a doll to just being a dysfunctional Siri, changing the family dynamics, giving Andy friends -- the movie still ends up at the same point. We still have a very creepy doll going around killing people basically because it can. While it's motivations might be different -- it wants to be best friends with Andy and no one else is allowed into that circle -- it doesn't change the results. Chucky is still evil, he still kills people, and he still racks up quite a body count.

Oh and, of course, he can't really die. Like any slasher killer this version of Chucky will inevitably come back. Sure, it won't be because of voodoo magic, but instead because he likely downloaded his software to the cloud and is not an evil infesting every Buddi doll, but again, the end result is the same. Chucky will continue to stalk this version of Andy because that's what Chucky dolls do. So we play the game round and round all to get the same result: and immortal evil doll with a lot of blood on his hands. 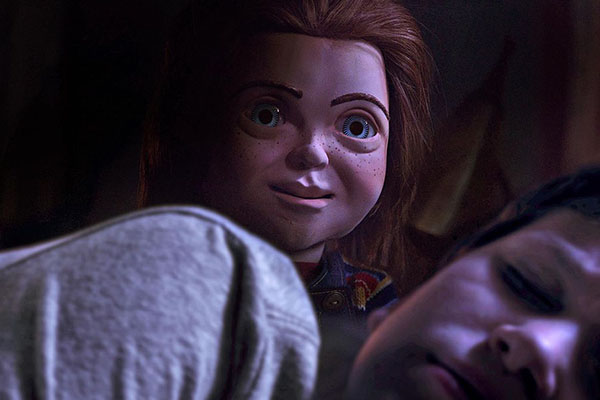 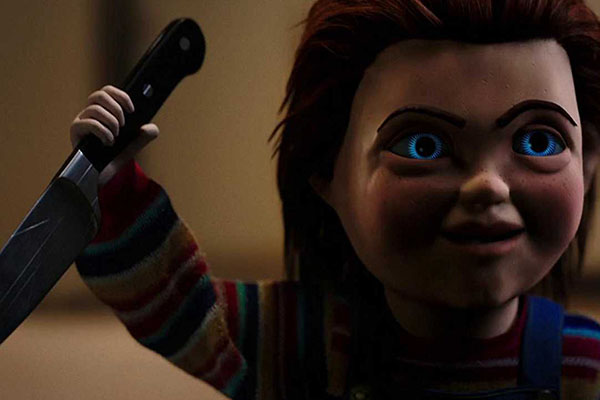 I mean, don't get me wrong. As a slasher flick, the new Child's Play hits most of the right notes. It has a ton of gore, plenty of horror comedy, and a decent body count. It moves at a solid clip (although the first real kill doesn't come until halfway into the movie) and manages to set everything up quickly and effectively. And it features a doll that might just be even creepier than the original, voice by a master artist, Mark Hammil. All the elements are there for a decently good time.

So why was I left cold by the new movie? It wasn't bad, and in fact it was really pretty decent, but it was missing something. The original flick had the right mix of elements, the contrast of sweetness and evil, a campiness that was aided by a scenery-chewing performance from Brad Dourif. Even with less gore, the original film was vastly more effective that this movie. As an extension of the brand, the new Child's Play is effective, but like any repeated riff on original material the second time around is rarely ever as good.

Theft, technically. Karen really wants a fun present for her kid, Andy, so she takes the defective Buddi doll that's returned to the store she works at. Since the doll should have gone back to the factory to be destroyed, this theft (such as it is) sets off the whole chain of events.

Well, there's the cat, but traditionally animals aren't considered official kills in slasher flicks. Oh, and I guess there's the guy that kills himself at the start of the movie, but that's before Chucky come into being so I won't count that. After the cat, though, we have David, Karen's boyfriend who's also a total dick to Andy. Chucky, not taking too kindly to the way David treats Andy, stalks David back to his house, knocks him off a ladder (breaking his leg), and then grinds his head down with a lawn mulcher before chopping off his face. It's pretty awesome.

Six (plus a cat), although two of them are questionable since we don't really see the bodies after. And there might have been more in the big climax of the movie, but they aren't really shown.