I'm Sure Fixing This Doll Won't Cause Any Problems At All

The original Child's Play was a low budget success for producing studio United Artists. Although a sequel was originally green-lit, that plan was put on hold when UA was approached by Australian company Qintex and that company noted they weren't interested in making horror films. Eventually the studio released the rights for the Child's PlayAlthough some might have thought that the idea of a killer doller slasheer flick couldnt' support a multi-decade spanning franchise, Chucky certainly proved them wrong, constantly reinventing his series, Child's Play to stay fresh and interesting three decades later. franchise to Producer David Kirschner who then, working with series scribe Don Manchini (who has worked on every film in the series except the 2019 reboot that directly conflicts with the on-going continuity of the original series), sold the film distribution rights to Universal, where the series has remained all the way to the present. 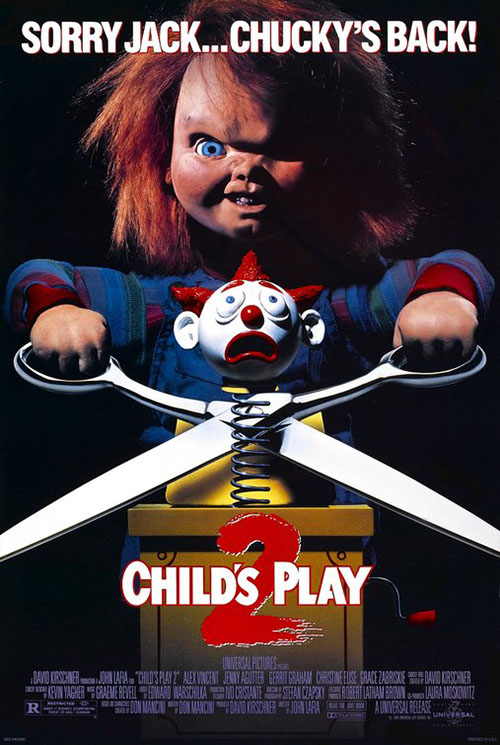 Universal is, honestly, a great choice for a horror series. Remember, Universal's bread and butter back in the day were the Universal Monster films. Horror is in their DNA. They've shown a willingness to continue horror franchises and let series wander in weird directions, such as with Jaws, so moving over to Universal was probably the best deal the soon to be dubbed Chucky series could have gotten. That said, to get to the real weird places the series would eventually go, we had to get through two ho-hum sequels, the first of which, Child's Play 2, came out exactly two years after the original film.

In Child's Play 2, child hero Andy (who, I just realized, shares a name with the child from the Toy Story movies) is still suffering after the events of the first movie. His mother has been committed to a mental health facility (because she keeps ranting about a killer doll) while the police have completely disavowed the original investigation. Andy is thus placed with a foster family, the Simpsons, while he waits for his mom to "get better". And, of course, he's still deeply afraid of the Good Guy dolls since, you know, one of them became possessed and tried to kill him. Unfortunately for Andy, the Play Pals corporation decided to rebuild the doll. Naturally the doll comes back to life, once again possessed by Charles Lee Ray, and the doll still wants to steal Andy's body so that his soul isn't stuck in a toy. Andy will have to try and convince the adults around him to believe him about the doll as murder after murder occurs.

The best thing about Child's Play 2 is that it leans into the camp of the concept. To their credit the production team clearly realized that the idea of a doll coming back to life and killing people is an inherently silly idea. While the first film did play it straight, this film embraces the goofiness of the concept, owning the fact that a killer doll really shouldn't be anywhere near as big of a threat as the films make him out to be. The doll is two feet tall and, no matter how scary his demeanor may be, he still can't have that much strength, or do that much damage on his own. The first movie tried to avoid acknowledging this but the second film embraces it.

Take the active kills Chucky actually instigates. In one scene his holds up a driver with a toy gun and then ties him up with a jump rope before finally revealing that, yes, the hold-up guy is just a scary doll. In another he kills someone by tripping them as they come down the stairs. The kills are much more realistic for a two-foot tall doll while, at thee same time, still playing up how silly it is that a killer doll is able to do this much damage. 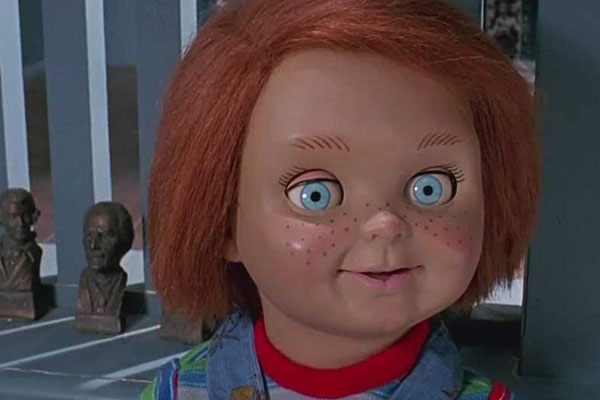 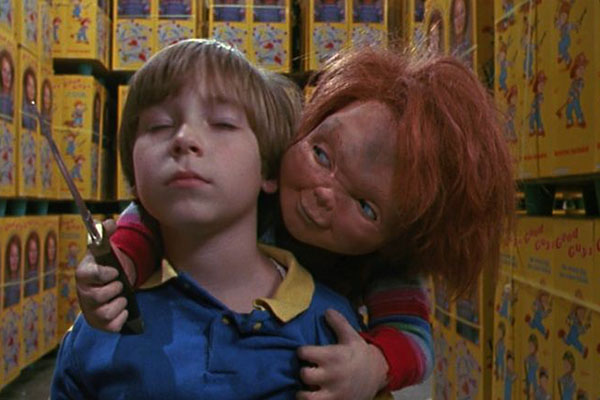 Part of what sell it, of course, is the gleeful performance of returning voice actor Brad Dourif. Dourif is the constant presence through the series, the one consistent actor through everything (except the unaffiliated reboot which uses Mark Hamil, and inspired choice sure, but Dourif is iconic in the role), and even here he has a solid hold of the his most famous character. Chucky is malicious and nasty, with a guttural growl to everything he says. Even when he's making snippy remarks or nasty banter (Chucky is a more vocal character here than he was in the first movie just because we don't spend half the film on setup and supposed mystery), Dourif still make Chucky into a malicious force.

But then, the fact that this film also had a larger budget than the original ($13 Mil, up from $9 Mil for the original) meant that the special effects could be better this time around. The Chucky doll is more expressive this time around, more nasty and evil in his facial expressions, which only helps to compliment Dourif's performance. This film really makes Chucky look and feel right, more of a character than just a special effect. It's certainly something these films never skimp on: wherever the series may go and the weird narrative decisions the films make, Chucky is always a believable, life-like character (for a certain definition of life-like), and this sequel helped to establish that mold.

The rest of the cast around Chucky really is secondary. Alex Vincent is back for a second round against the doll. This would be the actor's last performance in the series for some time, only finally coming back for a cameo in the sixth film. His performance in this movie is solid but, honestly, the film doesn't give him as much to do here. His character is, naturally, more closed off. While this is realistic it just means that Alex gives a more muted, less emotional performance. I much preferred him in the previous film where he got to act like a sweet, good natured kid and I missed that about his Andy this time around. Of course he didn't have his mother's character to play off, and they're fantastic dynamic to go with it, so I guess that should have been expected.

Everyone else, though, are random adults to be introduced and disposed of just as quickly. If the camera lingered on anyone over the age of 20 for longer than a few seconds you can be sure they'll get killed by the doll in some capacity. It's actually kind of a neat spin on the standard slasher formula, when you think about it, because Chucky only kills adults, not teenagers like in most other slasher series. I can appreciate the inversion of the standard slasher tropes, I just wish most of the adults in the movie were better fleshed out, more fully realized characters. Instead, each is just a single personality trait that's then repeated and blown out until they die. 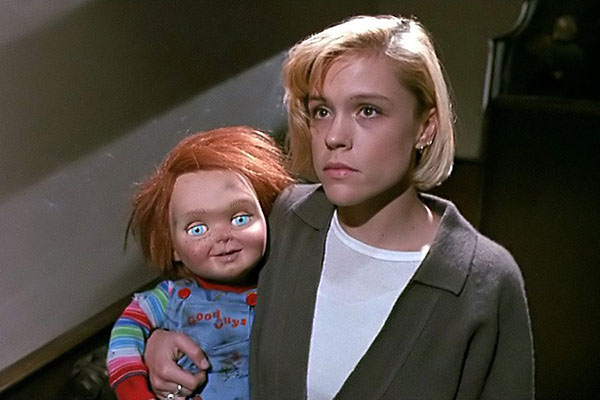 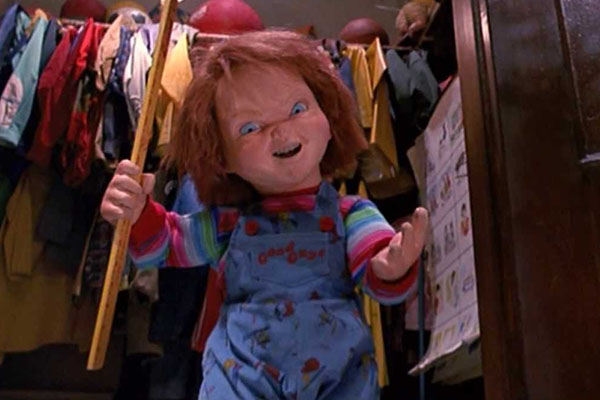 And, really, that's what hurts this sequel the most. In Child's Play 2 the most interesting character isn't the hero but, instead, it's Chucky. He's the de facto lead despite the film still trying to sell us on the human characters. Unfortunately, we'd get one more movie about humans battling Chucky before the series would embrace the inevitable and just make the killer doll the antihero lead of the piece.

Hubris, as seemingly so often happens in slasher flicks. The makers at Play Pals Toys decide to rebuild the Chucky doll (since they have to assure their shareholders that there's nothing wrong with their toys). And, of course, something goes wrong.

When rebuilding the doll, the machinery goes on the fritz. One of the workers tries to fix it and is electrocuted by the machine (which is hooked up to the rebuilt Chucky doll). It's a stupid and over-the-top death and I loved it.

Seven. The worker, a Play Pals upper manager, a teacher, both foster parents, the group home manager, and a Play Pals line worker.