I think it's fair to say that after the release of Child's Play 3 the Child's PlayAlthough some might have thought that the idea of a killer doller slasheer flick couldnt' support a multi-decade spanning franchise, Chucky certainly proved them wrong, constantly reinventing his series, Child's Play to stay fresh and interesting three decades later. series felt played out. Universal had rushed the threequel into development after the success of Child's Play 2, but that rushed development hobbled the final product and, for a time, basically squashed any desiire to see further adventures of the killer doll. If the series were to come back what it'd need is a real shake up. 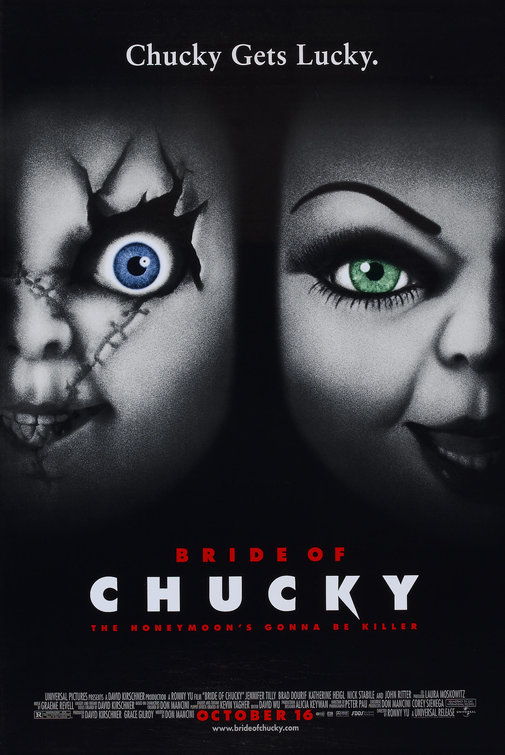 And a shake up is what it got. Ten years after the release of the original film, Chucky returned with the very different Bride of Chucky. Gone was Andy and any note of Chucky wanting to get his revenge on that kid or steal his body or whatever. Instead the film opts to widen its scope, introducing a second doll, Tiffany, and a different kind of murder-adventure for its characters to go on. As a one of Bride really works and, in a way, it helped to reinvigorate the series and make everything seem fresh and interesting again.

In Bride of Chucky we're introduced to Tiffany Valentine (Jennifer Tilly), one-time giirlfriend of Charles Lee Ray (of course once more voiced in Chucky form by Brad Dourif). After the serial was killed, Tiffany came home to find a diamond ring waiting for her. After finding out that her lovr was dead, Tiffany kept an eye out for news (as she knew about the voodoo and the possibility Charles might find a way to transfer his soul to a new host). Tales of the killer doll Chucky spread and Tiffany eventually was able to track down the possessed toy, getting her hands on Chucky ten years after he originally died. With a little voodoo and some luck, she brings the doll back once more so she can live happily ever after in deranged bliss with Chucky.

Except there was one flaw with the plan: Chucky never intended to marry her; the ring was just something he stole. Hurt, Tiffany locks up Chucky and goes about her life. Tot taunt him she even buys Chucky a wife, a doll in his size for him to hang out with. Unamused, Chucky breaks free, kills Tiffany, and traps her soul in the wife doll. Then the two plot a way to find new bodies (with the use of a special amulet retconned into this film), all they need are a couple of patsies. Enter Jesse (Nick Stabile) and Jade (Katerine Heigl), two young lovers trying to escape their life (and Jade's Uncle, the chief of police, played by John Ritter). These two inoocents end up taking the dolls across country, all according to Chucky and Tiffany's plan and, with a little luck, the dolls might have the amulet they need and two fresh bodies to use (sorry Jesse and Jade).

While the previous films had largely been more serious horror films (barring the fact that Chucky was always a wise-cracking smart-ass), Bride of Chucky went in a different direction, playing more like a horror comedy. The two leads, Chucky and Tiffany (Jesse and Jade are really side characters to the dolls), banter back and forth about the best ways to kill peeople, setting off elaborate kills. It's a shtick that works really well, deriving both scares and laughs at the same time, giving the series fresh energy. Considering the rut the films were in leading up to Bride, this shift in tone does wonders to reinvigorate the series. 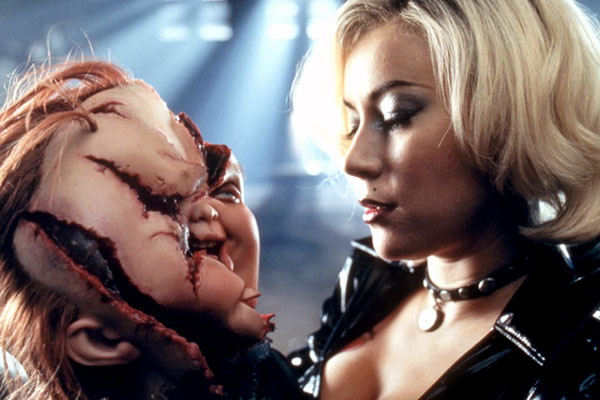 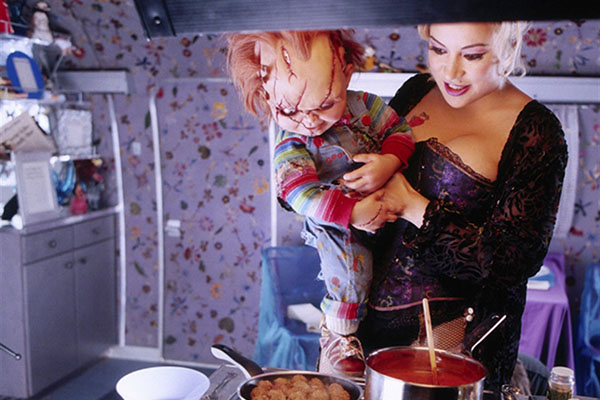 Also working to the film's benefit is director Ronny Yu. Yu had made a name for himself in Hong Kong cinema, directing a number of films across genres. Prodcuer Don Mancini brought the director on for a fresh perspective on the series and the director delivered. This is easily the artiest movie in the series, featuring contrasting lighting, special camera angles and effects, and a whole lot of lush cinematography. It's still a slasher flick, and one featuring Chucky, but there's a classiness to the tacky setting and characters, a contrast that aids the movie. It's fun watching the spray of bloos, the light reflecting as it oozes, and then cut to Chucky and Tiffany making a joke about it. It's a mirthful, classless art that walks a fine line and gets away with it.

Naturally, the movie is powered by the performances of Dourif and Tilly. I wouldn't have thought that the addition of a second doll would have worked (the how and why were something that seems stupid on paper but function admirably on film), and yet that back and forth banter really improves the whole concept of the series. Dourif has always been great but here, with material to sink his teeth into and someone to banter with, the actor is at the top of his game. Tilly, meanwhile, gets to vamp up here character, playing someone right in her wheelhouse while, similarly, feeding off her co-lead to deliver a strong performance.

if anyt part of the cast holds the film back from perfection it's the co-stars, Heigl and Stabile. Naturally enough, the two teens aren't ever touched as this film series likes to kill adults, not kids or teens (making it the rare exception in the Slasher pantheon), but the two actors still have to go through the motions of slasher cinema scars. Heigl, for her part, at least has the charisma to sel her love-struck teen even if she isn't able to really convey the scream queen scares she has to. Her Jade is still miles better than Stabile's Jesse, who just seems lost in most of his sceenes. Apparently acting across from puppets wasn't something he could get used to, rendering our nominal male hero into kind of a dud.

But then, really, we aren't here for the humans. Everyone outside of Chucky and Tiffany are fodder for the killer dolls and, by and large, are treated as such. What we really care about are the kills, and on this front the film does deliver. This film goes heavy on the build up to the kills, letting each scene play out in delicious anticipation before the big moment when the dolls act and the blood begins to flow. It's glorious, with many of the kills often being quite inventive. This film has easily the best set of kills in the series so far, let alone better kills than most of this era of Slasher cinema (only the original Scream is able to keep up, really). 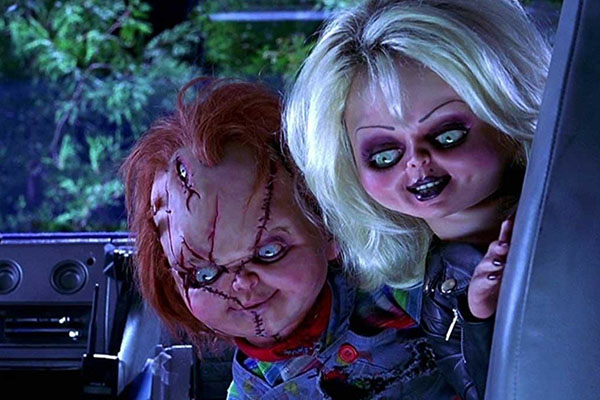 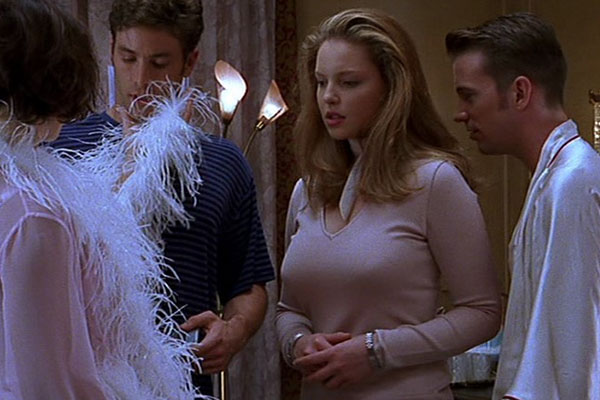 In just about every way Bride of Chucky takes the concept from the original film and builds on it to grow and enhance the series. It's the rare Slasher sequel that's able to improve on the original and find new ideas and fresh concepts to explore. Seven years between films really benefitted the series, giving us a sequel that truly feels fresh. Bride of Chucky is a gleeful, malevolent little film that, in many ways, sits as the best film in the whole series.

Greed. Chucky died at the end of the last movie, but there's always money to be made, so a cop steals the doll from evidence lockup. Then he gets what's coming to him.

That cop then gets his throat slit when he takes the doll to the drop-off point. He gets surprised, and we get a very artsy shot of blood dripping down his hand. Nicely done.

Ten. The cop, plus Tiffany's boyfriend, the heroine's uncle, and then seven people along the way on the road trip of carnage.