And here we are into the seventh film in the "Chucky" series. Honestly, we should all be impressed that the Child's PlayAlthough some might have thought that the idea of a killer doller slasheer flick couldnt' support a multi-decade spanning franchise, Chucky certainly proved them wrong, constantly reinventing his series, Child's Play to stay fresh and interesting three decades later. movies have come this far; considering where we started, who would have thought the movies could have made it this far. Sure, the series had to go direct-to-video for its last two releases (so far) but, if anything, that only freed it up to get weirder and really explore new avenues. The freedom to not have to worry about theatrical grosses was clearly liberating for the series. 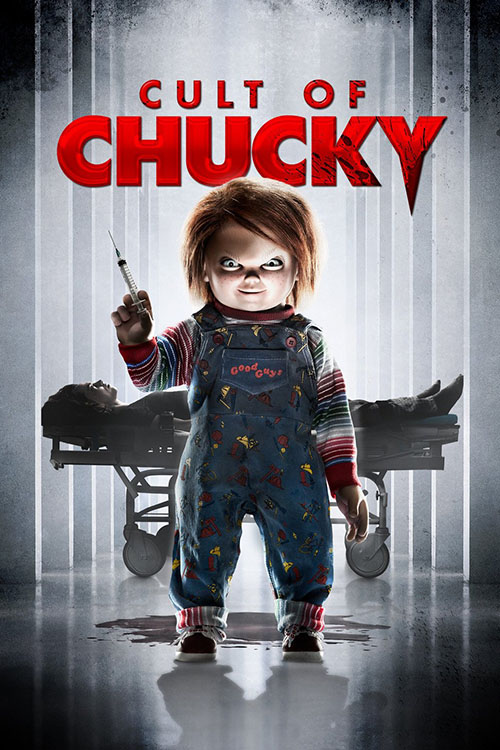 How liberating? Well, we're going to have to get into spoilers to really talk about this movie. Considering that it's still fairly new (at least in the overall length of time the series has existed), there's a chance fans of the series still haven't seen this once. If you want to avoid spoilers just know that this movie revels in the implications of its own continuity and has a ball getting as weird and evil as it can. If you liked any of the Chucky movies up til now, this movie will be right up your alley. For everyone else that doesn't care about spoilers...

Here There Be Spoilers

The Chucky flicks have always been willing to play around with the rules of the voodoo magic animating our lead villain. The first few films had him focused on Andy, possessing the kid so the youngster could act as a new host for the doll's evil soul. But with the fourth movie on the series really doubled-down on its own magic. If Chucky could make a new friend to hang out with him -- Tiffany -- why couldn't he make other dolls. What about copies of himself? What's limiting him from making as many evil Chucky dolls as he could? He already copied his soul onto a doll so how far can this conceit go?

All the way, as Cult of Chucky illustrates. Picking up soon after the events of Curse of Chucky, we find our heroine Nica (a returning Fiona Dourif) in a mental hospital after being blamed for killing her whole family (which was, of course, Chucky's fault). In the mental institution her doctor brings a Chucky doll into therapy as a way to show, "hey, this is just a doll." And then another doll is given to her. And then another one shows up. And, wouldn't you know it, one or more of them are possessed, each with the soul of Charles Lee Ray inside them.

As Chucky eventually explains it, he was poking around on Voodoo For Dummies.com when he found a new spell he could use to transfer himself over and over again. This allows him to stalk as many people as he likes, killing and destroying with impunity. It also means he's building himself a cult of Chuckies, an army of evil to stalk the night. It's up to Nica, along with a returning Andy, to try and find a way to stop Chucky, as well as stop Chucky, and stop Chucky, before the evil dolls grow their legion and spread too far to be stopped. 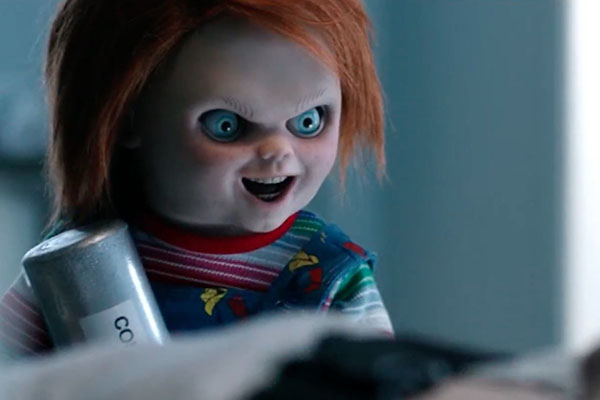 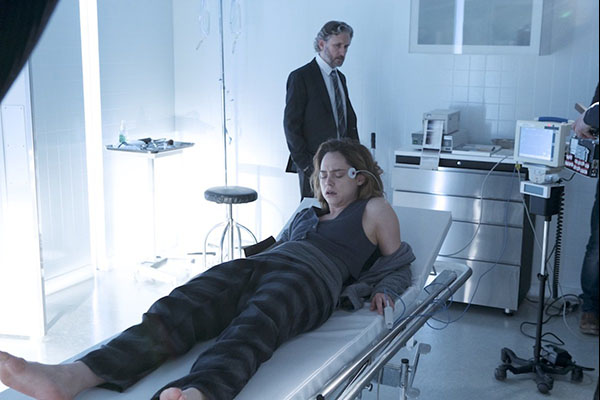 While the last movie acted like a stand-alone adventure, almost a reboot (right up until it wasn't), this film doubles-down on the continuity, bringing back a host of characters you wouldn't have expected. Andy's original actor, Alex Vincent, returns to reprise his role, a grown up Andy that, even now, still hasn't gotten over the evil doll that stalked him for so many years. Tiffany actress Jennifer Tilly returns as well, once again playing Tiffany-possessing-Tilly (and voicing another Tiffany doll as well, because why not?). We even get a cameo from Child's Play 2 actress Christine Elise reprising her role of Kyle for a cameo.

The nods to past continuity are great, giving this film a momentum to his story as you get the feeling everything is building to a huge confrontation. And it is, just not in this movie. This film revels in the idea that Chucky is unstoppable and, because of that, it's one of the few Chucky movies to really end with the doll winning -- Chucky sets himself up to really own the city (or whatever) with his cult of the damned. It'll be up to Andy and Kyle for the next film (and the television series as well that tucks in between them, whenever they come out) to tell the tale of that final confrontation.

That would be a knock against the film, the fact that it doesn't really give us a truly complete story -- everything hinges on the next couple of acts to tie the story off once and for all. And yet I really didn't mind because the film just gets so bugnuts crazy. It starts with Andy torturing the head of the doll that came after him in the last movie, then we seem to jump ahead in time to a rebuilt Chucky doll, but that's just a diversion. As more and more dolls are dropped in you start to wonder which one is the real Chucky. What's the shell game and what is the movie up to? Of course then it yanks the carpet out and shows you that every doll is the real Chucky and that you can't trust anything because the whole world is out to get you.

It's rewarding, really, as this is a Slasher series that actually pays attention to its own mythology and, without explaining everything to the point of obnoxiousness (do we really need to know why Michael Myers likes to kill? Do we need to see Freddy gets chased down by the angry parents? Do we need to see why Jason picks up his mask?) it fleshes out its own rules and uses them as a jumping off point to tell a crazy, original story perfectly set within the continuity of the series. It's a movie that the producers have clearly wanted to make for a while (they were talking about having Chucky make copies of himself since the third entry), and this labor of love pays off in just about every way. 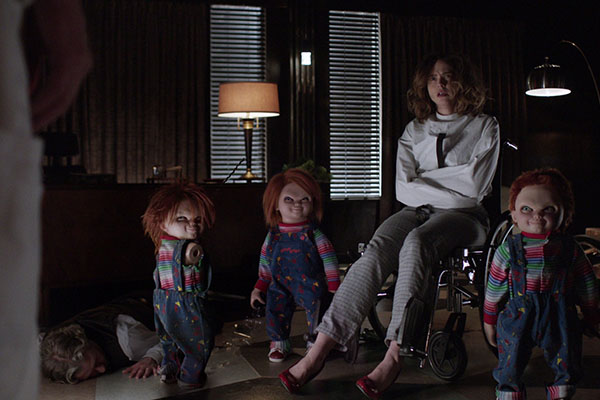 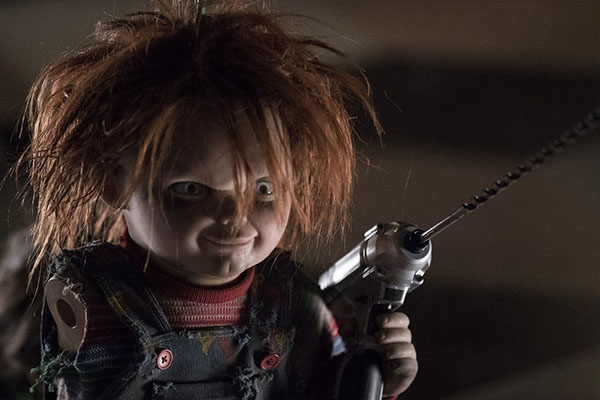 This film works in so many way and not just from the rug pull, "everything you know is a lie" perspective. The film is pretty scary, aided in part because it's set in a closed facility (mental hospital) that the characters can't escape from. Nica is trapped in here with the killer doll(s) and even if she knows what's going on there's no way to prepare for it because no one will believe her and certainly because she can't get any weapons to aid her. Plus there's the fact that she's trapped in a wheelchair so even if she wanted to run, and somehow could escape, her options were limited. She a captive victim which only ups the tension.

Really, about the only knock I have against the movie is that the special effects just aren't as good here as they were in Curse of Chucky. I loved the doll effects in that film but here, with all the extra dolls and more elaborate kills on display (this is a very gory Chucky film) the special effects take an overall hit. The film is ambitious but the budget wasn't there to make the ambitions look really good.

Still, the Chucky flicks have always felt a little cheap so a slight downgrade in effects just feels of-a-piece with the rest of the series. Despite this, overall the film is a total success. The movie goes to places Chucky hasn't gone before and does it with aplomb. You'll be hard pressed to find a more enjoyable flick in the series. Now here's hoping the next one is just as good so we can run the series out on a high note.

Delusion. Nica clearly knows what happened before, in the last movie, but she gets deluded into thinking it was somehow her fault, that she went crazy and killed everyone. This delusion gives Chucky a toe-hold he exploits.

Technically an old woman, although we don't really get to see the kill in action, just the promise of it and then a grave afterwards. Not the best kill in the series, but then this movie is more about the build up than a high kill count.

Eight, counting the old woman, plus three patients, two orderlies, a guard, and a doctor.