In the Army Now

I will admit that I find get plenty of enjoyment from the Child's PlayAlthough some might have thought that the idea of a killer doller slasheer flick couldnt' support a multi-decade spanning franchise, Chucky certainly proved them wrong, constantly reinventing his series, Child's Play to stay fresh and interesting three decades later. series. Slasher movies aren't for everyone, I do realize this, but for those of us that like slashers its always felt like the Chucky movies were something different, a little special. A lot of that is because the lead killer, Chucky, is an interesting killer, fully realized upon creation and allowed to adapt and evolve as the series continued. Unlike the killers from some other slasher movies, Chucky has a clear set of motivations (the joy of killing) and goals (get out of his doll-body) and he knows how to do it (with hoo-doo voo-doo). Compare that to Freddy who wanted revenge on the Elm Street kids and, after a certain point, had gotten it, so why was he still killing? What was driving him to come back again and again? With Chucky you don't ask those questions, you know the answer. 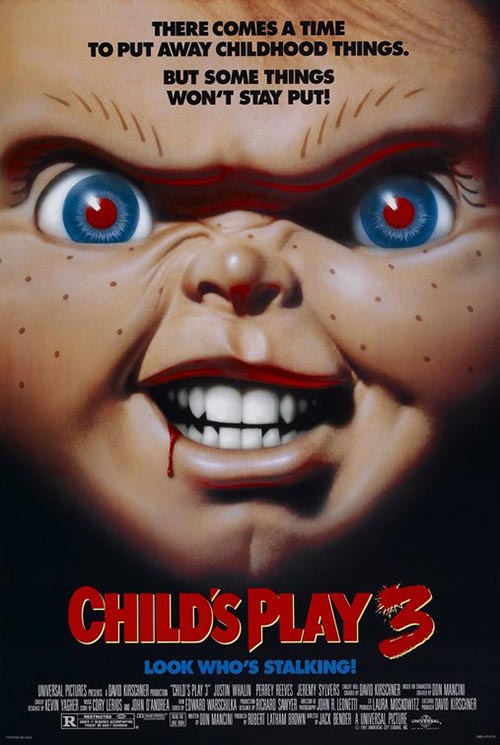 Even in the worst movies of the series Chucky's character is never lost. And when it comes to the worst films in the series, Child's Play 3 certainly takes the cake. The series is not without its stinkers (I'm not a fan of Seed of Chucky, for example), but this third entry is certainly the worst of the worst. It's a muddled movie that can't find anything creative to really say about the series so it basically just retreads plot beats we've seen before. It's a tired and tedious sequel that really wasn't needed and, were it not for a solid reinvention to follow, could have spelled the obvious end of the series.

Part of what makes this film so bad is just how superfluous it really is. When we start the film we witness the Play Pals company once again cleaning up their last mess and reopening their factory. In the progress, wouldn't you know it, they manage to once again revive Chucky and give the killer doll (last seen melted and destroyed) a new body he can use. So what does Chucky immediately do with his new body and newfound freedom? He tracks down the kid from the last two movies, Andy Barclay (Justin Whalin, taking over the roll from Alec Vincent for just this film), so he can take over the kid's body and once more be human. Remember, Chucky has to take over the body of the first person he reveals his secret to and, years before, that person was young Andy, so Chucky is back on Andy's trail once more.

Andy, meanwhile, has been remanded to the custody of the Kent Military School. Past foster homes haven't worked out for Andy (funny how being stalked by a killer doll, twice, might give you some emotional issues) so the state has decided that military school is the only option for Andy. Chucky has himself delivered (by mail) to Andy, but before Andy can open the package a new kid, Ronald Tyler (Jeremy Sylvers), opens it instead so he can play with the Good Guy doll. Chucky then realizes he might have a new stooge to transfer to since this is a new body. So now Chucky has two goals: kill Andy and also take over Tyler before he can be stopped.

Credit where it's due, the military school setting is at least different from the settings of the two movies. We're not dealing with another nice family taking in a poor kid and then, one by one, getting slaughtered in peaceful suburbia. That said, the setting of the movie is about the only difference as the formula of Child's Play 3 remains the same as in the previous films: Andy finds the doll, tries to tell anyone that will listen that the doll is alive, no one believes him, and then steadily, one by one, people are killed by the doll while everyone else just assumed it's bad luck or, maybe, Andy's fault. 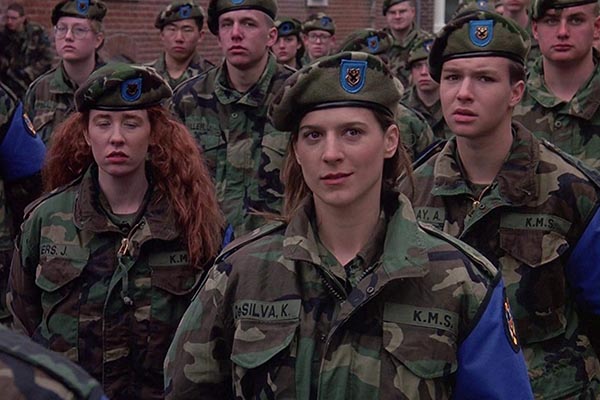 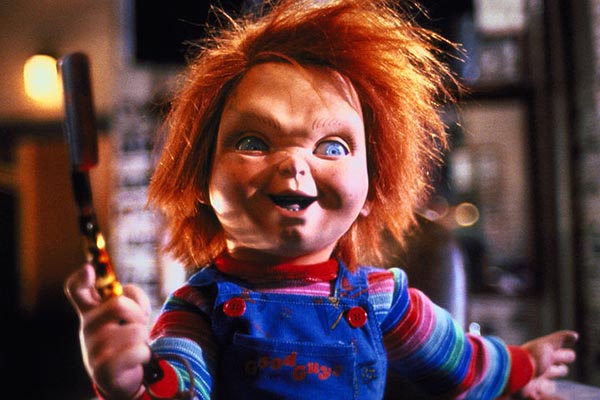 The one new concept introduced in the movie -- maybe Chucky doesn't need to take over Andy's body to live as a human again -- isn't really explored at length here. It's a great concept, and one later films will do much more with (you mean Chucky might be able to take over anyone?), but here the film half-heartedly uses Tyler as bait to suck Andy into the story again. That's as far as the movie is willing to pursue the idea, and even then it's only to try and give Andy yet another heroic climactic encounter with the doll.

Not that the climax of the movie, or, really, any of the rest of the action therein, is all that interesting. Child's Play 3 is a lazily put together production, one that screams of disinterest and boredom with the concept. Most of the set pieces are simple affairs with little in the way of gore and barely any setup. The characters that are killed aren't all that interesting, so you don't care about them, and even characters that seemingly deserve to die are eliminated in slapdash, simple style that ruins the build up of their deaths. Over all the killings, the main draw of a slasher flick, aren't anything to get excited about at all.

Honestly, it's obvious that the production team wasn't able to muster the energy they needed for this movie. Child's Play 3 was rushed into production after Child's Play 2 debuted at the box office, coming out nine months later. That's not a lot of time to get a movie together -- writing, casting, location scouting, costuming, filming, editing, post production -- the movie suffers from the rushed schedule. The concepts at play -- Chucky finding someone new to inhabit, and the possibility of the doll transferring himself to others over and over -- are cool but the movie can't follow through because there just wasn't the time to develop it.

Seriously, everything about this movie is bland. For the starters, Whalin doesn't bring much charisma to the role of Andy. While he's a decent looking guy (he was a soap opera star, after all), he doesn't really bring anything special to the role, leaving us with a big void at the center of the movie. The other characters introduced -- Perry Reeves as love interest Kristin De Silva, Jeremy Sylvers's Ronald Tyler, Travis Fine as roid-raged-out Cadet Lt. Col. Brett C. Shelton -- fill roles required for the basic structure of the movie but don't really do anything with their time on screen. It's all just a lot of padding until the end credits roll. 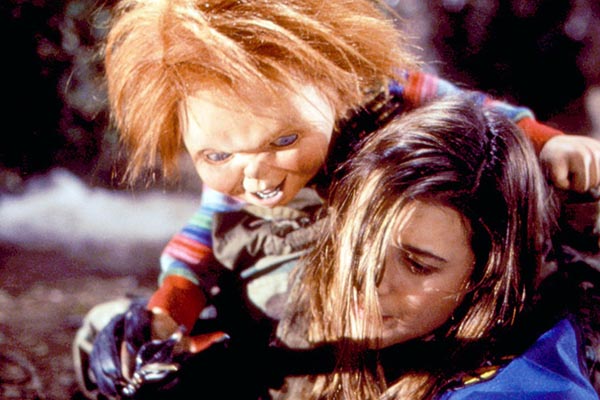 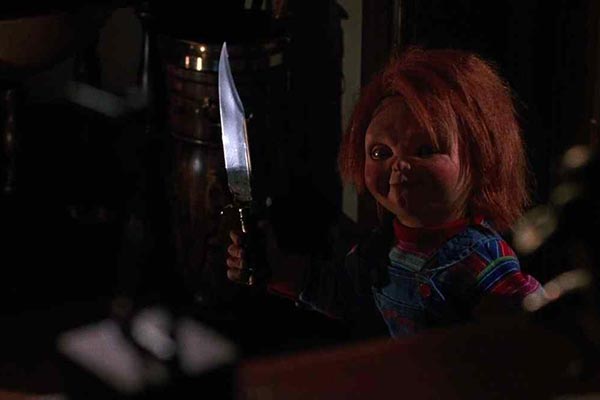 Even Chucky, the one part of the movie you'd expect to be great, is pretty awful. The killer doll isn't in a lot of scenes with way too much time spent developing the military school and Andy's time there. Even when he's on screen he's not all that special; the effects for the doll look especially cheap this time around. Meanwhile, Brad Dourif just sounds bored in his third go-round as the crazed killer. I assume he saw that the script was nothing special this time around and just did it for the paycheck (and we don't blame him for that).

All around, Child's Play 3 is just a waste of a movie. Certainly I've seen worse slasher flicks, but as far as this series is concerned, this third outing is easy the worst we'll ever have to witness. It would take something special for the series to recover from this awful film. Thankfully, the next entry brings something new to the table...

It's always hubris in these movies. Years after the Good Guys dolls were discontinued, the Play Pals company president elects to restart the line. Because nothing bad has ever come from these dolls.

Chucky, of course, is the first doll off the line (and once again possessed by Charles Lee Ray). The president of the toy company gets the first doll, takes it home, and, wouldn't you know it, Chucky makes him regret that decision. Nothing like a good strangling with a yo-yo to open a slasher flick.

Seven. The company president, a garbage man, two of the faculty at the academy, two students, and a rent-a-cop.