I'm not necessarily the biggest Mission: Impossible fan. I've not seen any of the classic TV series episodes (for the 1960s and 1970s), nor its 1980s revival that lasted two seasons. And the first couple of movies in the Tom Cruise series also didn't hook me. It felt like a 1990s techno thriller, one of a number of pretty generic action movies released through the decade. the M:I films weren't even must watches for me until after I caught M:I 3 on DVD months after its release. That film hooked me, felt like something different, and since then I've kept an eye on reviews to see which ones of the follow-ups were really worth watching. In essence they all were, and that's largely because Tom Cruise is a crazy man. 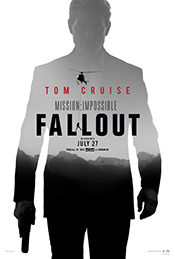 Of course, part of my initial disinterest in the M:I films is largely due to a lack of interest in Tom Cruise. I really don't care much for his early output, from Top Gun to Days of Thunder and Cocktail. He's essentially played the exact same character -- a smug and cocky dingus, which I assume is, in reality, the real Tom Cruise -- for the entirety of his career. Most of the time it doesn't work for me. In recent years, though, as Cruise has aged (he's no longer quite as fresh faced as he once was), it seems like mortality has become a theme of his movies. I'm not just taking about Edge of Tomorrow (although, seriously, if you want me to talk about that film more, I'm happy to), but his other action movies as well.

The most recent version of The Mummy was essentially about Tom Cruise dying, coming back, and then being unable to die, over and over, no matter how hard he tried. Remove the fantasy elements and you essentially have every M:I film dating back to the first one when it looked like Tommy strapped himself to the top of a speeding train. As the films have progressed, his stunts have become more over-the-top (hanging off the world's tallest building in Ghost Protocol, clutching onto the outside of a door of an airborne plan in Rogue Nation), giving us not only the thrill of seeing his character nearly killed over and over, but also seeing the actor do it as well.

Watching Tom Cruise really do his own stunts (much like Jackie Chan used to do in all his martial arts films) is the big selling point of Cruise's movies now. We've seen him play a smug prig long enough that watching him dragged through hell takes some of the shine off his personality. We see him as more than just that jerk coolly walking through life. He's doing horrible things to his body in the name of good action, and, weirdly, it humanizes him. We actually start to like not only the characters he plays but the actor as well. Sure, he's probably having fun learning to do high-altitude parachute jumps and taking helicopter piloting lessons, but these are difficult stunts to plan and organize and Cruise puts himself through it instead of saying, "you know what, my stunt guy can do it."

Actually seeing Tom Cruise do these things does also make the action sequences better (its not just the thrill of seeing him almost kill himself). When you have a normal Hollywood action shot, most of the scene is filmed from behind the actor's back, or from a distance, or in some way shot to hide the fact that they're not actually doing the shots. Most actors aren't crazy enough to do their own stunts so Hollywood has any number of techniques for hiding the fact that their A-List actors are barely in many of the big sequences of a movie. 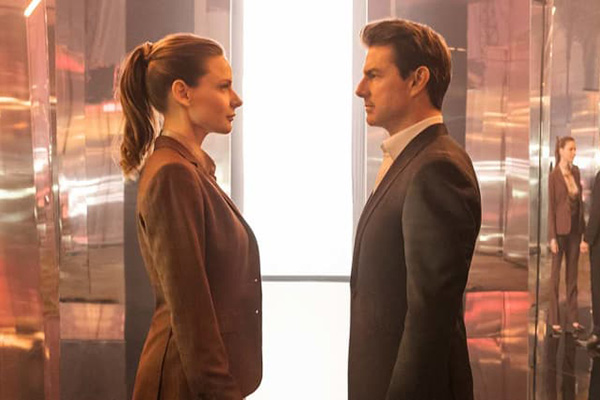 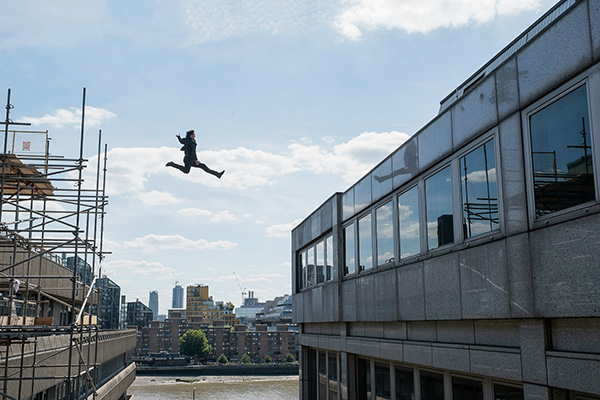 Fallout, though, doesn't ever have to do that. The big action sequences are the parachute drop (done in one seemingly continuous take, no less), a high-speed motorcycle chase, and a helicopter chase through mountains that starts with Cruise's character scaling a rope up to the helicopter which is already flying high over said mountains. In each sequences we clearly see Cruise, clearly see he's doing this crazy stuff, and never once go, "meh, that's a green screen," or, "wow, Cruise's stunt man had to be paid a lot for that sequence." I have to assume, in fact, that Cruise's stunt man probably has a cushy job. "Oh, you're going to do this, Tom? Cool. I'll just sit here and have a cappuccino while I collect a paycheck. No, no, don't worry about me."

The actions sequences in Fallout are immersive. They're edge-of-your seat thrill rides because, the whole time, clearly anything could have gone wrong and we would have been short one Tom Cruise from that moment forward. But they're also great because they're well plotted, well filmed, and well executed. Director Christopher McQuarie (the first director to ever be given a chance to film two films in this series) clearly brought his A-game, bringing great performances not only out of the cast but the stunt coordinators too. Everything is so well executed that you never once think, "wow, this is an awesome movie." You never have time to even think about how it's actually a movie because you're that in it.

Well, okay, you never think about the fact that it's a movie while the action sequences are going on. The rest of the time, though, the seams begin to show just a little.

The plot of Fallout is a direct follow up to Rogue Nation (which we'll get to in a later article). Essentially, the villain of that piece, Solomon Lane (Sean Harris), had a network of terrorists he was working with (and, essentially, headed). After his capture at the end of that movie, his organization, the Syndicate, has been working ever since to not only free Lane but also follow up on his big plan to explode a nuclear bomb and cause mass havoc around the world. It's an interesting premise and it allows for a lot of the fun M:I style antics the series is known for (undercover work, a fair bit of rubber masks and double-speak, and lots of gun fights). This all works well even if, every time the movie revisits beats from previous films (like said rubber masks) we go, "oh, right, they did this over here, too." 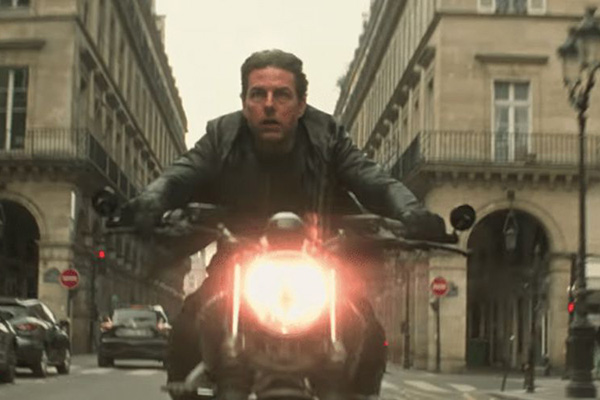 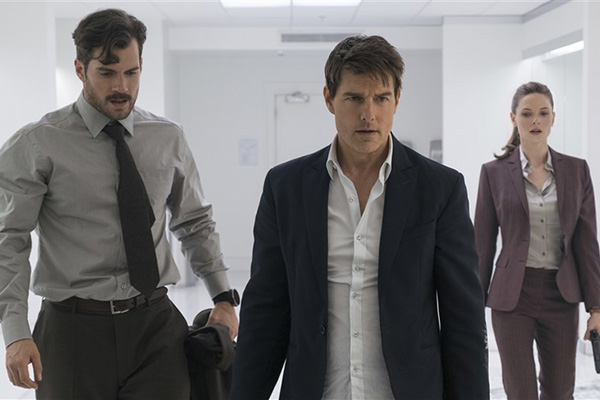 And there's a big twist half-way in that anyone paying attention in the audience would see coming a mile away. I'm sure the twist, and the betrayal that follows, was supposed to have weight, to mean something, but none of it really comes together. The gut punch that should have followed doesn't connect, you don't really care about the why of it, and then the move speeds along to the next action sequence, leaving the story behind once more.

How much this will bother you really depends on how much you care about this series, then. My own tastes have waffled in an out of this film series, of course, so if the story of one M:I film doesn't really come together, I don't tend to mind too much. We still have great action, a bit of espionage, and lots of shoot outs. Oh, and seriously stellar helicopter chase. For me, that was enough. Others, though, might feel like the story could have been better, or that some of the twists could have been twistier, and I totally understand that. When there are holes in a story, it does usually bother me too. I get it.

But then I watch the crazy man throw himself off yet another building and I remember what this whole series is all about. Fallout may not be the smartest spy film or recent memory, but it is certainly the most propulsive. That's why, for me, it was an absolute winner.