A (Small) World of Possibilities

Somewhere in along the way NintendoSince 1983 (with the release of the Famicom gaming system in Japan), Nintendo has proven to be a gaming company dedicated to finding what gamers want, even when the gamers don't know it themselves. From dual-screen systems, to motion controls, to convertible home console/portable consoles, Nintendo regularly proves that the weirdest innovation is exactly what the gaming community needs. decided that the Super Mario SeriesHe's the world's most famous plumber and the biggest face in Nintendo's stable, a character so ubiquitous you already knew we were talking about Mario even before we said his name. needed gimmicks. It's wasn't good enough for the fancy red plumber (and his green-suited brother) to just run and jump their way to glory through multiple games, now they had to have a "hook" to get people to play. Mario couldn't just run and collect stars, now he needed a water gun. Luigi couldn't get his own platforming adventure, he had to chase ghosts with a magical vacuum. It feels like Super Mario 64, their first true foray into 3D game play for the red hatted hero (and a wildly successful one) also broke what made Nintendo's series special. 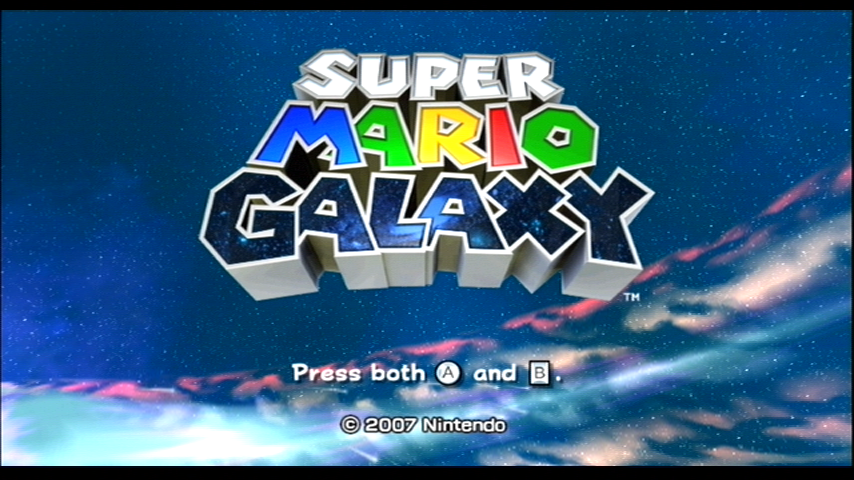 Although in some ways Super Mario Galaxy was a return to form for the plucky plumber (after the really weird and not all that fun Super Mario Sunshine) it also still seemed to be grasping at what made the Nintendo 64 adventure so special. Mario could just be Mario, he couldn't just go from zone to zone collecting stars and having fun platforming adventures. No, he had to have something that made his adventure stand out. For Galaxy that was little planetoids.

I'll be honest with you, Super Mario Galaxy doesn't rate very high on my list of favorite Mario games, something that has to seem like blasphemy for the Mario faithful. I know this game has its rabid fans (enough of them to warrant a direct sequel, Super Mario Galaxy 2), but for me there's still something missing to this title, something to make is special in comparison to the Nintendo 64 title. This game isn't Super Mario 64 but in all the ways it deviates from that game it desperately feels like it's struggling to out do it... without ever really nailing the mark.

Before we get to the things that didn't work for me with this title, let's go over what does work. For starters, this game does have more of the feel of classic Mario gaming than Sunshine. Gone is that weird water-pack, replaced by nothing more than a selection of power-ups and a lot of worlds to explore. Nintendo seems to have listened to the complaints of fans about how weird the water gun was (or they simply didn't want to follow up on it again), but thankfully FLUDD and his dumb, gimmicky game play is gone. This is a more traditional Mario game in its layouts and base mechanics. Run, jump, jump some more, and occasionally shoot between planetoids to find new areas to explore.

Okay, that last bit is not traditional game play but it does feel very natural. The new feature of Super Mario Galaxy is that each of it's zones (a la sections of Delfino Isle in Sunshine, or the magical paintings in 64) lead to a zone of space filled with big, round planets to explore. In those planetary zones you'd find a number of stars and collecting those stars allows Mario to unlock more zones in the game, and on and on. The setup should feel familiar, but the types of zones do at least add a nice, dynamic quality to the exploration. You're not bound to a simple square of land (as each of the zones in the previous games effectively amounted to) but a whole area filled with planetoids and asteroids to run around on. 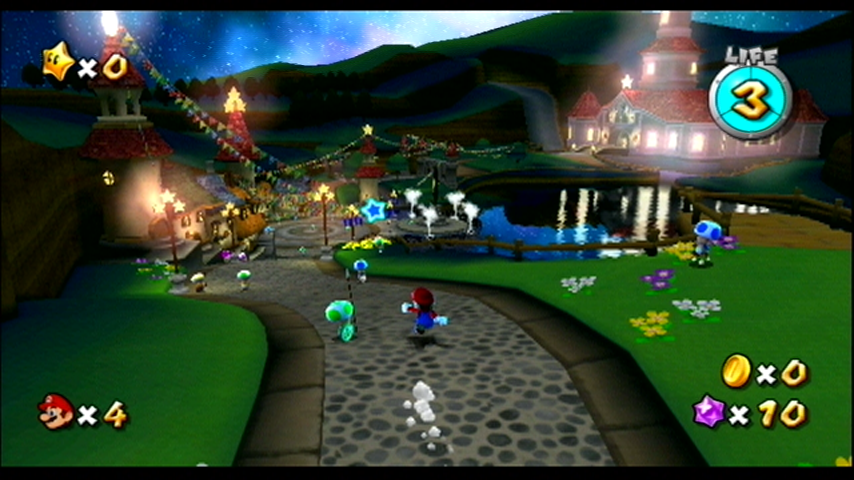 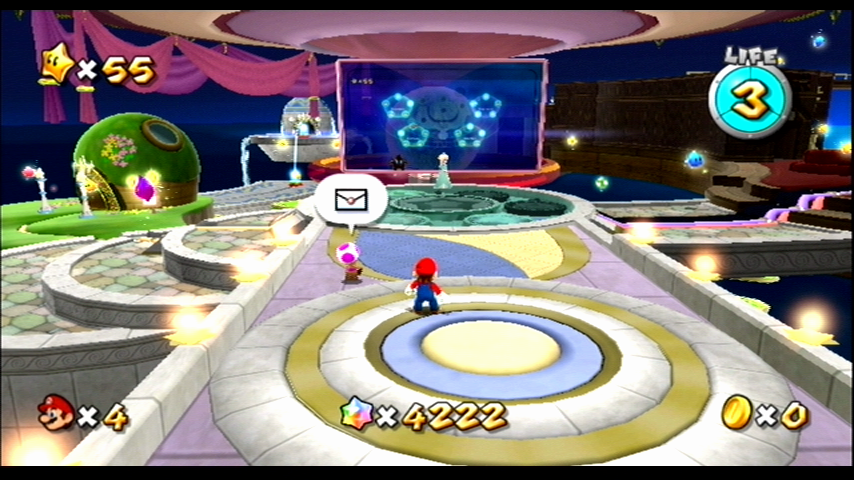 That's the good part. The bad part is that, even with all these new, wide open areas to explore, the formula of the game is starting to feel rather stale. It's still just a collection of zones with a certain number of stars in each to collect (some obvious, some secret), and once you get the pattern down of how the zones break up their stars it becomes pretty obvious what you have to do and how you're going to do it. Sure, there are some interesting power-ups to break up the standard play (the Bee costume was a favorite of mine), but it still feels like the same type of game that we had back with Super Mario 64, simply dressed up with better graphics.

Don't get me wrong, they are very pretty graphics. Nintendo always put their best work into their own games, and while the Nintendo 64 was very much a stop-gap system one meant to drag the future of gaming into 3D with chunky graphics and all, the systems since then have added on the needed Nintendo polish to really make their games sing. While the Wii might have been deemed "just a GameCube 1.5", it could crank out some nice graphics in the right hands, and Nintendo certainly had the right hands for the job.

Meanwhile, the things that make it specifically a Wii game (i.e., motion controls) really don't add much to the game. Yes, there are moments of waggle, times where you have the shake or rotate. Hell, there's an entire co-op mode where the second player can collect star bits and grab enemies to keep them still. It's interesting, but not revolutionary, and at a certain point you basically just ignore anything the system adds into the game. it's there, but all it really goes into is another 3D Mario game.

The biggest issue I had with the game was tat it didn't really seem to trust me to play it my own way. The thing I love about Super Mario 64 is that so many of the levels are just open to you. You can do what you want in each of the worlds, collecting the stars in whatever order suits your fancy, and the game (for the most part) just gets out of your way. Too many times in Galaxy, though, the game had a prescribed order I had to do things. Go to this planet to do these tasks first. Then you get to unlock this star over here, and then you can do this other things the other way. I couldn't just play, I had to play Nintendo's way. 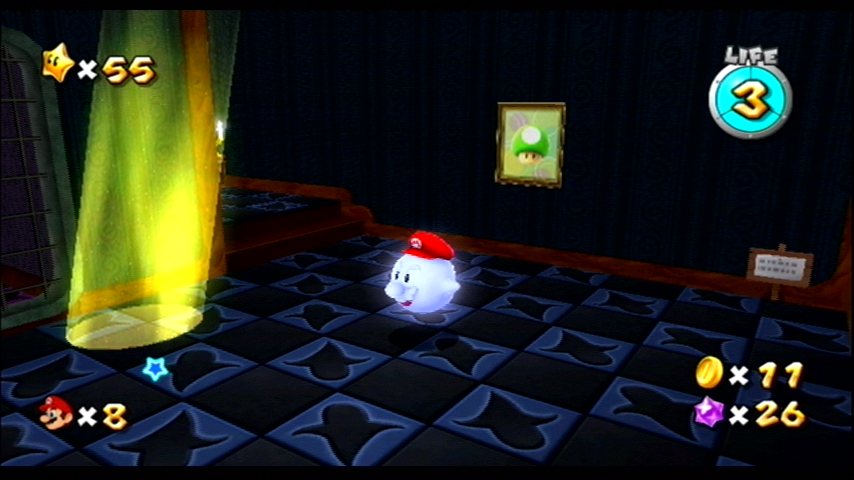 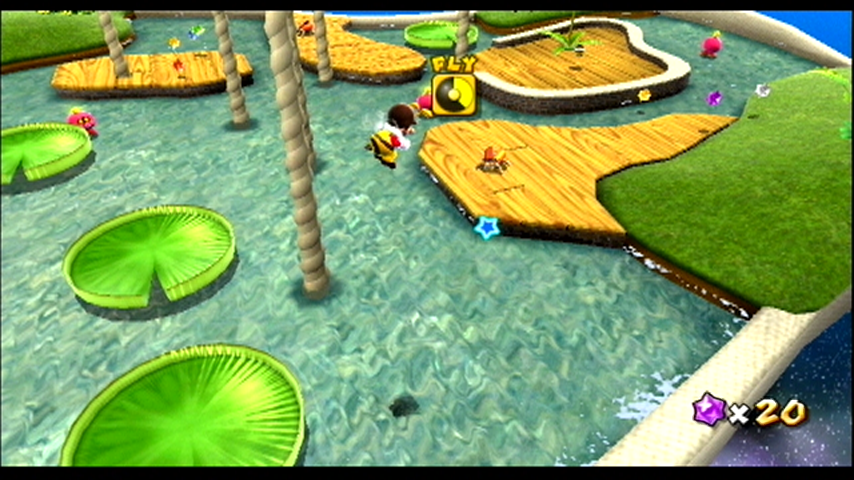 The game is good for what it is, but what it is was just another Mario game. I wanted just another Mario game when Sunshine came out, but that desire had passed in the years since. I got just enough of a fix from that sequel that I needed more. I need special and different and enough to really keep me hooked. While I felt like I got my money's worth out of Galaxy it never hooked me to the point where I just had to play it, exploring every nook and cranny. I had my fun, and then I was done, on to whatever game was next in my pile. I played Super Mario 64 religiously, over and over. I play Galaxy until I'd seen what I wanted to see. It's a big difference.

I do get why the game has fans and I'm not denigrating all that the game does well. If all you wanted was another 3D Mario title, Super Mario Galaxy provided. But 11 years of waiting left me wanting when this was as much as Nintendo could muster for me. It would be a while before the company finally delivered a Mario experience that really, truly hooked me again.