Two Plumbers for the Price of One 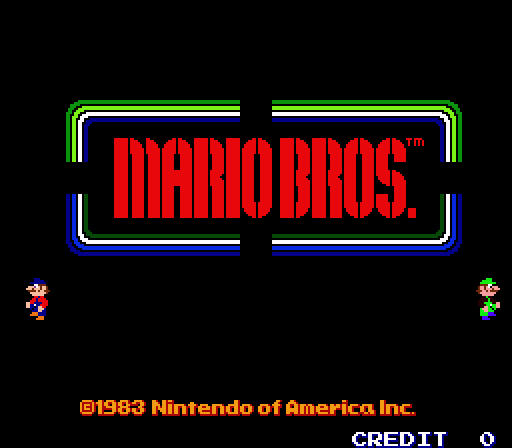 The curious thing is that, in point of fact, Nintendo decided to spin each of their hit characters off into their own games, kind of like they were trying to see what would stick. Donkey Kong would go on to star in another video game as the villain of Donkey Kong 3, but Mario would get his own, separate game featuring a new play style, new enemies to fight, and a brother to help him out. Mario Bros. was the next game for our erstwhile "Jumpman", and it would lay the groundwork for his adventures sure to come.

Considering where Mario would go in his next game, Super Mario Bros., this game honestly feels like a moderate, even mediocre, step from Donkey Kong and the adventure to come. Unlike the sprawling stages of SMB, Mario Bros. hews quite closely to the Nintendo arcade game formula of the era. Each "stage" is a single screen, all of them with the same basic layout: three tiers of platforms with pipes at the top and bottom, creating a constant path for the enemies to follow; enemies come out of the top pipes, walk along the tiers down and down, until they enter a pipe at the bottom whereupon they're transported back to the top to start their march again.

The goal of these stages is to kill all the enemies. To do so Mario (and his newly introduced brother Luigi if you're playing two-player) don't jump on the enemies, not immediately. First the enemies have to be upended, which requires the bros to jump into the platform under an enemy, causing the platform to curl up for a moment, flipping the enemy over. Now in a prone state the enemy can be killed by the bro running (or jumping) into them. But be careful, enemies will only stay prone for so long before they flip over and get more aggressive. And don't hit the platform under them again because you'll jump flip them back and make them mad.

Mario Bros. is, in fact, quite a simple game. Each stage plays out the same way (unless you're in one of the bonus rounds where your whole goal is just to collect coins on screen and get points) and after the first screen or two you've basically seen all the game has to offer. Yes, it does start introducing harder enemies -- crabs that take more than one hit to flip over, flies that jump instead of walk, meaning you have to aim your attacks for when they're on the ground -- but overall the basics of the game don't change. In this regard it's even simpler than Donkey Kong, and Junior, as at least those games had four stages instead of, effectively, one. 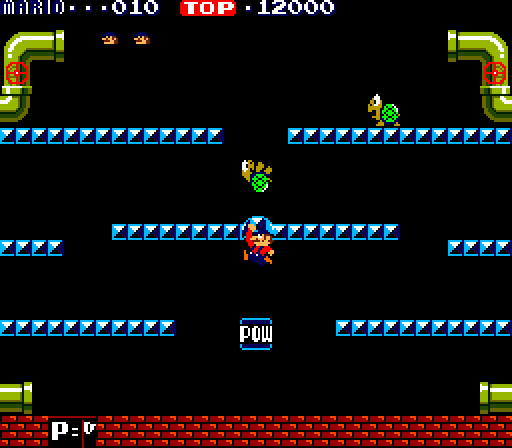 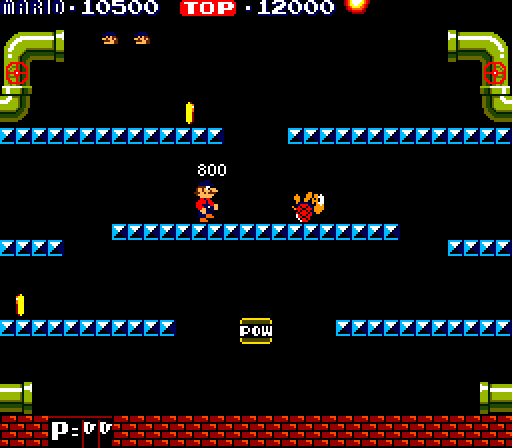 It's easy to see why, in comparison to the breakout smash that was Donkey Kong, this original Mario Bros. was only a moderate success. Yes, it was a different game from the two titles that came before, and it clearly shows Nintendo working on new ideas, but the basic game is so simple (in regards to the fact that everything about the game is witnessed on the first stage) that it could hardly keep people engaged for anywhere near the same amount of time as Donkey Kong; that game had stages to explore and a story to tell, but Mario Bros. was just the same thing over and over again.

No, it's in what this game added to the burgeoning series to come that really sets this title's legacy. This is the first game, of course, to introduce Luigi, the erstwhile brother and constant second-banana to Mario. In fact, this is the first co-op Mario title in the whole series (something that wasn't attempted again until the New Super Mario Bros. portion of the series). Luigi was a great introduction for the series, but just having a way for two players to compete added so much to the series.

As far as world building, we also have a number of cool additions. Koopas first appear here, marking the earliest appearance of that series mainstay. The crabs and flies that show up having really appeared much since, although the flies to resemble once that would show up again in Super Mario Land. After you kill an enemy a coin will roll out of a pipe, also marking the first time Mario's famous currency would appear. And, of course, there's the pipes, another mainstay the series has used ever since. Heck, this is the first time a pipe has shown up, clearly marking Mario as a plumber of some kind, a job title he's kept ever since.

All of these elements appear here but are much better put to use, of course, in Super Mario Bros. two years later (in Japan, as it'd be four years after the arcade release of Mario Bros. before we saw its NES sequel). For a bit of trivia, and to see where everything started to come into form for the series, Mario Bros. is a worthy bit of history. But as an actual game it really doesn't hold up. It's basic routine doesn't change overly much from stage to stage, the game just gets somewhat harder over time until you finally run out of lives. It's a very formulaic and basic game made notable mostly because it has Mario and helped to foment the platformers to come. 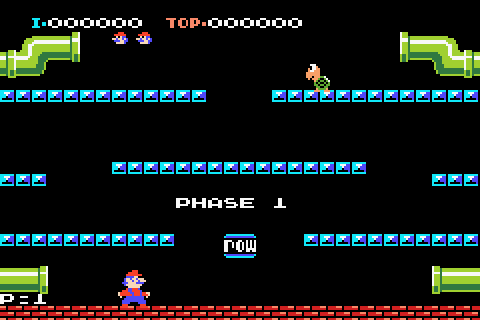 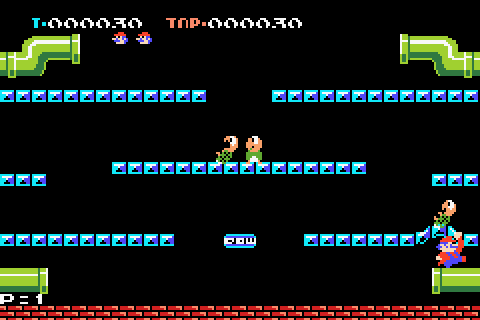 And yet Nintendo has had a lot of love for this title over the years. For a whole there the game was remade and included in any number of Mario titles. First showing up as a bonus versus mode for two players in Super Mario Bros. 3, before appearing in every Super Mario Advance port the company made. It saw ports to all the classic systems, from Atari to Caleco and of course the NES. There was a Famicom disc enhanced remake called Kaette Kita Mario Bros. which featured a few improvements and refinements (but is nearly impossible to get due to the low numbers of discs of the game that were made). Hell, Hudson made a couple of enhanced remakes for Japanese PCs, neither of which were remarkable. And then, of course, Nintendo included the game, titled Super Luigi Bros., as a bonus in Super Mario 3D World, unlockable if you had New Super Luigi U content on your hard drive.

Certainly the most extensive port/remake of the game, though, was the Virtual Boy version of the game, Mario Clash, which featured 3D levels and new mechanics, like hitting the enemies off the stages by lateral attacks with the enemy shells. It's an odd game, for sure, and hard to play at this point unless you're one of the lucky few to get a Virtual Boy in the few months they were on shelves (or from second-hand markets after).

It amazing the long tail this game has had considering its only a ho-hum game. But it's an artifact of Nintendo's early days before the NES took off and their fortunes expanded on the back of Super Mario Bros.. This first Mario Bros. might not be much of a game now, with modern sensibilities, but we wouldn't have all the big Mario titles without this one to set everything up for the series.