When it came to console games in the mid-1990s, there were few names bigger than NintendoSince 1983 (with the release of the Famicom gaming system in Japan), Nintendo has proven to be a gaming company dedicated to finding what gamers want, even when the gamers don't know it themselves. From dual-screen systems, to motion controls, to convertible home console/portable consoles, Nintendo regularly proves that the weirdest innovation is exactly what the gaming community needs. and Square (now Square-EnixFormed from the unification of Squaresoft (home studio of Final Fantasy) and Enix (creators of Dragon Quest) this combined company is the largest game studios in the world. From action to adventure titles and, of course, JRPGs, Square Enix has become one of the biggest names in gaming.). Nintendo had just come off of an incredible, decade-plus run between the Nintendo Entertainment System and its successor, the Super Nintendo Entertainment System (when a name works, you just go with it). Square, meanwhile, was the name in console RPGs, and nothing could come close to their Final Fantasy series. Sure, Sega was a solid contender to Nintendo at the time, and Enix was a big rival to Square on the international stage (part of the reason they eventually merged together), but for a time it was the N and the S on Nintendo's consoles. 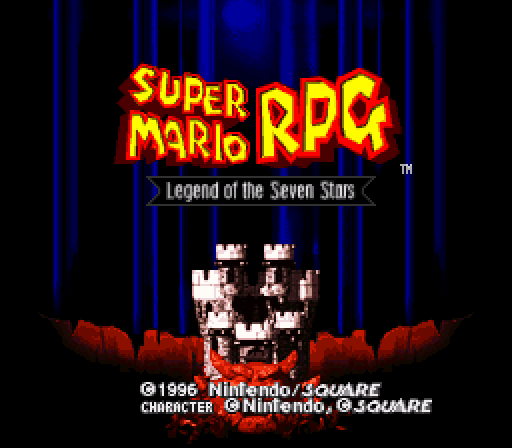 That was part of what made Super Mario RPG: The Legend of the Seven Stars so special: it was two of the biggest names in the console space teaming up to do what they did best, all at once. On the Nintendo side you had Super Mario SeriesHe's the world's most famous plumber and the biggest face in Nintendo's stable, a character so ubiquitous you already knew we were talking about Mario even before we said his name.: his characters, his world, and the strange sense of humor that, even then permeated his games (although, arguably, it's the RPGs that really pushed that forward). On Square's side you had their prowess making RPGs applied to a new game that didn't have to directly match expectations from anything they'd made before. Both sides could collaborate and create something wholly new, but very comforting, all while providing one of the best RPG experiences on a Nintendo console. Quite frankly, it worked like gangbusters.

I am an unabashed Chrono Trigger fan, holding it aloft as the best RPG Square ever made (and one of the best games ever). I have to say, though, that if Chrono Trigger never existed, Super Mario RPG would easily take the title of Best SNES RPG (and perhaps one of the best in general). It's just such a tightly made, enjoyable game that, even now, it's easy to go back and enjoy all of its delightful moments.

The game opens with Mario heading to Bowser's castle after the evil dino-turtle has, once again, kidnapped Princess Peach. Mario's attack on Castle Bowser, though, is cut short when a giant sword plunges into the castle, sending Mario, Bowser, and Peach flying off in different directions. The sword is the great inter-dimensional ship (and workshop) of the evil Smithy and he has plans for world domination (you know, that thing that Bowser keeps trying, and failing, to pull off all thanks to Mario).

Discovering that the way back into the castle is blocked, Mario sets off on an adventure around the Mushroom Kingdom (and beyond) to gain access back to the castle. Along the way he teams up with Mallow (a magical cloud-person), Geno (a doll given live by the power of the Star Road), Bowser, and then Peach, who each bring their own abilities into combat. They fight the goons from the Smithy Gang (along with many other foes), collecting the seven legendary stars along the way, all to give them that necessary path back into the castle to take on Smith and save the kingdom. 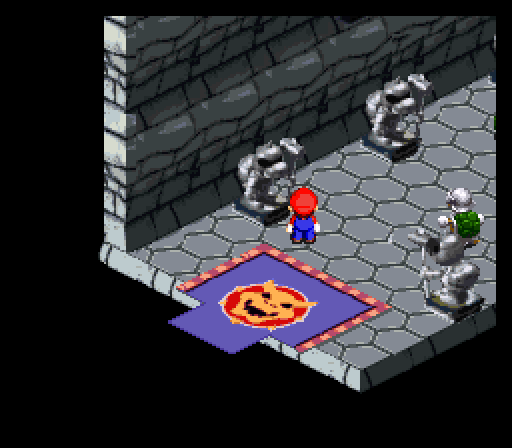 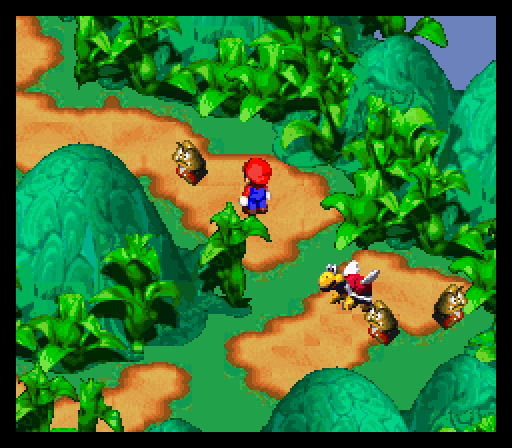 Coming out one year after Chrono Trigger, this game feels like another natural evolution of what Square had been cooking up in their games. Enemies can be seen on screen, and touching them will cause an in-scene battle to occur. There are no random battles, although some areas can be clogged with enemies to fight (or avoid). In battle, the player has three characters to work with (although Mario is always forced), and they're treated to isometric, turn-based fights that will feel pretty familiar to anyone that has played an RPG. The menus might look different, but the scenes will still be familiar.

At the same time, though, you get a sense that Nintendo wanted their hero treated right, and that comes out in a number of ways. Combat, for example, is a very active affair. Mario does platforming action, so instead of just leaving the RPG combat as point, click, and wait, now you can time extra button presses to increase the power of your attacks. You can also press buttons at the right moments to lessen (or avoid) attacks from foes. The right buttons at the right time really can turn the tide of combat (and speed-runs of this game can feel quite hectic).

Outside of combat, too, there is plenty of Mario in this Mario game. Naturally mushrooms and flowers are a big part of the game (one acts as healing, the other is your magic power). But the areas themselves are setup for a lot of platforming. There are coins to collect, and secret chests to find by jumping. Oh, there is so much jumping in this game and platforming around -- jumping, climbing, and falling -- is a big part of the exploration. Maps aren't simple fixed affairs but are complex and enjoyable, making it a delight to explore.

Everything in the world, from the battles to the areas, are shown from an isometric angle. This was done, I'm sure, to both make the platforming a little easier to see while also highlighting the rendered 3D graphics of the game. Much like with Donkey Kong Country and the later Rare titles in that series, Super Mario RPG uses pre-rendered 3D graphics transported into the game was sprites. Everything had a rich 3D look to it (for the SNES, at any rate), and it makes this game look quite distinctive, not only from other Mario games but the Square RPGs of the era as well. 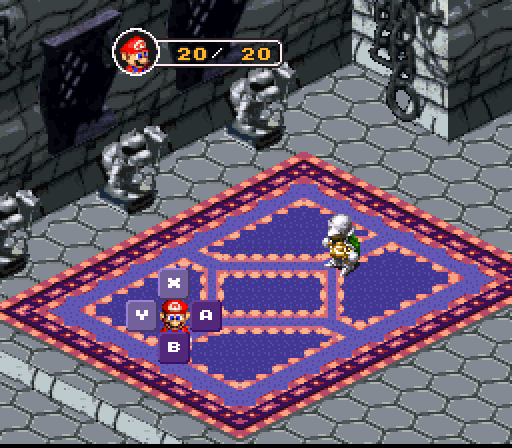 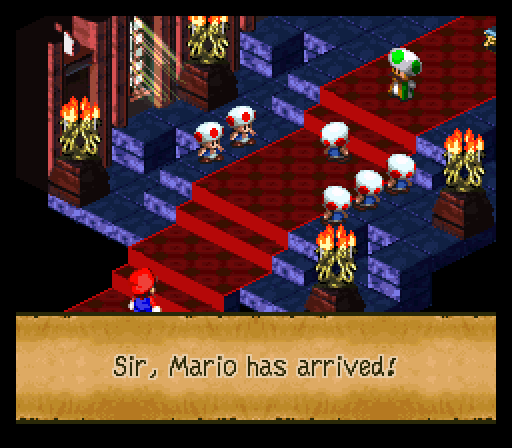 All that being said, the graphics aren't without their drawbacks. While the isometric angle does make the platforming a tad easier to see than if it was a straight on, top-down angle, there are plenty of jumps the game expects you to make (at least to get secrets) that are an absolute pain to do in the isometric style. And while the graphics were lovely at the time, they are slowly starting to show their age, looking a little too pixelated, maybe a touch too blurry when it came to details. It's still distinctive looking, but maybe not as nice as it once was.

And yet, the game is still a delight. Going back and experiencing it again years after the last time I played it I was reminded of all the fun little details in the game. It plays smooth as silk, but has a ton to do, to explore, and to play through, this game is just fun, though and through, and it showed the power of collaboration. Nintendo and Square achieved something great here, a funny and delightful RPG with some solid mechanics that, at the same time, doesn't take itself too seriously. Coming near the end of the SNES's big run, this was the RPG the system needed to send it out with a bang.

If there's anything truly bittersweet about the title, it's simply that we never got a proper sequel to the game. Square and Nintendo went their separate ways after this, which Square tiring of the limitations of cartridges while Nintendo made the cart-based Nintendo 64. This sent Square into the arms of Sony, who they really have never left (at least, not for their big titles). All of the characters and new ideas introduced in this game were linked to Square and Nintendo couldn't use them again (not without Square's involvement). Thus, no Mallow and now Geno (among others) in any later Nintendo games.

Nintendo did make further RPGs -- both the Paper Mario and Mario and Luigi franchises -- but those don't have the same feel as this SNES classic; some mechanics carried over, and the humor of the series continued to grow, but they do stand apart from this title. So many have dreamed of a true sequel to this game, but considering Nintendo is doing just fine with their own spin on the formula, it's doubtful they'd want to draw Square back for another attempt. This makes Super Mario RPG: Legend of the Seven Stars a one-off special, a delight in its own right that was never truly replicated. It's a classic, and one worth playing even now, just don't expect anything to come after to feel the same or to have the same charms.