The Rise of Jumpman

It's interesting to look at where gaming is at now and go all the way back to when it originated, to see the evolution of form and function. Often it leads to a cringe as you sit there saying, "people actually played this?" I have that feeling every time I look at Pong, a game that was revolutionary when it came out, allowing people to plug a device into their TV to play video table tennis, but now seems hopeless outdated and horribly boring. 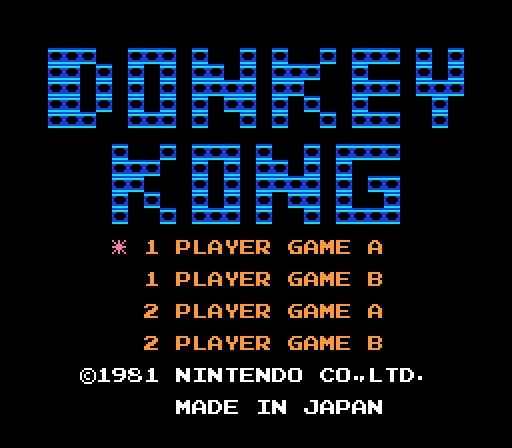 Sometimes, though, a game was released back in the day that still stands as a fun and inventive idea, one that's worth revisiting again and again even though video games have evolved and "moved on". Donkey Kong was a revolutionary title when it came out, a game that would lead to the formation of not only one of the greatest series of all time, that of Super Mario (and all its spin-offs) but also turning a card game and toy maker, Nintendo, into one of the juggernauts of video gaming.

There are countless historical essays about the formation of Donkey Kong and the rise of Nintendo -- I'm not going to focus on that here, but if that interests you there's a great gaming historian on YouTube, Jeremy Parish, who goes in depth on the creation of Nintendo's video game aspirations and their legacy as a video game maker -- so instead let's actually focus on the game itself. And, for the era, it's hard to think of Donkey Kong as anything less than revolutionary. It is, in its way, as big a jump over the platforming games to come before as Super Mario Bros. would be over this game a few years later.

There were games that helped to launch the idea of a platforming game -- Space Panic, Crazy Climber -- but these games were limited in scope and ability. Most arcade games of the era were rail shooters or maze exploration games (think Space Invaders or Pac-Man). What Donkey Kong did was to take the nascent ideas of platforming and craft them into a complete package that essentially launched a genre.

In Donkey Kong, our currently unnamed hero (who would go on to become Mario) is chasing after a giant ape, Donkey Kong, who has kidnapped Mario's lady-love, Pauline, and taken her to the top of a construction site. Through four levels of walking and jumping (running wasn't part of Mario's move-set yet) Mario would have to climb the construction site, avoiding obstacles like rolling barrels and various enemies, all to reach the top platform of the single-screen level and reunite with his girl... who would then get picked up by DK and taken to the next stage. Complete all four stages and the game would loop, a little harder each time as you progressed up and up. 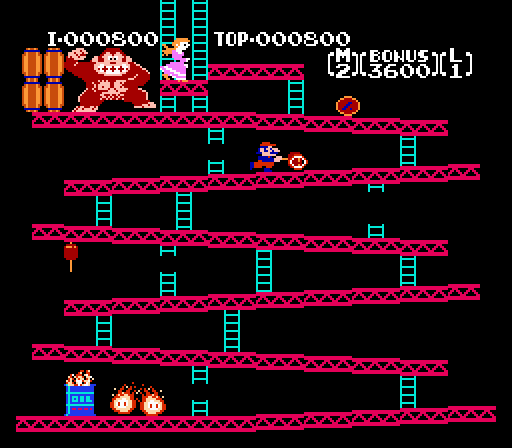 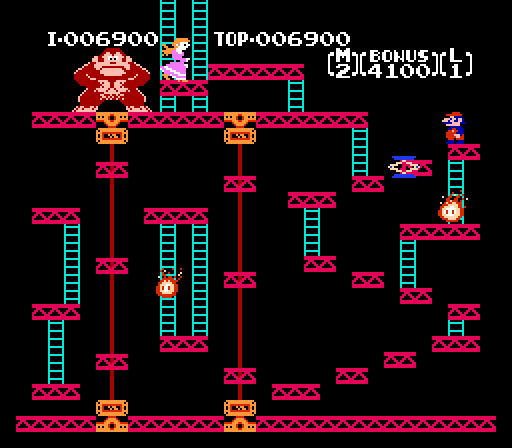 As one of the formative titles for the entire genre, Donkey Kong is not without its flaws. In comparison to how maneuverable Mario is today, his original form (as "Jumpman") was very limited. His jumping was too shallow, too precise, meaning you had to know exactly how to time your jumps, and execute them exactly, to be able to jump over obstacles. A single pixel wrong, a single mistimed frame, could be the difference between life or death for Mario. The game, as an arcade title meant to strip you of your quarters, was unforgiving.

And yet, at the same time, there's something satisfying about Donkey Kong. The game, even in its first round of four stages, is satisfying when completed. You have this sense of accomplishment, a rush of adrenaline and relief, when you reach that top platform and get a little heart of love from Pauline. You managed to get through this obstacle course, despite the intentions of the game and its randomness that feels entirely out to get you. The game was brutal but consistent so if you failed it was your fault, but if you succeeded it was entirely your accomplishment.

Additionally, the game looked different from what came before. Whereas most arcade titles presented the same scenario over and over again -- the same kind of mazes, the same approaching horde of aliens -- Donkey Kong had variety, with four distinct stages -- the initial climb up the girders, the screen with the cycling platforms and a lot of open space, the cement factory, and finally the half-constructed pinnacle -- that presented a variety of challenges to master and designs to explore. Having this much variety was a novelty at the time, and really pushed that sense of exploration. As the game challenged you, asking "how high can you get?", arcade players were sucked in trying to see what new challenge would await them on each successive screen.

The game, too, was bright and cheerful, with a lot of innovative touches. DK was huge, a larger sprite than was traditionally found in arcade games of the era, and though interaction with him was low -- he'd only really throw barrels at the player in the first stage, and then move around a bit in the cement factory -- he was still large and bright. The entire game was populated with clean (if simple) graphics and cheerful design, fitting very much into the evolving house style of Nintendo. Heck, the game even had a bit of a soundtrack, playing a little ditty as Mario, err, I mean Jumpman moved around. None of it was complex, but for the era it was unlike anything else available. 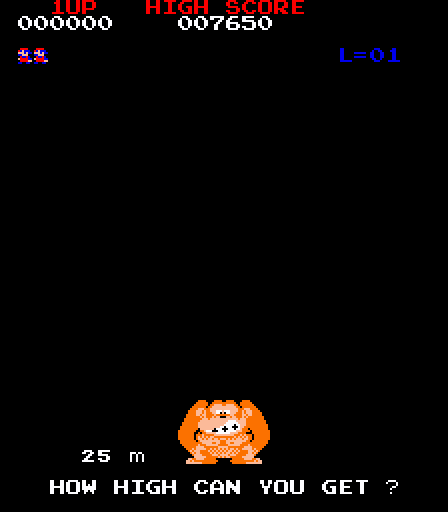 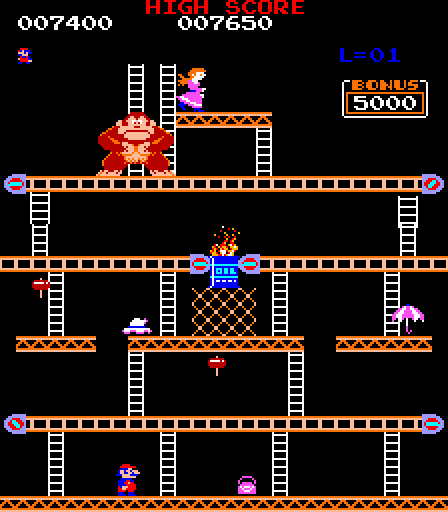 In short, Donkey Kong was a sea-change moment for arcades. Before then every game company (Nintendo included) wanted to make their own Space Invaders or their own Pac-Man. But after Donkey Kong every other company looks to see what kind of platforming game they could craft (such as Pitfall and Pac-Land). The entire ground of what video games could do shifted with Donkey Kong's first jump onto the girders, setting the stage for his own game, and it would never be the same after... especially once Nintendo took their ambitions from this one game and crafted an entire media empire out of it.

The popularity of Donkey Kong lived on for a long time, with ports of the game appearing on the ColecoVision (which only featured three of the four stages, missing the cement factory, and had simplified versions of the levels), Atari 2600 (which only had the first and last levels and looked like hot garbage), Atari 7800 (which looked better but still had Atari's awful sound effects, but did restore the second stage of the game albeit missing the cement factory still), and various Atari computers (which had all the stages, but a bad mix of compromised sound and graphics). And that's not counting the Coleco tabletop version of the game (a cruddy little LCD-style game) or Nintendo's own Game & Watch LCD games, which broke the game into Donkey Kong and Donkey Kong II to port out recreations of all the stages.

For a long time the most faithful port of the game was Nintendo's own port to the Famicom (and later NES), although even here, due to limitations of the cartridge's storage capacity, parts of the game were removed. The various animatics were ditched, along with once again the cement factory stage. A complete package of the Donkey Kong experience wouldn't be seen until Donkey Kong '94, a remake/expanded sequel that opened with a recreation of the original game (albeit once again with smaller versions of the stages, like in the Caleco port) that then expanded into an addition 100-ish stages for Mario to explore.

The only truly faithful port of the original would happen later, as an e-Shop exclusive from Nintendo. This edition, Donkey Kong: Original Edition expanded the NES port to include not only all four stages but also restored many of the animatics that were removed from the arcade game for all the various home ports. This is certainly the best and most fully realized version of the game, loving crafted to match the original version as best as it could be, but it just not that well known considering it never received the kind of wide release it deserved back in the day.

The argument could be made, in fact, that Donkey Kong was much more formative for Japanese gamers than it was for American audiences. While arcades across the world got to experience Donkey Kong, and it became a hit in the East and the West, on home consoles the life-cycle of the game was very different in the two regions. It was one of the originating titles in the Famicom library in Japan, along with its sequel Donkey Kong Jr., and that home console was explicitly designed to run Donkey Kong as accurately as possible. For home audiences in Japan, then, Donkey Kong was synonymous with the Famicom.

But by the time the console came out in the West two years later (redesigned and re-branded as the NES) there was already a newer and brighter title on the horizon: Super Mario Bros.. Within a year of the console's release here Super Mario came out and blew Donkey Kong, its sequels, and even Super Mario's own prequel Mario Bros. out of the water. The NES as a different formative game in the U.S., relegating Donkey Kong to the status of prequel curiosity and not the evolutionary game it was otherwise.

Still, going back and looking at Donkey Kong, it's amazing how well the game holds up. Mario isn't as easy to maneuver here as he would be in his later games, and the title is limited in scope and style in comparison to what the NES could eventually accomplish, but it has a fun pace and decent gaming beats that make for an enjoyable diversion. Taken outside the context of the arcade, where you aren't desperate to keep playing on a single quarter, some of the impetus to play through the four screens over and over is lost, so it's doubtful anyone will spend the same amount of time churning on the game now as they would back in the day (unless they're playing for a scoring world record), but as a point in history, a moment when gaming evolved, Donkey Kong manages to hold up reasonably well. It started an entire franchise, dominated arcades, and launched a company, all while pumping out a fun little ditty as its hero moved. Not bad at all.