Over the course of its life the NES saw three Super Mario adventures (four, if you count Super Mario Bros. 2 USA as well), which, along with all the classic arcade games that were ported to the console early in its life, meant there were eight Mario-centric adventures on that one console (not counting all his random appearances in other games as well). As far as the NES was concerned, Super Mario SeriesHe's the world's most famous plumber and the biggest face in Nintendo's stable, a character so ubiquitous you already knew we were talking about Mario even before we said his name. was NintendoSince 1983 (with the release of the Famicom gaming system in Japan), Nintendo has proven to be a gaming company dedicated to finding what gamers want, even when the gamers don't know it themselves. From dual-screen systems, to motion controls, to convertible home console/portable consoles, Nintendo regularly proves that the weirdest innovation is exactly what the gaming community needs.. 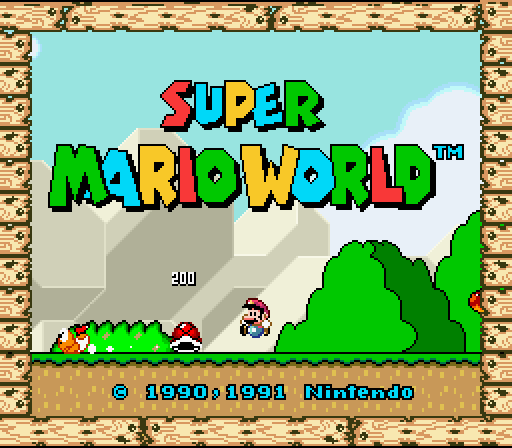 When it came time for the Super Nintendo Entertainment System to come out the expectation was that it, too, would have its own Super Mario title. Hell, even the Game Boy had seen its own exclusive title in the series, Super Mario Land, so the SNES needed one as well to be its "killer app". And, sure enough, a fourth mainline Mario title was announced: Super Mario World (which, if you were in Japan, was subtitled "Super Mario Bros. 4"). The game promised to bring in everything Super Mario Bros. 3 had delivered and then some. And, I'd argue, it mostly does just that.

If you compare SMW against SMB3 it certainly feels more evolutionary than revolutionary, an incremental upgrade for the series that does add new ideas but doesn't really push as many boundaries as you might expect. It's now the giant leap forward for the series that the third game was over Super Mario Bros. and The Lost Levels. It's biggest "innovation" was cleaner graphics and more colors which, yes, those were important since this was a "next-gen" for the time game, but when it came to the game play, this was Mario is a similar bag of tricks, doing his thing.

I don't want to make it sound like I hate this game because I really don't -- back in the day I played this game over and over for months after it came out, literally lugging it around on a trip with my parents along with a tiny portable television so I could play it wherever we went (I also had a Game Boy but I preferred this, much to the consternation of my parents). It's just that, with the hindsight of time, I have to admit that this game doesn't add that much new to the SMB3 formula. Those players looking for something really new would have to wait for this game's sequel, Yoshi's Island or the absolutely revolutionary Super Mario 64 years later.

Of course, for fans of the series this game delivers exactly what they were looking for. The adventure opens on Dinosaur Island with Mario (and Luigi, with a second player) once again chasing after Bowser after the king of the koopas has kidnapped Princess Peach and taken her to his newly built castle at the center of the island complex. The two plumbers will have to run, jump, and fly their way across the multiples stages (with up to 96 exits), battling Bowser's Koopa Kids, all before taking on the king and saving the day. It's the same story we've had for three (of the four) previous Mario games in the main series and this title doesn't stray far from the formula that works. It's just what the fans at the time wanted, of course, as all that was really needed to be a success was "more Super Mario Bros. 3". 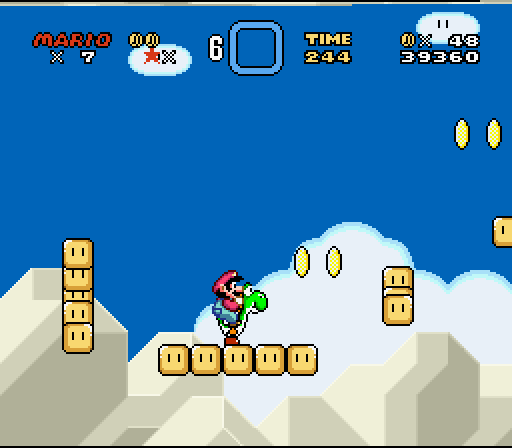 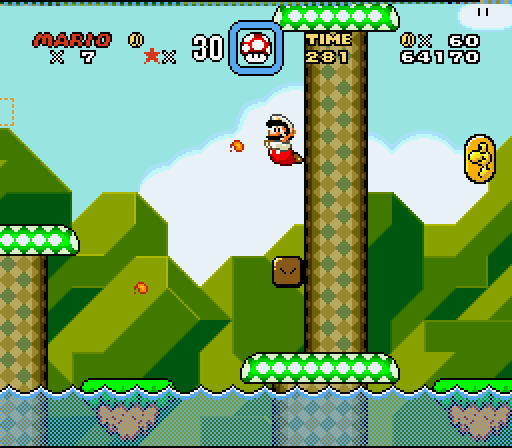 As far as basic mechanics are concerned, this game plays well within the basics of the series as perfectly defined by SMB3. The big innovations in the game come from two items: the Cape Feather and Yoshi. The cape is the less innovative item, honestly, because Mario had already gotten flight in a previous game from the raccoon tail (which could be upgraded as either the Tanooki Suit or with a P-Wing). Sure, now Mario could fly across an entire stage (if the player knew what they were doing), but flight is flight, really.

No, it's Yoshi that adds a new mechanic to the whole proceeding. This was a character that was meant to be included in Super Mario Bros. 3, was even designed and coded at one point to fit into the game before the dinosaur was scrapped (although romhacks have managed to restore the dino), and it's not hard to see why the creators so wanted to include him as soon as he can: he changes the basic way Mario plays. When Mario rides a Yoshi he gets an extra hit -- being hit while on a Yoshi causes Mario to jump off, but then he can run to catch up and get back in. Yoshi is basically invincible, something Mario has never really had on his side before, and that coupled with the fact that Yoshi can eat enemies (of just about any size) and can carry items in his mouth makes Yoshi essential to most play-throughs (especially if you're playing casually).

The rest of the game, though, is more or less what you expect from Mario. Like with the previous title there's an overworld map and the heroes will venture from one level to the next, beating those stages to unlock their next path through. This game does feature a few more hidden secrets than the previous game, and a little more reliance on branching paths, but it's not anything outside the expectations for the series at this point. It's Mario, done well and updated for the 16-bit era.

From one perspective this is exactly what Nintendo was expected to deliver. The basics of this game were set all the way back in the original title, from Mario's run and jump to his use of fire flowers and the basic kinds of enemies that would appear, and hardcore fans of the series wanted exactly this. But sitting on a store shelves right besides the SNES was the new Sega Genesis and, as that company put it, "Sega could do what Nintendon't". In comparison to Sonic the Hedgehog, Mario was suddenly a little slow, a little too basic, a little too behind the curve when it came to showcasing his system. Sonic had speed and attitude but Mario hadn't changed all that much since, really, Donkey Kong. Nintendo needed more than this if it wanted to dominate with the SNES like it did with the NES. 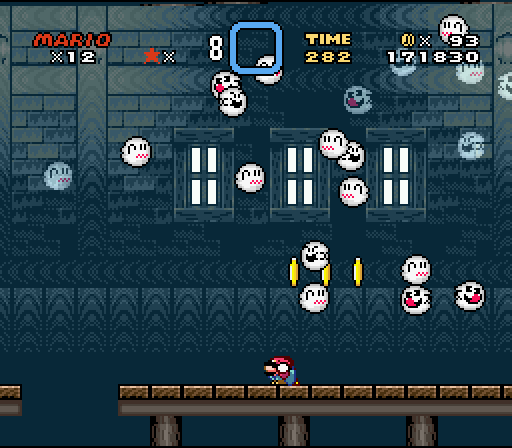 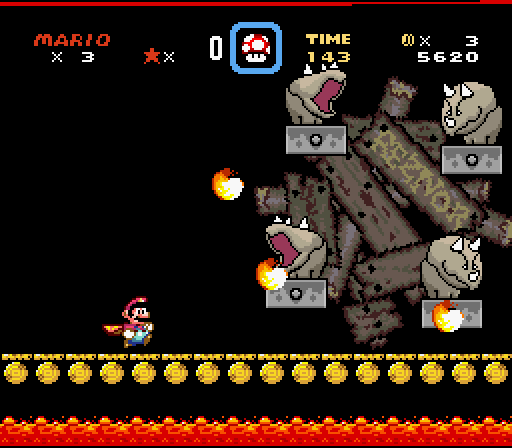 Honestly, Super Mario World was just too safe a game for the system. It perfectly showed off the kind of game Nintendo wanted to make but it was the kind of title Sonic could run circles around. It would take time for Nintendo to release the kinds of games in this series that would squash the idea that Mario was behind the curve, but by then other consoles were cropping up and Nintendo's stranglehold on the console market was already slipping. Super Mario World is a great and enjoyable game for what it is -- more Super Mario Bros. 3 but in 16-bit -- but already that just wasn't enough anymore. Mario had basically created the platforming genre but he was no longer defining it.

Nintendo has gone back and revisited the game a couple of times. The first was when it was included in a re-release of Super Mario All-Stars, the SNES compilation of all the NES Mario games. In the bigger Super Mario All-Stars + Super Mario World, all five of the plumbers main adventures were put together (with just a graphic update of Luigi being the one big change, even though it didn't actually change the game play at all). This compilation, though, actually proves my big issue with the game, though, because once you make Super Mario Bros. 3 look as good as Super Mario World you really get to see just how little Nintendo innovated this time around.

The game evolved a bit more, though, for its Game Boy Advance release: Super Mario World: Super Mario Advance 2. Here one new big mechanic was put in: Dragon Coins in every stage. In the original version of the game collecting five Dragon Coins would net Mario a 1-up but, otherwise, they meant nothing. IN this GBA iteration, though, every stage now had five Dragon Coins and collecting all 480 of the coins in the game would change the hero into Princess Peach (although she didn't play any different, reportedly). Meanwhile, Luigi saw another upgrade, now being changes to play like his higher jumping, floatier self from Super Mario Bros. 2 USA. Overall, though, this is the same basic game again, which was great, but a few minor tweaks didn't really innovate this game as much as some of us really would have liked.

Super Mario World is a solid game. I'd even go so far as to call it fantastic. It's certainly in the top of the Mario charts and I don't want anyone to think otherwise from this review. It's just, in comparison to what came before and then what came after, this game feels too safe, too cautious, too much like Nintendo just wanted to deliver their previous hit all over again. They did, but what that really enough. I don't think so, not if we're trying to be the next, best game in the series.