No Matter Who Wins, No One Cares

For a movie that was in development for such a long time, Freddy vs. Jason really wasn't worth the wait. The brain child of the Jason team, a crossover between the Friday the 13thOne of the most famous Slasher film franchises, the Friday the 13th series saw multiple twists and turn before finally settling on the formula everyone knows and loves: Jason Voorhees killing campers 'round Camp Crystal Lake. and Nightmare on Elm StreetThe brain-child of director Wes Craven, A Nightmare on Elm Street was his answer to the glut of Slasher films that were populating the multiplex. His movie featured an immortal character, Freedy, with a powerset like none other, reshaping the expectations for Slasher movies to come. franchises was desired from the moment Friday the 13th Part VII: The New Blood went into development. The crossover was stymied repeatedly, and each time another Friday the 13th would come out instead. 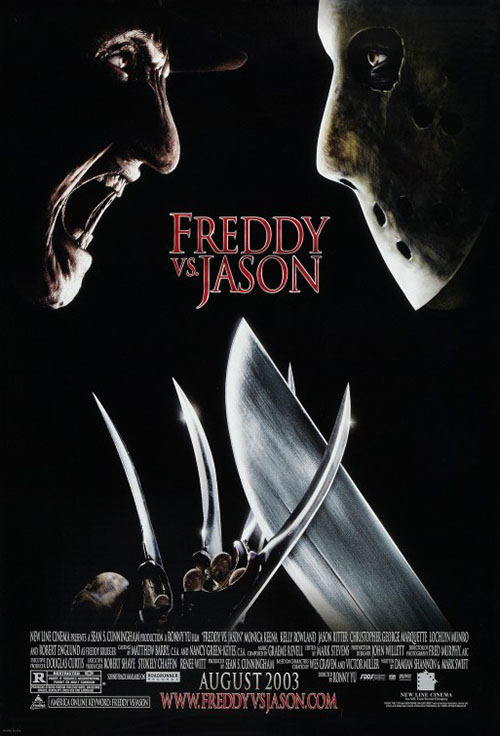 It seemed like the two would finally join up after the release of Jason Goes to Hell: The Final Friday, with Freddy's glove showing up in the last shot, dragging Jason's mask down into the dirt, but even then production was stalled, leading to Jason X getting the green light instead. And when putting your slasher killer into space is the best choice you have to keep your franchise alive, maybe it's time to let the masked murder rest for a while. Freddy vs. Jason does not change that opinion in anyway.

The movie starts promisingly enough, with Jason getting resurrected not by lightning, or human stupidity, but by Freddy. It seems that the people of whatever town Freddy originates from have figured out a way to finally keep the killer from living once more: they've purposefully wiped him from the record books making everyone forget he exists. Without belief Freddy doesn't have the power to manifest in the dreams of teenagers which means he doesn't have the ability to kill anyone (which is all he desires). So he awakens Jason and sends the hulking beast to Freddy's hometown to do a little killing and make everyone think Freddy is behind the murders. It works like a treat, steadily giving Freddy his needed juice once more, but then Jason starts killing without mercy (as Jason is wont to do), stealing kills from Freddy in the process. This leads the two to butt heads, fighting each other with a group of teenagers caught in the middle of the bloody war.

Conceptually I like the idea behind this movie's story. Using Jason to resurrect Freddy automatically justifies the inclusion of both killers in the flick and sets purposeful goals and stakes for the killers. Tying Freddy's powers to belief also neatly uses some ideas from Wes Craven's New Nightmare, giving the crossover film a sense of continuity with the mega-franchise. And, because it's set in the present (and not the future), Jason X is neatly ignored, which is always a win in my book.

The movie doesn't fail due to a lack of solid groundwork. No, the problem stems from the fact that the movie never manages to capitalize on its good, central idea. For starters, the kills are some of the most lackluster among all the films in the crossover franchise. I've groused about the fact that Jason is a pretty boring killer but you would hope that with New Line Cinema (the company behind the Nightmare series) in charge of this film, and with Freddy being included, maybe Jason could have risen to the occasion. Sadly, that's not the case. While the killer does rack up an impressive body count in a short time space (slicing up ten kids at a single party) it's all done with a staggering lack of flair and style. 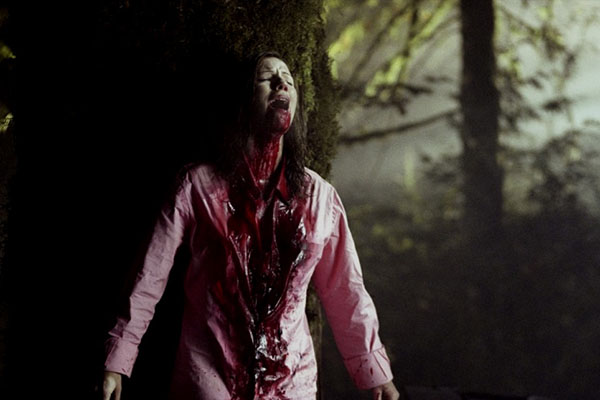 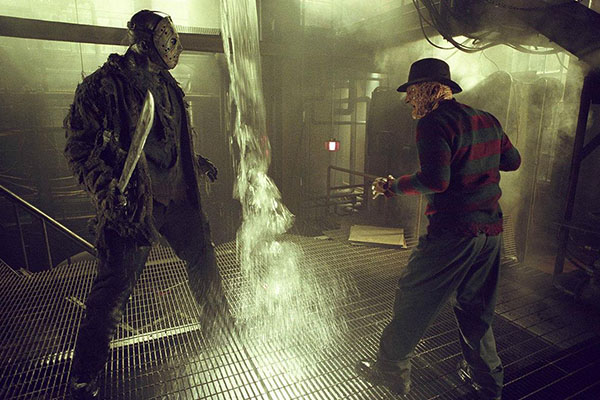 Not that Freddy fares any better in the kill department this time around, either. Normally the Dream Master is good for some creative kills; even his worst movies at least five Freddy a lot to do, no matter how silly or stupid those kills might be (like death by video game in Freddy's Dead: The Final Nightmare). Here, though, the most Freddy gets to do is haunt Jason in his dreams. The rest of the time he gets blocked by Jason. Sometimes he tortures people, or takes over their mind, but most of the kills in the movie are due to Jason.

But what's worse is the fact that Freddy isn't scary at all. I've already established that I don't find Jason to be a particularly effective monster since mostly he just magically appears behind someone and stabs them -- he has one move, and he uses it over and over again. Freddy, though, is reduced to a cartoonish villain. He mostly rattles around the place, breaking the fourth wall and saying "bitch" a lot. He's like a parody of himself, neither scary nor interesting. Considering this is Robert Englund's last appearance as Freddy (retiring from the role after this film), it's a sad way for the actor to end his tenure.

As far as scares, then, the movie really only has gore to rely upon and, to be fair, it does have plenty of that. Honestly, it probably has too much gore as every attack, every slice from a killer's weapon, ends with a huge spurt of blood. It's Evil Dead-levels of comical blood spatter and while amusing in the short run, it eventually gets to be too much, just one more layer of cartoonish stupidity layers on to this dumb movie.

Watching the film, I was stuck trying to figure out if there was a good movie buried within Freddy vs. Jason. Obviously we'd have to ditch some of the over-the-top blood, as well as Freddy's cartoonish performance. I also think, for once, we need to lessen how many people Jason kills, give more time over to a few specific victims so we can make those particular deaths more meaningful. And we need to give Freddy more to do, more ways to twist and manipulate the minds of the teenagers before letting Jason pick up the scraps. Right now we have a decent villain with nothing to do and a crap villain that does everything. 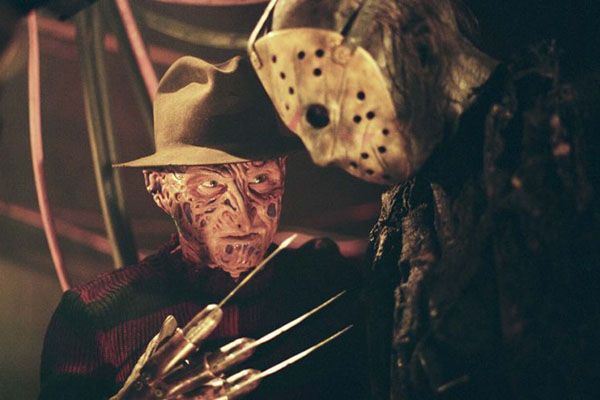 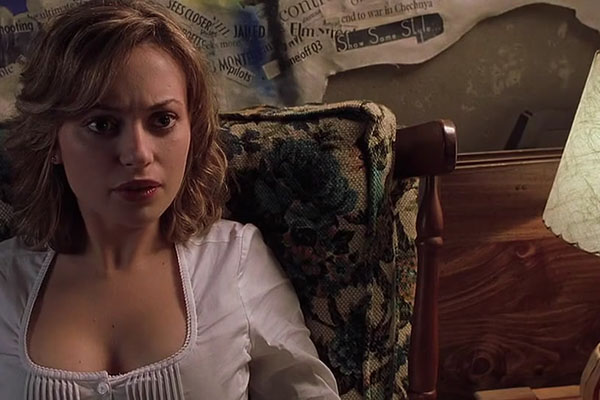 But, really, what we need is a better story and more interesting characters. The film has great production values without a story or characters to go along with it. It has the gloss and veneer of a modern Scream clone without the solid actors or their characters to make the film interesting to watch (so, you know, much more like Scream 4). The film would need a lot of work, a solid rewrite, and an entirely new cast (save Robert Englund) to even be half-way watchable.

This isn't the worst film from either franchise -- Freddy's Dead and Jason X take the low marks in each category, with the latter being the absolute worst film of the whole lot. It isn't really worth watching, though; once you get over the intriguing idea of Freddy and Jason being in the same movie, the film has nothing more to really add. It wastes a great concept on a mediocre movie and then just peters out before the end credit roll.

Promiscuity. A teen girl goes looking for her lover at the end of some docks, and then goes skinny dipping while she waits.

Said girl freaks out when she hears noises from around the camp. She runs off into the woods to get away from the stalker, only to meet a bitter end on Jason's machete... in a dream.

Twenty. A teen in Jason's dream (which, considering the nature of Freddy-controlled dreams, probably counts), another at a party, a third after the party (and his dad as well), ten teens at a field rave (a thing that really happens in this movie), and then four afterwards as Freddy and Jason battle it out, plus a security officer and a cop.