Jason, You Can Do It This Time!

Friday the 13th: The Final Chapter

I am seriously amazed these movies were so successful. That's not specifically a knock against The Final Chapter, but just in general the Friday the 13thOne of the most famous Slasher film franchises, the Friday the 13th series saw multiple twists and turn before finally settling on the formula everyone knows and loves: Jason Voorhees killing campers 'round Camp Crystal Lake. movies don't so much tell a story as just a random swatch of carnage committed by the Voorhees family. While they were probably cheap to produce and didn't require huge audiences to show up for the films to be successful, they also don't show anywhere the wit or creative of many other slasher series. And yet we're already four movie in the series, all of which were produced in quick succession. 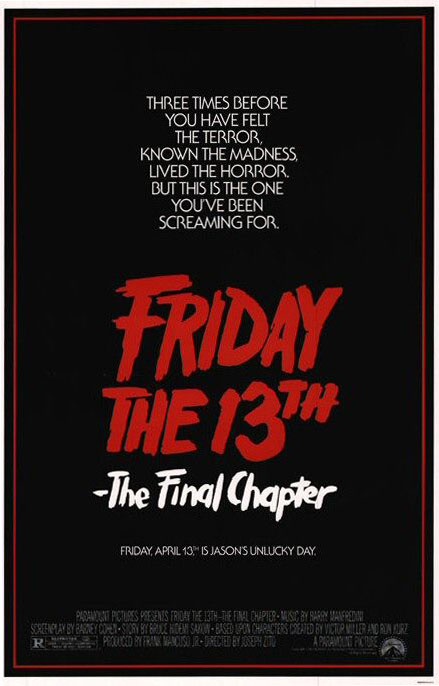 To me, these films are a lot like the Saw series -- the point isn't to tell a cohesive story (story in both series is inconsequential) but, instead, to put a bunch of young, pretty people in a space together and watch them quickly get bumped off, one by one. There are some thrills to be had, sure, but at the end of the day you know what you're going to get when you walk into one of these films. By the second entry, the formula as already been set. I never understood the appeal of Saw (the first film was basically a dumber Se7en and the rest were artless cash-ins), and I still don't understand the appeal of the Friday the 13th series (which have all been artless so far).

Also like the Saw series, the killer's adventures supposedly came to and end only to then be revived soon after. In Friday the 13th, Jason is back, somehow surviving a axe blow at the end of the last film that left the weapon embedded in his head. But, no, he's not dead, just resting, waiting for the right moment to wake up and strike again.

Escaping the morgue he was stored in (because clearly the paramedics, and the morgue attendant, don't know what a dead body looks like), Jason flees out into the woods where he gets to terrorize two different houses that are right next to each other. One is a cabin that's the home of Trish Jarvis (Kimberly Beck), her younger brother Tommy (an already slumming in his early career Cory Feldman) who is really into monster makeup and creature effects, and their mother. The other house has been rented (at least for the weekend) by a bunch of partying 20-somethings who plan to get drunk, have sex, and get killed off by Jason. Okay, well that last part is only in Jason's plan, but he's really the only one that matters. In an around the territory there's also a hunter, Rob Dyer (E. Erich Anderson), whose sister was killed back in Part 2. When the killing begins, someone might just be the one to finally take Jason down.

Blessedly, this film quickly gets to the action (such as it is), getting rid of the overly long recaps of the previous films to just show us a shot of the campers from Part 2 retelling Jason's origin story (with quick kill footage cut in from all the movies so far). This montage is over quickly, showing the producers at least realized recapping the whole previous movie was unnecessary at this point. Whatever other qualms I may have about these movies, at least the people making them learned something during the process. 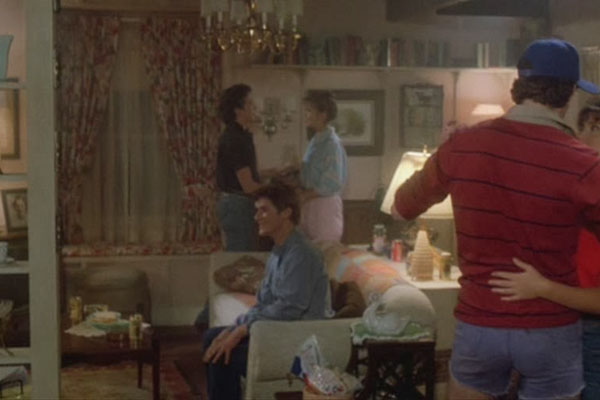 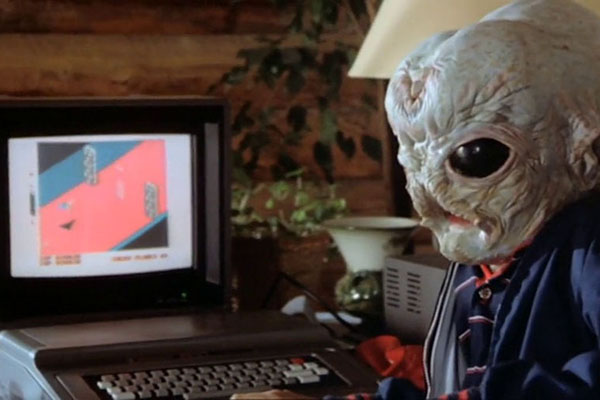 What hasn't improved is the over-all cast of characters. All of these people were so devoid of personality this time around that I honestly had trouble telling any of them apart. A ton of people are introduced, and then die, in quick succession in this film that bothering to learn anything about them is pretty pointless. With the formula already set in stone for these flicks, it's pretty obvious who the Final Girl will be (Kimberly) and that everyone else in the film, from the mother to the hunter and all the co-eds, are just fodder to get bumped off after they bump uglies. There wasn't much suspense too this film at all simply because it's so easy to know who will die (basically everyone) right from the get go.

And those kills just have not improved. While they thankfully got rid of the stupid "Voorhees Cam" that was a trademark of the earlier films, the kills themselves are still artless and boring. You may not know where Jason is automatically (because were aren't seeing things from his perspective half the time) but that doesn't really help matters. Instead, Jason is able to be anywhere, coming out of nowhere from impossible places. For instance, one kill requires him to have been sitting under the water for over five minutes just waiting for a random camper to decide to swim out to an inflatable raft so he can stab her through it. Another involved Jason hiding in a basement for who knows how long on the off chance someone wandered down there so he could stab them. Getting rid of the Jason came doesn't improve things if the impossible killer can now just materialize anywhere. There's no chase, so build up of the suspense.

Really, Jason needs more creativity. The number of people that get stabbed through the chest from behind is ridiculous this time around. It's like the producers had one really good special effect (that they already over used in the previous movie, mind you) and really wanted to put it to good use here. It'd be nice if Jason used more weapons and exhibited more creativity with the kills. I don't need Rube Goldberg contraptions (this isn't Saw, of course) but maybe have Jason run around a bit, pick up random weapons, and really go to town with gusto for a bit. Anything more that the quick stab and then cut away mentality of this film.

Certainly, the best part of the movie is the last act, which finally tries to change up the formula a little. Instead of just Kimmy surviving (as the Final Girl it's her right) her little brother does as well. Tommy is actually the one to save his sister, having the brilliant idea to dress up like a young Jason to confused the crap out of the killer. And then Tommy is also the one to finish the killer off. Not that Tommy doesn't go a little crazy as well. It's all a nice little twist on the basics of the series and, if the rest of the film had actually been as playful with the formula as this end sequence, I probably would have enjoyed it more. 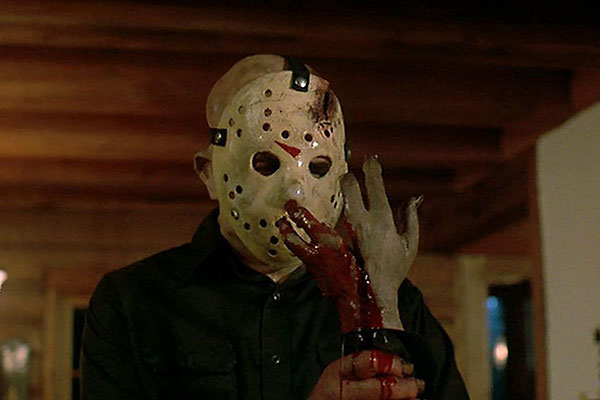 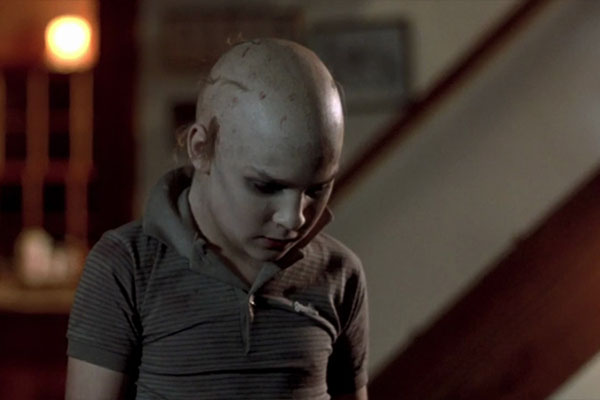 Within the bounds of the series, the (ironically named) Final Chapter isn't all that bad. It's a competently made move held back by the fact that it's a by-the-numbers sequel to a by-the-numbers slasher franchise. I keep waiting for the series to do something new, but I doubt that's going to happen any time soon. From what I can tell the next film in the series is more of the same (even as it seemingly changes up the killer... maybe).

A morgue attendant with lusty feelings, not only for a corpse (played as a joke), but also for a nurse. He and the nurse make plans to get busy soon after. Things don't go as they would have liked.

The morgue attendant gets taken out by Jason once the killer's supposed corpse wakes up. Beheaded by a bone saw. And, of course, the nurse gets taken out soon after.

Twelve, starting with the med techs at the hospital, followed by a hitchhiker, and eight of the teens from the party house, plus the hunter. It's also implied that Jason kills the Final Girl's mother, although we don't see the body so that one doesn't technically count.