Having killed Jason off in the previous film, Jason Goes to Hell: The Final Friday, New Line Cinema was at a loss in their attempt to continue the Friday the 13thOne of the most famous Slasher film franchises, the Friday the 13th series saw multiple twists and turn before finally settling on the formula everyone knows and loves: Jason Voorhees killing campers 'round Camp Crystal Lake. franchise. You might think, "but how can they continue a series that has just ended?" but you should also remember this is a series that has technically ended three times before. Jason never dies, and new Line wanted to find new and interesting ways to revive the character. Jason Goes to Hell setup a possible crossover with the Nightmare on Elm StreetThe brain-child of director Wes Craven, A Nightmare on Elm Street was his answer to the glut of Slasher films that were populating the multiplex. His movie featured an immortal character, Freedy, with a powerset like none other, reshaping the expectations for Slasher movies to come. series but, for whatever reason, the film was trapped in development hell. So where could the series go? 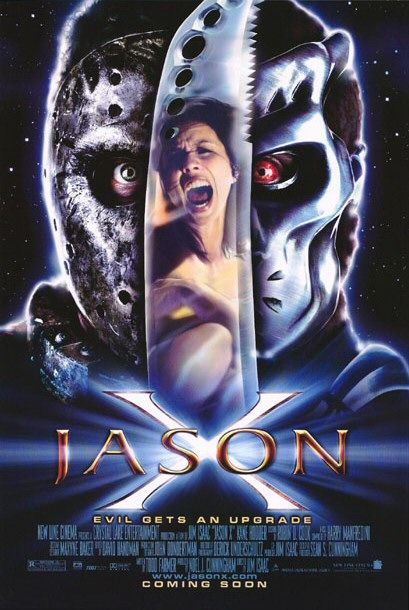 Well, the producers came up with a novel ideas: send Jason into space. Even though Jason had died just a few movies ago, the plan was to simply have the killer up and around again (with no explanation, mind you) and then freeze him, having get unfrozen in the future on a spaceship, and then let his kill a bunch of people in a sci-fi setting. And, credit where it's due, that's a pretty original idea for a Slasher flick. It's the only credit that's due, though, because in all other respects Jason X is easily the dumbest, worst, most ill-conceived film in the Friday the 13th series.

So yes, despite having been dragged to hell in movie nine, Jason is alive once more here. Imprisoned in a secret government facility, Mr. Voorhees is chained up, waiting for a chance to make his move. That chance comes when a stupid government official shows up at the facility to transfer Jason to a new facility -- Jason, with him immortality and ability to heal all damage, is an ideal candidate for study. The doctor in charge of Jason's care, Rowan LaFontaine (Lexa Doig), wants to keep Jason locked up, though, until such time as she can find a way to execute the killer. The best solution she has: freeze Jason and leave him for all eternity in a deep, dark, frozen hole. Unfortunately, Jason takes this moment to break free and kill everyone except Rowan. She leads the chase down into the cryo-freezers and manages to trap Jason inside before turning it on. Sadly, he manages to stab her through the freezer, and the system locks down, freezing them both for centuries.

Four hundred and fifty years later, a student research expedition finds the old facility and managed to rescue Rowan. Sadly, they also rescue Jason. While they are able to unfreeze the woman, Jason steadily defrosts on his own before waking up. Now the killer is back, stuck on a ship with a ton of trapped students, soldiers, and crew. It's time to see if the citizens of the future are any better prepared for Jason's evil (spoiler: they aren't).

As I said above, I do want to credit Jason X for at least trying something new. There aren't a lot of horror movies that push their killer out into space -- Hellraiser: Bloodline and Leprechaun in Space both did it first, so it's not an entirely original idea, mind you -- and at least Jason X commits to the bit. The movie promises Jason in space and, pretty quickly, we get Jason in space (unlike Jason Takes Manhattan where the killer doesn't even get to the titular city until the meager third act). Whatever qualms I have with the movie, the film at least delivers exactly what it promises. 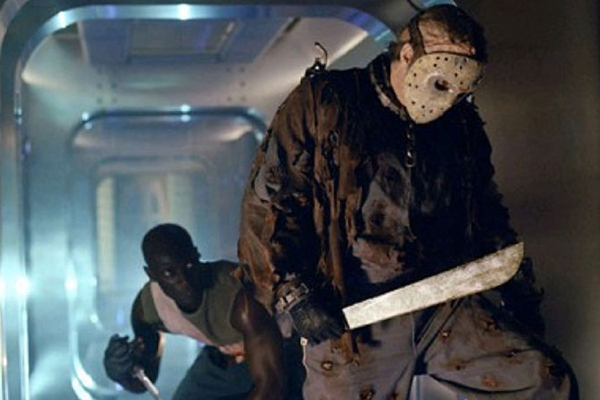 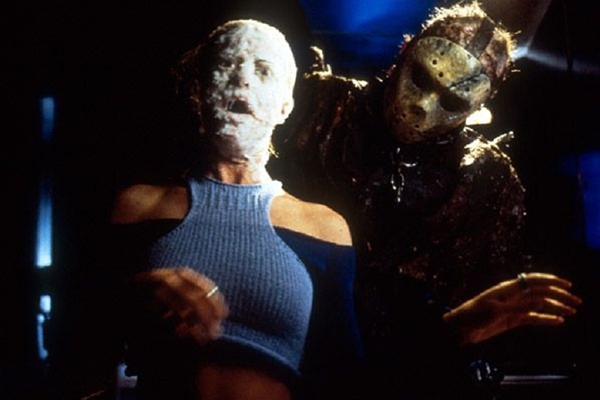 The issue is that the film delivers exactly what it promises, and that means we get a Friday the 13th film grafted onto sci-fi trappings. The problems start pretty early when you consider trying to make a sci-fi film on a Slasher budget. The Friday the 13th movies are all low budget cheapies while sci-fi needs a bit of a budget to make it look good at all. Without that budget you're essentially trying to do expansive horror on cardboard sets. Sure, some films can pull off low-budget sci-fi; the original Alien managed with a relatively small $10-ish Mil, but by comparison, the original Friday the 13th, made a year later, only cost $500 K. These movies just don't have the budget for big effects, and considering that the films all made about the same amount of money over the years, why invest more?

This hamstrings the film, leaving the producers to find ways to pull off the sci-fi premise without the money to back it up. In short, the film ends up looking cheap. Basic cable sci-fi cheap. I've seen high school productions of Alien that look better than this movie. It has a laughably quality to it that goes so far past "so bad it's good" it somehow invents a new level of crappy in the process. It would have been better if they'd just picked Jason up, dropped him on an alien world, and had him fight people in sci-fi jumpsuits out in a desert colony. That would have looked more realistic (and cost less) than the monstrosity we got here.

Beyond the cheapness of what's on screen, though, is a complete lack of originality with the story. Once Jason is awake on the ship, the film reverts back to the usual Jason tropes. It's rare to see the movie do anything new with the sci-fi setting -- Jason kills one person by freezing their head in a cryo-vat, a high point for the kills -- and it's only in the last act that the film tries to really capitalize on the new setting. The problem is that by then it's already too little, too late -- we've all tuned out by then. Even still, committing to a sci-fi Jason basically make the film into a low-rent riff on Alien. Characters wander around in the dark, Jason sneaks up behind them and then drags them off. He's little more than a xenomorph with a machete with a director behind the camera that doesn't know how to film something like that.

Also, for the record, I am fully on board with the next film in the Aliens v PredatorOriginally two separate franchises, the Alien and Predator series came together first in a series of comics and video games before, finally, Fox Studios merged them together is the Alien v Predator film franchise. franchise being Xeno with a Machete. Just putting that out there.

And yes, I know I'm harsh on this series. The Friday the 13th series has always been my least favorite franchise in the Slasher genre. Jason somehow manages to have less personality than Michael Myers (of HalloweenThe franchise that both set the standard for Slasher horror and, at the same time, defied every convention it created, Halloween has seen multiple time lines and reboots in its history, but one thing has remained: Michael Myers, the Shape that stalks Haddonfield. fame), with a complete lack of flair when it comes to his kills. Even his best kills are due to a good director behind the camera, building tension for the shots before Jason inevitably shows up and quickly stabs or slices someone. He's not a creative killer, at all, and any joy to be had from the deaths, especially in this film, is largely squandered. I don't know if this film could have been saved with a different killer in the setting, but it certainly couldn't have been any worse than how this film turned out. 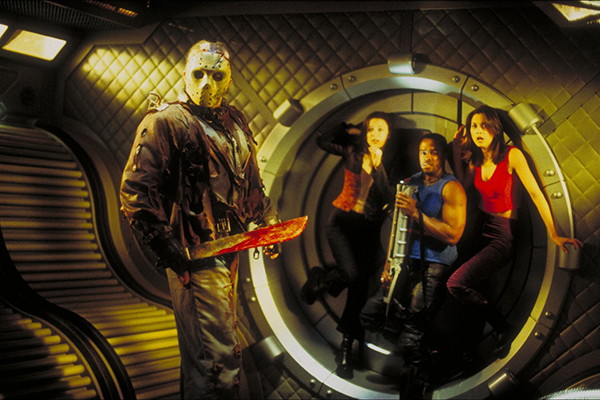 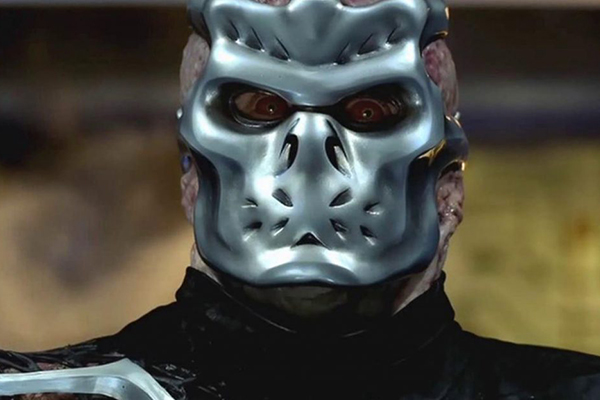 Heck, I would argue that the sci-fi setting on its own could have been cool if they just would have used anyone else in the New Line stable. Freddy could have been an interesting choice, a killer stalking dreams of those trapped in cryo sleep. That could have been a trippy, mind-screw of a movie to be sure. There just isn't a whole lot you can do with Jason, though -- he walks, he stalks, he stabs, without any kind of real motivation or story behind it.

So what we're left with is a film that doesn't have the budget to create it's setting, doesn't have anyone behind the camera that knows how to film it or anyone in front of the camera that can really act it, and a killer that never manages to rise to the occasion. Jason X is a waste of time and film and easily the worst film in the entire series. Hands down.

Now, I don't want to say things really get better from here with the crossover film Freddy vs. Jason. I do remember that film being tolerable, but that's not exactly a rousing endorsement. We'll find out next week when we explore that crossover flick...

Hubris. It's apparently always hubris. An external doctor/executive comes to the facility that is holding Jason and orders the monster's transfer. There is much hand-wringing and arguing about safety before the evil doctor puts his foot down and simply makes it happen. Jason, of course, has other plans.

It's actually a neat little five-pack. Jason, by this point, has already broken free of the chains holding him and has placed the guard that was watching over him in his stead as a decoy. Once the doctor and his goons come into the cell and find the decoy, Jason then quickly slaughters them all.

There is also an implied 60-plus kills when the ship, adrift after Jason kills the pilot, crashes through the glass dome of a space station before blasting through part of the station itself. This, of course, causes the station to explode, killing all on board. We don't actually see the bodies, so I won't count this, but I also just want to comment that no space station ever would have a fragile glass dome. Of all the stupid and illogical things in this movie, this is easily the dumbest.