Okay, really, why did this series become so successful? This is one of the longest running slasher film series in existence and yet, two movies in, I'm already bored with it. The setup for the films is beyond formulaic, there aren't any characters to care about, and the actual slasher action in this movies is handled so poorly that it's not even scary. Why do people like the Friday the 13th series? I'm trying to keep an open mind and understand, but it's really hard when the first two films in the series are laughably bad. 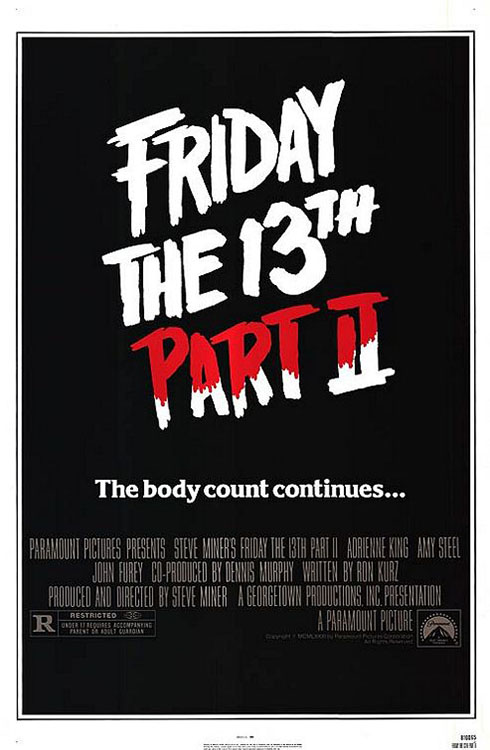 Part 2 opens with Alice, Final Girl of the first movie, reliving the events of the previous film in her dreams. It's been five years since that fateful evening when all her friends and co-workers were killed, and Alice is still traumatized by the events. Sadly, things aren't going to go well for her as, much as one would expect from her showing up, alone, at the start of the movie, a masked killer soon appears and kills the poor girl. With that out of the way, we then jump over to another camp right nearby Camp Crystal Lake (or, as everyone has come to know it, "Camp Blood"). This new camp is populated with counselors-in-training, getting ready for another summer of fun in the sun. Unfortunately for many of them, the mysterious killer has come to their camp and will soon pick them all off, one by one. Only time will tell if any of them make it out alive.

I find this film so very irritating. Friday the 13th Part 2 is a rote, by-the-numbers sequel that does barely anything new with its premise. Jason appeared as a nightmarish vision at the end of the previous movie so, obviously, he has to be the real killer in this film. That twist could have worked if the film played it as a possible mystery. "Someone is going around, killing campers. Could it be Jason?" The problem is the film doesn't play it as a mystery. From basically the beginning of the movie, once we see Mama Voorhees's head in a fridge, set there to scare someone, we can easily guess it's Jason doing the killing. There's no shock, no surprise to this twist (regardless of if you know Jason is the eventual killer in the rest of the series or not).

Not that the opening does the movie any favors at all. We spend 10 minutes (of an 86 minute movie, mind you) recapping the events of the previous film. That's 10 minutes we could have spent with the new characters, getting to know them, instead of spending it all, with Alice, right before she gets bumped off. A quick recap to remember who Alice was would be one thing if she were to be the heroine of this film as well. The way it's handled here, though, and how long it just drags on, just means it's a really long padding section that goes nowhere. We don't even need the reminders of who Jason is (and the back-story of Mrs. Voorhees) because the campers later tell ghost stories about him. It's redundant storytelling for no reason.

Even still, I would forgive this is the rest of the film was at all good. Horror movies can start slowly and then build up to the action, redeeming themselves in ways other genres can't -- who cares if a horror movie starts slowly if it packs in back-to-back scare in the back half? All we want is thrills and chills. Part 2, sadly, is lacking in thrills or chills (or anything resembling decent action). 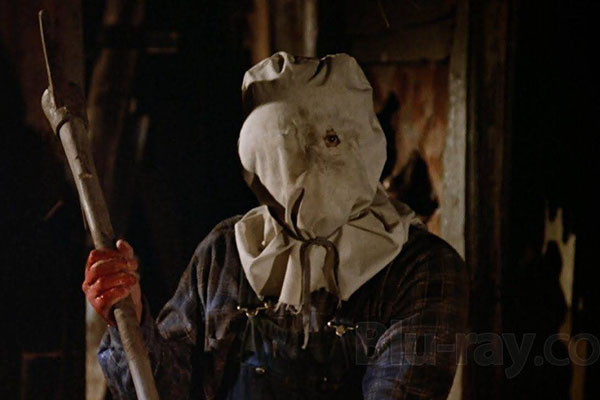 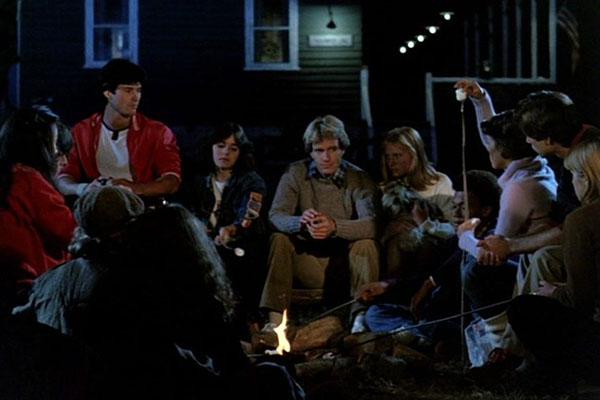 There isn't a single, scary moment to be had throughout Friday the 13th Part 2. Each and every murder is a short, stupid, expected affair. There's no suspense to the kills, no build up to increase the tension and up the scares. They all follow the same formula: Jason shows up (usually via a POV shot from his perspective), watches the campers until one of them is alone, creeps up behind them, and then kills them. He's very efficient, to be sure, slaughtering each and every one of them in mere seconds, but efficiency isn't scary. We don't get to savor the chase, wallow in the screams. Each sequence goes by so quickly that it's over before it even really gets started.

Worse is that it seems like the film is ashamed of it kills. All too often the film will cut away from the kill right as it's about to get gory. This might have been done to save on costs -- no need to clean a set, or costumes, or the actors, if you don't cover them in gore and prosthetics -- but it has the consequence that none of the murders actually have any weight to them. You don't feel the pain of the characters because the camera doesn't show us anything. We see their face, the quick realization they're about the die, and then the camera cuts away faster than a sex scene on network television.

I think part of the issue also just comes from the fact that the film tries to keep up the body count from the first film (a movie which also had a number of artless kills). With the shortened runtime (due to the padding at the start of the movie), that means all the murders have to be crammed in quick, which leaves less time for any build up, any finesse. Everything is a rush, from setting up the camp, getting through all the new characters, and then bumping them off as fast as possible. A smaller cast, with more time to get to know them, would have served not only the story but also the scares. We'd care more about the people Jason stalks and that would make their individual murders mean more to us. Instead, we don't care about anyone; when they die, it's meaningless.

The film doesn't care about the characters or the story, though. There's so little time spent building up the new camp setting and its cast, it's like the producers figured, "hey, we already recapped the first movie, so just apply that same story to this new film." The film doesn't let us know who anyone is or why they're at the camp (I just assume it's so they can work as counselors). They're just fodder for the movie to burn through at a stupidly fast rate. 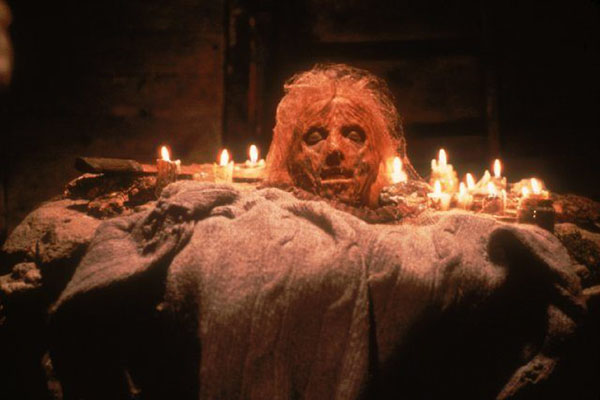 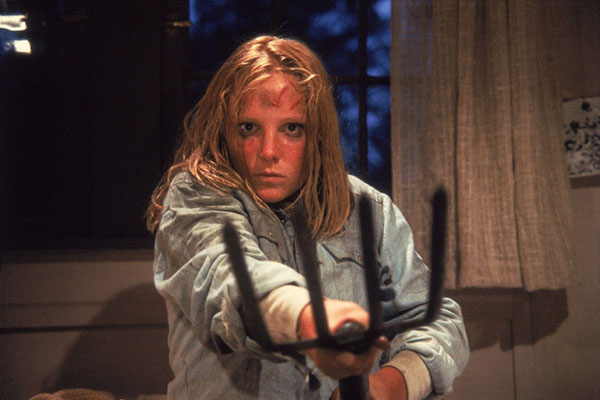 And then there's the end of the film which essentially is the end of the previous movie all over again. Same long-form chase, same kind of suddenly inept killer failing to murder the Final Girl again and again. Even the final jump-scare, the one good moment from the previous movie, is essentially recycled. It's a carbon-copy redo of the first movie, start to finish, without even half the grace of the previous effort (and that one was pretty terrible to begin with).

Which all leads me back to my previous question: why do people like these movies? The first one was pretty bland, but this sequel is astoundingly bad. Boring, tired, and redundant, it says nothing new about the material and manages to bungle even the basic tenets of slasher cinema. This series is going to have to get better, quick.

Apparently surviving the first movie is all it takes to deserve to die in the second film, as that's the fate that befalls the first movie's "Final Girl".

Poor Alice suffered in the first film, only to be taken out by a ice pick to the head in the opening scenes of the second movie. She didn't even live near Camp Crystal lake, which makes one wonder. Did Jason take the bus? Did he rent a car? Or did he just hitchhike? What driver would pick up Jason on the side of the road. This whole opening raises more questions than answers.

Nine confirmed. Alice may be the first to eat it, but an entirely unrelated group of campers soon fall under Jason's knife, plus the town crazy ("the harbinger") and a cop, adding another eight to the total. Oh, and a dog, if you count animals as well.