I will say this for the Friday the 13thOne of the most famous Slasher film franchises, the Friday the 13th series saw multiple twists and turn before finally settling on the formula everyone knows and loves: Jason Voorhees killing campers 'round Camp Crystal Lake. series: the early movies did try to craft a single, connected narrative. It's a dumb narrative that doesn't hold up to any thought on the matter, but it at least is connected. Most slasher film simply have the killer come back without explanation, but in the cast of this series, the producers thought, "if we kill the slasher at the end of the previous movie, we have to explain what happens next." I can appreciate that kind of thought, I just wish it had been put to good use on a better series than this. 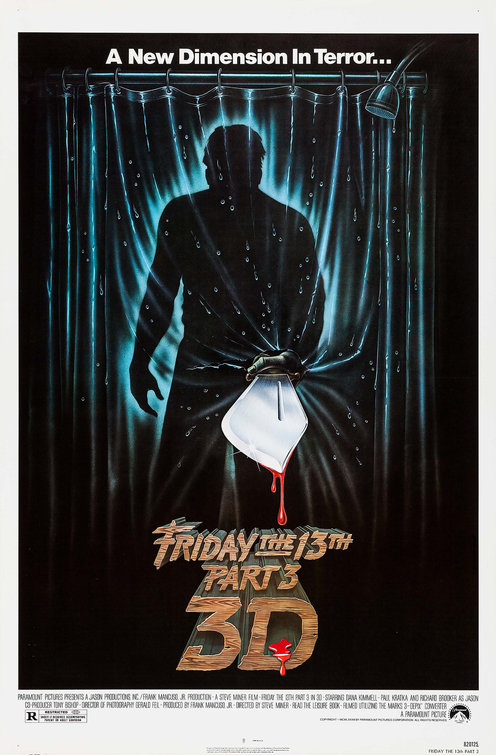 That said, this third movie isn't really that much better than what came before. The first three movies in this series are all pretty mediocre, but consistently so. Whether you enjoy this first trilogy of films or not will really boil down to how much of the same, repetitive action you can stomach from your slasher films. If you don't mind largely recycled plots and the same kinds of kills over and over, than Friday the 13th Part III is probably right up your alley.

As with the previous film, we begin with a recap of the movie we just saw. Although this section isn't as long as the needless padding from the first film, this is still five minutes of footage from the previous film. What's weird is that this time it doesn't even go anywhere -- the Final Girl from Part 2 doesn't even show up in this movie, so it's not entirely clear why they felt the need to remind us of what just happened. Regardless, the movie immediately picks up from these events with the Final Girl carted off in an ambulance and Jason off, stalking the woods at night for fresh victims. His journey takes him to a new location, a quaint farmhouse where a new batch of teens have just arrived for a party. This seems like the perfect time for Jason to work his magic.

There are a number of ways Friday the 13th Part III is an improvement over the first two films, but it's always by degrees -- this film isn't a very good movie by any stretch of the imagination, but it does do enough things right to be considered "the best Friday of the series so far" (as bad as this rating really is). It starts things off right by at least moving the killing away from a camp ground, giving us some new settings, and different ideas, to play with.

Also an improvement is the fact that all the teens are actual characters. They still aren't interesting enough to bother remembering any of their names, but they do all have distinct personalities (as one note as those may be), allowing you to at least remember who they vaguely are. There's the jock, the jokester, two stoners, the farm boy, the rich girl, her two pretty friends, and a bunch of bikers that harass them. It's not much, to be sure, but it's better than the cast of Part 2 who were all, universally, pretty looking teen, some with boobs and some without. 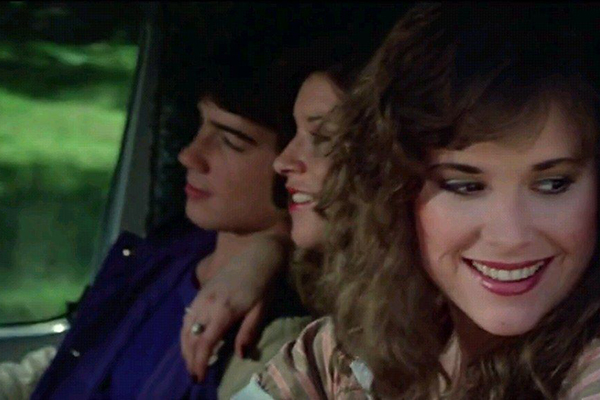 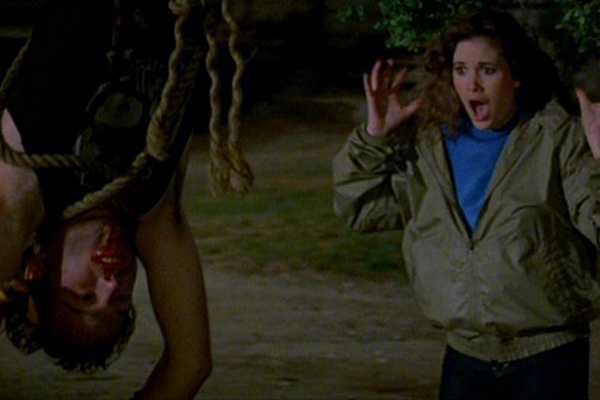 That said, some of the characters are really irritating and unnecessary to the story. The jokester kid, for example, pulls practical jokes regularly as his way of trying to bond with everyone else in the group. One would think this would lead somewhere, that his jokes could actually have some kind of pay-off for the plot (like maybe they confound Jason), and then he learns a lesson and becomes less irritating, but no. Instead, he manages to get two other people killed and then is killed himself. It's like the opposite of solid payoff for his character arc.

Worse are the bikers. These guys, who look and act like the Grease 2 idea of bikers, are introduced pretty early in the proceedings and essentially serve as foils for a couple of the teens. The show up, harass the kids for a bit, and then manage to get themselves all killed by Jason. They don't actually serve any clear function in the story since they die in the first act. They're just there to fill time and up the body count.

I wouldn't mind that if the kills were at all good this time but, like in the previous movies, they're once again pretty artless. This series has a problem with setting up and delivering on kills, instead largely relying on Jason suddenly being in the frame and stabbing someone. That kind of kill was already over done by the end of the first movie, and we're still suffering from it in this third movie. I get that Jason is a "Shape", a killer that stands in the shadows and kills with whatever simple items has had at his disposal, but then so is Michael Myers in the HalloweenThe franchise that both set the standard for Slasher horror and, at the same time, defied every convention it created, Halloween has seen multiple time lines and reboots in its history, but one thing has remained: Michael Myers, the Shape that stalks Haddonfield. series, and that kill manages to build tension and art into his kills. Jason could learn a thing or two from his competition.

To make up for the basic nature of the kills, the film tries to spice things up with 3D photography. That's right, like with the later Freddy's Dead, this Jason film tries to use 3D special effects to prop up an (already) aging slasher series. And, wow, is the 3D used to really poor effect. I hope you really like having broom handles waved past you eyes and yo-yos thrown at you over and over, because that's as much creativity as you can expect from the 3D in this movie. It's distracting without, in any way, adding anything to the movie at all. 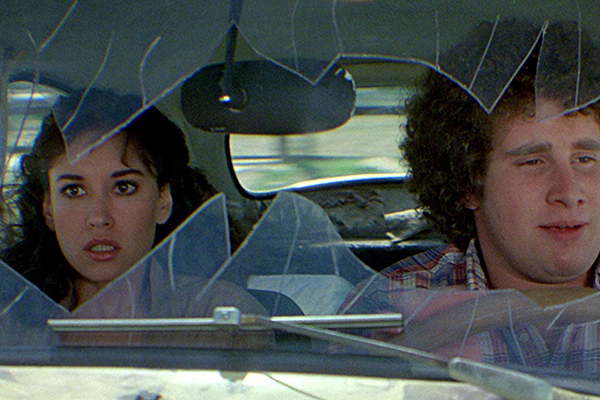 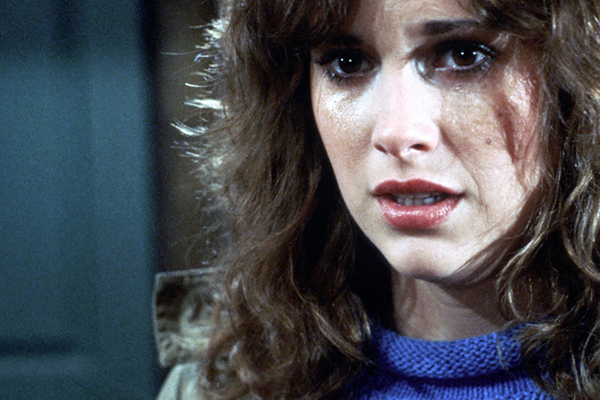 It all feels so pointless this time around. The plot structure is the same -- slow-building opening act, quick flurry of kills in the second act, and then a long chase between Final Girl and Jason to cap the movie -- and nothing about the movie is really all that new. Hell, it even tries to pull the same kind of end-section jump scares at the previous movies, and they make even less sense here than they did before. There are moments where it feels like the filmmakers might actually understand how to build a decent slasher movie (focus on the characters, give us a new setting, let everything build), and then, once again, they bungle it. They always bungle it, so I don't understand why they keep trying. Hell, I don't understand why audiences kept going back for more, either. Everyone is to blame for this movie series.

At least, with the next film, everything is supposed to finally end... for the first time. Let's hope The Final Chapter gives enough of a decent ending to cap this first quartet of movies. I keep thinking "it really can't get any worse" and, time and again, this series disproves that notion.

Being a couple of slobs. A husband is kind of slovenly and the wife is a bit of a nag. Really, their biggest sin was being in the right place for Jason to kill them. Jason doesn't need any more reason than means and opportunity.

The main party, though, kicks off their sinning spree with a solid bout of pot smoking. That certainly qualifies them for killing in the world of slasher flicks.

After the unnecessary recap of the previous movie, we're introduced to a married couple who live along the path Jason takes when he's fleeing the camp. The husband eats it first, taking a butcher's knife to the chest. His wife is then skewered with a knitting needle when she goes looking for him.

Twelve. The married couple kicks off this killing spree, and then a bunch of kids (and their nonsensical biker gang rivals) are knocked off at the weekend party, making for the highest body count in the series yet.