Back in the Land of Harlan

It really shouldn't come as much of a surprise that the first season of Justified was a big hit for broadcaster FX. Coming at the height of prestige cable television, and with a solid cast that gave charismatic performances, backed by a solid story from Elmore Leonard and a good production team, all the elements were there for a show that would jive with audiences. The trick would be figuring out where the series could go from there, especially as it moved further and further away from the setup of the original short story "Fire in the Hole". 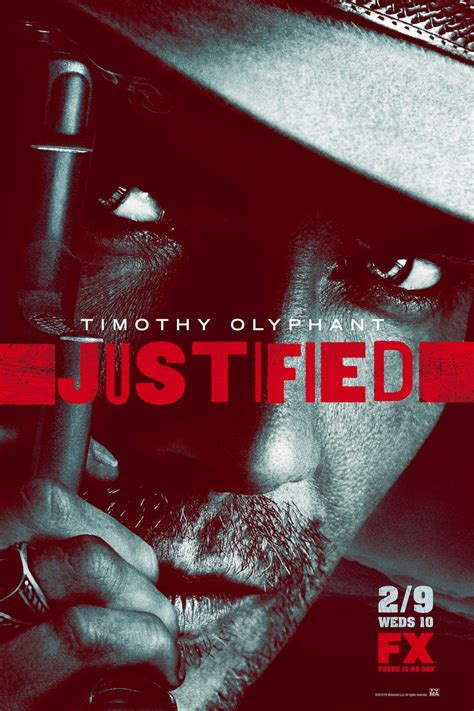 The answer, from the second season, was the expand the world of the series outward, adding in new villains and new locations around Harlan county. For me, though, this feels like a double-edged sword. On the one hand you can't have a series that goes for more than a handful of episodes without introducing more characters into the mix. That's just the nature of long-form storytelling. At the same time, though, Harlan County, KY doesn't come across like a big place. Everyone knows each other, everyone talks about each other, and from one week to the next everyone is up in each other's business. To introduce a whole new group, or clan, or whatever you want to call it, creating them whole-cloth, feels like a bit of a retcon. Can it work when the world of the show never mentioned these characters before?

Well, it works about as well as it can considering. The clan introduced is the Bennetts -- matriarch (and leader of the crime family) Mags (Margo Martindale), eldest son (and corrupt sheriff) Doyle, screw-up with a bum leg Dickie (Jeremy Davies)), and big (and simple) son Coover (Brad William Henke) -- a rival family (in the way that the Hatfields and McCoys were rivals) to Raylan's own Givens clan. Although Marshall Raylan Givens had managed to stay away from the Bennetts in the first season, dealing with other criminals (including the Crowder clan), Marshall business takes him into the Bennett neck of the woods, chasing after a wanted fugitive, and quickly Raylan is pulled deep into this criminal part of Kentucky.

While Raylan deals with the Bennetts, his one-time friend, one-time enemy Boyd has his own business with the Bennetts. Initially trying to keep his nose clean while he stays at Ava's place, he eventually gets sucked back into the criminal world. This actually isn't a problem for the leaders of the coal mine he'd been working at, Black Pike Coal. In fact, his willingness to get little dirty is seen as something of an asset. Corporate spokeswoman Carol Johnson (Rebecca Creskoff) recruits him to help her sign over deeds to land in Harlan County so conglomerate can take over the mountain and begin their strip mining process. This puts Boyd up against Mags, who has most of the deeds for the Harlan land under her thumb, and both sides of crime in Harlan means Raylan has to step in to keep the peace. It's a messy triangle of drama down in Harlan County once more.

When I watched this second season of Justified the first time through I really rather liked it. Going back and watching it right after binging through the first season for a second time, though, I starts to see some of the cracks in the setup. My issues with the continuity are one -- how can a family this big and powerful never get mentioned in the first season? -- but there's also the fact that despite Mags and her clan being pivotal to the overarching story, in so far as they are the "big bads" this season, it doesn't really feel like the Bennetts do much. They exist but the other players on the show have much more to actually do. 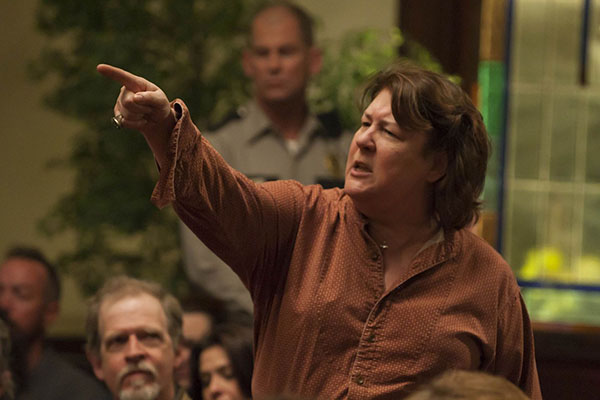 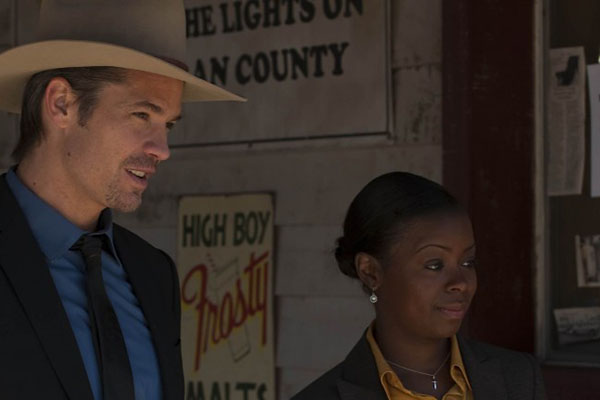 Let's think through what the Bennetts actually do this season. The first episode sees Dickie and Coover kill Walt McCready, a relatively harmless guy with a daughter, Loretta, Mags has the boys bring Loretta to her telling the kid that, "your daddy is down south doing business for us." Then, for much of the season the Bennetts are talked about as having big plans (while one of the boys or another does some low-level crime that just makes Mags angry). The plan to sell all of Harlan's land to Black Pike only comes up in the last couple of episodes, while the rest of the season is just a lot of posturing and getting ready for a rumble. Whenever everything comes to a head it's great, but the season spends a lot of time on other things, ignoring the Bennetts more than I would have expected.

Loretta is an interesting character that the season also squanders. Raylan kind of takes her under his wing (from a distances as he's not the kind of person that gets close to anyone). I think the series wanted it to seem like he saw a spark of himself in her or something, and there is certainly the same darkness, and that desire for revenge, in Raylan and Loretta. Sadly, again, the series spends a lot of time away from Loretta so while her few scenes make her into an interesting and rich character it's hard to say there was much for her to actually do this season.

Boyd, too, ends up in the season, although he at least gets a little more going on. He gets to have an arc of failed redemption, from man trying to be better, to failing, to just accepting that he's the kind of lawless outlaw fate wants him to be. Boyd frankly gets more to do this season than the Bennetts, which is more evidence that the series treats him as a true co-lead up with Raylan, and that the show is about both of them more than anyone else in the run. Boyd and his burgeoning criminal empire ends up stealing the show by the end of this season, and that's good, but it would have been nice for the series to put as much effort into the Bennetts as it did the Crowders.

Raylan, meanwhile, does have probably the best arc of the run as the show pushes him further and further towards crossing that line into lawlessness. Certain his convictions are tested when his ex-wife-turned-girlfriend, Winona, steals a bunch of money from the evidence lock-up. It was a spontaneous decision, and one she immediately regretted, bu by stealing the cash she immediately implicates Raylan, forcing him to defend her and find a way to et them money back. This is the closest the show has gotten yet to making Raylan into a criminal, even if he does toe it back and finds a way to make restitution (by putting everything back in lock-up). But the action does sour his relationship with his boss, Art, and that could have implications for the later seasons. 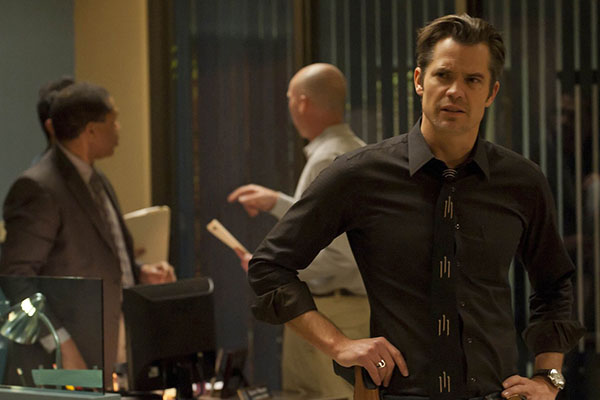 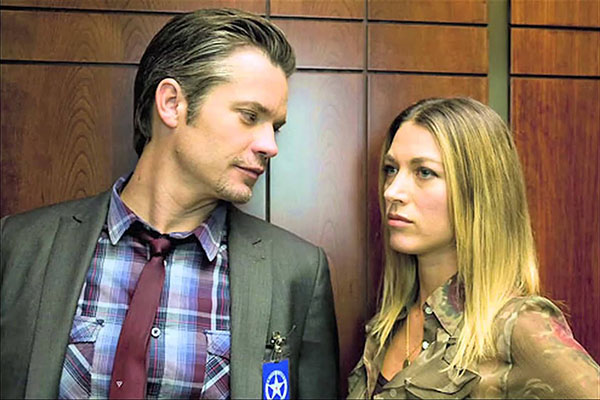 In a lot of ways, honestly, this season feels like a setup to something more. The story of Boyd becoming a criminal mastermind again starts here, after the series basically let him off the hook last season. The Bennetts don't all survive this season but the storyline setup here leads to pay off down the road for the series. An Raylan's own arc, for himself and with Winona, only gets more complicated here for later seasons to come. What happens in season two is actually less important than the building blocks for the future of the run, making this something of a setup season more than a complete story on its own.

From the long view, with knowledge of future seasons, this second season is more interesting. As a self-co0ntained set of 13 episodes, though, season two is lacking. It has a lot of good elements, and a few really solid episodes, but it lacks a cohesive element to really draw it together. Season one was Raylan versus the Crowders, a "good versus evil" storyline with some moral ambiguity in the middle. This season is all ambiguity, though, without as much motivation, and it drags a bit. The high quality of Justified means that even a slower season still plays really well, but certainly, despite fantastic performances all around, this season feels a little weaker than the fantastic first season that came before.