I really like Matt Smith's Doctor. As far as modern Doctor WhoThe longest running sci-fi franchise (at least in terms of sheer seasons), Doctor Who has seen cancelations, relaunches, and reboots, but the core of the series remains the same: a madman in a box traveling through time and space. goes, Matt Smith is my Doctor (I put Paul McGann's Eighth Doctor in with the classic era). I think Smith's performance as the Doctor is amazing, and I do think he had a better run of stories, and a better bond with his companions, than the previous two Doctors managed. I like David Tennant's performance, and I get what Christopher Eccleston went for with his Doctor (even if we needed more than just one season to really bond with the guy), but Matt Smith effectively became Doctor Who. 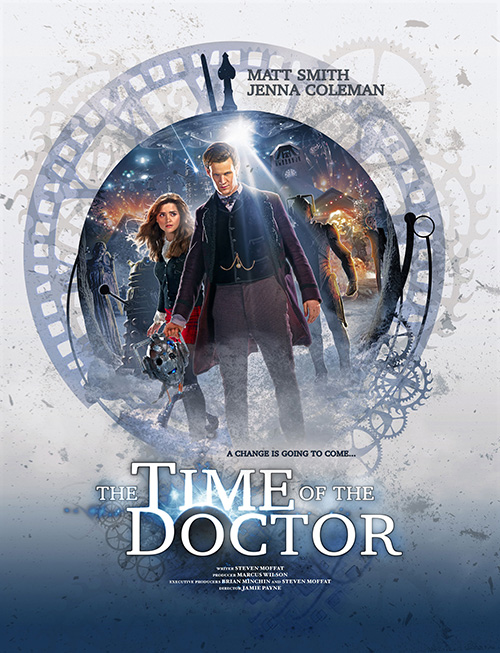 I think it's the strength not only of his performance but also that first season with his Doctor, Series 5 of the relaunched show, that really sold it. The writing was on point, the stories were great, and we had the playful dynamic of Smith's Doctor and Karen Gillan's Amy Pond that really carried the show. This dynamic did remain through the later series with the Doctor and the Ponds (Series 6 and the first half of Series 7), but it's fair to say that the show wasn't as strong during the later years. Matt Smith carried the show as well as he could, continuing to make it his own, but Doctor Who never quite found the heights of Series 5 afterwards (and that includes the latter Doctors, which we'll eventually get to).

After that first Matt Smith season it did feel like the show constantly tried to out do itself. We had the Crack in the Wall that blew up the universe, so the next season had to have a serialized storyline that led to all of time exploding again. And then we had to have the Impossible Girl come in the season after so she could have her own mystery that threatened the whole fate of the universe (and caused her to venture into every single era of Doctor Who for... reasons). The show certainly got bigger but I'd argue it didn't get better, just more bombastic (taking on shades of the Russel T. Davies era).

And then the big 50th anniversary special, "The Day of the Doctor" doubled down on all of that. It had the heart in the early going but all that fell away for a large amount of noise and explosions. It might have been interesting to see three Doctors converge at a single point, but then the show went bigger and had to tie in all 13 (with the next one glimpsed briefly) and it felt like the special lost the thread of what was really working. My fear, from there, was that the last episode of Smith's run, "The Time of the Doctor", would have the same issues. And, yes, it does. It feels, frankly, of a piece with "The Day of the Doctor", with the same great moments but also the same flaws dragging it right back down again.

In the special, the Doctor comes calling on Clara around Christmastime (as the series loves its holiday specials). While he has fun hanging out with her family (and a bit of comedy with holographically projected clothes that might night have been projected properly), the two get whipped away to a mysterious planet. There's an ancient signal coming from the planet, one that attracts the attention of every single alien race in the galaxy (all of them hostile to the Doctor). Examination indicates the planet to be Gallifrey even though it looks nothing like the Time Lord homeworld... and there's also the fact that Gallifrey is locked away in a pocket dimension (due to the events at the end of "The Day of the Doctor"). 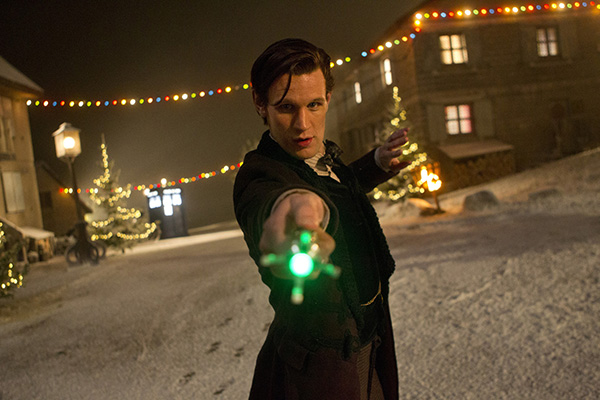 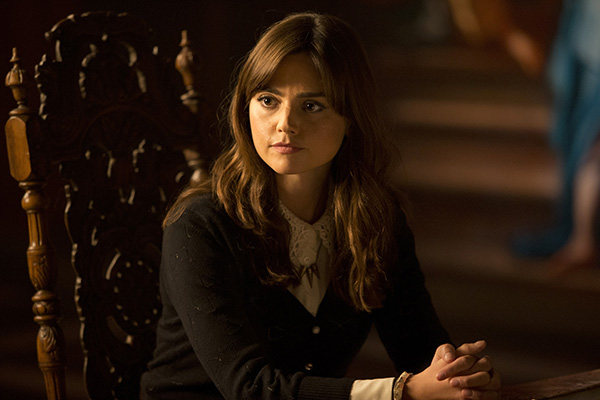 Going down to the planet, the Doctor and Clara find a town called Christmas (ugh, lazy writing), but within the town itself they find something quite curious: the Crack in the Wall, once again returned now as a scar from the previous explosion from the universe. The mysterious signal that brought everyone to the planet is coming from within the crack and, wouldn't you know it, that crack is what actually leads to Gallifrey. All the Doctor has to do is say his name, acting as a signal to the Time Lords and Gallifrey will return to the proper universe. But if he does that, every alien race in the universe will start the Time War up all over again. Just the threat of the Doctor saying his name causes the other aliens to start attacking, putting the town of Christmas in danger. The Doctor literally has to setup shop on this planet and literally save Christmas lest the poor people of the town be killed by rampaging aliens.

So I know I'll sound like a bit of a broken record, but I do feel like the bits that work best are the bits we've seen all through the Matt Smith era: his performance; his sparkly dynamic with his current Impossible Girl, Clara; the comedy both because pf the Doctor and sometimes at his expense. Smith is a charmer and he can carry any story, good or bad, just on the strength of his Doctor. This episode isn't as bad as some during his tenure (and not even as bad as some of his other Christmas specials), and that's in large part because Smith really works his hardest to make his last time as the Doctor count.

While that's all well and good this special still doesn't manage to rise high above the last couple of seasons of stories. For starters, as with the previous special, and many episodes during the latter half of Series 7, Clara just doesn't get treated very well here. She's a fun character, and Jenna Coleman clearly enjoys the role, but the special doesn't really have much for Clara to do. She gets to play straight man to the Doctor's wild shenanigans, but for the most part she just stands on the sidelines while the Doctor does his thing. I get that this special is all about Smith's Eleventh Doctor and we want to celebrate him, but Clara was written into the episode and it would have been better if she'd been given more to do that simply attend Christmas with her family and use the TARDIS to cook a turkey (seriously, that's her whole plot).

As with much of the latter half of Series 7, I really feel like the special was conceived with Amy Pond in the sidekick role but Karen Gillan going off to be a fabulous Hollywood actress threw a wrench in all of Moffat's plans. Where the Doctor was a fixture of Amy's life, Series 7 felt like it was building to Amy being a fixture of the Doctor's literal timeline. And then she would have been here to see the end of Smith's tenure, the last face he saw just like she was the first face as well. If that was the plan, Clara getting inserted here instead without anything to do is a poor substitute. And if that wasn't the plan then, man, they really dropped the ball with Clara. Why even have her here at all? 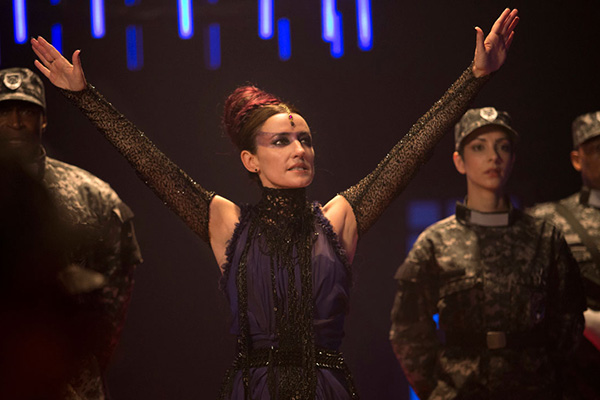 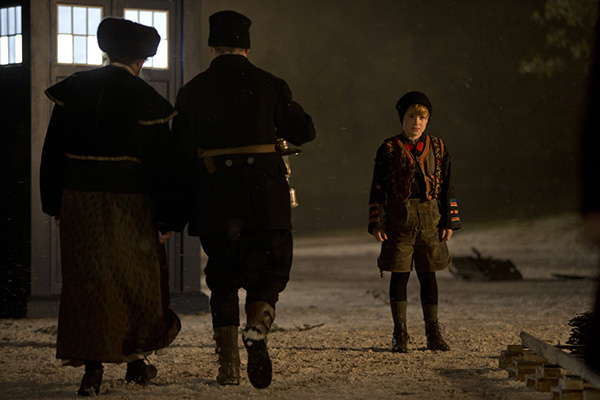 The episode is also super self-congratulatory, taking time to do a victory lap of every single storyline we'd seen over the previous three seasons. Not only do we have the return of the Crack in the Wall, but also a return of the Silence, too. And there's every single Doctor Who villain returned once more. Seriously, if I never have to see the Weeping Angels or the Daleks or any of these overused villains again it'll be far too soon (and I already know they all show up again in later seasons which... sigh). There's a perfectly solid potential villain introduced here, a futuristic Church that sealed off the planet to prevent war and who also don't want to see Gallifrey return. They could have served to act as the foe battling the Doctor over the years on Christmas's border and that would have made sense in the context. Everything else thrown in just feels like overload, villains thrown in without necessity simple because we need the victory lap.

Frankly, the biggest issue is that this episode suffers from overload. The few smaller moments we get, when it's just the Doctor and Clara hanging out, are so great I wish the episode could have kept the focus on them. Instead we get an over-stuffed episode that feels like so much less than it should. It's a whole lot of bombast without enough heart, a look back at the whole of the Smith run when I really wish it would have taken a little time to look forward instead. There are so many returning ideas thrown in that the episode all but ignores the few new ideas it introduces. It's all style, no substance, and hardly the emotionally fitting ending Smith needed.

What Smith really needed was Amy Pond. She was his center and the two of them made the show watchable. Without Amy the series felt adrift and this big, bombastic episode only serves to paper over the gaping hole at the heart of the series. Smith's Doctor needed better, and Clara certainly deserved a better final episode in Smith's era than this. It's a perfectly serviceable episode in its own right but as a finale for Matt Smith "The Time of the Doctor" falls very short.