When discussing the specials that came at the end of the David Tennant era of Doctor Who I expected to hate them all. This was born of a foul opinion for the first of the specials, "The Next Doctor", and then forgetting that the second special, "Planet of the Dead" even existed (although, on second watching, I liked both of these a lot better). I clearly remembered these specials were awful so how, exactly, did I get that opinion? 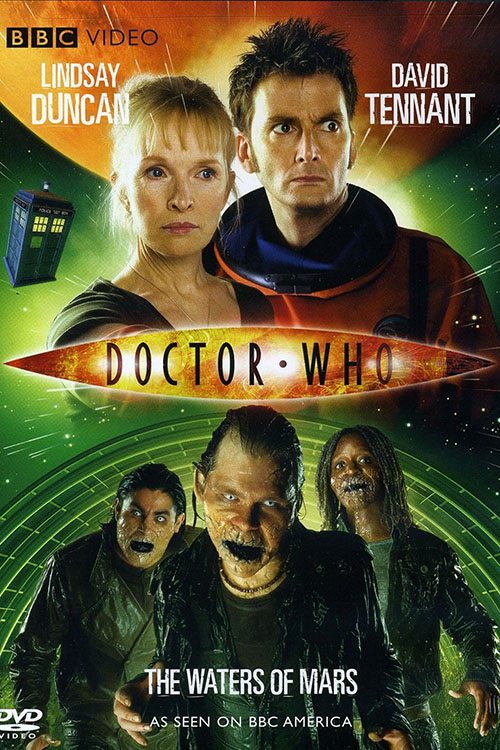 Well, with "The Waters of Mars" under my belt now I can firmly state that here is the point where the specials when right off the deep end. This is an episode that probably sounded great in concept but absolutely falls apart the second the story was realized in live-action. It's a campy, corny tale that never really gets any momentum going and just kind of lingers for an hour before petering out. And all for what? For story that would have basically happened the same way whether the Doctor showed up or not. It just doesn't work and, worse, features a climax that's totally out of character for the lead hero (at least in the way it's pitched to the audience).

The special finds the Doctor (Tennant, of course), landing his TARDIS on Mars so he can frolic about (in a space-suit, naturally, as the Doctor still needs to breathe air). He originally thought he'd landed on an uninhabited world but, instead, he was there right during the fateful mission of the Bowie Base One, Earth's first ever base on the red planet. The Doctor, naturally marvels at the base from the exterior but is then forced to go into the base when the helper robot, Gadget-Gadget, pulls a gun on our hero and forces him to go inside.

In the base the Doctor is confronted by Captain Adelaide Brooke (Lindsay Duncan), leader of the mission who is also none to happy to see an "unauthorized" person on the planet. She suspects he's from a rival space firm looking to steal tech (or something), but in fact the Doctor is in the right place at the right time as the base soon comes under attack not from without but within. Somehow the members of the Mars team are getting taken over by ancient parasites, living creatures that had been dormant in the ice of Mars for thousands of years. Now that they're free (and taking over the water of the base) it's up to the crew to find a way to stop them, or evacuate the planet before the creatures find a way to get to Earth. And in the middle of it all is the Doctor, oddly unable to help because this just might be one of the most important moments in human history and he can't change a thing.

There are ideas I like in the episode that almost make this watchable but they certainly don't redeem what ends up being a very goofy, and rather off-putting, episode of the show. For instance, I like the thought of the Doctor wandering into a key moment of time (a "fixed point" as he calls it) and realizing he can't change anything (although more on that in a sec). That's a different perspective from most episodes where the Doctor just shows up, does whatever he wants, and saves the day. But this Mars base, and what comes after, inspires humanity to reach for the stars (as he puts it) so changing anything could damage humanity's whole future. 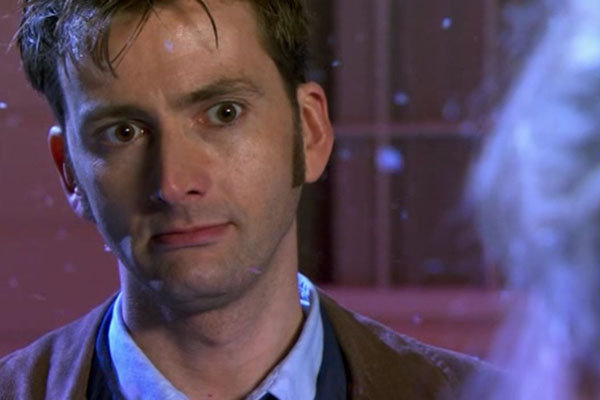 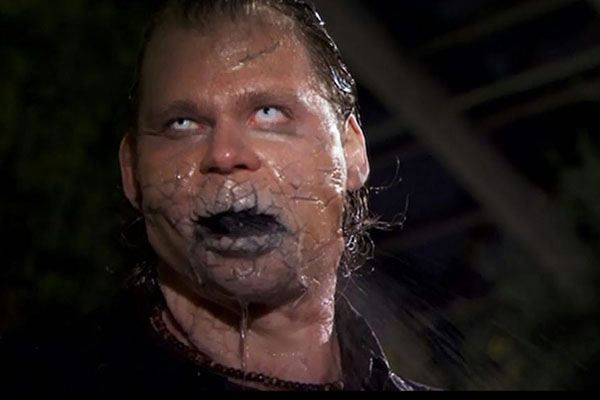 That is, of course, a theme that the Doctor has hit upon once or twice before. We saw something similar in "The Fires of Pompeii", and it's of course the rationale behind why the Doctor doesn't try to stop World War II, or the Inquisition, or any other major moment or movement in the history of the Earth: doing so would fundamentally change the direction humanity goes. Of course, the unspoken bit is that it could also change his own timeline since he's visited humanity's own future and that would cause paradoxes as well, but still, the idea is interesting.

The concept of the Martian critters living in the ice, infecting people and taking them over is also interesting. The show doesn't really explore the idea behind it well enough -- are these creatures the reason why other Martians no longer exist, or were these the only Martians to evolve before the planet effectively died? -- but it does provide a kind of alien monster for the Doctor to fight. All that said, I would have liked to see the Doctor try to find a cure for the infection instead of just throwing up his hands and saying, "well, nothing I can do here. Fixed point, you know..."

The "fixed point" theory, in fact, makes for a decidedly inactive Doctor for much of the run-time of the episode which ruins a lot of the fun of the whole piece. The Doctor purposefully sitting on the sidelines doesn't really feel like the Doctor at all, and while there are moments where he does get involved (he can't help himself) he's still a fairly passive member of this team for the duration of his stay and that just feels all wrong. The Doctor shouldn't sit on the sidelines where there are people to save and, no matter if their deaths were required or not, there had to be some other solution than having the Doctor passively watching as everyone dies.

Of course, then the Doctor does act right at the climax of the show and suddenly everything changes... for the worse. For one, his willingness to suddenly act and try to save a few people feels pretty hypocritical. If you could save a few people why not try to save the rest of the crew. He actively lets some people die even though he could have saved them at any moment ("hey, all, come into my ship which can get you to Earth safely in a snap") but doesn't, such that when he finally does act it feels out of character for the version of the Doctor in this episode. 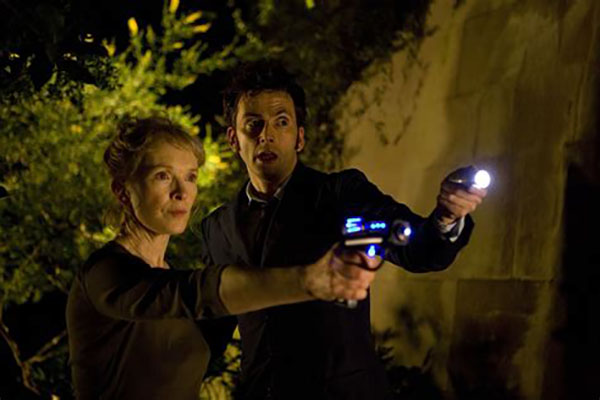 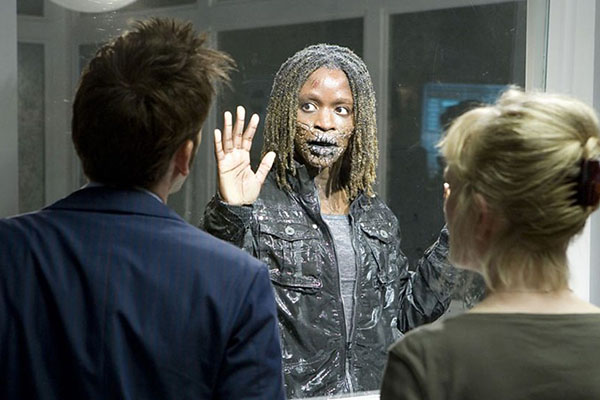 But then the episode takes a left turn and makes it that the Doctor has gone power-mad and the reason he saved who he could was because he's like unto a god and he can do what he wants. It's such a bad take for the character and while the episode tries to walk it back in its last few moments (so as to setup the last of the specials, "The End of Time") it just doesn't work. The Doctor wavers back and forth in his characterization, certainly never feeling like Tennant's Doctor normally does, let alone even finding a consistent characterization in this one episode. It's bad writing through and through.

The monsters, too, just don't work in actual practice. They aren't scary, just goofy looking, and they never managed to bring any energy to the piece. People taken over by an alien entity is a concept done repeatedly on this show but usually there's some sort of malevolent force behind it that the audience can identify (and be scared of). Here, the Martian viral creatures don't really have a character, they just have makeup effects (and a lot of water) when they take over a host. We needed some personality, something that we could latch onto so that the villains seems scary. These don't give us that leaving them hollow (if interesting looking) fiends.

Just all around this episode lands with a (wet) thud (pun intended). I get what the producers were going for, I think, but this needed to have a very different setup for the episode to work. Maybe instead of the Doctor being passive he could have been active but everything he tried to do still failed (showing that he was always meant to be there and that he couldn't do anything to stop the flow of time), or perhaps he just shouldn't have known what mission he was part of until the end when he learns that, right, this was the doomed Mars mission. That would have worked better, and then maybe it could have redeemed the villains if they had an earlier, and more active, role in the Doctor's repeated failures.

Whatever the case, "The Waters of Mars" doesn't work here. It needed a lot of work, and more time in the hopper, to make this a tale that actually befit Tennant's time on the show. Instead we have an episode that's a bad fit, and a bad look, for the Doctor. And, as his next-to-last episode is does nothing to help usher him out the door in proper fashion.