The Changing of the Companions

After two seasons of the Doctor and Amy Pond gallivanting around the universe, the third year of Matt Smith's run certainly took a turn. It wasn't just because the companions played by Karen Gillan and Arthur Darvill were leaving (an announcement having already been made ahead of time) but also because of the way the season was setup. Unlike previous seasons with one contiguous storyline for the length of the series, this seventh series was divided up into two chunks with completely different stories going on inside. 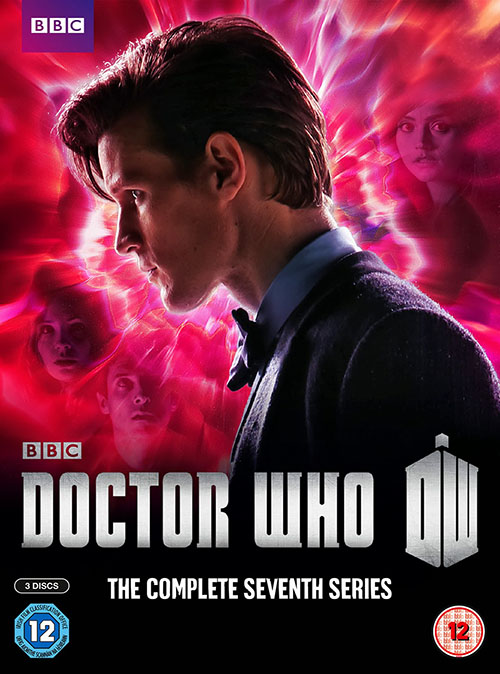 I will admit I had half a thought to actually cover the first and second halves of this series separately as the two parts do feel completely different. Both sections of the season have different intro credit sequences (a redesign of the previous credits sequence from the two prior seasons that was the redesigned again for the second half of the series), two different holiday specials -- "The Doctor, the Widow, and the Wardrobe" from December 2011, nine months before the season officially started in September 2012, and then "The Snowmen" in December of 2012 which preceded the second half of the season in March 2013 -- and a change in behavior, and dress, for Matt Smith's Doctor. You'd honestly be forgiven in thinking that the two halves were completely different seasons because, frankly, they are.

The way this season is put together actually ends up hurting the season more than helping it, in all honesty. Presumably, because of Gillan's burgeoning Hollywood career, the actress couldn't get tied down for a full season so the BBC elected to punt the issue and make two half-seasons instead. While I can understand the desire -- Amy Pond was popular the Beeb didn't want to let her go without a few more episodes -- that fact is that this arrangement really hurt the last set of stories for the Ponds. They don't feature in the first holiday episode (only appearing right at the end)m and then there's only five episodes for them to wrap up their story before they're hustled in in an entirely unremarkable episode, "The Angels Take Manhattan".

Amy Pond and her husband, Rory, were such an indelible part of the Matt Smith era that, frankly, they were as close to that Doctor as family could be. While the BBC may have only been able to get Gillan and Darvill to return for five (and a bit) episodes (or were only willing to pay for that much), the Ponds needed better. Their arc this last half-season amounts to, "oh, we should retire from the TARDIS," to "let's not retire from the TARDIS", to then, one episode later, "nope, we can't travel anymore because the show has permanently written us off." There were any number of places the show could have gently written them out that would have felt graceful -- when the Doctor dropped them off at the end of Series 6, or when they said, in two different episodes, that they wanted to retire. The way the show makes them waffle about it before shoving them off just doesn't work.

The second half of the season, which clocks in at 10 episodes (counting the mid-season special "The Snowmen"), is a bit better with its companion, the newly arrived Clara Oswin Oswald (Jenna Coleman). Here we almost have enough episodes to make her big arc work. I think three more episodes (bringing this chunk up to the traditional 13 of this era of Doctor Who) would have been better as it would have given her storyline a little more time to breathe (and maybe come together), but it's still better than the first half. 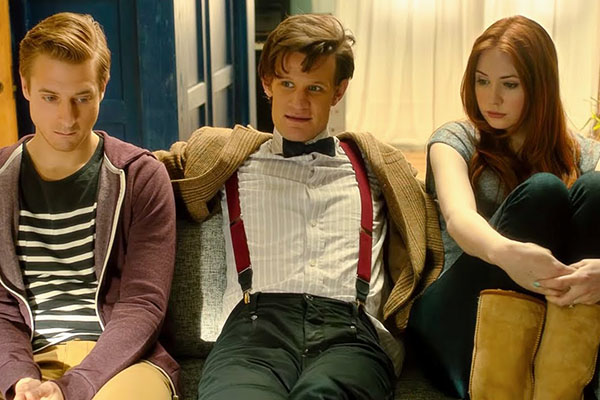 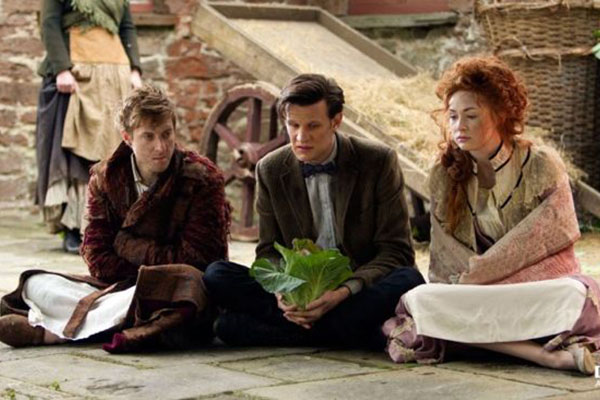 I think, ideally, this series should have been split fully in two and treated, truly, as two different chunks. Setting it up the way the series does it makes for a very awkward binge as there's no cohesion between the two halves. I think it would have been better to give the Ponds a couple of extra episodes so they could have had a much better, and more fitting, ending, something with a bit of an overarching storyline so that, when they were shoved out the door it felt fitting, like they actually accomplished something. Their final five (and a bit) episodes have no arc to them, it's just a few random adventures and then they're gone like it's just another day on the TARDIS. That simply doesn't work.

Not that splitting this season and making it longer would have helped all the issues. A big part of the problem is that it really feels like Moffat said all he had to say about the Doctor back in the previous two seasons. Series 5 delved into Amy Pond, her friendship with the Doctor, and the mystery behind her own reality (the crack in her wall and all that). Series 6 then redefined their relationship as it pertained to recurring character River Song, and that then put a new spin on the companions, and the Doctor himself. That was a full arc that then leads to... not much of anything in the final full season for the Matt Smith Doctor.

Clara does have her own big arc but, honestly, it just feels like a riff on Amy Pond. Frankly it feels like Moffat only knows how to write one female companion: a woman with a mystery that someone ties into fate of the universe and, in the process, redefines the Doctor himself. We saw that with Amy Pond and her crack in the wall, then we saw it again with River Pond and her relationship to the Doctor. Now we have it again with Clara, the "Impossible Girl" who (without spoiling anything) once again has a past that ties into the Doctor and his whole timeline. At a certainly point it all gets a bit ridiculous.

The Clara storyline doesn't work, in large part, because it lacks the heart of Amy Pond. I don't think the fault here lies with Coleman and she's a great actress and she adds a lot of spitfire and vinegar to her character. She has a similar attitude to Amy, along with her similar story, and Coleman plays it really well. The fault really lies with Moffat because it feels like he's still writing for Amy Pond even as he has to work with a new character. He couldn't change gears, effectively, and it drags Clara down this season. 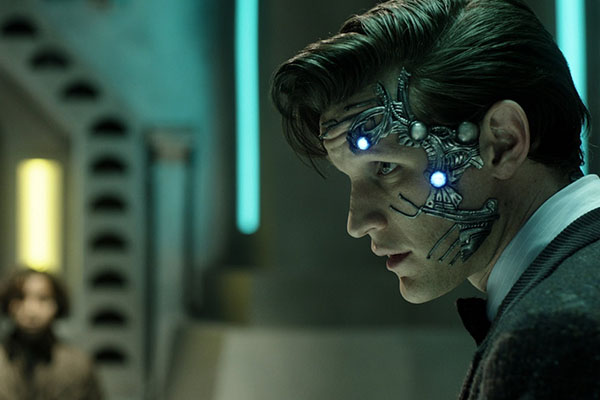 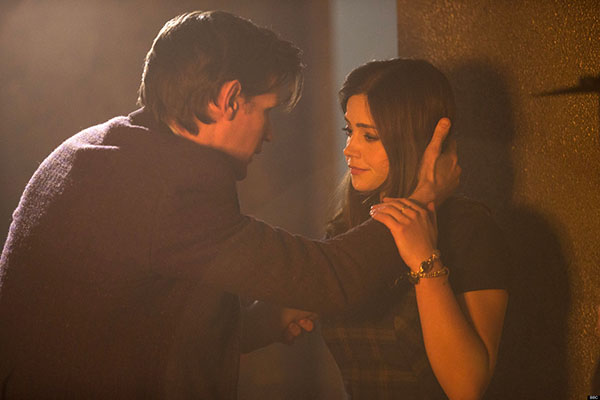 Because Clara has to get introduced, sucked into the adventures, and then have a big arc that ties back to the Doctor, all in the span of ten episodes, it really does feel like this whole arc is rushed. You can see that, in large part, with the villain of the piece. The Great Intelligence (voiced by Ian McKellan before being played by Richard E. Grant this season) is actually a villain in the series from way, way back (1967 and 1968) before being resurrected for Series 7 and the series has to work to reintroduce this villain (not glimpsed or mentioned at all since the Second Doctor) give it an arc, introduce Clara, give her an arc, and fit all of that into a truncated series. What gets left behind to make it work is interesting characterization for the Great Intelligence, along with any meaningful way that it really connects to Clara. Instead the series mostly ignores this storyline so it can run around with Cybermen, scavengers, and ancient insect horrors.

Individually the Clara episodes are interesting. The Cyberman episode, for example, "Nightmare in Silver", gives us a version of the villains that actually feels scary for once (even if the climax of the episode feels a little too bombastic, losing sight of the characters in exchange for more fireworks). "The Crimson Horror" is a freakishly fun little episode set in Victoria England with a decent mystery at its core that then gives way to some cool set-pieces. And "Journey to the Center of the TARDIS" provides a lengthy "bottle episode" with a group of people trapped inside the TARDIS right as she gets very angry; it's a fascinating episode.

But this is very much a season where the pieces don't up to a satisfying whole. The Matt Smith era feels like it's running on fumes at this point, which may be part of the reason the actor elected to leave after a couple of specials. This series marks the last full-time appearance of Matt Smith as the Doctor and, honestly, it does a disservice to him and all the characters around him. The Ponds deserved better, Clara deserved a better intro, and Smith deserved a much better final season to give his Doctor a proper send-off.

The Best Episode of Series 7

I think I would actually give this one to "Journey to the Center of the TARDIS". Adventures inside the TARDIS are rare indeed, and this episode not only gives us a chance to really explore the interior (instead of just hearing the Doctor talk about all five of his swimming pools), it also creates a rip-roaring adventure with the TARDIS actively fighting against the people inside. It's a very cool little tale.

The Worst Episode of Series 7

I really want to give this title to "The Snowmen", which is just a tedious episode that fails to reintroduce a classic, deep-cut villain properly but also fails to entertain at all. However, the worst episode really is "The Angels Take Manhattan", an episode that is supposed to act as a "proper" send-off for Amy and Rory but really fails to deliver. It's a timey-wimey episode that violates its rules regularly, and then has the audacity to say, "well, they're gone, and now they're a fixed point so we can't violate that." Really? But there's so much else that's wrong with the episode, from the repeated overuse of the Weeping Angels, to the idea that every statue in New York is an Angel (including the Statue of Liberty, which is balls-out-stupid), and, yes, the way it shoves Amy and Rory unceremoniously out the door. This episode just sucks.