What's Better than One Doctor? How About Three?

The end of the Matt Smith Doctor Who era happened to coincide with the 50th anniversary of the series. As such a the BBC elected to commission a special to celebrate the milestone. This special, "The Day of the Doctor", wouldn't be the very last appearance of Matt Smith's Doctor (that would come in the second special, "The Time of the Doctor", which we'll cover next time), but it is the bigger and more important special of this run. Why? Because it features not only Matt Smith but also a returning David Tennant reprising his role as the Tenth Doctor, along with John Hurt playing the previous unseen (aside from one tiny cameo at the end of Series 7) "War Doctor", the incarnation the Doctor doesn't like to talk about. 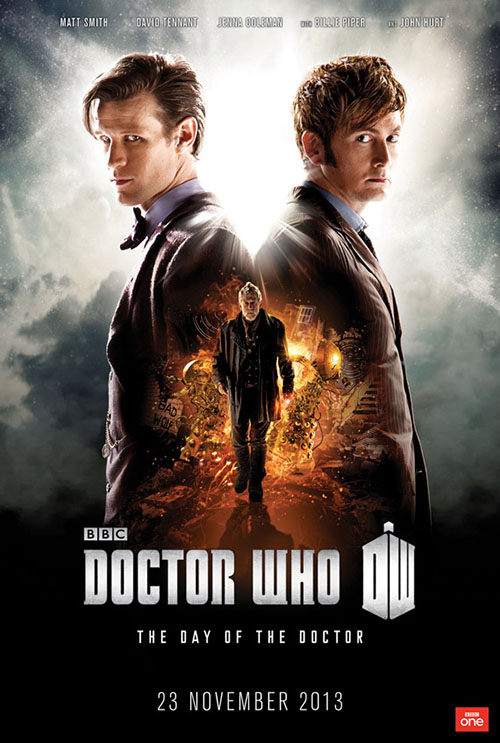 Since the revival of Doctor Who all the way back in 2005, fans had wanted to know more about the Time War, the events that rocked the cosmos and essentially reboot the series fresh so that the writers and producers could work with an effective clean slate on almost all continuity (a slate they very quickly fouled up, mind you). This was a big moment in the internal timeline of the series and it had never been properly glimpsed in the series. Introducing the War Doctor and promising a visit to that war-torn time, was a big move for the series and it made sense for the show to go there during its 50th anniversary.

Of course, before we can get to that we have to delve into the setup, and that takes us to Matt Smith's Eleventh Doctor. He and Clara get dragged in (quite literally) by UNIT to assist with a major mystery. A series of paintings had all recently had the glass covering them broken out from the inside, as if something in the painting had tried to get out. That was possible because all the paintings weren't just paintings; they were Time Lord art, slices of actual time preserved for hanging on walls (Time Lords are weird).Whatever had been in the paintings had figured out a way to escape the time-locked artwork and was running around in the present.

However, there was also another wrinkle to the whole affair: the paintings were kept in a secret vault by the order of Queen Elizabeth (the original, not the sequel sovereign), and apparently, back in the day, the Doctor had married her, becoming her secret King. All of this was revealed by a painting of Elizabeth alongside her "husband", David Tennant's Tenth Doctor. And after this was revealed a time portal opened that Matt Smith simply had to jump into. Thus the Eleventh got to meet the Tenth, and then the time portal dragged the War Doctor in as well, and the three had a meeting of minds. They had to come together not only to battle the secret menace alive in the paintings but also to help the War Doctor with his decision: use an ultimate weapon that could destroy the Daleks and Gallifrey which would kill millions but would end the Time War, or hold back and watch countless billions more die?

This decision has hung over the series since the relaunch. It colored the darkness hiding behind the eyes of Christopher Eccleston's Doctor all the way back Series 1 of the relaunch, and it's lingered over each Doctor since. How could a man who has saved so many people, gone on so many adventures with the motto of "we never leave anyone behind", also be the man that condemned millions to die even if it would save billions more. The math was there but the compassion was lacking from that decision and compassion was the Doctor's biggest weapon in the series. He always cared and he always gave everyone a chance no matter how evil they might have been. 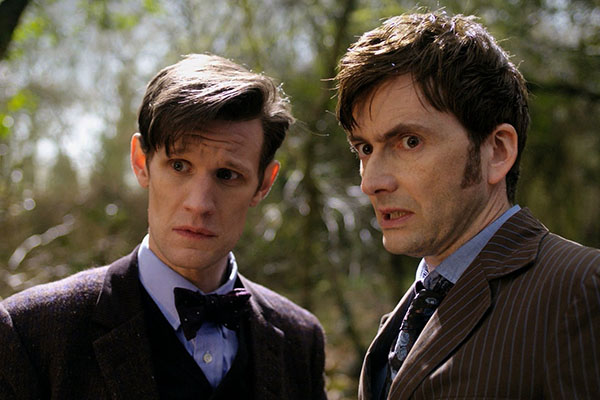 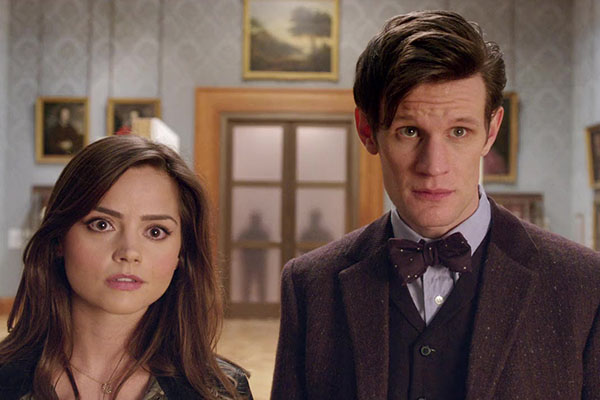 The series had always cast what the Doctor did as a villainous move, no matter how necessary it might have been. Trouble was, of course, that it was hard to imagine either Paul McGann's Eighth Doctor or Christopher Eccleston's Ninth as doing the actual deed. That was why, I'm sure, Moffat introduced the secret War Doctor into the run of regenerations, absolving any character we already know of the terrible decision. Trick there is that if we ever met the War Doctor we'd end up viewing him as a character, and if he acted too far from the Doctor would we even accept him as the same person as the faces to come after.

Casting John Hurt as the War Doctor was a solid move as the actor could play kind-hearted and villainous without breaking a sweat. But the special never paints him as a villain. His decision, it says, was not only fated but it was the only way to save the universe. This is colored even further by having him meet both the Tenth and Eleventh incarnations, letting them view him externally and realize there's common ground there between them. The film never paints him as a villain, it's our own expectations that put him in that place. The other Doctors, though, reveal he's just like them, another Doctor facing an impossible decision and then forced to live with the guilt of it.

Honestly, the best part of this special is just watching the three Doctors all pal around together. The early exchanges between Smith and Tennant are fantastic, an easy camaraderie hanging between them, acting like old friends even though this was the first time their two versions of the character had been in the same space. Just watching Tennant and Smith work off each other is an utter delight, and Hurt gets to join into the fun as well (once the other two Doctors open up to him and his charms), creating a great trio to hang out with during the adventure.

Clara, sadly, doesn't get as much to do in this episode and, frankly, feels like something of an afterthought for much of the run. Having three Doctors all together does certainly steal the oxygen out of the room, and it's easy to see why Clara doesn't get as much attention when you have these three guys all taking up space. The Doctor effectively serves as his own companion in this special and, frankly, I think the special would have been better off if it hadn't tried to awkwardly cram Clara in as well. I like her character I just don't think she was needed here. 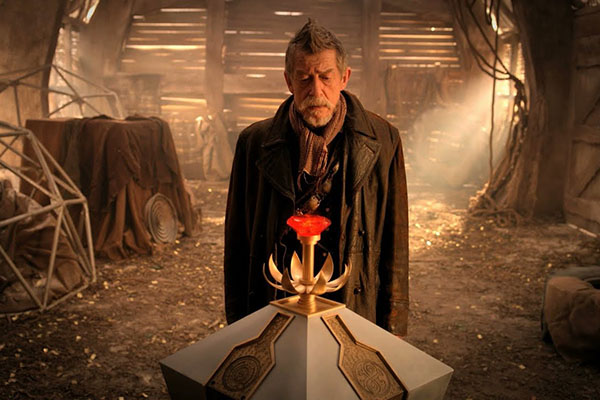 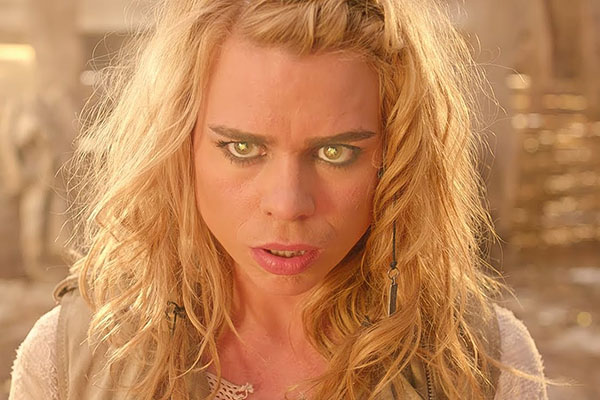 And while I like that we actually get to explore the War Doctor and learn about the time war (even seeing some of the carnage on Gallifrey in the process), I don't feel like the Time War itself really lived up to expectations. This was supposed to be a conflict that was tearing the universe apart, both by the hands of the Daleks and the Time Lords. What we see, though, are the Daleks attacking a planet dressed up like a Renaissance Faire and, well, not much else. Some of this was probably the budgetary considerations of the BBC but it would have been good to really see the war, to understand the danger of the conflict and the choice that the War Doctor had to make. That part never really sinks in properly.

Hell, the actual villains of the piece, the Zygons -- an alien race of shape-shifters -- also never sink in properly. They're a weird costume without a lot of character development behind them, hurt in no small part by the fact that they basically copy existing people right down to their personalities. We don't ever have a chance to view the Zygons as real things because they hardly exist properly in this episode at all. Yes, they're used to create an interesting twist that, thankfully, keeps the focus on people and not explosions (although this episode does go hard on bombast as well), and the concept of the Zygons is used well in the function of the story. There's just something drastically missing from they that keeps the Zygons from actually feeling like a real threat.

Going back and watching this special again I don't think it was as good as I first remembered. It gets a little silly, taking a few narrative shortcuts to get a bunch of Doctors together, and while there's joy to be had in that (especially when they get to pal around and have a good time) it's not quite enough to make this an absolute winner of an episode. On first viewing I think fans of the show will enjoy it just fine. Sadly, "The Day of the Doctor" just doesn't have the staying power to remain one of the series best, viewable again and again as an example of a classic of the form.