This is it, the last part of Peter Jackson's Lord of the Rings cycle, our last visit to Middle-earthCreated by J.R.R Tolkein, Middle-earth is the setting for the author's big sagas, featuring the characters of hobbits, dwarves, elves, and men. (at least until Amazon PrimeWhile Netflix might be the largest streaming seervice right now, other major contenders have come into the game. One of the biggest, and best funded, is Amazon Prime, the streaming-service add-on packing with free delivery and all kinds of other perks Amazon gives its members. And, with the backing of its corporate parent, this streaming service very well could become the market leader. gets its own Tolkien series in a year or so). And it feels right, in a way, to finish this out with the biggest, and best, of the Lord of the Rings films, the one that acts as a capper not just for Jackson's first trilogy but also as the end of the Third Age of Middle-earth itself. This is the end of Sauron's second war for the realm, his great (and final) defeat, and the true end of an era. 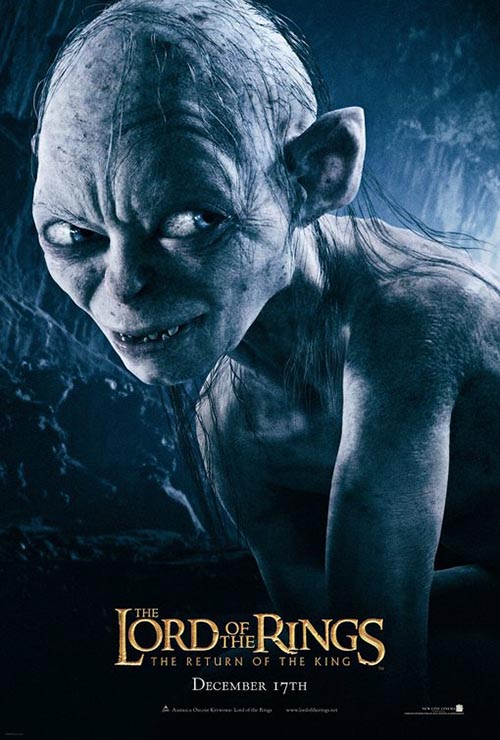 It's nice that it actually goes out on a high note. I know I've been hard on these movies, but that's because I can see the potential within them. Sure, these films have their fans and I would never state that I was one of them -- I didn't hate them but I never really got into them, either -- but that doesn't mean I didn't hope they could be... more. Jackson was slavish in his need to adapt everything from the pages into the films (going so far as to have Extended Edition versions of the movie with even more page-to-screen scenes, but thankfully no Tom Bombadil), and while that pleased a lot of the fans of the books it made for movies that, for me, were just way too long. I like me a long movie sometimes, when I feel the story calls for it, but here it felt like the story spun its wheels a lot when you just needed one film of some hobbits walking and then the ring getting chucked into the lava. Problem solved.

This third movie, though, just about justifies its own lengthy runtime. All the great meat of the stories, the battles and the intrigue as well as that fateful moment when Frodo finally gets to Mount Doom, it's all here. This is the film in the trilogy with the best sense of pace, the most activity and the strongest momentum. Of all the films this one at least is able to say, "yeah, I'm three hours long but there's a damn good reason for it." And then it gives us one thrill after another. The second film, The Two Towers managed to pick up speed in its back half and become something epic, with the long battle at Helm's Deep capping the film. Here we get bigger battles, more action, and a war to really cap the whole film. It's what I really wanted from these films all along.

In the movie, with Helm's Deep secured, the heroes have to look towards the next big danger as the armies of Sauron amass at Mordor for another try at taking over the world. Yes, the first army the heroes fought, the orcs of Sarumon, maybe have been bested but an ever greater force is ready to go to war and they have their eyes set on an even bigger prize: Minas Tirith, the great keep of the kingdom of Rojan. If this fortress falls then all other kingdoms of man would fall as well. It's now or never, one last great battle to secure the destiny of the world.

Meanwhile, in the great and sprawling adventure of Mordor, Frodo and Sam, lead by the duplicitous Golum, as still trying to find their way through to the end. Golum leads them into a trap, a den of a spider queen, so he can try and steal the ring once again. His plan fails, but Frodo was left weakened by the attack from the spider and is easily captured by orcs. Sam has to save his friend, climbing into the fortress of the orcs, before the two of them can once again make it that last few steps and get to the forge of the One Ring to throw the cursed item into the pit. But they have to be careful because Golum is still on their tracks and plans one last attack to regain the ring and have his "precious" once more. 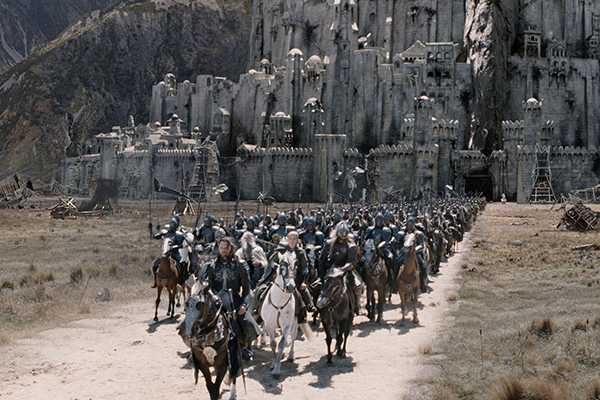 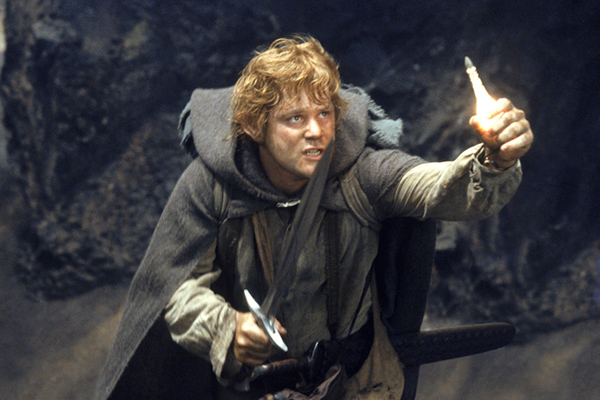 Like with the second film, this third movie has a fantastic storyline hobbles by a lackluster B-plot that seems to go on and on without actually getting anywhere. The sad thing is that the "B-plot" is really the main thrust of the movie. If Frodo and Sam don't throw the ring into the lava then everything their companions are doing, the great war to protect Minas Tirith, is all for nothing. And the problem is that, even here, three movies in, Sam and Frodo spin their wheels for a long time without actually doing anything. They have plenty of action beats, see a number of sights, yes, but what do they actually do?

Since day one (all the way back in The Fellowship of the Ring) their story has been that they need to get to Mordor and destroy the ring. Everyone else from their original "Fellowship" has gone on to achieve grand things, to have one storyline after another as they get involved in this battle or that chase, saving people and defending honor. But Frodo and Sam don't get to have no stories because their goal remains the same across all three films. It's like a "will they or won't they" relationship where the other partner is the One Ring. And, like all will they or won't they stories, the longer it goes on without resolution the more tedious it becomes.

And yes, yay, the One Ring goes into the pit. Of course it does. If it didn't end up in there one way or another then these films would have a very dark, and very different, ending (one not in the books so, obviously, it wasn't going to happen). We know where the story has to end so anything else just draws it all out unnecessarily. By the end of it I was glad they managed to throw the ring in, not because of the elation of seeing them finally complete their mission but just because I knew it meant I wouldn't have to follow them stumbling along any longer. It was a relief.

I know this is how it is in the books, I do understand that. But that's the beauty of movies: you don't have to slavishly film the stories one-to-one from page to screen. The fact is that (with just a few minor changes) Jackson wanted to film them all one-to-one and, in the process, he preserved some of the big failings of the original novels. This was his goal and he achieved it, which is something a lot of fans appreciate. I am not one of those people that felt the need to see every page of the books made into live-action film (which is why I didn't review the Extended Editions for these reviews). I really wish a little more paring down had been done to make the Frodo/Sam plot line move along at a better clip. 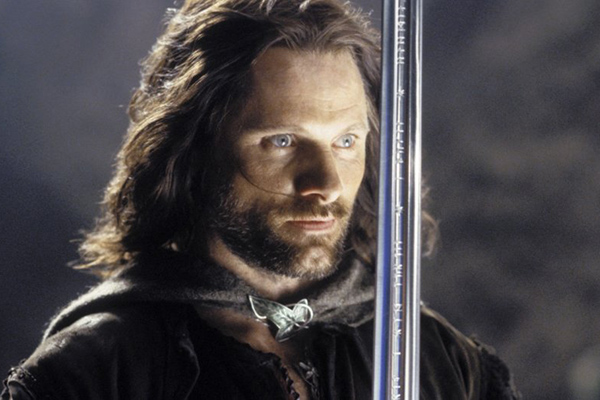 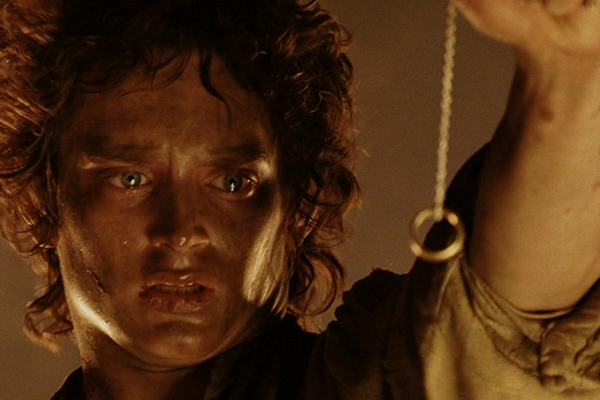 Thankfully most of the movie is taken up with the battles for Minas Tirith and, in this regard, the film positively sings. These battles are huge, epic struggles between humans and orcs. We get to see buildings crumbles, sieges laid, riders mow through battalions of orcs, only to be stymied by massive elephants (oliphants, as per the movie, or Timothy Olyphant if you're being silly). The battle rages on and there are so many great beats, finely crafted moments that bring in and continues to suck you through the battle. It's fantastic.

This is the movie I wanted, the war (done with plenty of practical effects) that gives me all the thrills, sights, and big moments I hoped for. This is the fantasy action that keeps me hooked, that makes me want more. It's everything I wished the other two movies could have had, and then some. If we could have had more of this (or just less of Frodo and Sam) I would have been a happy camper and given this film and absolutely glowing review. And I'm sure all the fans of the books and movies would have hated me for it.

So I'm stuck because I liked this movie more than the other two but I still don't think it was perfect. The parts I didn't like are, I'm sure, the parts fans love, and all the gripes I have could easily be dismissed by any fanboy (or fangirl) of the series. In the end I think these movies just aren't for me. They're great and epic, sweeping high fantasy to tickle the fans of Tolkien over and over again. I am not that fan and I will never be. I can see why people like them but, personally, I doubt I'll ever watch any of these films again. The Return of the King is easily the best of the set (in fact, the best of all six Jackson films, counting the three Hobbit films) but I just don't have it in me to revisit this movie again.

For all the fans, I understand your love of this series. I just don't feel it myself.