Part Three (But Just Pretend Parts One and Two Exist)

As we noted we discussing the 1978 Lord of the Rings, two different companies were producing adaptations of the original J.R.R. Tolkien novels around the same time. Rankin-Bass had gone first with their 1977 The Hobbit, but it was United Artists who produced (and theatrically released) the 1978 animated film based on the first volume (and a half) of the magnum opus. Weirdly, despite that film being a financial success, UA didn't produce a follow up. Instead, the responsibility for the conclusion more or less fell back on Rankin-Bass since they were already hard at work on developing an adaptation of the third volume, The Return of the King. And yes, the two films fit together about as poorly as you'd expect. 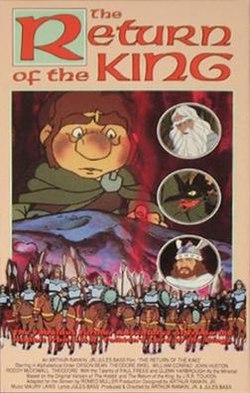 It's not just the fact that the two films were created by two different studios, or done with two different animation styles -- Rankin-Bass's productions used a unique-looking hand-drawn style while the UA film, directed by Ralph Bakshi, use hand-drawn animation along with rotoscoping and even a few brief live-action sections. There's also the simple fact that the two Lord of the Rings films don't sync up at all properly -- the UA film ends halfway into the second volume, The Two Towers, while The Return of the King picks up an indeterminate amount of time later, with new settings, new characters, and not much reference to anything that happened in the middle volume. It's really awkward.

The meat of the movie follows Frodo Baggins and his companion Samwise Gangee as they travel the last stretch to Mount Doom to throw the One Ring into the volcano from which it was first forged (the only way to destroy the enchanted, and evil, ring once and for all). Along the way they encounter all sorts of dangers, from orcs, to evil soldiers, mystical traps, and, of course, Golum, the hobbit-turned-lizard creature due to the evil of the ring who wants to get it back (after losing it all the way back in The Hobbit). It's a perilous quest and if the hobbits fail in their duty Sauron (the evil warlord who is brought to life by the power of the ring) will take over the world.

That quest, though, isn't enough to fill up and hour-and-a-half of runtime, so regularly we cut away to check on Minas Tirith, the fortified cities of the humans and last major outpost keeping the forces of Sauron from continuing their domination northward. If Minas Tirith falls, so falls the rest of the world. So Gandalf, Merry, and Pippin work with the men of the city to try and keep the defenses going just a little longer until Frodo can drop the ring into the volcano. And, wow, does this part of the movie just not work at all.

Part of the problem with the film is the fact that we really only have two characters we get to know, Frodo and Sam, so they're the only ones we really care about. They have a connection, a story between them, and as they progress they lift each other up and motivate the other further onwards. We get invested in the story of Frodo and Sam because they're such honest, good heroes. The only other character we know at all is Gandalf and that's only because he showed up in The Hobbit, and if you haven't seen that film before coming to the The Return of the King, you'll be utterly lost on almost everything. 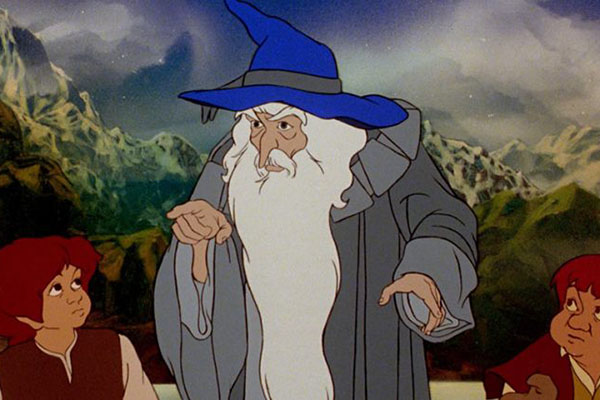 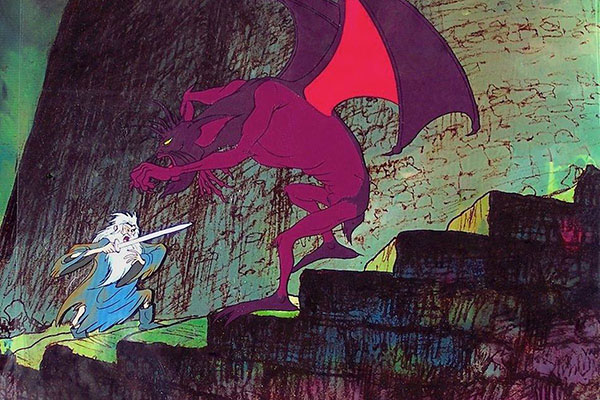 Make no mistake, The Return of the King is a sequel to the film(s) that came before. The 1977 The Hobbit is essential viewing before coming in to this movies as this 1980 production acts in all respects like a sequel (even reusing some footage from the previous film for this work). It features a framing device that gives prominence to Bilbo, and helps explain whatever story you might have missed between that film and now. At the very least you have to watch these two back-to-back to get anything at all out of The Return of the King.

That said, the 1978 UA The Lord of the Rings is arguably also required. As I noted, without any further context the only characters you'll care about in this movie are Frodo, Sam, and Gandalf, and that's because all the other characters that show up do so without any context. Merry and Pippin are here but they're just side characters if you didn't see them traveling early on with Frodo and Sam in the 1978 movie. Who is Aragorn and why should we care about the fact that he's at Minas Tirith to reclaim his throne? If you didn't see The Lord of the Rings you won't care at all. So much of the essential story that sets up The Return of the King is left out of the movie making it hard to audiences to invest in anything going on at all.

Rankin-Bass produced this movie as just an adaptation of the third book but that wasn't because they felt the first two had been covered well enough by the 1978 Lord of the Rings. No, the production company had always planned to just adapt the third one as if that was enough of the story to stand on its own. The problem is, of course, that there are two books of story that are left out of this volume and they tell us so much about the events that came before Frodo and Sam were within a football field of Mount Doom. How did Golum get there? Who is Galadriel and why did she give Frodo a phial of magic? Who is Eowyn and why is she so important? Details about these characters are glossed over in this movie and without at least some context provided by the 1978 film viewers would be confused about why any of it mattered. Hell, I've read the books and I still struggled to remember who was who and what it had any consequence in the long run.

I can respect the idea that the most important story is what's in the third book, that of the journey of Frodo and Sam. Maybe that's true -- without these two Hobbits, their little stroll, and a hot bath for the ring, the world is doomed -- but if the film is going to show us all of these other events going on then it has to provide more context. Otherwise, trim the story to just the hobbits and have it start back in the first book. The four hobbits leave the Shire, end up at Elfland, get some companions (who then leave before the border of Sauron's lands), and then have the two hobbits make the journey alone wishing they knew if their friends were safe. Keep the focus on the story we can understand and tighten it all up to be a fast and lithe hour-and-a-half. 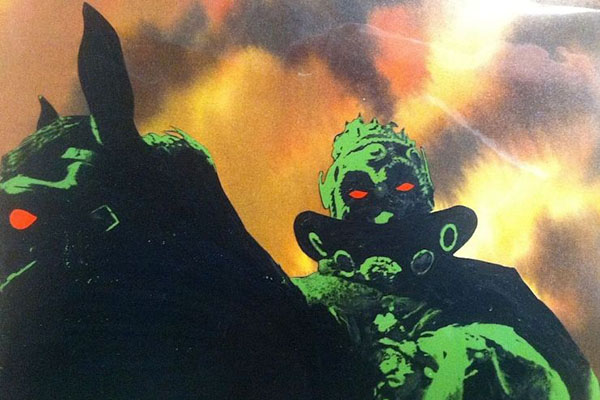 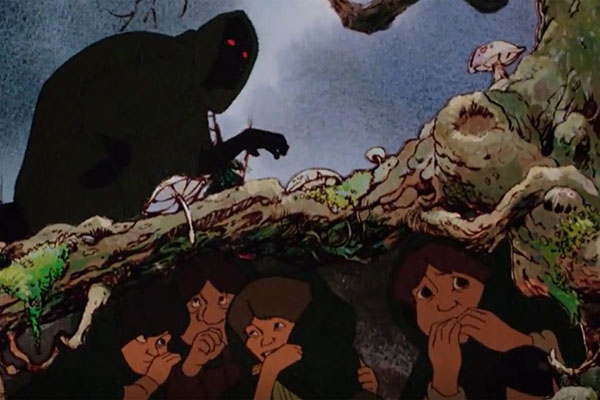 But then, the movie probably would have been able to cram in more story, and get everything moving at a much faster clip, if it didn't feel the need to break for a song every few seconds. Much like the 1978 The Hobbit, this film has a bardic narrator that has to sing along to all the adventures we're seeing on screen. What this really amounts to is our characters doing something and then the bard singing about what he just saw again, sometimes to impart a moral. It drags down the film to a ridiculous degree, padding what feels like forty minutes of actual script out to the full runtime of the film. It's dreadful.

Really, the best thing that I can say about this film is that, like The Hobbit, it's gorgeous to look at. Rankin-Bass really has such a beautiful art-style for the period, making this film feel lush and moody. Again, they created a feast for the eyes (especially considering the limitations of animation in the era this film came out). I just wish they could have put all of this art up against a good film. It's a good looking film when it could have been so much more.

In the end, The Return of the King is a noble failure. It has its heart in the right spot but never manages to bring the film together to a satisfying and complete whole. Its progenitor, The Hobbit may live on as a classic but I don't many kids had fond memories of this film after growing up. I know I barely remembered it at all.