The Hobbit: The Desolation of Smaug

Yesterday we went over the first part of Perter Jackson's Hobbit trilogy, An Unexpected Journey, and I was, admittedly, pretty harsh. Some of that is the movie's own fault -- it's overly long, too enamored with it's own (bad) CGI, and lacks a clear goal for the film. I mean, come on, the "Unexpected Journey" is only half over by the time the movie just casually ends. The best we get is a minor battle (that ends inconclusively) and then roll credits. Not a very auspicious start to the adventure. 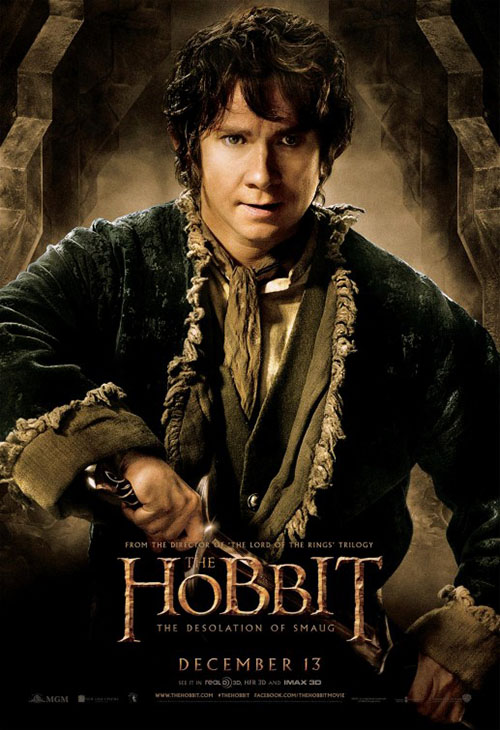 The real issue with the first film is, of course, the fact that unlike The Lord of the Rings, which was three books that (more or less) neatly could become three movies, The Hobbit is a single slim volume meant to tell one, focused, self-contained story. Breaking that book up into three (arguably epic) parts required a lot of retooling, and even then it was going to be awkward. Many of the really good bits of the book -- the encounter with the elves, the confrontation with Smaug (and the battle at Lake Town to follow), and then the Battle of the Five Armies all happen in the back half of the book, after the characters are established. The first part is much more minor by comparison, and that really how the first movie felt. Minor. Inconsequential. And, of course, over-long for such a barely-there about of story.

By degrees the second film, The Hobbit: The Desolation of Smaug, is a better film. Much of that, as we just outlined, is because interesting things happen in this film. Having made it (only) halfway to their goal in the first film the dwarves, along with Bilbo (Martin Freeman), still have quite the journey ahead of them. The first step is to get through to the lands of the wood elves as they have the only path direct to the old homeland of the dwarves (the only ways around would require a journey of 200 miles one way or 400 miles the other which would put the dwarves very far behind the schedule they had to maintain). This put them in direct conflict with the king of the wood elves, Thrandull (Lee Pace), who is none to happy having dwarves in his lands (because, as should be obvious, elves are pretty racist). After a terse discussion between dwarf and elf, dwarf king Thorin (Richard Armitage) and everyone else (except for Bilbo who has been invisible and hiding) are thrown in the cells to rot for 100 years (a mere blink of the eye for elves).

Thankfully Bilbo is there to free the dwarves and leads them on a clever escape from the cells using empty wine barrels to float down the river to Lake Town. This doesn't go entirely to plan as the elves discover the escape attempt and give chase while, at the same time, the orcs are also hot on the heels of the dwarves, giving us a very acting three-way battle along the river. The dwarves do finally make it to the outskirts of Lake Town and are smuggled in by Bard (Luke Evans), a smuggler (of course). Inside Lake Town they find a city rotten from within as the magistrate (Stephen Fry) is a corrupt and awful leader. The dwarves do manage to get out of Lake Town, armed and ready to take on Smaug, though, and inside have a feisty confrontation with the dragon after the great beast awakens. Then, after much bluster, a few attempts to kill the dragon, and a fair bit of specifying, Smaug flies off to have revenge on, well, everyone and burn Lake Town to the ground... and then the movie ends.

Credit where it is due, this movie is much more active. The first film could basically be summarized as "Bilbo joins some dwarves on a quest and then they walk a lot. Occasionally monster pop up, but the dwarves always escape (usually because Gandalf is there to save them)." Here, though, the journey isn't just a lot of walking but, instead, is punctuated by constant twists and turns as just about everyone they meet is vying to either use the dwarves or kill them (or sometimes both). The plot keeps pushing forward, keeps finding way to engage the audience, to keep their attention simply by dangling new shiny things in their faces while also spiking it with a lot of action. 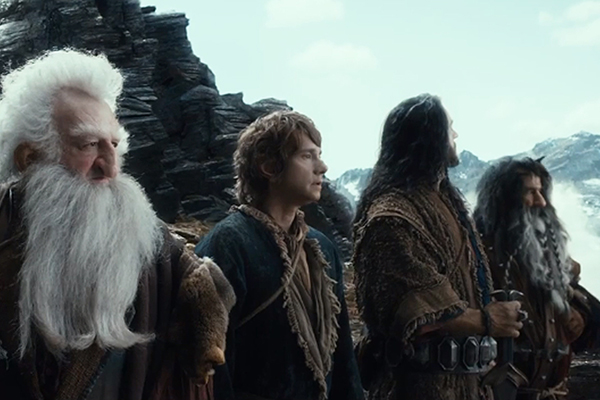 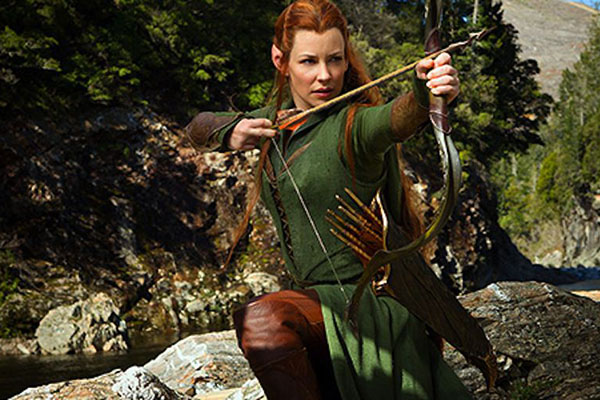 I also feel like the CGI in this film is better looking and better used than it was the in the first film. All three of these movies (including The Battle of the Five Armies, which we'll get to tomorrow) were all filmed back-to-back-to-back, just released one year after another. This meant that the second film had an extra year of post production to get everything looking better, to really nail down the CGI. While it's not perfect here, still with some scenes that look obviously fake, everything in this movie has a better layer of polish to really make the film look good.

Some of that may also be my own hardware (although this is just supposition). When I first watched the film is was on an older HD TV and the CGI didn't look all that great. I've since upgraded to an 4K UHD TV and this movie (along with a lot of other stuff I watch) has seen a marked improvement from the quality viewing experience. There is some basis for this as Jackson filmed the movies using cutting edge technology (and at a higher-than-normal frame rate); when it was shown to audiences on inferior hardware (which was most theaters of the time) people complained that it looked too fake. Better hardware meant for the films might just improve the viewing experience.

That doesn't mean I think you should go out an upgrade your TV just to finally appreciate all three Hobbit films. While there are certainly movies worth upgrading for (Mad Max: Fury Road in 4K UHD is practically transcendental), The Hobbit films are not worth the price of admission. While they look better it doesn't change the fact that the first movie blows and this movie is only slightly better.

Part of the problem is the fact that, like the first movie, much of this film is obsessed with just about everything going on in the world besides the quest of the dwarves and Bilbo. Gandalf (Ian McKellan) leaves the movie in the first act and never rejoins the dwarves. Instead he goes off in search of the darkness spreading across the land only to discover Sauron, the dark warlord, has returned. Who is Sauron and why should we care? Well, if you haven't seen Jackson's Lord of the Rings trilogy first you wouldn't know because this film doesn't really explain it. It just assumes you know who Sauron is and that he's a bad motherfucker. 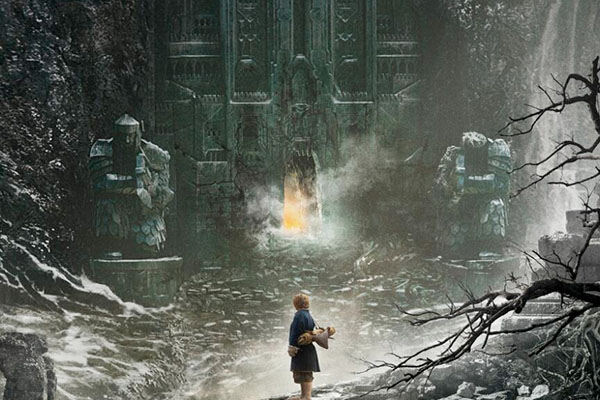 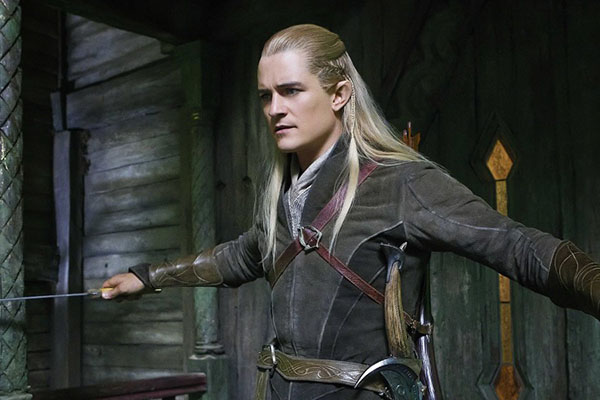 Like the first film, this film assumes, time and again, that you know all about The Lord of the Rings. While I get that this is a prequel trilogy and a lot of people had watched the previously released trilogy first, a good prequel can stand on its own. Much as I love to savage the Star WarsThe modern blockbuster: it's a concept so commonplace now we don't even think about the fact that before the end of the 1970s, this kind of movie -- huge spectacles, big action, massive budgets -- wasn't really made. That all changed, though, with Star Wars, a series of films that were big on spectacle (and even bigger on profits). A hero's journey set against a sci-fi backdrop, nothing like this series had ever really been done before, and then Hollywood was never the same. prequels (because they really do suck), they at least work to create their own, self-contained stories. They understand that for many people those films were the first Star Wars they'd get (before going through the series from Episode I to Episode VI) so they had to tell their story their way. The Emperor may be a bad dude in the original trilogy but these films find their own way to develop the character of Palpatine so that, when he twists and becomes evil, the moment is at least earned (in its own way).

If these Hobbit movies want to be obsessed with Sauron, that's fine, but Sauron has to tie into the story of the main characters, Bilbo and the dwarves, and he doesn't. He's a villain to menace the world but our heroes are completely divorced from his plot line (because Sauron wasn't in the original Hobbit novella and his story doesn't actually tie up until The Lord of the Rings). Spending so much time setting up a villain that doesn't matter to this trilogy divides the attention of the film and leaves the audience wondering why they should care.

Short answer: they really shouldn't. Their focus should be on Smaug because he's the villain we've been told about, the one we saw destroy the dwarven homeland at the start of the first movie, the one we already care about. The worst sin of the film, though, is that while it gives us Smaug, the named character in the subtitle, we don't actually get the big battle with him until the next film! What the hell is that. It leaves this movie feeling like all build up with no climactic fight (all tease and no climax). There is a big confrontation between the dwarves and the dragon, but it ends in a standoff and then the dragon flies away. We need more. We need the villain to die at the end of the movie (instead of at the start of the next, for some stupid reason). We need a complete story.

The way these films are divided up none of them tell truly complete chapters to the larger tale of The Hobbit. We're always looking to the next film, always waiting for the big climactic resolution that never comes. The film tries to drag us along, to make us care, but then if keeps what we want just out of reach, always saying, "just wait... it's coming." It's annoying and aggravating and it makes each film feel like a complete waste of time. 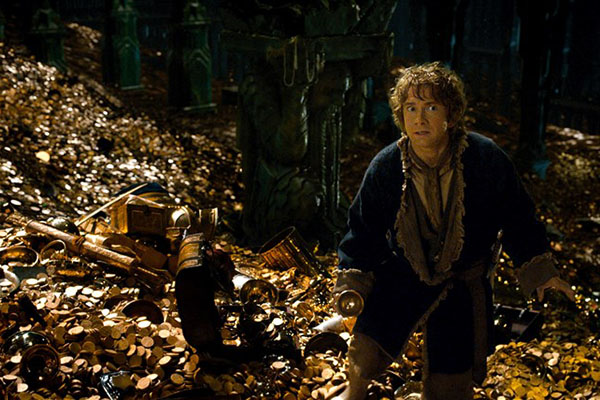 The studios wanted three more movies to milk The Lord of the Rings after the The Lord of the Rings managed to make a ton of money across its three films. But, again, we have a perfect illustration of the fact that these films really don't work as individual chapters of a trilogy. While this movie is better than the first film in the set, it's still weakened by the fact that it's an incomplete film, padded out by a bunch of content that doesn't relate to its main story (and is only there to setup a different trilogy we've already seen). It's messy and weird and just doesn't quite work.

But then, the biggest mess is yet to come. Are you ready for three hours of incoherent battle? Then you're going to love The Battle of the Five Armies...