I Will Enter Valhalla, Shiny and Chrome

And here we go, the whole reason I started doing a Mad Max series dive: I really just wanted to discuss Fury Road. Before we even get into the meat of the article I may as well note, up front, that I'm an unabashed fan of this movie. I think it's awesome, one of the best action movies ever made, and I can't understand why it didn't do better in theaters. 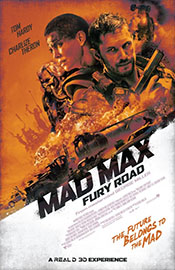 We Shall Ride Eternal on the Fury Road

Picking up sometime after the events of the previous movies (probably), we see Max (Tom Hardy this time around), a straggly, wasted shell of a man, staring out over the vast expanse of nothingness. Suddenly he leaps into his car and drives off as a pack of pursuit vehicles speed after him. They attack, he crashes, and soon he's taken prisoner at the compound of Immortan Joe (Hugh Keays-Byrne, returning from the first flick to play a new character), the crazed leader who rules his little patch of green among the wastes with an iron fist. He's a sadistic piece of work, one who views everyone under him as his property, including his many (unwilling) wives.

When Imperator Furiosa (Charlize Theron), driver of one of Joe's war rigs, goes off road and off mission, Joe soon learns that she's leading his wives on a plan of escape. He sends his war party (and all the war boys) out to chase after her. One of those war boys, Nux (Nicolas Hoult), suffering the effects of nuclear sickness, straps Max to his car as an unwilling "blood bag" (since Max, we learn, is a universal donor, Type O). Thus all the characters are in play and the movie can kick into essentially one long car chase as Furiosa, along with eventually Max, are pursued for the entire length of the movie by the war band, with the war boys always nipping at their tails.

Describing the plot of Fury Road essentially boils down to saying "here's what happens in the first 10 minutes, and then car chase". It's not hyperbolic to say that the film is an hour-and-a-half car chase -- that really is the whole of the movie, but the fact that the producers stick to it and really make it happen is part of why the movie works so well. Sure, there are quieter moments, times where the movie slows down and the characters can breathe, but the tension never really lets up. There is always a pursuit going on, always the threat of being caught, being killed, for all the characters involved. 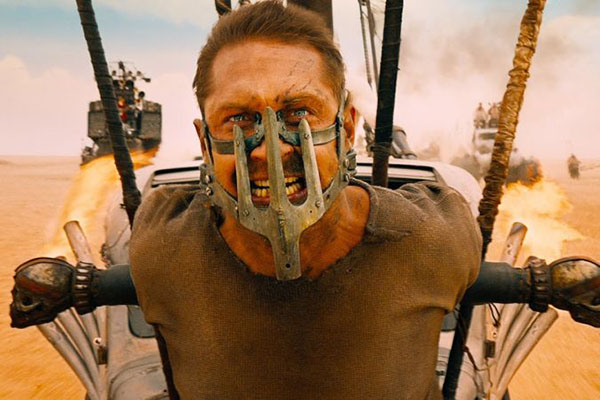 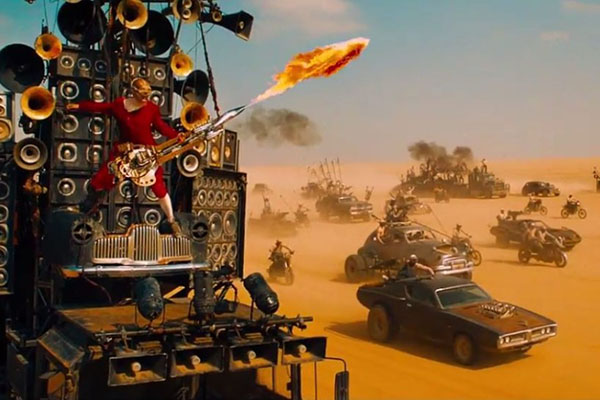 One long action sequence is one thing, but what's so impressive about how Fury Road handles it is that, apart from one obvious sequence early in the film (involving a massive sand storm), clearly all the action on screen is really happening. Fury Road boasts one of the largest collections of cars made for any action movie, with wild designs that are clearly meant to evoke the "made from scrap in a post-apocalyptic wasteland" setting, and each and every vehicle really works. They all drive, they all, largely, have fire spitting out of them at high speeds, and they will all smash into each other in glorious wrecks. And because it's all real, all done with the smallest amounts of CGI you'll see in any movie produced in the last 30 years, you feel every hit. The action has impact because it's all really happening as the film unfolds in front of you.

What really kicks the movie forward, what makes it such a compelling watch, is that the characters are so interesting. Through all the action, all the tension, the ceaseless push forward, we learn about the characters and come to view all of them as real people. Despite this being a Mad Max movie, Furiosa is arguably the main character of the piece, and we learn enough about her to really care what happens. Plus, it helps that she's play with some strength (and emotion) by Theron who inhabits this character in a way I haven't seen the actress do before. She'd go on to star in another fantastic action flick, Atomic Blonde, and based on those two movies alone (and the level of commitment she puts into her action roles), I will watch her in any action movie going forward.

While Max isn't really the main character (the best I'd give him his co-lead), Hardy still invests in the character. This Max isn't anywhere near as human as his previous appearances -- he's been hollowed out, struck with severe PTSD, and hit a level of rock-bottom the character didn't even get towards after the death of his family. If anything, I'd say that Hardy's willingness to play a version of Max so broken, to allow the lead character to not even be the lead in his movie (as opposed to other Hollywood stars that would demand a bigger part for their lead role) helps the film function even better. This is a team movie, with a cast of characters that all have to work together to survive, and you feel it each time one of them puts their life on the line and, especially, when they die.

Unfortunately, we also have hit upon part of the reason why the movie wasn't as big a success in theaters as it should have been. It has the story, the characters, and the spectacle to be an absolute blockbuster hit. It should have made over a billion (and we should have the first of the next three films Miller was planning in theaters now). Instead, the film recouped its money and made decent, but not great, bank, and sank down the charts as more of an also-ran in a stuffed Hollywood season. So what happened? 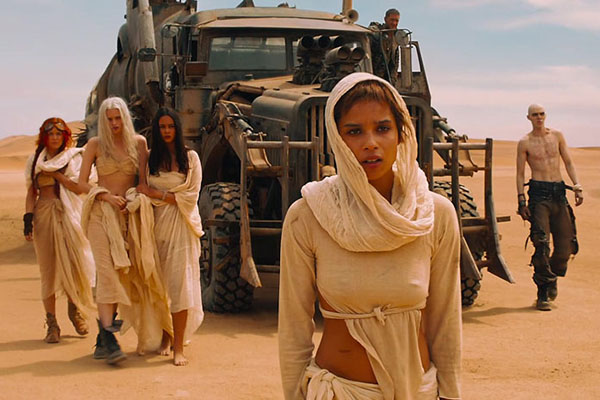 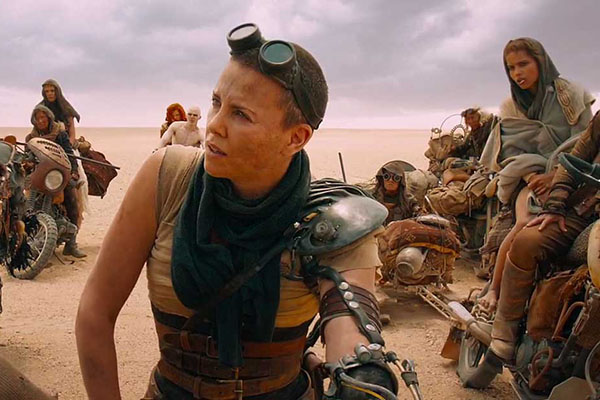 Well, as much as people might not want to admit it, the dumb men's-rights groups certainly took a chunk out of the box-office. These groups were up in arms over the fact that "a woman has the lead in our manly Mad Max movie!" They boycotted it because the film was "pro-feminist" (Max and Nux are the only male heroes amid over a dozen including the Furiosa, the wives, and a team of biker ladies called the Many Mothers they pick up along the way) and "anti-male" (all the villains in the film are dudes). They claimed that somehow the film wasn't a real Mad Max movie (depsite having the original creators writing/directing the flick). So they boycotted it.

And while the thought would be "what could a bunch of man-babies online do? There aren't that many of them, right?" You have to think about how a movie like this makes money. As pro-female as the movie is, the main demographic that will go see a smashy-smashy car-splosion flick are men. Getting women in to see what appears to be a "dude flick" can be hard for Hollywood, and while the trailers played up Theron in a lead role, it also played big on the action elements (which are absolutely stunning and needed to be showcased, no doubt). The female viewership was going to be depressed no matter what just do to the kind of movie it was. Then, when you factor on a zealous group of men not seeing it (and not seeing it over and over again, as nerds are want to do), you have a recipe for depressed ticket sales.

And yet, as Tom Breihan over on the AV Club said about Fury Road during his "History of Violence" series, the MRA guys that boycotted the movie didn't deserve this masterpiece. It's a visually stunning thrill-ride with something to say and the intelligence to say it all amongst the smashy-smashy action. It is, hands down, the best Mad Max movie of the series (absolutely destroying the seemingly fantastic Road Warrior while, at the same time, saying "Beyond Thunderdome? Never heard of it." It is, quite simply, the best action movie I've ever seen and if you can't enjoy it because you find it too "pro-women" then your priorities, your very humanity, is clearly out of whack.

Reportedly, George Miller (writer/director of the entire series) really wanted Fury Road to get a black and white release. I can't find if that was the only version he wanted to put out but it seems more likely that it would have been a limited theater release if it were to have happened (audiences don't tend to go out for black and white movies). Whatever the original plan, a black and white (titled "Black and Chrome") was eventually released on home media.

For the sake of the sake of this article (and because I hardly need much of an excuse to watch the movie), I popped in Black and Chrome to see if it made Fury Road better. Honestly, I'd say the results are mixed. In some sections the starkness of the black and white really allows some sections to glow with an ethereal quality, such as the times the war boys (who are painted up all in white) are on screen against shadowy backgrounds. The cyclone storm early in the movie also looked better, a little less glaringly CGI when rendered in shades of grey. 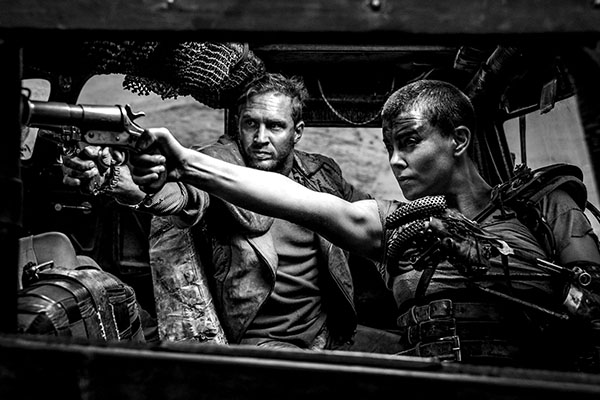 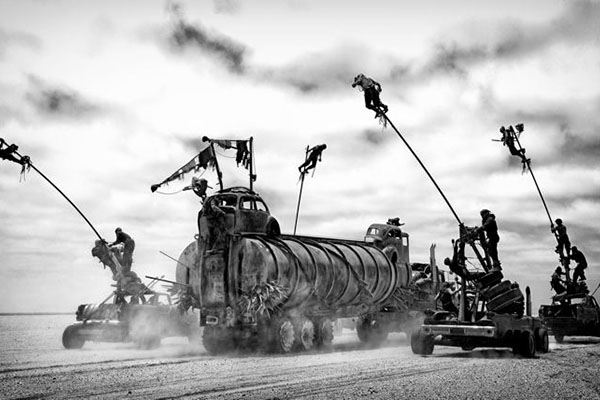 Other times, thought, sections suffered. There are a number of instances where the colors of the original edition scream out in their intensity and that blast of color doesn't carry over when it's grey on grey on grey. All the use of fire, for example, is vastly muted down, blunting their impact. There were a number of times where I'd wished they would have gone through with some leveling filters to adjust the contrast of the blacks and whites and make some sections pop out better.

Plus, weirdly, the couple of sequences that took place at "night" (which, really, were just sections with their blacks kicked up and a blue filter put across the otherwise day-time footage) where the black-and-white footage suddenly had a blue-ish cast. It's like they applied the black and white to the original footage but then let the nighttime footage filter run afterwards. These sections pulled me out of the experience since suddenly there's a bit of color to the experience.

Black and Chrome is an interesting idea and I can certainly see why the director was intrigued by it -- in some scenes it really does add to the movie. Overall, though, I prefer the original, full-color version of Fury Road.