Well That Was a Waste

The Hobbit: The Battle of the Five Armies

I noted in my review of the second film in The Hobbit trilogy, The Desolation of Smaug, how that film ends right when you'd expect the climax to begin: with Smaug, the sub-titular drag and motivator for this whole big quest, flying off to torch Lake Town and meet his eventual doom. Any sane film would end with the big Smaug confrontation but the second Hobbit elides that. For whatever reason Jackson and his team felt like that sequence needed to be treated as a cliffhanger, to dangle out and suck people back in for the third movie. Why would they do that? 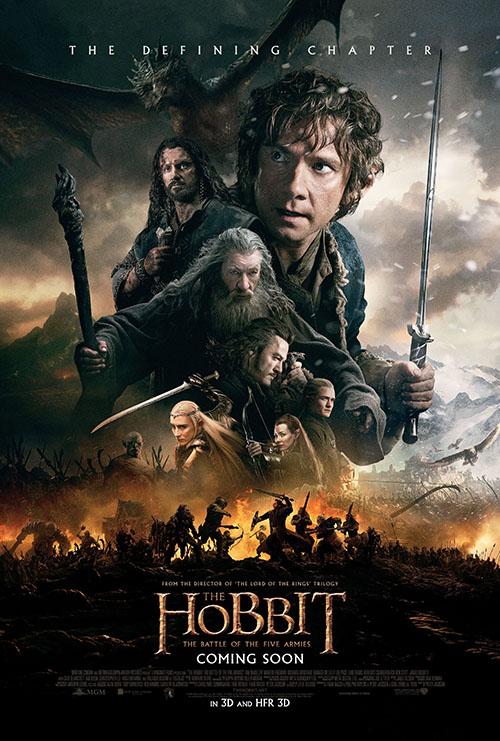 The answer, which seems pretty obvious when you watch the third film, is because without Smaug's sequence at the start of the film there's barely any story to carry the rest of the movie. The Battle of the Five Armies is a movie constantly struggling to draw things out, the make a feature length film out of what is, effectively, the denouement of The Hobbit. I'm not saying there couldn't be a viable story created from the recovery of Lake Town after their whole city is wiped out by Smaug, just that this film fails to make a convincing job of it.

The film operates as two long action sequences with a lot of pointless talking in the middle. Smaug, awoken at the end of the second movie, gets mad at the dwarves and Bilbo and decides to show his anger by torching Lake Town, killing all within. He flies to the nearby city, lays waste to everything he can and then, right before he takes a victory lap, is shot down by Bard (he of the magnificent Black Arror). Smaug is defeated but he's basically destroyed the town. Since the fair folk of Lake Town had an agreement with the dwarves for a share of the treasure lurking in the Kingdom Under the Mountain, they head there to talk to the dwarves and get the money they'd need to rebuild.

Only problem is that Thorin, King Under the Mountain, has changed now that he's sitting on top of all that gold. Where once he saw friends he now sees greedy enemies. He rebuffs Bard, reneging on their deal, calling the humans greed thieves. The wood elves, too, have a claim on the treasure seeing as the dwarves had a stash of starlight gems that the elves consider their birthright. With Thorin sealed up in his cavern the elves and humans declare war on the dwarves. Reinforcements from other parts come to aid the dwarves, which only inflames tensions. The battle seemed like it would rage hard and leave all sides depleted, but then an army of orcs arrives. The armies unify against these new foes and, well, then we have a long and drawn out war that just goes on and on.

The first big issue with this movie is that the whole middle section of the story is pointless and stupid. Yes, Thorin is a proud man, someone that is hard to befriend. But once you're in his trust, once he considers you kin, he would never turn his back on you. If he owes a debt he pays it, and if someone he knows is in need, he helps them. That's the Thorin we've seen for two films and its the Thorin that is missing from this movie completely. The film essentially has to rewrite a central character just to make the whole middle wheel-spinning work but the whole time I was watching it I sat there thinking, "what the hell is going on? This makes no sense from the perspective of the characters we know." 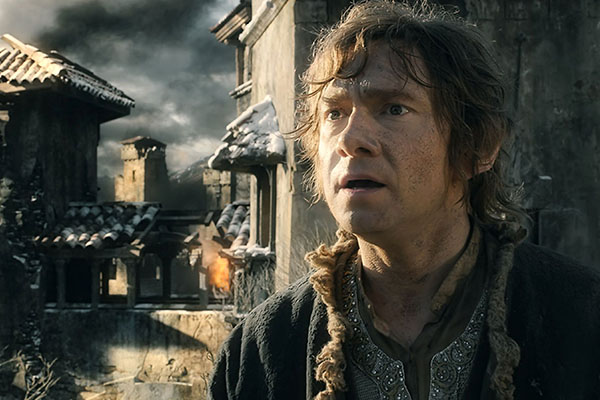 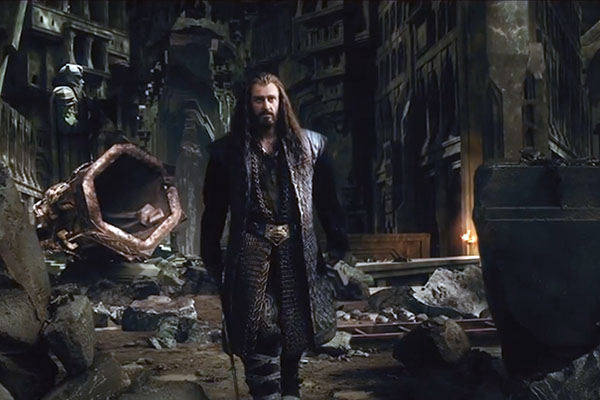 The movie tries to play off Thorin's sudden heel turn as his falling into greed and madness. The treasure is cursed, so the movie tells us, and Thorin has fallen under its spell. And I could believe that if anyone else in the party were also blinded by the gold and gems, but the rest of the group keeps commenting that Thorin's heel turn makes no sense, that there's no point into fighting a pointless war over a treasure hoard so big no one in the party could ever spend even 1/100th of it in their lifetime. It's an insane amount of money and everyone but Thorin seems to understand this. Share it, make allies, and all could be merry.

Of course, without this whole middle section the movie would be about an hour, in total (and that's before we try to edit out all the other useless little bits of story that add nothing to this trilogy). The film is padded and then padded again just to get it up to a proper runtime which only speaks to the fact (which I've noted before) that these three films really should have been two movies, not three. Pared down and reorganized, An Unexpected Journey should have ended on the outskirts of Lake Town while The Desolation of Smaug should have comprised the heroes sneaking through Lake Town, finding the dwarf mine, waking up Smaug, Smaug's attack on the town, and then the Battle of the Five Armies. The way it's organized here the producers run out of story before they're even into the last film and have to make shit up as they go along.

Well, and they pad out the story with even more Sauron setup. There's a lot of talk about the dark foe, about how he's rebuilding his power, about how he's getting ready to try and take over Middle-earth again. We even have a bit of a battle between him, Gandalf, Galadriel, and their allies. None of this matters. If you've watched The Lord of the Rings trilogy then you know Sauron's story (and his ultimate fate). If you haven't seen those films you're just going to be annoyed that Sauron, who eats up so much of the B-plot across all these stories, isn't even a major factor in the tale of The Hobbit. He's a side plot, an also ran, someone there just to make the movie two-and-a-half hours. It's awful.

The fact is that this movie needed to be shorter (or part of the second film entirely). There's not enough story to fill, and most of that's there doesn't make sense for the characters. Why does Thorin get so greedy? Why does Thauriel, a character we barely know, fall in love with Kili, a character she barely knows? Why should we care? Why do we spend so much time on some random toadie serving Bard when he's a sniveling ass and, in the end, does absolutely nothing for the story? It's all pointless and dumb, a big waste of time. 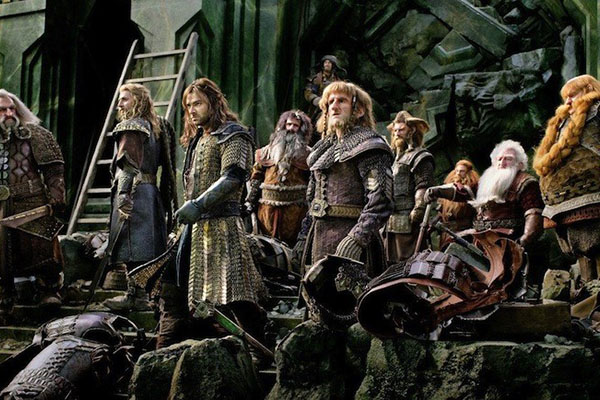 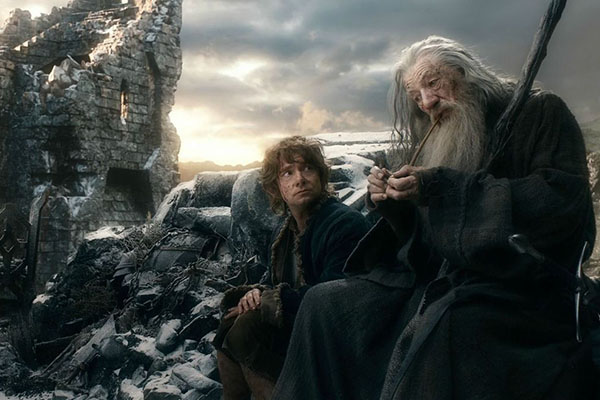 Even the action itself is awful because it's all fake and CGI. I complimented the second film for having actually decent special effects, but this film is a big step back for the trilogy. Once again everything looks fake, like it was all films with a few actors in front of a green screen trying their hardest to invest in everything going on when even they can't see any of it. Nothing looks real, it all look bad and plasticy and fake, and what stunts we are given have a weird, floaty, airless quality.

Simply put there is absolutely nothing to invest in here, from the characters to the special effects to the action. It's a total waste of time, start to finish, and if it could have been condensed down to 30 minutes or so (which, all things considered, it doable given the material), these movies would have been so much better. But we have to live with The Battle of the Five Armies the way it is, a half-baked conclusion to the trilogy that goes out like a sad, limp bag of gas. The Hobbit deserved better.