So You Say You Need a Burglar?

As a child of the 1980s, my first exposure to The Lord of the Rings wasn't via the books (which were long tomes that very few of my friends even tried to read) or even the original Hobbit book, but via the 1977 Rankin-Bass production, The Hobbit. My family had a copy of it on Betamax (that they recorded off TV, so we got to fast-forward through commercials), and I know I saw it a couple of times just from that tape. Then, of course, teachers had us watch it practically once a year because it was short -- and hour and fifteen minutes -- and got us to shut up. 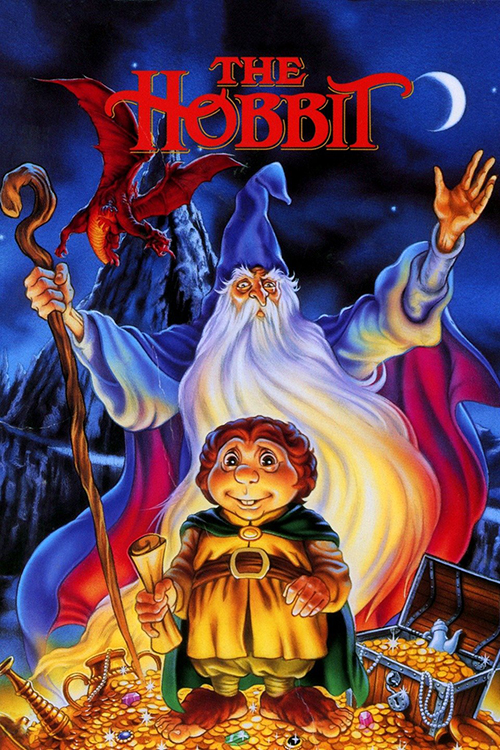 And, if this were the only version of the Lord of the Rings universe, (aka the Middle-earth Saga as Warner Bros. likes to call it now) this film would easily stand on it's own. But the film at this point doesn't exist in a vacuum having to compete with six other much more well known films based on the saga (all of them directed by Peter Jackson to... varying quality levels) this film seems positively quaint now. It's slower, it's sillier, and it was made on a vastly reduced budget. And yet, oddly, it's still the best adaptation of The Hobbit released on U.S. shores (the occasional Norwegian or Russian low-budget production notwithstanding).

If you've read the books, or seen the (overly long, seemingly unending) Peter Jackson version of The Hobbit then you know the basics of this story. Gandalf the Grey, a wizard (who, in this film, dresses in blue despite his name) shows up at the doorstep of our hobbit, Bilbo Baggins, looking to hire a burglar Along with the wizard ride thirteen dwarves, an unlucky number, and they need a fourteenth to ensure the party is lucky. So, for whatever reason, Gandalf decides Bilbo is the guy to hire.

After securing Bilbo's signature onto their contract, the party of fourteen (plus Gandalf, from time to time) head out into the wilds of Middle-earth. Their goal: the old mines of the dwarves which once were the center of the Dwarvish Kingdom until an evil dragon, Smaug, settled into the mines and claimed the vast treasure as his own, scattering the dwarves to the winds. Now, this band, lead by Thorin, heir to the Throne Under the Mountain, want to reclaim their lands (and gold) and become a kingdom once more. And along they way they will encounter all kinds of troubles (trolls, goblins, ill-tempered elves), find grand treasures (like the One Ring), and maybe have to fight in an epic war, all before the journey is over. A grand adventure indeed.

The thing that holds the 1977 The Hobbit back, ironically, is just how fast it moves through all the events of the story. I saw ironically because the biggest complaint about the newer trilogy of movies (from 2012-2014) was that The Hobbit didn't need to be split apart and expanded into three films, and that's true. But at the same time this slight little animated adventure barely covers any of the events in detail. In essence Bilbo and the dwarves show up at a location, something bad happens, and then fifteen seconds later they all find an escape. The danger of any of the situations lands because the movies doesn't have time to devote to it before it's off to the next scene. 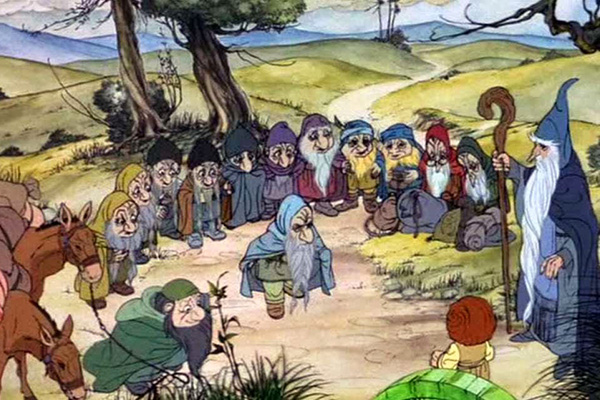 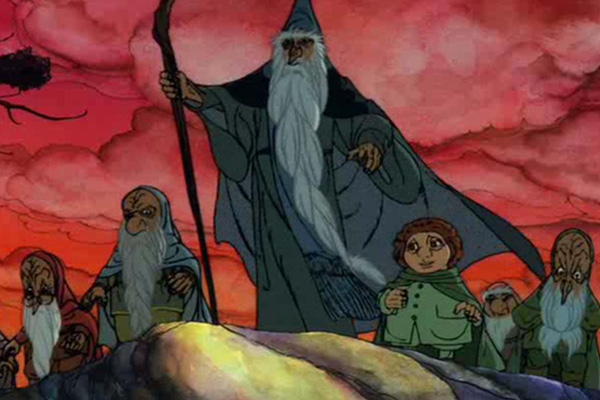 And yet, despite this, the movie also manages to feel slow. That's because so much of the film is watching the characters walk from place to place (not actually doing anything) while the soundtrack sings about the adventure. This happens a lot, and you'll hear the three or so (not at all memorable) tracks over and over again as the movie tries to use the tunes to punctuate moments. It takes the film, already slight in its details, and drags it out to fill a two-hour time-slot on TV (which, again, works out to an hour-fifteen). The movie both feels too long and too short in equal measure, an amazing feat all things considered.

The only time the film manages to get the pacing just right is during the sequence with Golum. Golum, as he's featured here, is a creepy amphibian living in a cave (although, as those of us that have gone through the whole Saga know, there's more to him than that). When Bilbo stumbles onto Golum (after falling into a pit and ending up in Golum's underground lake), the hobbit finds a shiny little ring, one that, when he finally puts it on, makes him invisible. The interchange between hobbit and Golum, the discovery of what the ring can do, and Bilbo's tricks to elude the creature, all come at a brisk but not to fast pace. It's really well done. If only more of the film could have followed that formula and just let the story breathe properly.

And then there's the fact that often the film simply glosses over details and the characters simply shrug and move on. Gandalf comes looking for a burglar but why did he chose Bilbo? Was there a past? Was Bilbo once actually a burglar, or was it simply that Gandalf had a premonition? And then there's the One Ring which is such an important item in the later epic but no one (not even Gandalf who should know better) says one word about it. There's a big story behind the One Ring but this film doesn't have any time for it.

The fact is that, with just a little tweaking this film could be really good. The animation on display is solid, a really quirky but detailed style that suits the fantasy setting of the story. Each creature featured, from the goblins to the trolls, Golum, human, and elf, all look different and interesting. The movement is crisp, the action clean, and everything about the film's artistic craft shows that the animators cared about the product they were making. It's a solid feast for the eyes (considering the age it was made in and the limitations of the animation techniques available). 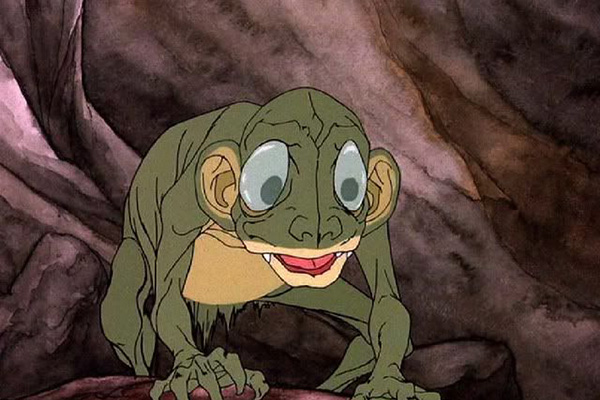 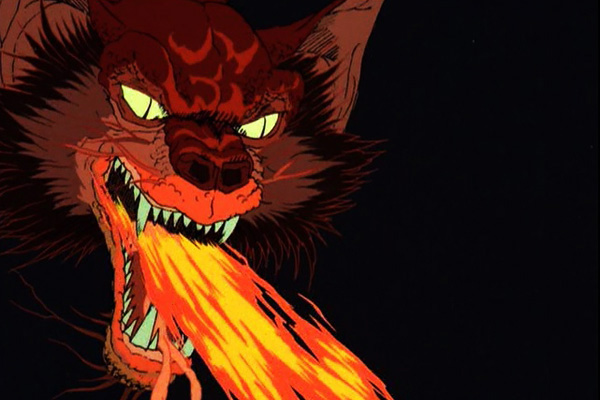 As I noted, I watched this a number of times growing up and, back then, I really enjoyed the film. It was different, a tale you couldn't find anywhere else, and the adventure seemed epic enough for me at the time. But going back and watching it now, with how far animation has come and how the storytelling style has changed in the last four decades, this film feels absolutely antiquated. It doesn't have the power to the way it used to; it feels plodding when once it seemed amazing.

And yet, it's still easy to say that this film is the best adaptation of The Hobbit we've yet seen. That should underline how much the Peter Jackson trilogy based on the same material managed to bungle everything about this tale. For all the flaws of the 1977 animated take, the Rankin-Bass The Hobbit is positively a masterpiece in comparison to the trilogy yet to come...