He Did Say He'd Be Back

It's interesting to note that while Asteroid G covered nearly all of the TerminatorIs it a series about a future nuclear war and the survivors of the aftermath? Is it a series of chase movies set in the present day? Is it a series about time travel? That fact is that the Terminator series is all of those concepts. The mash-up of genres and ideas shouldn't work, but the films have proven adept at mixing into a heady series unlike any other. series years ago, the one film we never actually reviewed was the one held up as the masterpiece of the run: Terminator 2: Judgment Day. While the original Terminator is rightly considered a classic, it was anywhere near the phenomenon that T2 became. It was horror movie dressed up with an interesting sci-fi twist, but there was certainly more to the setting that could be explored. 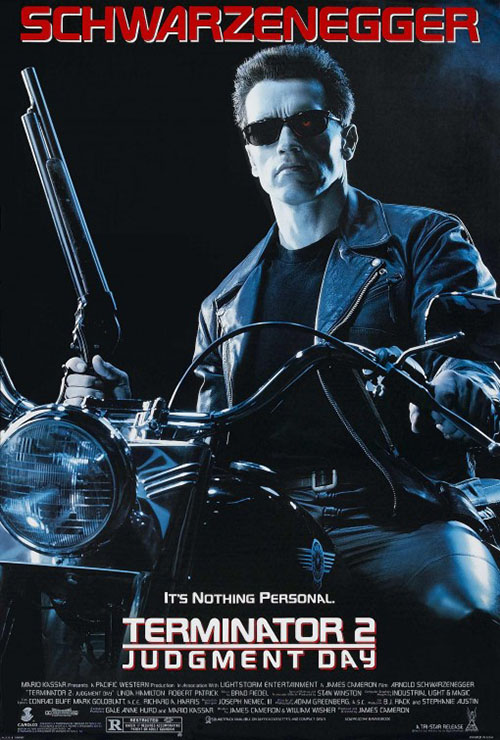 Following up the original, 1991's Terminator 2, pushes the action further, ditching the horror movie vibe for all out war instead. This time there were two Terminators battling for the life of John Connor, with more elaborate set-pieces, bigger effects, and a lot more action in the process. It is everything you expect from a Hollywood sequel -- the first film, only bigger -- but in the hands of James Cameron, it works. As if we should have had any doubt at the time as Cameron had already proved he knew how to do bigger and better sequel bombast with the other action masterpiece of his career, Aliens.

Set in 1995, 10 years (give or take) after the events of the first film, we learn that after the first Terminator was sent back to kill Sarah Connor (and failed), a second Terminator was also sent to the past, this time to take out John Connor when we was still young. As before, a protector was also sent to aid Connor, and they would have to work together to defeat the evil Terminator and save the future. It's a simple conceit, just like in the first film, but the movie uses the sci-fi trappings to give a the simple chase-story mechanics depth.

The one thing many people complain about is that the trailer for the film seemingly spoils a big twist of the first act of the movie, namely that the protector for this film is a reprogrammed T-800, the same model as the evil Terminator from the first movie. Reprising his role as a Terminator (although obviously not the same Terminator), Arnold Schwarzenegger came in to give his robot some heft. This does help to sell the twist as the first film already taught us to fear this guy. The film does try to play up the twist further, having the opening events of this sequel mirror the first film -- Arnie warps in first, followed by the second time traveler (played by Robert Patrick) who, seemingly, is following in Kyle Reese's footsteps. If we take it as just face value, obviously we know who is good and bad.

Except that the twist never really played for me, even when I didn't know who was supposed to be the good guy or the bad guy. Patrick's character seemed over the tip in his violence, with a malicious edge to his performance. Meanwhile, Arnie's character seems softer from the outset (before he even pairs up with John Connor), doing a lot of damage to people but never actually killing anyone. Even before the two Terminators meet up and fight it out for John Connor, we have trouble thinking of the T-800 as a bad guy. And since the film tells us, from the beginning, that one of these two time travelers is a protector for John, the movie basically spoils its own first-act twist. 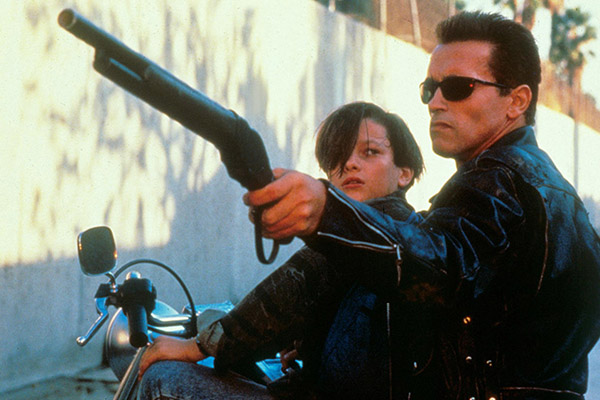 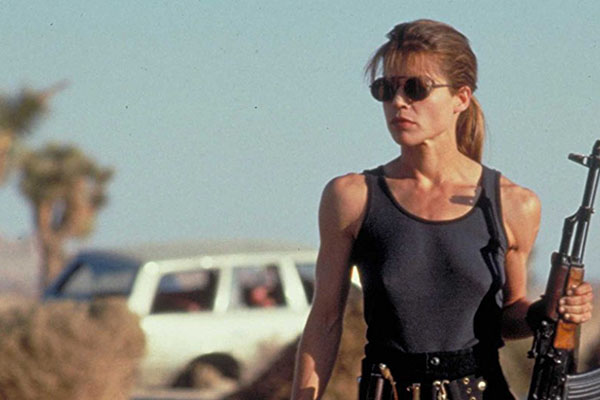 Not that I mind, really, because as soon as that "twist" comes and goes, we are dropped right into the action. We immediately get a great gun fight that shows the next big twist of the formula: Robert Patrick's Terminator is a new model, a T-1000 made of polymimetic liquid metal. He can heal all damage taken, mimic anyone he touches, and can create metal objects, such as swords and crowbars, from his own body. Harder to kill and much more dangerous, this new breed of Terminator ups the danger even further.

Conceptually, the T-1000 is a great character. As designed her perfectly one-ups the T-800, both in design and possibilities. We already knew the T-800 was a fierce and unstoppable killing machine, one already clearly out-matching the humans he went after. But by dropping a T-1000 into the mix, the movie said "remember that T-800, that guy we're now giving to the heroes for free? Yeah, he's already obsolete, so good luck with that."

While I wouldn't consider Terminator 2 a horror movie, certainly not like the first movie was playing with that genre, there are elements of horror still in the flick, all thanks to the T-1000. He racks up quite a body count, to be sure, but it's what he can do -- mimicking people -- and the way he does it that adds elements of body horror to the film. He is, in essence, a version of The Thing, a sci-fi terror that can mimic anyone and be anything, and the people that he clones are then killed. The last act plays up the body horror even further (especially in the director's cut), with a damaged T-1000 having problems keeping itself together, losing form and substance in a hot foundry. The T-1000 is a terror transplanted into this action movie bonanza.

Credit, naturally, is due to Robert Patrick for his performance. He gets to play the T-1000 as a kind of alien, shifting his way coldly through the populace. Although Patrick doesn't have the physical presence of Schwarzenegger (so few people do), he makes up for it with an on-screen viciousness to rival even the original T-800 from the first movie. Although the T-1000 doesn't get as much screen time as the first T-800 (by design, to help him blend in and surprise the viewers when he shows up), Patrick dominates the scenes he's given. 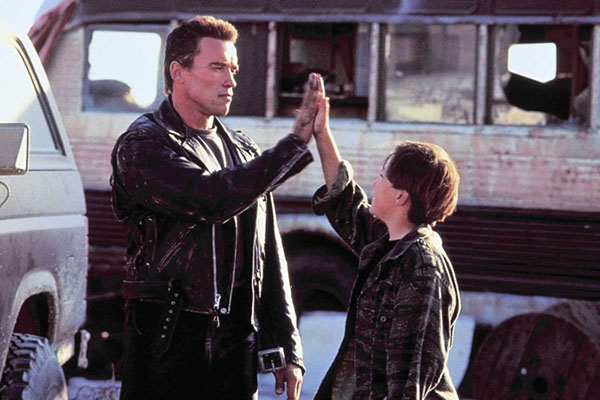 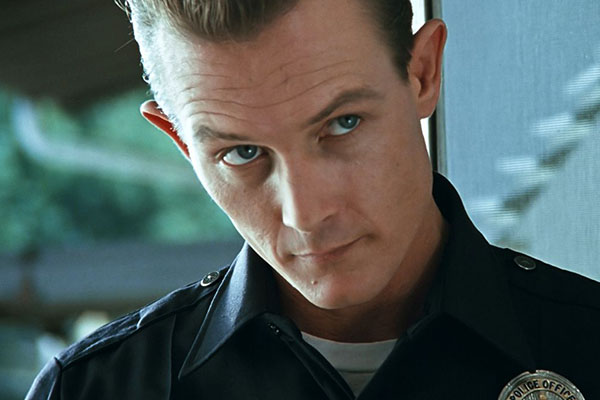 Schwarzenegger is good as the T-800, although as I alluded to in my review of the first movie, I feel like the character is less robotic, and this less interesting, in this film. The Terminator was Schwarzenegger star-making role, but by the time T2 rolled around, the actor had a persona and that bled through into the character. Sure, the extended version of the movie tries to explain this away by having the T-800's learning chip get activated, allowing him to study humans and learn better ways to adapt. Still, Arnie's Terminator now smiles, cracks jokes, and pals around with John. It's makes him a better buddy for the younger character, but it also robs the T-800 of his menace.

Linda Hamilton returns for this film as well, reprising her role as Sarah Connor. This version of her character is certainly more interesting that the scared Final Girl she played in the first film. She's hollowed out, constantly living with PTSD from the events of the first movie. Hamilton plays her fantastically, crafting a believable character, one who you believe is still living with the horrors she's seen (and still expects to see once the world ends on Judgment Day).

The weak-link of the primary leads, really, is John Connor. Because of the conceit of the film, Connor has to be a pre-teen in this story. Any child actor they got to play the role would naturally be hated by a portion of the audience (see also Jake Lloyd in Star Wars: Episode I). Edward Furlong gets a lot of crap for his performance as the, at times, quite obnoxious John Connor, but I don't blame the actor. He did a good job with the role as written. The problem, really, is that the film realistically depicts a 10 year old who not only had to grow up with a crazed mother, but then also was dumped into the foster care system when his mother was arrested (and sent to a mental institution because she swears killer robots from the future are after them). A kid raised like that would probably be a little shit, and Furlong plays that perfectly.

Put another way, a movie about John Connor would be a whole lot better if John Connor wasn't in it. The first film build the character up as this ideal, a perfect military leader who will one day save all of humanity. Any actor would struggle to portray that John Connor (see also: every other Terminator sequel in the franchise). John works better as someone briefly glimpsed, not the main character of the series because the character can never live up to the mythos. 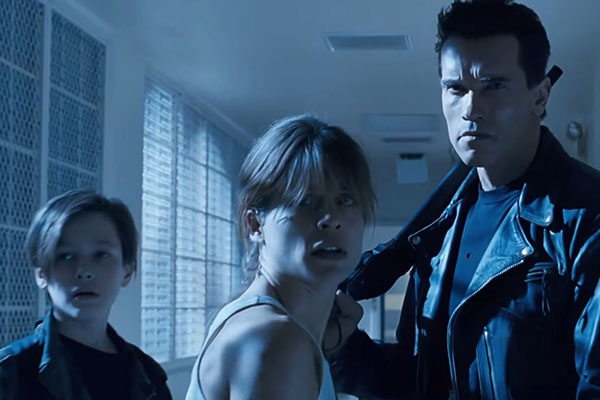 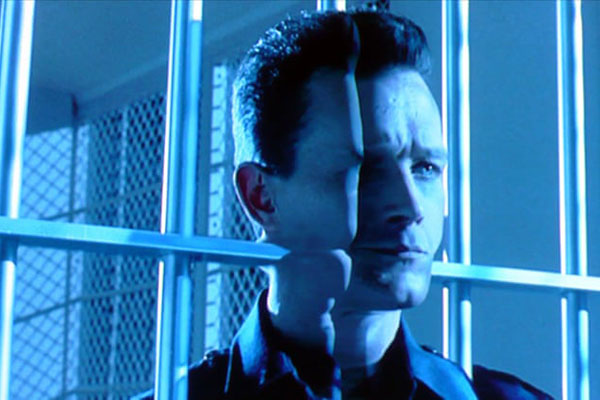 Characters aside, though, what we really come in to the film to see is the action, and Terminator 2 delivers in spades. From that opening motorcycle chase (and the creepy build-up leading to it), to a later on-foot (and then in-car) chase at the mental hospital, and then the big, bombastic climax that is essentially one, long action sequence for the entire last act of the movie, Terminator 2 rarely lets up. Its slowest sections come in the middle act, which much of the story of the film is really dumped out. That middle section is a tad exposition heavy, but it doesn't drag the film down too far. There's plenty of thrills (done with a lot of practical effects) to carry the movie and really deliver the action spectacle we crave.

Terminator 2: Judgment Day isn't perfect, although it does come pretty close. In an ideal world, my version of T2 would strip down some of the middle act, downplay the "family bonding" between John and the T-800 a bit (so that the Terminator keeps some of its edge), while still preserving all the extended action from the first and third acts. Still, even with its flaws, T2 can be rightly held up as a masterpiece. It takes a simple chase movie and crafts for it a sequel that improves just about everything while delivering more. Very few of the projects in the franchise are able to reach the heights set by this first sequel. And, as well see with the next flick, maybe the franchise really should have just stopped at two movie...